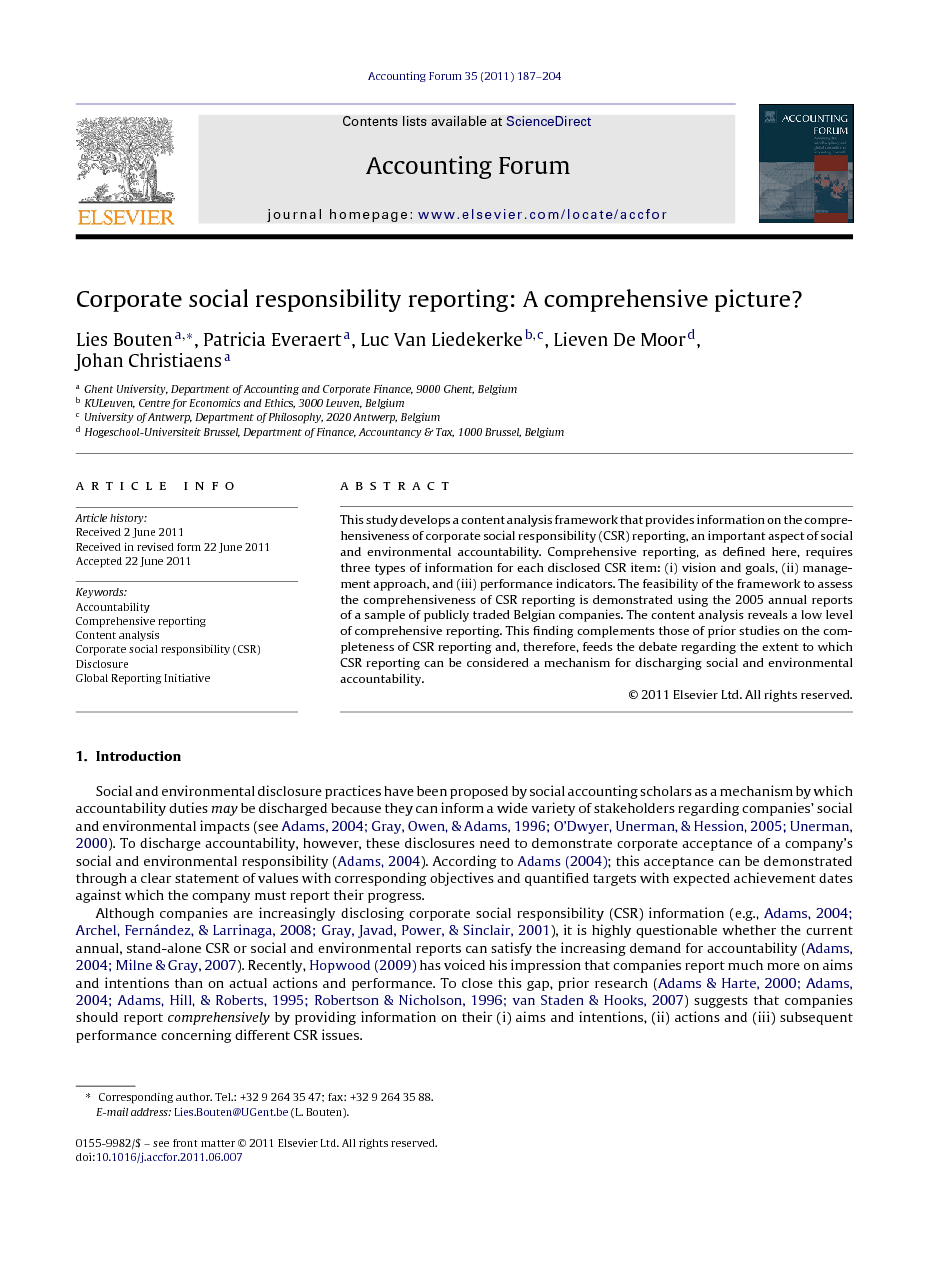 This study develops a content analysis framework that provides information on the comprehensiveness of corporate social responsibility (CSR) reporting, an important aspect of social and environmental accountability. Comprehensive reporting, as defined here, requires three types of information for each disclosed CSR item: (i) vision and goals, (ii) management approach, and (iii) performance indicators. The feasibility of the framework to assess the comprehensiveness of CSR reporting is demonstrated using the 2005 annual reports of a sample of publicly traded Belgian companies. The content analysis reveals a low level of comprehensive reporting. This finding complements those of prior studies on the completeness of CSR reporting and, therefore, feeds the debate regarding the extent to which CSR reporting can be considered a mechanism for discharging social and environmental accountability.

Social and environmental disclosure practices have been proposed by social accounting scholars as a mechanism by which accountability duties may be discharged because they can inform a wide variety of stakeholders regarding companies’ social and environmental impacts (see Adams, 2004, Gray et al., 1996, O’Dwyer et al., 2005b and Unerman, 2000). To discharge accountability, however, these disclosures need to demonstrate corporate acceptance of a company's social and environmental responsibility (Adams, 2004). According to Adams (2004); this acceptance can be demonstrated through a clear statement of values with corresponding objectives and quantified targets with expected achievement dates against which the company must report their progress. Although companies are increasingly disclosing corporate social responsibility (CSR) information (e.g., Adams, 2004, Archel et al., 2008 and Gray et al., 2001), it is highly questionable whether the current annual, stand-alone CSR or social and environmental reports can satisfy the increasing demand for accountability (Adams, 2004 and Milne and Gray, 2007). Recently, Hopwood (2009) has voiced his impression that companies report much more on aims and intentions than on actual actions and performance. To close this gap, prior research (Adams and Harte, 2000, Adams, 2004, Adams et al., 1995, Robertson and Nicholson, 1996 and van Staden and Hooks, 2007) suggests that companies should report comprehensively by providing information on their (i) aims and intentions, (ii) actions and (iii) subsequent performance concerning different CSR issues. This paper provides a content analysis framework to explore whether companies report CSR information in a comprehensive fashion. ‘Comprehensive reporting’, as interpreted in this paper, requires companies to disclose three types of information for each disclosed CSR item: (i) vision and goals (VG), (ii) management approach (MA) and (iii) performance indicators (PI). These three information types are based on Robertson and Nicholson (1996) and on Vuontisjärvi (2006), and they refer to disclosures of (i) stated aims and values, (ii) specific actions and (iii) actual performance in a quantitative way. For instance, for the CSR item ‘emissions’, this approach means that a company discloses, e.g., (i) the aim to reduce emissions by a specified quantity, (ii) the specific actions to realize this intention and (iii) the actual reduction achieved. If a company reports in this way, it is possible to obtain a clearer view of the company's acceptance of its social and environmental responsibility, allowing the presented information to be placed in context (Adams, 2004). As such, comprehensive reporting is one of the conditions that need to be fulfilled to demonstrate accountability (e.g., Adams and Harte, 2000 and Adams, 2004). Many academic papers (e.g., Al-Tuwaijri et al., 2004, Cormier et al., 2005, Gray et al., 1995 and Wiseman, 1982) have looked at whether CSR disclosures are qualitative or quantitative. However, to our knowledge, no attempts have been made to systematically assess whether companies report comprehensively on specific CSR items. This paper addresses this limitation by developing a content analysis framework that reveals the comprehensiveness of CSR reporting by capturing not only (i) the disclosed CSR items but also (ii) the accompanying information types (VG, MA and PI). Due to these different information types, the proposed content analysis structure is among the first to capture the contextualization of CSR disclosures. By providing an indication of both the completeness (i.e., number of disclosed CSR items) and the comprehensiveness of CSR reporting, the developed content analysis structure gives a clearer indication of the extent to which an organization is accountable to its stakeholders (Mathews, 1997). To demonstrate the feasibility of the developed framework in assessing the two dimensions of CSR reporting previously indicated, a content analysis is conducted on the 2005 annual reports of a sample of Belgian listed companies. The main reason for choosing this sample is that, while reporting patterns have been explored in many different national contexts, to our knowledge, no academic study to date has focused on Belgium (see Thomson, 2007). The 2005 annual reports are selected for analysis because these reports were the most recently available annual reports at the start of this research project.1 The discussion section indicates that the insights provided by the 2005 reports are still relevant today. Furthermore, these 2005 findings are briefly discussed in relation to current knowledge of the companies’ CSR performance. Without a doubt, Belgian companies have significant environmental and social impacts. For example, a recent OECD report (2007) revealed that the Belgian industrial sector still puts pressure on the air, soil, water and other natural resources. Although the environmental impact of Belgian companies has declined in recent years (MIRA-T, 2008 and OECD, 2007), Belgian companies have been confronted with their environmental backlog from the past and have been required by both public and government agencies to clean up contaminated soil and watercourses. Furthermore, the Belgian public has always been very concerned about companies’ social impacts, especially regarding employment. This concern reflects the fact that Belgium is a country with a long tradition of social dialogue and strong union representation. Unsurprisingly, therefore, the survey of the Federation of Enterprises in Belgium (FEB) (2007) of Belgian companies revealed that companies tend to focus on the labor aspect of CSR.