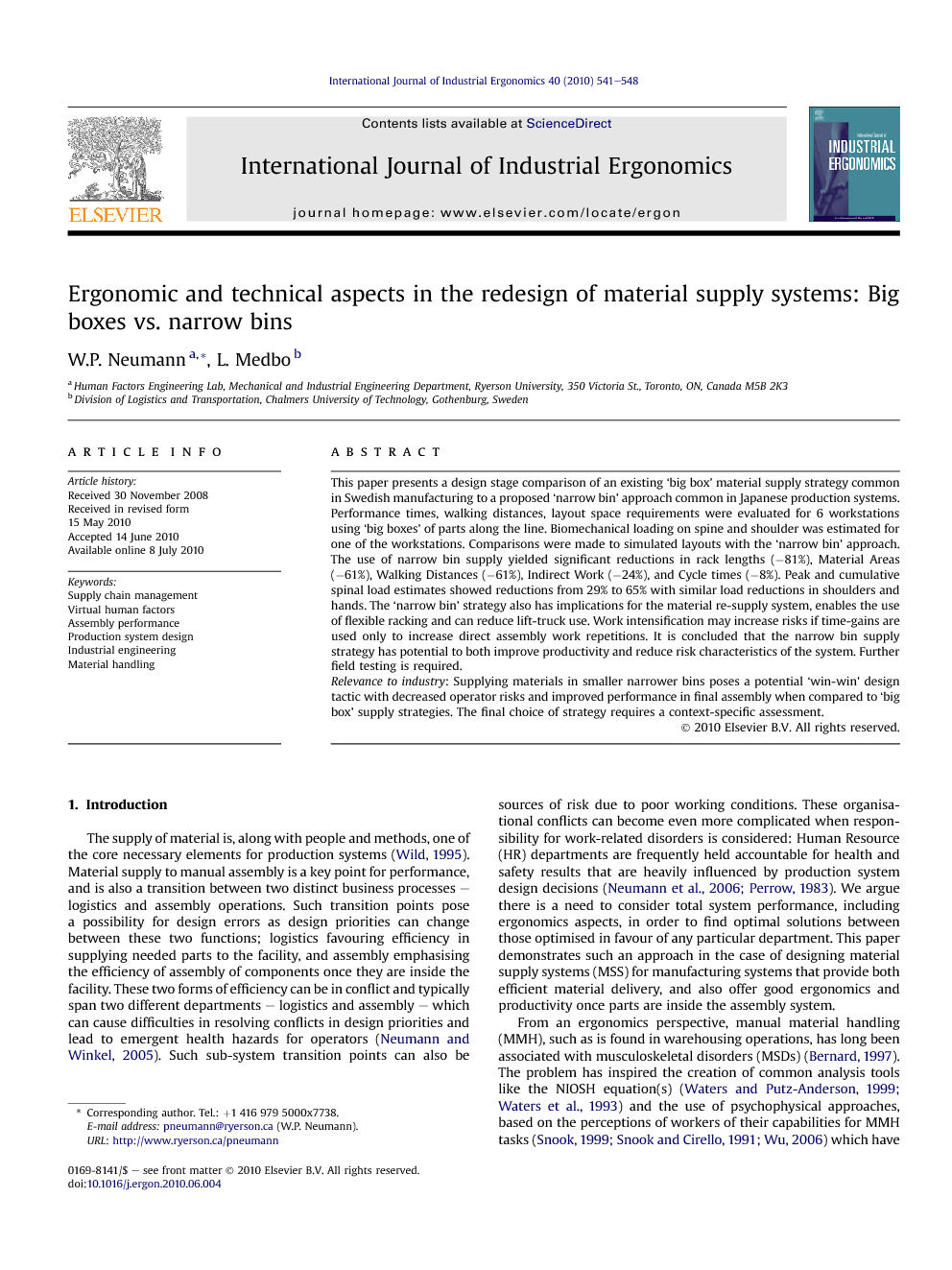 This paper presents a design stage comparison of an existing ‘big box’ material supply strategy common in Swedish manufacturing to a proposed ‘narrow bin’ approach common in Japanese production systems. Performance times, walking distances, layout space requirements were evaluated for 6 workstations using ‘big boxes’ of parts along the line. Biomechanical loading on spine and shoulder was estimated for one of the workstations. Comparisons were made to simulated layouts with the ‘narrow bin’ approach. The use of narrow bin supply yielded significant reductions in rack lengths (−81%), Material Areas (−61%), Walking Distances (−61%), Indirect Work (−24%), and Cycle times (−8%). Peak and cumulative spinal load estimates showed reductions from 29% to 65% with similar load reductions in shoulders and hands. The ‘narrow bin’ strategy also has implications for the material re-supply system, enables the use of flexible racking and can reduce lift-truck use. Work intensification may increase risks if time-gains are used only to increase direct assembly work repetitions. It is concluded that the narrow bin supply strategy has potential to both improve productivity and reduce risk characteristics of the system. Further field testing is required. Relevance to industry: Supplying materials in smaller narrower bins poses a potential ‘win-win’ design tactic with decreased operator risks and improved performance in final assembly when compared to ‘big box’ supply strategies. The final choice of strategy requires a context-specific assessment.

The supply of material is, along with people and methods, one of the core necessary elements for production systems (Wild, 1995). Material supply to manual assembly is a key point for performance, and is also a transition between two distinct business processes – logistics and assembly operations. Such transition points pose a possibility for design errors as design priorities can change between these two functions; logistics favouring efficiency in supplying needed parts to the facility, and assembly emphasising the efficiency of assembly of components once they are inside the facility. These two forms of efficiency can be in conflict and typically span two different departments – logistics and assembly – which can cause difficulties in resolving conflicts in design priorities and lead to emergent health hazards for operators (Neumann and Winkel, 2005). Such sub-system transition points can also be sources of risk due to poor working conditions. These organisational conflicts can become even more complicated when responsibility for work-related disorders is considered: Human Resource (HR) departments are frequently held accountable for health and safety results that are heavily influenced by production system design decisions (Neumann et al., 2006 and Perrow, 1983). We argue there is a need to consider total system performance, including ergonomics aspects, in order to find optimal solutions between those optimised in favour of any particular department. This paper demonstrates such an approach in the case of designing material supply systems (MSS) for manufacturing systems that provide both efficient material delivery, and also offer good ergonomics and productivity once parts are inside the assembly system. From an ergonomics perspective, manual material handling (MMH), such as is found in warehousing operations, has long been associated with musculoskeletal disorders (MSDs) (Bernard, 1997). The problem has inspired the creation of common analysis tools like the NIOSH equation(s) (Waters and Putz-Anderson, 1999 and Waters et al., 1993) and the use of psychophysical approaches, based on the perceptions of workers of their capabilities for MMH tasks (Snook, 1999, Snook and Cirello, 1991 and Wu, 2006) which have also been combined with physiological signs to help determine MMH demands under specific circumstances (Li et al., 2009). Epidemiologic research suggests that, in the case of low back pain, disorders are related to both peak biomechanical load and accumulated loading exposures (Norman et al., 1998), both of which are influenced by MMH activities. Case study research has illustrated how the design of material supply strategies and workstation layouts influences operators’ biomechanical loading and thus their injury risk (Neumann et al., 2006). In this paper we address MMH issues at final assembly operations in auto sector manufacturing systems. This study is positioned between two distinct industrial engineering perspectives, namely those of Sweden and Japan. In this comparison the authors draw on their experience visiting production systems and meeting with system engineers in both countries in order to highlight potential differences in approach available for the design of future systems that are both highly competitive and sustainable from the operator’s perspective. Sweden has traditionally had to deal with long customer and supplier-side transportation distances. Consequently, there has been an emphasis on efficiency of the logistics system in transporting goods between facilities. In contrast, the Japanese tradition has focussed more on the efficiency of the assembly operations with an emphasis on maximising direct assembly work time for operators (Monden, 1998). As a result the ‘Swedish tradition’ has emphasised the use of large crates (boxes) for the efficient transportation of parts between and within facilities, and these crates are often then placed directly along the production line for operators to retrieve parts from; often referred to as line stocking – an approach also widely applied in North American manufacturing facilities. We call this the ‘Big Box’ (BB) material supply strategy. The Japanese approach, on the other hand, favours the use of narrow bins placed close together on racks. This ‘Narrow Bin’ (NB) approach can give the operator access to many different parts, and part variants, in relatively little space (see Fig. 1, detailed description follows). We present here a comparison of these two material supply strategies in terms of productivity and ergonomics aspects.

The design of the material supply system affects both the physical workload of production operators and the performance of the system. The use of narrow bins in material supply was shown in virtual assessment to reduce the space needed for material supply, the time spent picking up and carrying components, and the physical workload of the operator for this indirect work. While such a strategy may also provide flexibility advantages and reduced costs and hazards from lift-trucks, it also permits a more nuanced replenishment schedule which must also be factored into any final strategy selection. This study provides an example of how design alternatives can be explored ‘virtually’ using data from existing systems and simple biomechanical tools. It also illustrates how human and technical factors interact in strategic choices for production system and supply chain designs to affect both the MSD risk of the operator and the performance of the system. This analysis suggests that the application of narrow bins in material supply should be further explored in field trials.