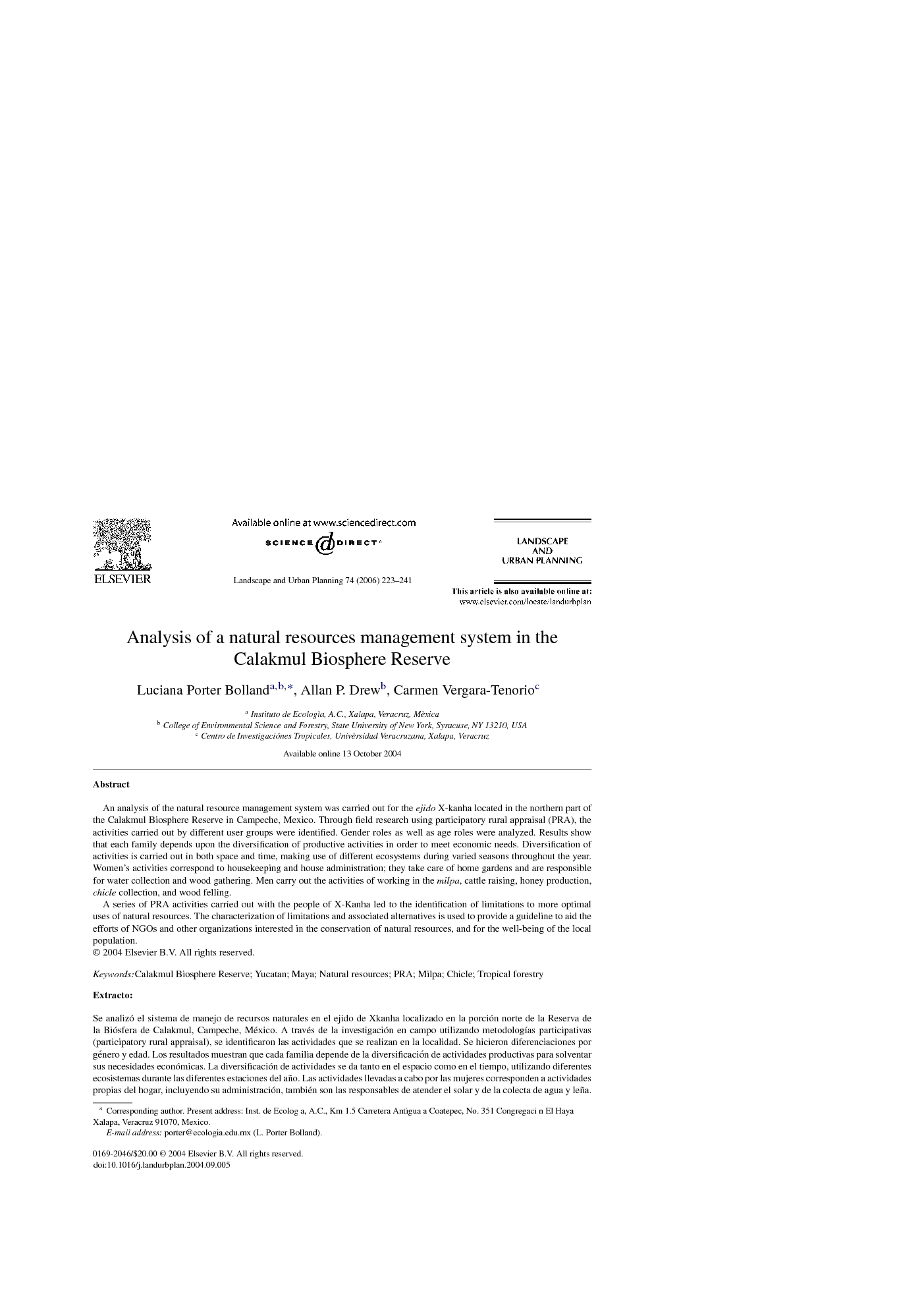 An analysis of the natural resource management system was carried out for the ejido X-kanha located in the northern part of the Calakmul Biosphere Reserve in Campeche, Mexico. Through field research using participatory rural appraisal (PRA), the activities carried out by different user groups were identified. Gender roles as well as age roles were analyzed. Results show that each family depends upon the diversification of productive activities in order to meet economic needs. Diversification of activities is carried out in both space and time, making use of different ecosystems during varied seasons throughout the year. Women's activities correspond to housekeeping and house administration; they take care of home gardens and are responsible for water collection and wood gathering. Men carry out the activities of working in the milpa, cattle raising, honey production, chicle collection, and wood felling. A series of PRA activities carried out with the people of X-Kanha led to the identification of limitations to more optimal uses of natural resources. The characterization of limitations and associated alternatives is used to provide a guideline to aid the efforts of NGOs and other organizations interested in the conservation of natural resources, and for the well-being of the local population.

Many tropical landscapes can be regarded as mosaics of forest patches that have “recovered” from different disturbances in which human societies have played a major role (Browder, 1996). Actually, in most “protected” tropical forests, archeological, historical and ecological evidence exists showing a high density of human population in the past and sites of continuous occupation over many centuries, and also intensively managed and constantly changing environments (Gómez-Pompa and Kaus, 1992). In that way, forest patches making up the tropical landscape are dynamic entities, where wildlife and vegetation are controlled and influenced by groups of interacting biotic and abiotic factors, of which historic and present land-use patterns are of great importance (Lyon and Horwich, 1996). Understanding the role of current human activity in this landscape is needed to understand how forests are changing over time and across space (McIntosh, 1981) and is critically important for the management and conservation of tropical forests. Tropical forests in Mexico have been estimated to be amongst the highest in deforestation rates worldwide (Cairns et al., 1995). The causes of deforestation in Mexico are multiple, with forest conversion to agricultural uses, particularly cattle ranching, the leading factor. Gómez-Pompa and Kaus (1990) attribute the root causes of deforestation in Mexico not to population growth or shifting cultivation, but to government subsidies and other incentives that promote timber extraction, settlement by landless farmers from other regions, and conversion of formerly forested lands to pastures. New approaches to tropical forestry must be developed that ensure the conservation of biodiversity. These approaches should be based on the actual needs of the local people and their development must begin with analyses of past and present tropical forest management, and of the interaction between tropical forests and local cultures (Gómez-Pompa and Bainbridge, 1995). The Calakmul Biosphere Reserve, found in the Yucatan Peninsula, is the largest protected area of tropical forests in Mexico. It represents an ecological corridor between the humid tropics of Guatemala and the Lacandon region of southern Mexico, and the northern region of the Yucatan Peninsula and the Caribbean. It is rich in biodiversity as well as in cultural inheritance. This area has been inhabited for long periods of time by the Maya people, who in the past were able to support high population densities and at the same time protect certain forest species. Today's social conditions entail rapid changes, e.g., new settlements, opening of roads and communication networks, all of which need to be taken into account when seeking improved conservation of the area. There are many organizations (governmental and non-governmental) now working in the Calakmul Biosphere Reserve area providing assistance for development and conservation efforts. According to Chapin (1991), development programs in general have been characterized by lack of coordination among funders and technical assistance agencies, poor understanding of the needs and concerns of rural people, and confusion over short- and long-term objectives. To reverse this trend, it is important to give attention to the development of organizational forms built on small, locally based initiatives (Marsden, 1994). A proposed approach for forest conservation in the Calakmul region has been the development of organizational capacity of communities to better manage their own forests through a diversified management plan that includes timber and non-timber forest products, as well as sustainable agriculture (Acopa and Boege, 1998). This strategy calls for an understanding of the current forms of organization within these communities in order to better address their strengths and limitations. It is from this perspective that we analyzed the natural resources management system of X-kanha, a Maya community in the northern part of the Calakmul Reserve. Our main objective was to identify problems and limitations that affect the socioeconomic setting, limiting economic development and the community's long-term ability to manage their natural resources. The research at X-kanha was intended to aid the efforts of the NGO, Oxfam-COMADEP,1 which was actively working in the study area. It was also intended to serve as an example of strengths and limitations that favor or hinder forest conservation and sustainable development of similar communities throughout the Maya Forest. Participatory rural appraisal (PRA) was used for conducting field research, seeking information and analysis about the resource management system and the socioeconomic characteristics of the specific ejido. PRA is a method used as a learning process which enables outsiders to gain information and insight from rural people and about rural conditions. PRA is an approach and a dynamic set of methods, in which the main objective is to learn directly from the people, and in which one of its goals is to yield direct benefits to the community (Chambers, 1992). The underlying philosophy is that the solutions for natural resources management problems are often found within the local community, and that feasible solutions need to be answers to shared perspectives and problems from all user groups, in and out of the community ( WRI-GEA, 1993, Davis-Case, 1989 and Molnar, 1989).