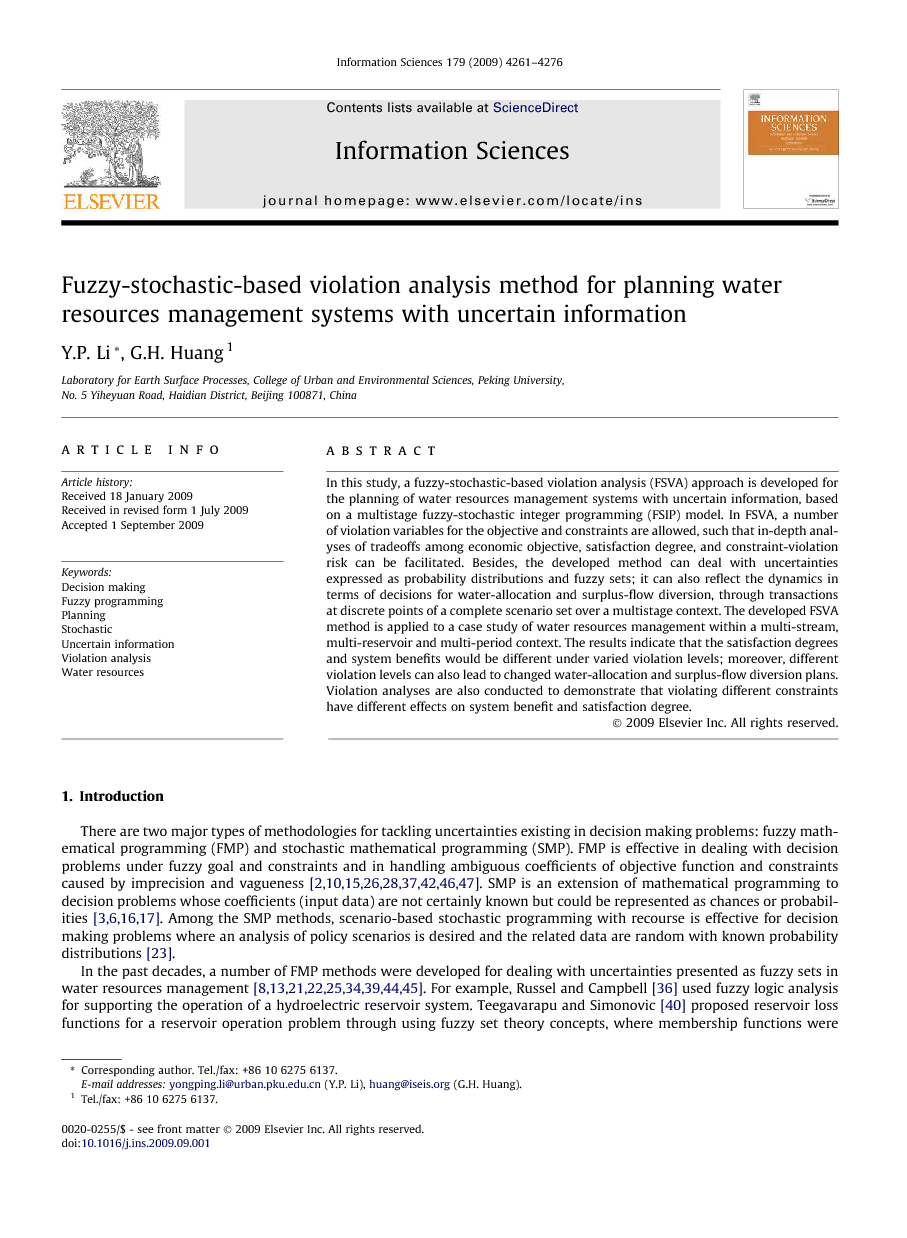 In this study, a fuzzy-stochastic-based violation analysis (FSVA) approach is developed for the planning of water resources management systems with uncertain information, based on a multistage fuzzy-stochastic integer programming (FSIP) model. In FSVA, a number of violation variables for the objective and constraints are allowed, such that in-depth analyses of tradeoffs among economic objective, satisfaction degree, and constraint-violation risk can be facilitated. Besides, the developed method can deal with uncertainties expressed as probability distributions and fuzzy sets; it can also reflect the dynamics in terms of decisions for water-allocation and surplus-flow diversion, through transactions at discrete points of a complete scenario set over a multistage context. The developed FSVA method is applied to a case study of water resources management within a multi-stream, multi-reservoir and multi-period context. The results indicate that the satisfaction degrees and system benefits would be different under varied violation levels; moreover, different violation levels can also lead to changed water-allocation and surplus-flow diversion plans. Violation analyses are also conducted to demonstrate that violating different constraints have different effects on system benefit and satisfaction degree.

There are two major types of methodologies for tackling uncertainties existing in decision making problems: fuzzy mathematical programming (FMP) and stochastic mathematical programming (SMP). FMP is effective in dealing with decision problems under fuzzy goal and constraints and in handling ambiguous coefficients of objective function and constraints caused by imprecision and vagueness [2], [10], [15], [26], [28], [37], [42], [46] and [47]. SMP is an extension of mathematical programming to decision problems whose coefficients (input data) are not certainly known but could be represented as chances or probabilities [3], [6], [16] and [17]. Among the SMP methods, scenario-based stochastic programming with recourse is effective for decision making problems where an analysis of policy scenarios is desired and the related data are random with known probability distributions [23]. In the past decades, a number of FMP methods were developed for dealing with uncertainties presented as fuzzy sets in water resources management [8], [13], [21], [22], [25], [34], [39], [44] and [45]. For example, Russel and Campbell [36] used fuzzy logic analysis for supporting the operation of a hydroelectric reservoir system. Teegavarapu and Simonovic [40] proposed reservoir loss functions for a reservoir operation problem through using fuzzy set theory concepts, where membership functions were used to represent the decision maker’s preferences in the definition of shape of loss curves. Bender and Simonovic [4] proposed a fuzzy compromise approach for the planning of water resources systems under uncertainty; it allowed a family of possible conditions to be reviewed, and supported group decisions through fuzzy sets designed to reflect collective opinions and conflicting judgments. Jairaj and Vedula [20] optimized a multi-reservoir system through using fuzzy mathematical programming method, where uncertainties existing in reservoir inflows were treated as fuzzy sets. Ben Abdelaziz et al. [5] developed a fuzzy chance-constrained goal programming approach for a reservoir operation problem, where uncertainties were treated as fuzzy sets and probabilities. Mujumdar and Sasikumar [31] developed a fuzzy optimization model for the seasonal water quality management of river systems, where the occurrence of low water quality was treated as a fuzzy event and randomness associated with the water quality indicator was linked to this fuzzy event using the concept of probability of a fuzzy event. El-Baroudy and Simonovic [12] proposed three new fuzzy reliability measures for reliability analysis of water resource systems; they included (i) a combined reliability-vulnerability index, (ii) a robustness index, and (iii) a resiliency index. Akter and Simonovic [1] proposed a multiobjective programming model based on the fuzzy set theory and fuzzy logic for flood management in the Red River Basin, Canada; three stakeholder inputs, including scale (crisp), linguistic (fuzzy), and conditional (fuzzy), were analyzed to obtain aggregated inputs expressed as fuzzy expected values. Teegavarapu and Elshorbagy [41] proposed a fuzzy mean squared error measure to evaluate the performance of time series prediction models in water resources, where membership functions derived from a number of modeler preferences could be easily aggregated to obtain a single integrated membership function. Nasiri et al. [32] proposed a fuzzy multiple-attribute decision support expert system for dealing with the uncertainties surrounding water quality index making problem. Nevertheless, the main limitations of the FMP methods remain in their difficulties in tackling uncertainties expressed as probabilistic distributions in a non-fuzzy decision space. As a result, a number of stochastic programs with recourse were developed for water resources management in response to the above deficiencies [14], [18], [23], [27], [29], [30], [35], [38] and [43]. Among them, Watkins et al. [43] proposed a multistage scenario-based stochastic programming model for planning water supplies from highland lakes, where dynamics and uncertainties of water availability (and thus water-allocation) could be taken into account through generation of multiple representative scenarios; however, the issue of flood management was ignored. Maqsood et al. [30] advanced an interval-parameter fuzzy two-stage stochastic programming method for the planning of water resources systems under uncertainty; however, this method could not adequately reflect the dynamic variations of system conditions for problems with sequential structures. Li et al. [27] developed an inexact multistage stochastic integer programming (IMSIP) method for supporting decisions of water-allocation and surplus-flow diversion within a single reservoir system. In the IMISP, techniques of interval-parameter programming (IPP) and multistage stochastic programming (MSP) were incorporated within an integer programming (IP) framework to address uncertainties expressed as discrete random variables and intervals. However, IMSIP was incapable of tackling uncertainties presented in terms of fuzzy sets. Moreover, IMSIP had difficulties in tackling a system with multiple streams and multiple reservoirs where joint-probabilistic uncertainties exist in terms of water availabilities as well as their diversions. Such dual uncertainties (i.e. randomness and fuzziness) could lead to more complexities in water-allocation among multiple spatial units that were of interactive and dynamic relationships. Therefore, a fuzzy-stochastic-based violation analysis (FSVA) approach will be developed in response to the above challenges, through coupling fuzzy mathematic programming (FMP) with multistage stochastic programming with recourse (MSP). The developed FSVA method will be able to deal with dual uncertainties expressed as probability distributions and fuzzy sets; it can also reflect the dynamics in water-allocation and surplus-flow diversion, through transactions at discrete points of a complete scenario set over a multistage context. Moreover, a number of violation variables for the objective and constraints will be introduced into the modeling formulation; this will help generate a range of decision alternatives with varied tradeoffs between environmental and economic objectives and between system optimality and reliability. A case study will then be provided for demonstrating how the developed method will support the planning of water-allocation and surplus-flow diversion within a multi-stream, multi-reservoir and multi-period context. The paper will be organized as follows: Section 2 describes the development process of the FSVA method; Section 3 provides a case study of water resources management to demonstrate applicability of the developed method; Section 4 presents result analysis and discussion; some conclusions are drawn in Section 5.

In this study, a violation analysis approach has been developed for planning water resources management system associated with uncertain information, based on a fuzzy multistage stochastic integer programming (FSIP) model. The developed method can deal with dual uncertainties expressed as probability distributions and fuzzy sets; it can also reflect the dynamics in terms of decisions for water-allocation and surplus-flow diversion, through transactions at discrete points of a representative scenario set over a multistage context. A number of violation variables for the objective and constraints are introduced, such that in-depth analyses of tradeoffs among economic objective, satisfaction degree, and constraint-violation risk can be facilitated. A number of violation analyses have been conducted to investigate the effects of violating the objective and constraints on system benefit and satisfaction degree. The results indicate that potentially useful information has been obtained; they can help generate a number of alternatives under various system conditions. The FSIP method handles uncertainties through constructing a set of scenarios that are representative for the universe of water availability conditions. With such a scenario-based approach, the resulting mathematical programming model could become too large to be applied to large-scale real-world problems. Moreover, many water resources management problems are complicated by the need to take adequate account of persistence in hydrological records. Therefore, conditional probabilities need to be handled for quantifying water availability, particularly over a multi-stream and multi-reservoir context; this may lead to non-linearity in system responses and raise major problems for the linear assumption in the FSIP (i.e. two random variables for stream inflows are assumed to take on discrete distributions and to be mutually independent). Another complexity is associated with the reflection of various environmental and socio-economic concerns related to the water resources management (e.g. social, economic, technical, legislational, institutional and political issues, as well as environmental protection and resources conservation). Many post-modeling analyses such as multi-criteria decision analysis, group decision making, and public survey will need to further be performed in order to improve the applicability of the generated solutions.