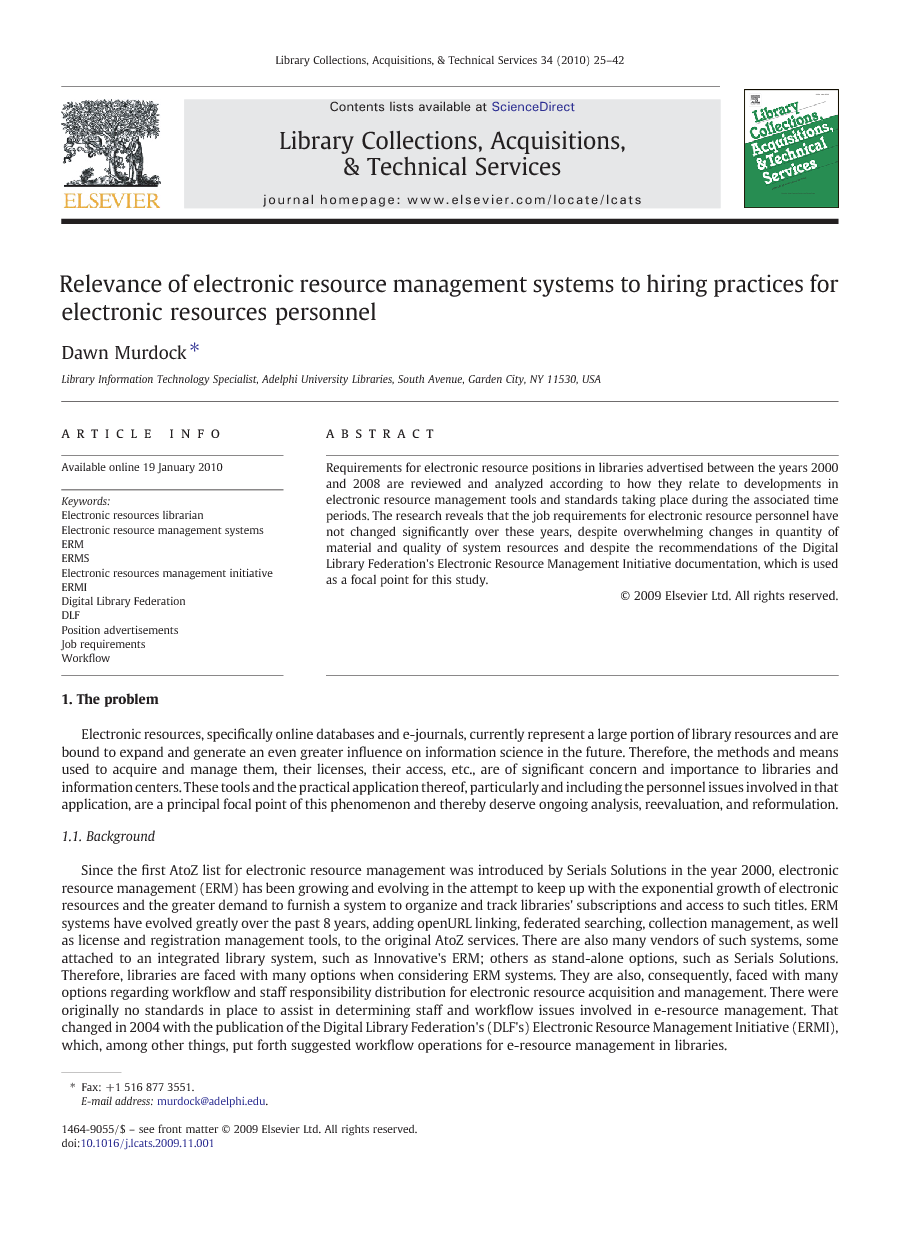 Requirements for electronic resource positions in libraries advertised between the years 2000 and 2008 are reviewed and analyzed according to how they relate to developments in electronic resource management tools and standards taking place during the associated time periods. The research reveals that the job requirements for electronic resource personnel have not changed significantly over these years, despite overwhelming changes in quantity of material and quality of system resources and despite the recommendations of the Digital Library Federation's Electronic Resource Management Initiative documentation, which is used as a focal point for this study.

Electronic resources, specifically online databases and e-journals, currently represent a large portion of library resources and are bound to expand and generate an even greater influence on information science in the future. Therefore, the methods and means used to acquire and manage them, their licenses, their access, etc., are of significant concern and importance to libraries and information centers. These tools and the practical application thereof, particularly and including the personnel issues involved in that application, are a principal focal point of this phenomenon and thereby deserve ongoing analysis, reevaluation, and reformulation. - Background Since the first AtoZ list for electronic resource management was introduced by Serials Solutions in the year 2000, electronic resource management (ERM) has been growing and evolving in the attempt to keep up with the exponential growth of electronic resources and the greater demand to furnish a system to organize and track libraries' subscriptions and access to such titles. ERM systems have evolved greatly over the past 8 years, adding openURL linking, federated searching, collection management, as well as license and registration management tools, to the original AtoZ services. There are also many vendors of such systems, some attached to an integrated library system, such as Innovative's ERM; others as stand-alone options, such as Serials Solutions. Therefore, libraries are faced with many options when considering ERM systems. They are also, consequently, faced with many options regarding workflow and staff responsibility distribution for electronic resource acquisition and management. There were originally no standards in place to assist in determining staff and workflow issues involved in e-resource management. That changed in 2004 with the publication of the Digital Library Federation's (DLF's) Electronic Resource Management Initiative (ERMI), which, among other things, put forth suggested workflow operations for e-resource management in libraries. Concurrent with the birth of electronic resources was the conception of a specialized library position, often times known as the Electronic Resources Librarian and also as Electronic Resources Manager, and other variations of the two titles. Additionally, some libraries responded by creating combination position titles, such as Electronic Resources/Systems Librarian, so as to expand somewhat comparable skill sets of existing professionals. Specialized e-resources positions were being invented in an attempt to gain control over this new phenomenon; however, much of the tasks in such job descriptions still reflected traditional library responsibilities. At first, with e-resources in their infancy, it may not have been extraordinary to expect this kind of multitasking. However, particularly in the past few years, the overall numbers of available e-resources increased steadily and eventually began to outweigh print resources in new acquisitions as well as superimpositions. - Conceptual assumptions In light of these changes, it seems reasonable that institutions continuing to rely on a specialized e-resource staff member should be eliminating as many requirements superfluous to ERM as possible in order to allow for greater attention to the expanding demands of the morphing world of electronic resources. Therefore, one might be inclined to question whether advertisements for e-resource personnel continue to include categories of responsibility nonspecific to e-resources. The ERMI does not propone the existence of a specified Electronic Resources Librarian or variation thereof. Rather, by this researcher's estimation, it exemplifies the incorporation of e-resource management into existing personnel systems. Assuming that developing ERM systems were to adhere to the criteria that this report set forth for such development, as it is supposed that they have, the implementation of the workflow outlined therein could be presumed feasible. It is now 4 years hence, and a reasonable time to speculate over the prevalence of the ERMI guidelines in the e-resource workflow management of libraries. Do we see more or fewer advertisements for specialized e-resource personnel since then? If we do see comparable numbers of advertisements in recent times, is there any indication that these libraries are indeed employing ERM systems? - Research questions Based on the above speculation, the research questions implicated here are as follows: 1) Do recent advertisements for e-resource personnel continue to include categories of responsibility nonspecific to e-resources? 2) Do we see more or fewer advertisements for specialized e-resource personnel since the release of the DLF's ERMI? If we do see comparable numbers of advertisements in recent times, is there any indication that these libraries are indeed employing ERM systems? - Importance of the study The findings of the research will, of course, be of concern to those considering specialization in electronic resources management. Additionally, it should be of some interest to all library and information studies students, based on the likelihood that they will need to have at least some exposure to and contact with electronic resource management. It could also serve as incentive for further dialogue regarding ERM and associated workflow issues among library directors and decision makers.