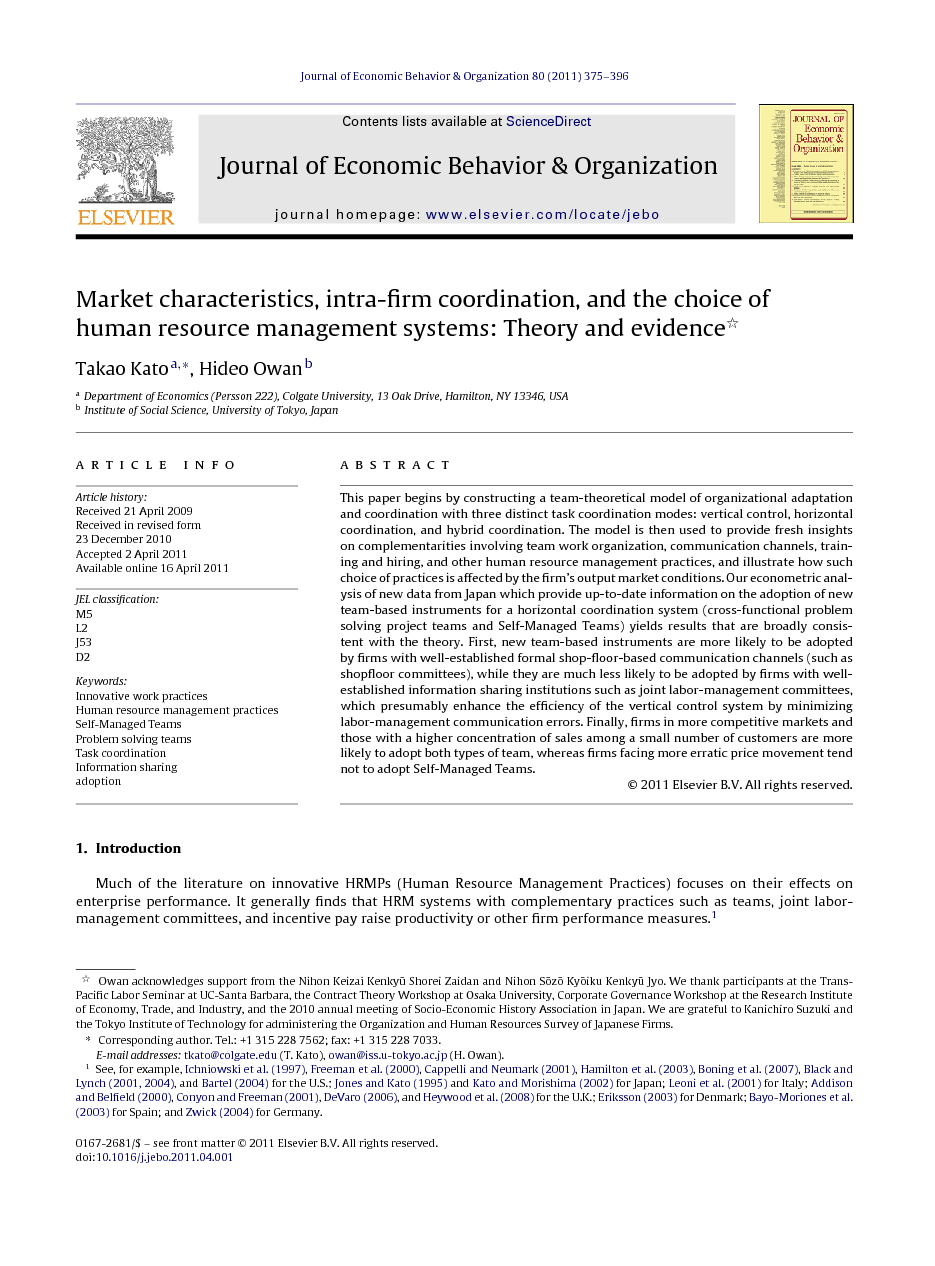 This paper begins by constructing a team-theoretical model of organizational adaptation and coordination with three distinct task coordination modes: vertical control, horizontal coordination, and hybrid coordination. The model is then used to provide fresh insights on complementarities involving team work organization, communication channels, training and hiring, and other human resource management practices, and illustrate how such choice of practices is affected by the firm's output market conditions. Our econometric analysis of new data from Japan which provide up-to-date information on the adoption of new team-based instruments for a horizontal coordination system (cross-functional problem solving project teams and Self-Managed Teams) yields results that are broadly consistent with the theory. First, new team-based instruments are more likely to be adopted by firms with well-established formal shop-floor-based communication channels (such as shopfloor committees), while they are much less likely to be adopted by firms with well-established information sharing institutions such as joint labor-management committees, which presumably enhance the efficiency of the vertical control system by minimizing labor-management communication errors. Finally, firms in more competitive markets and those with a higher concentration of sales among a small number of customers are more likely to adopt both types of team, whereas firms facing more erratic price movement tend not to adopt Self-Managed Teams.

This paper has explored theoretically and empirically a potentially important yet oft-neglected interplay between task coordination within an organization and the structure of the organization and HRMP bundling. In so doing, we have also provided fresh insights on linkages between a firm's output market characteristics and its choice of HRMP system, for a firm's market conditions affect how the firm coordinates various tasks within the organization. Furthermore, such output market conditions also influence the firm's decision about its hiring and training policy, as well as its market strategy. In sum, we have explored complementarity among strategies, human capital, and organizational choices as suggested by Bresnahan et al. (2002). Our model, which was built on works by Dessein and Santos (2006) and Aoki (1986), has two important implications: (1) as the value of adaptation vs. coordination increases, a firm is more likely to rely on horizontal coordination rather than vertical control, and utilize teams and invest in horizontal communication channels; (2) as the market environment becomes more disruptive, the firm is more likely to adopt a vertical control system, and hence develop labor-management communication channels. A rise in the value of coordination may or may not induce more usage of teams and horizontal coordination. Guided by our theoretical exploration, we have conducted an empirical analysis of new data from Japan, which provide for the first time information on newer forms of organizational innovation, such as self-managed online teams and cross-functional offline teams, in addition to data on longer-established practices, including joint labor-management committees and shopfloor committees. One novel finding is that new team-based instruments are more likely to be adopted by firms with well-established formal shop-floor-based communication channels (such as shop-floor committees), while they are less apt to be adopted by firms with well-established information sharing institutions such as joint labor-management committees. This finding is consistent with the view that: (1) firms where activities or decisions are coordinated differently tend to adopt different types of work organization; and (2) communication channels such as labor-management committees and shop-floor committees play an important role in intra-firm coordination. The finding largely supports path-dependency in the evolution of organizational architecture. We have also confirmed empirical patterns that are consistent with the implications from our theory about the relationships between market structure/environment and the adoption of team organizations. Specifically, firms in more competitive markets and those having a higher concentration in sales among a small number of customers in long-term buyer–supplier relationships are more likely to adopt both types of teams, while firms facing more erratic price movement tend not to adopt self-managed online teams. Finally, some of our findings can be meaningfully compared to prior studies (although different data and methodologies used by prior studies make strict comparisons rather difficult). First, our finding of a positive and significant association between exposure to global competition and innovative work practices is consistent with some prior studies based on data from other countries, such as Osterman (1994) on U.S. establishments, and Jirjahn (2002) on German establishments. Second, some prior studies report a significant linkage between the incidence of innovative HRMPs and firm age (notably Ichniowski and Shaw, 1995). We failed to find such linkage. The lack of a significant linkage of the incidence of newer forms of HRMPs to firm age is, however, not too surprising in the Japanese context, in which most firms had already adopted a participatory work system some time ago, and what we are studying is in essence whether these already “participatory” Japanese firms add newer forms of HRMPs. The “birth effects” (Ichniowski and Shaw, 1995) are probably less relevant to our study. Third, prior evidence on the relationship between firm size (measured by number of employees) and the adoption of innovative HRMPs tends to be inconclusive. For instance, Osterman (1994) and Jirjahn (2002) report mixed evidence whereas Brown et al. (2007) find more consistently positive associations between firm size and employee involvement schemes. Though the estimated coefficients on firm size in our study are mostly positive, as in Brown et al. (2007), they are imprecisely estimated, and hence no definitive conclusion can be drawn.