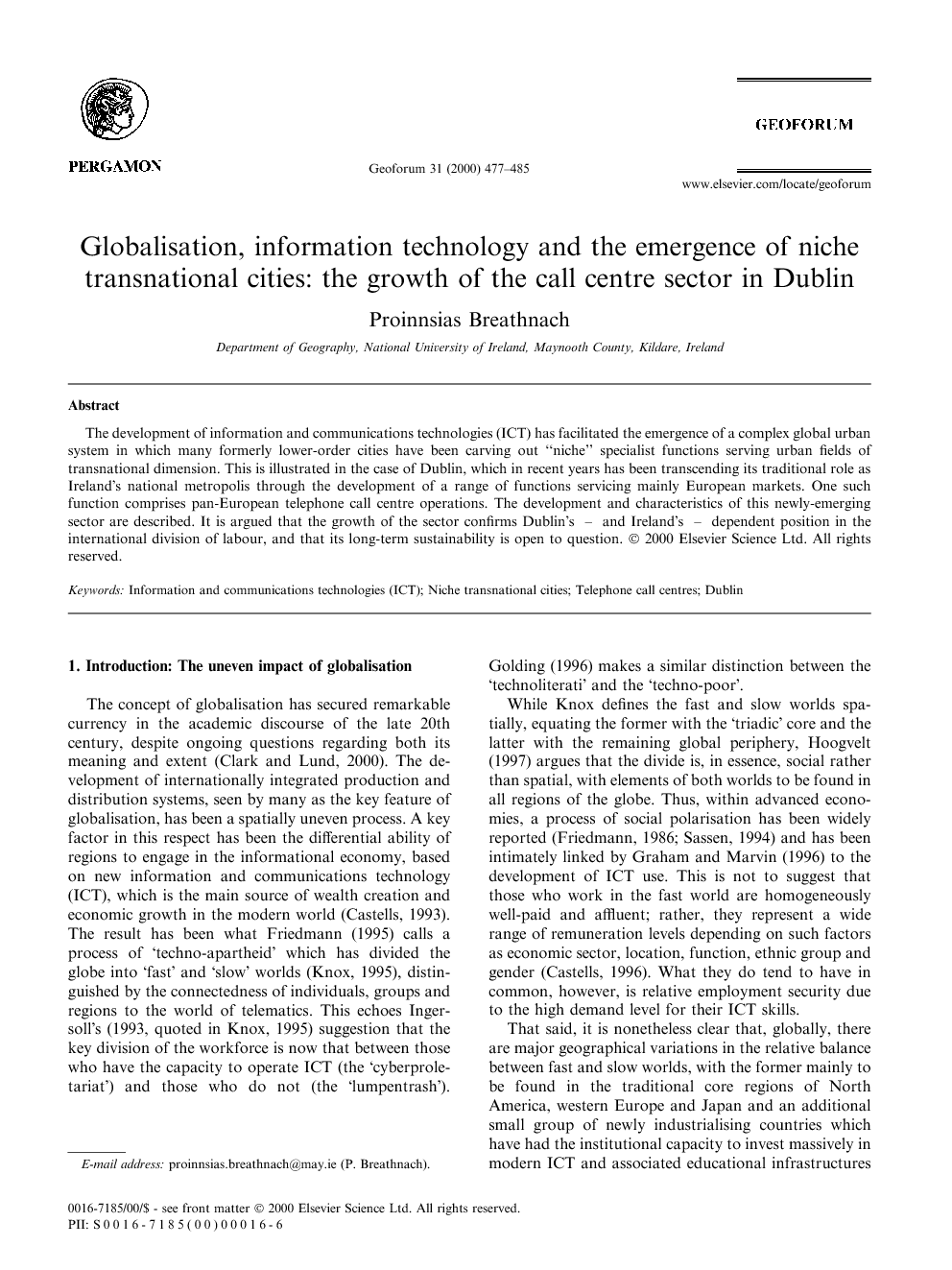 The development of information and communications technologies (ICT) has facilitated the emergence of a complex global urban system in which many formerly lower-order cities have been carving out ``niche'' specialist functions serving urban ®elds of transnational dimension. This is illustrated in the case of Dublin, which in recent years has been transcending its traditional role as IrelandÕs national metropolis through the development of a range of functions servicing mainly European markets. One such function comprises pan-European telephone call centre operations. The development and characteristics of this newly-emerging sector are described. It is argued that the growth of the sector con®rms DublinÕs ± and IrelandÕs ± dependent position in the international division of labour, and that its long-term sustainability is open to question.

The concept of globalisation has secured remarkable currency in the academic discourse of the late 20th century, despite ongoing questions regarding both its meaning and extent (Clark and Lund, 2000). The development of internationally integrated production and distribution systems, seen by many as the key feature of globalisation, has been a spatially uneven process. A key factor in this respect has been the dierential ability of regions to engage in the informational economy, based on new information and communications technology (ICT), which is the main source of wealth creation and economic growth in the modern world (Castells, 1993). The result has been what Friedmann (1995) calls a process of Ôtechno-apartheidÕ which has divided the globe into ÔfastÕ and ÔslowÕ worlds (Knox, 1995), distinguished by the connectedness of individuals, groups and regions to the world of telematics. This echoes Ingersoll Õs (1993, quoted in Knox, 1995) suggestion that the key division of the workforce is now that between those who have the capacity to operate ICT (the Ôcyberproletariat Õ) and those who do not (the ÔlumpentrashÕ). Golding (1996) makes a similar distinction between the ÔtechnoliteratiÕ and the Ôtechno-poorÕ. While Knox de®nes the fast and slow worlds spatially, equating the former with the ÔtriadicÕ core and the latter with the remaining global periphery, Hoogvelt (1997) argues that the divide is, in essence, social rather than spatial, with elements of both worlds to be found in all regions of the globe. Thus, within advanced economies, a process of social polarisation has been widely reported (Friedmann, 1986; Sassen, 1994) and has been intimately linked by Graham and Marvin (1996) to the development of ICT use. This is not to suggest that those who work in the fast world are homogeneously well-paid and auent; rather, they represent a wide range of remuneration levels depending on such factors as economic sector, location, function, ethnic group and gender (Castells, 1996). What they do tend to have in common, however, is relative employment security due to the high demand level for their ICT skills. That said, it is nonetheless clear that, globally, there are major geographical variations in the relative balance between fast and slow worlds, with the former mainly to be found in the traditional core regions of North America, western Europe and Japan and an additional small group of newly industrialising countries which have had the institutional capacity to invest massively in modern ICT and associated educational infrastructures (Freeman, 1994). The slow world ± found predominantly in the less developed countries of the global periphery and accounting for the bulk of the worldÕs population ± is becoming increasingly marginalised and is moving, as Castells (1993, p. 37) puts it, ``from a structural position of exploitation to a structural position of irrelevance''.

In the past, Ireland has occupied a structurally dependent, peripheral, position within both the ÔoldÕ international division of labour between industrialised and primary-producing economies, and the ÔnewÕ international division of labour which emerged in the 1960s and 1970s, whereby routine, low-skill manufacturing activities were diused to selected peripheral regions. More recently, Ireland has been one of the few peripheral regions which, through concerted investment in ICT infrastructure and associated education and training, has managed to adhere itself to the ÔfastÕ component of the emerging global informational economy of the late 20th century. This has facilitated the attraction of considerable investment in ICT manufacturing and ICT-using services which has allowed Ireland ± and particularly Dublin, where the bulk of this recent investment has been concentrated ± to move towards the living standards of the worldÕs core economies. Nevertheless, due to its ongoing economic reliance on inward investment whose continuance is externally determined, Ireland remains a dependent economy, albeit located in what Todd (1995) has termed the ``rich periphery'' of the fast world, rather than the poor periphery of the slow world. In successfully targetting selected ICT-intensive investment in selected sectors, Dublin has managed to carve out a niche for itself as a transnational city. However, our examination of one of these sectors ± call centres ± has raised questions about the sustainability of this position, contingent as it is on exogenous economic, technological and political developments. Friedmann (1995) has pointed to the dynamism and volatility of the global urban system, with the relative positions of dierent cities waxing and waning over time. In this context, whether Dublin can maintain or even develop its role as a transnational city will depend on its adaptability to changing circumstances and, in particular, its ability to attract economic functions which are more central to the operations of the transnational ®rms which have become crucial to IrelandÕs continued economic well-being.