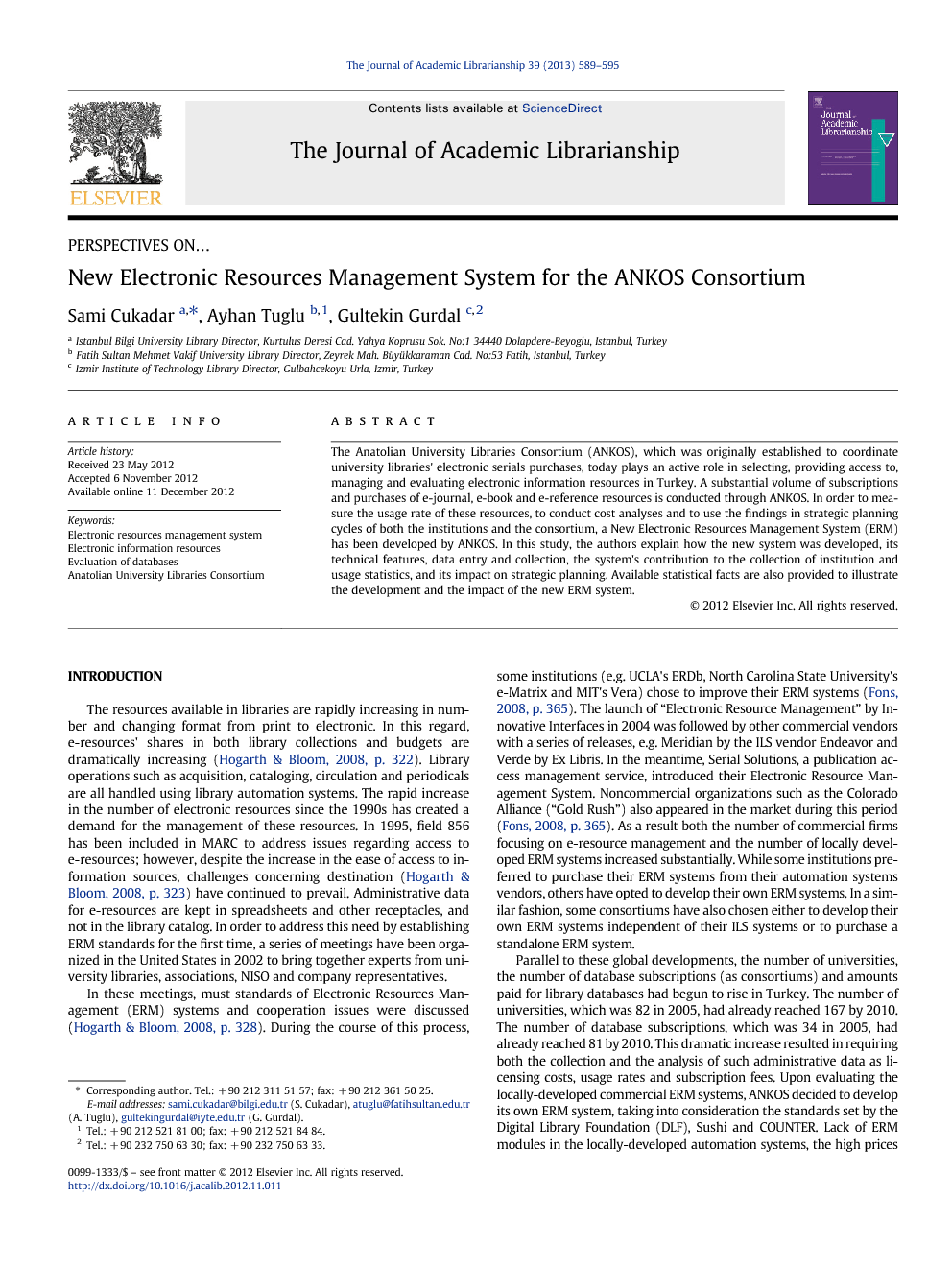 The Anatolian University Libraries Consortium (ANKOS), which was originally established to coordinate university libraries' electronic serials purchases, today plays an active role in selecting, providing access to, managing and evaluating electronic information resources in Turkey. A substantial volume of subscriptions and purchases of e-journal, e-book and e-reference resources is conducted through ANKOS. In order to measure the usage rate of these resources, to conduct cost analyses and to use the findings in strategic planning cycles of both the institutions and the consortium, a New Electronic Resources Management System (ERM) has been developed by ANKOS. In this study, the authors explain how the new system was developed, its technical features, data entry and collection, the system's contribution to the collection of institution and usage statistics, and its impact on strategic planning. Available statistical facts are also provided to illustrate the development and the impact of the new ERM system.

The resources available in libraries are rapidly increasing in number and changing format from print to electronic. In this regard, e-resources' shares in both library collections and budgets are dramatically increasing (Hogarth & Bloom, 2008, p. 322). Library operations such as acquisition, cataloging, circulation and periodicals are all handled using library automation systems. The rapid increase in the number of electronic resources since the 1990s has created a demand for the management of these resources. In 1995, field 856 has been included in MARC to address issues regarding access to e-resources; however, despite the increase in the ease of access to information sources, challenges concerning destination (Hogarth & Bloom, 2008, p. 323) have continued to prevail. Administrative data for e-resources are kept in spreadsheets and other receptacles, and not in the library catalog. In order to address this need by establishing ERM standards for the first time, a series of meetings have been organized in the United States in 2002 to bring together experts from university libraries, associations, NISO and company representatives. In these meetings, must standards of Electronic Resources Management (ERM) systems and cooperation issues were discussed (Hogarth & Bloom, 2008, p. 328). During the course of this process, some institutions (e.g. UCLA's ERDb, North Carolina State University's e-Matrix and MIT's Vera) chose to improve their ERM systems (Fons, 2008, p. 365). The launch of “Electronic Resource Management” by Innovative Interfaces in 2004 was followed by other commercial vendors with a series of releases, e.g. Meridian by the ILS vendor Endeavor and Verde by Ex Libris. In the meantime, Serial Solutions, a publication access management service, introduced their Electronic Resource Management System. Noncommercial organizations such as the Colorado Alliance (“Gold Rush”) also appeared in the market during this period (Fons, 2008, p. 365). As a result both the number of commercial firms focusing on e-resource management and the number of locally developed ERM systems increased substantially. While some institutions preferred to purchase their ERM systems from their automation systems vendors, others have opted to develop their own ERM systems. In a similar fashion, some consortiums have also chosen either to develop their own ERM systems independent of their ILS systems or to purchase a standalone ERM system. Parallel to these global developments, the number of universities, the number of database subscriptions (as consortiums) and amounts paid for library databases had begun to rise in Turkey. The number of universities, which was 82 in 2005, had already reached 167 by 2010. The number of database subscriptions, which was 34 in 2005, had already reached 81 by 2010. This dramatic increase resulted in requiring both the collection and the analysis of such administrative data as licensing costs, usage rates and subscription fees. Upon evaluating the locally-developed commercial ERM systems, ANKOS decided to develop its own ERM system, taking into consideration the standards set by the Digital Library Foundation (DLF), Sushi and COUNTER. Lack of ERM modules in the locally-developed automation systems, the high prices of alternatives, data security and privacy issues, non-Turkish interfaces, and lack of IT staff in university libraries have all strengthened the case for ANKOS' commissioning the development of an ERM system that will allow the management of administrative data both by ANKOS itself and by its members.

Statistical data are very important in managing and evaluating electronic information resources. Libraries need the usage statistics for topics such as budgeting, renewal of database subscriptions, collection development, and increasing user education. Library consortia also need statistics in order to develop strategic plans, to negotiate with database providers, and to obtain information about their members. Within this scope, the ANKOS Electronic Resourses Management System ensures that - Data are entered into the system and assessed in line with international standards (COUNTER, SUSHI), - The information on the subscribed databases is collected, edited, updated and shared with the members, - The databases which do not provide statistical data are clearly identified, - Detailed data on the member institutions are obtained, - The performance of ANKOS and its employees is measured, - The growth rates of the consortium and the data within the scope of the consortium are kept electronically as an archive. ANKOS ERM System differs from similar ERM systems: - Free-of-charge managerial reporting on e-resources for all 120 members of ANKOS - Platform-independent, web-based application - High data security and privacy due to the fact that all data is recorded on ANKOS servers - Turkish interface - Turkish support for development - The system is exclusively used for managing administrative data This system, which was developed in parallel with technological developments and new requirements, is continuously updated. The developments in the ERM systems of other consortia are followed in order to develop the system and facilitate its international compatibility. While consortiums with similar ERM needs can use ANKOS ERM structure and ANKOS experience for development, translation of system's modules into English will also allow for quicker adaptation. The system contributes to ANKOS and its member institutions for strategic planning by facilitating budgeting for libraries, measuring usage of e-resources, and cost analysis of electronic resources. One major area of development is the automatic integration of publishers' monthly statistics. All in all, ANKOS ERM in Turkey presents a best practice example of ERM development under cost considerations and offers valuable insights for consortia managers, librarians and scholars working on ERM systems. Besides highlighting of critical success factors for the design of consortium-level ERM systems, statistical facts provided in this study, i.e. number of universities, FTE band widths, number of database subscriptions and total number of citations, will be valuable information for academics doing research on this subject, publishers and vendors.