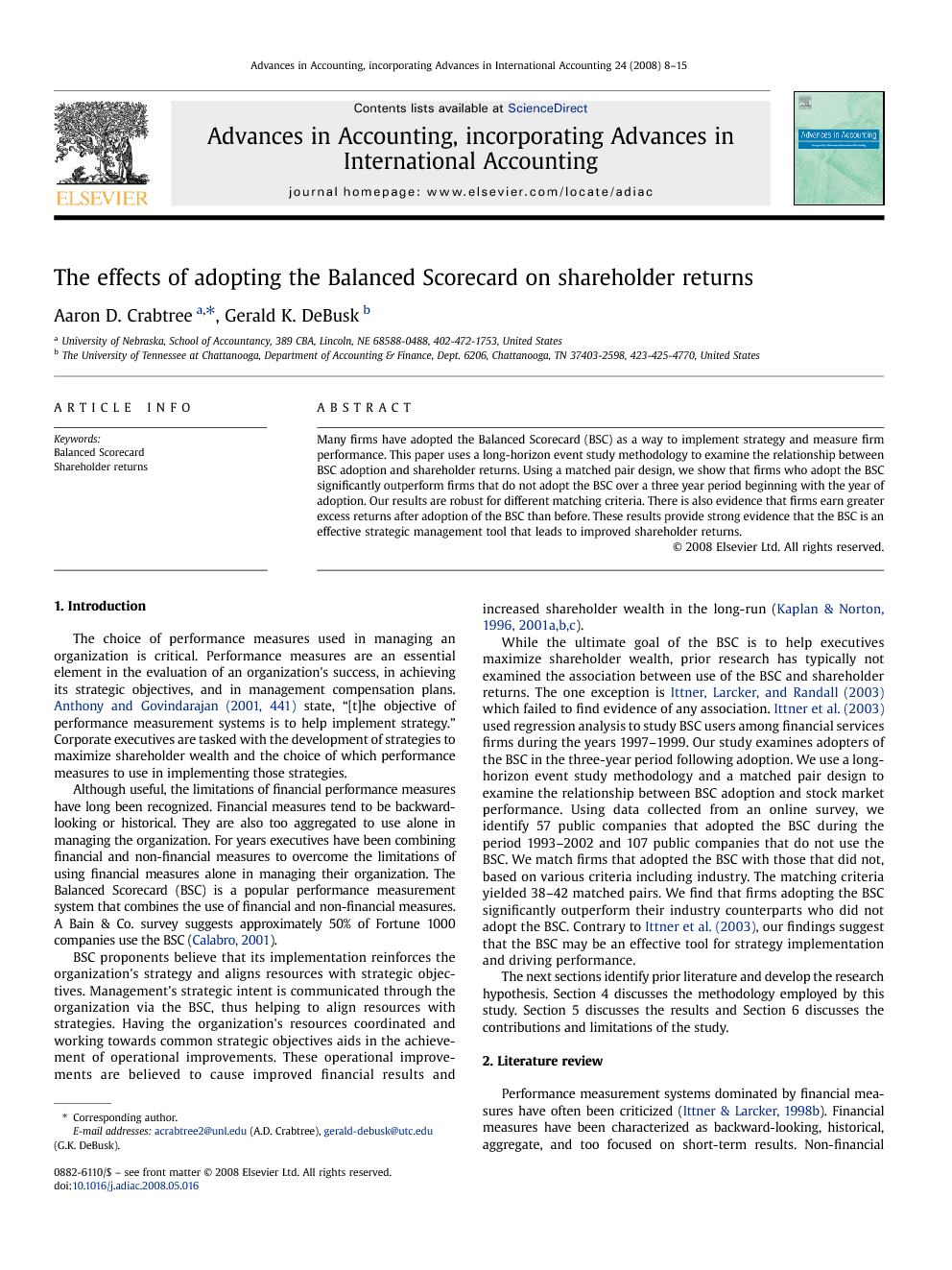 Many firms have adopted the Balanced Scorecard (BSC) as a way to implement strategy and measure firm performance. This paper uses a long-horizon event study methodology to examine the relationship between BSC adoption and shareholder returns. Using a matched pair design, we show that firms who adopt the BSC significantly outperform firms that do not adopt the BSC over a three year period beginning with the year of adoption. Our results are robust for different matching criteria. There is also evidence that firms earn greater excess returns after adoption of the BSC than before. These results provide strong evidence that the BSC is an effective strategic management tool that leads to improved shareholder returns.

The choice of performance measures used in managing an organization is critical. Performance measures are an essential element in the evaluation of an organization's success, in achieving its strategic objectives, and in management compensation plans. Anthony and Govindarajan (2001, 441) state, “[t]he objective of performance measurement systems is to help implement strategy.” Corporate executives are tasked with the development of strategies to maximize shareholder wealth and the choice of which performance measures to use in implementing those strategies. Although useful, the limitations of financial performance measures have long been recognized. Financial measures tend to be backward-looking or historical. They are also too aggregated to use alone in managing the organization. For years executives have been combining financial and non-financial measures to overcome the limitations of using financial measures alone in managing their organization. The Balanced Scorecard (BSC) is a popular performance measurement system that combines the use of financial and non-financial measures. A Bain & Co. survey suggests approximately 50% of Fortune 1000 companies use the BSC (Calabro, 2001). BSC proponents believe that its implementation reinforces the organization's strategy and aligns resources with strategic objectives. Management's strategic intent is communicated through the organization via the BSC, thus helping to align resources with strategies. Having the organization's resources coordinated and working towards common strategic objectives aids in the achievement of operational improvements. These operational improvements are believed to cause improved financial results and increased shareholder wealth in the long-run (Kaplan and Norton, 1996, Kaplan and Norton, 2001a, Kaplan and Norton, 2001b and Kaplan and Norton, 2001c). While the ultimate goal of the BSC is to help executives maximize shareholder wealth, prior research has typically not examined the association between use of the BSC and shareholder returns. The one exception is Ittner, Larcker, and Randall (2003) which failed to find evidence of any association. Ittner et al. (2003) used regression analysis to study BSC users among financial services firms during the years 1997–1999. Our study examines adopters of the BSC in the three-year period following adoption. We use a long-horizon event study methodology and a matched pair design to examine the relationship between BSC adoption and stock market performance. Using data collected from an online survey, we identify 57 public companies that adopted the BSC during the period 1993–2002 and 107 public companies that do not use the BSC. We match firms that adopted the BSC with those that did not, based on various criteria including industry. The matching criteria yielded 38–42 matched pairs. We find that firms adopting the BSC significantly outperform their industry counterparts who did not adopt the BSC. Contrary to Ittner et al. (2003), our findings suggest that the BSC may be an effective tool for strategy implementation and driving performance. The next sections identify prior literature and develop the research hypothesis. Section 4 discusses the methodology employed by this study. Section 5 discusses the results and Section 6 discusses the contributions and limitations of the study.

Potential correlated omitted variables are often a limitation in these types of studies and are a limitation in this paper as well. We find evidence of a positive association between BSC adoption and market returns but are limited in our ability to conclude that BSC adoption was the only causal factor. The theory underlying the BSC contains a set of cause-and-effect linkages among the various measures with the final step leading to improved financial performance and stock market returns. The testing of all of these intermediate steps would have been extraordinarily difficult. We examine only the last step in the cause-and-effect chain, stock market returns. We, therefore, cannot state with certainty that the cause-and-effect linkages are working as planned even though the evidence suggests a positive association between the initial step, BSC adoption, and the final result, increased shareholder value. While use of a dichotomous variable to measure BSC adoption is consistent with prior research, it is a limitation of our study. It is difficult to measure how extensively a firm has deployed a strategic initiative such as TQM or the BSC. We are also not able to determine the extent to which management is championing the initiative. We believe that these factors mitigate results and would tend to bias against finding differences in our test variables. We, in addition, have attempted to address limitations found in matched pair designs through using matching criteria that control for size, risk, and growth potential. Kaplan and Norton (2001a, 102) state they have “observed several organizations achieving performance breakthroughs within two to three years of [BSC] implementation.” This paper tests the validity of that statement. Prior research does not empirically answer the question: Does adoption of the BSC lead to improved market performance? This study provides empirical evidence addressing this question by comparing shareholder returns of BSC adopters and non-BSC adopters. Our results are the first to provide evidence that BSC firms earn greater stock market returns than those of non-BSC firms. Our results showing a positive association between BSC adoption and shareholder returns extends the literature on the BSC. Ittner et al. (2003) showed that combined use of financial and non-financial measures is positively associated with stock market returns; however, they failed to find evidence that usage of the BSC showed the same association. Our results help extend the literature by examining BSC use in a different way. Ittner et al. (2003) examines financial services firms in a regression analysis. While use of a single industry helps control for industry differences, it hampers the generalizability of their findings. We used firms from several industries but control for industry differences by using SIC code as one of our matching criteria in a matched pair design. See Table 4. We also examine BSC adoption where Ittner et al. (2003) examines BSC usage. This is particularly important when considering the time frame. Ittner et al. (2003) examines BSC users that adopted the BSC in 1999 or before. Kaplan and Norton introduced the BSC in 1992. Therefore, Ittner et al. (2003) examines early adopters of the BSC. These firms would not have had the advantage of many of the recent writings by Kaplan and Norton and other authors. Further, they would not have had as much experience from previous adoptions to draw upon. Our survey was conducted in 2003 and allows us to include in our sample firms that have recently adopted the BSC. More than 50% of our sample firms adopted the BSC after 1999, the last year of the Ittner et al. (2003) study. It would seem plausible that those adopting the BSC later would have more success, considering the additional information at their disposal. This may be a significant factor, along with industry, in explaining the differences between our findings and Ittner et al. (2003). In our tests, BSC firms performed statistically better than control firms for matches based on market value of equity, book-to-market ratios, and net assets. Over the three-year post-adoption period, BSC adopters outperformed their industry counterparts who chose not to adopt the BSC by 27–30 percentage points. The results are robust to various matching criteria. There is also evidence that firms earn greater excess returns after adoption of the BSC than before. These results provide strong evidence that the BSC is an effective strategic management tool that leads to improved shareholder returns. These results support case studies, field studies, and anecdotal evidence found in the literature (e.g. Kaplan and Norton, 1996, Kaplan and Norton, 2001c and Davis and Albright, 2004) providing additional evidence of the effectiveness of the BSC