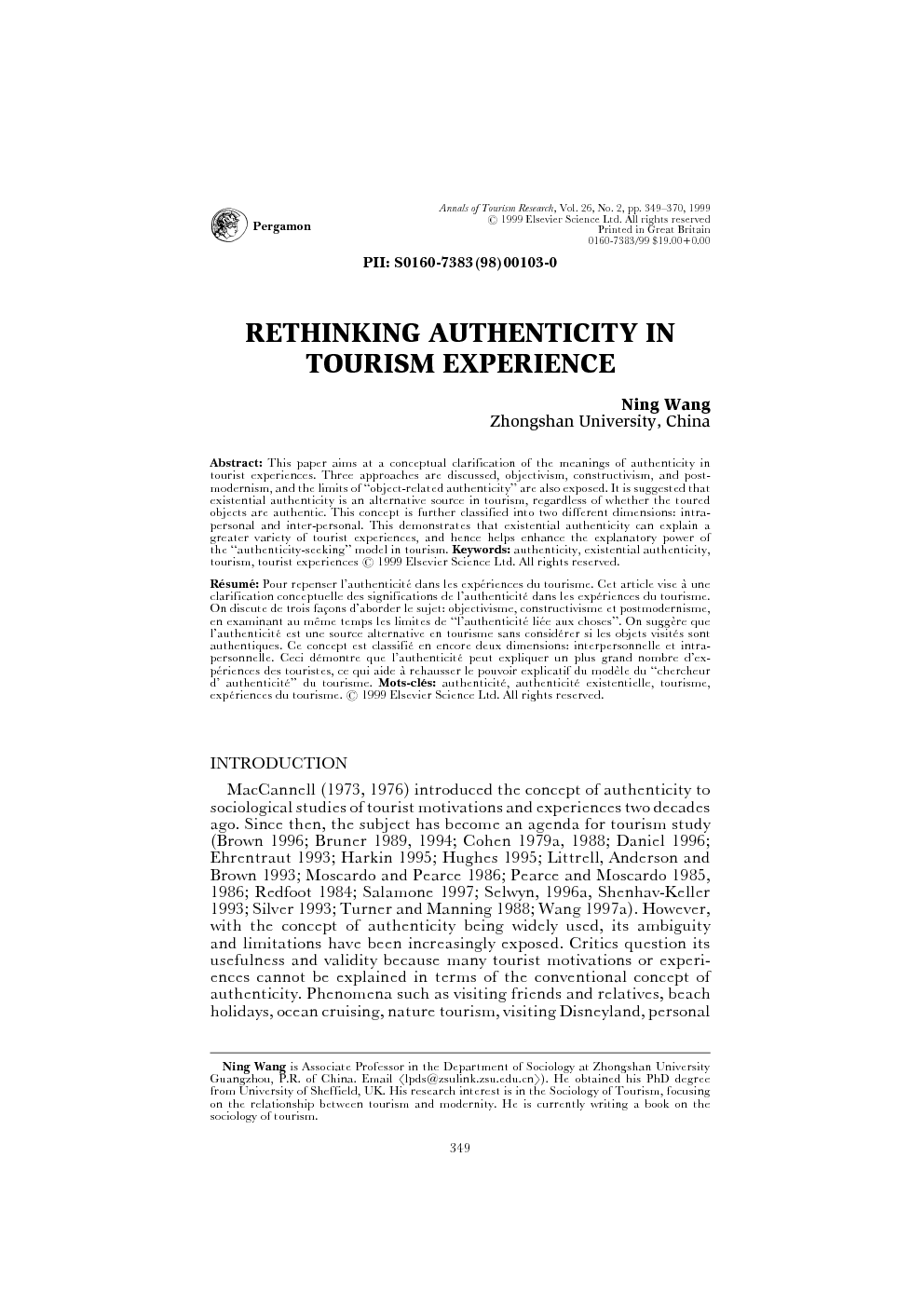 This paper aims at a conceptual clarification of the meanings of authenticity in tourist experiences. Three approaches are discussed, objectivism, constructivism, and postmodernism, and the limits of object-related authenticity are also exposed. It is suggested that existential authenticity is an alternative source in tourism, regardless of whether the toured objects are authentic. This concept is further classified into two different dimensions: intra-personal and inter-personal. This demonstrates that existential authenticity can explain a greater variety of tourist experiences, and hence helps enhance the explanatory power of the authenticity-seeking model in tourism.

MacCannell (MacCannell 1973, MacCannell 1976) introduced the concept of authenticity to sociological studies of tourist motivations and experiences two decades ago. Since then, the subject has become an agenda for tourism study (Brown 1996; Bruner 1989,Bruner 1994; Cohen 1979a, Cohen 1988; Daniel 1996; Ehrentraut 1993; Harkin 1995; Hughes 1995; Littrell et al 1993; Moscardo and Pearce 1986; Pearce and Moscardo 1985, Pearce and Moscardo 1986;Redfoot 1984; Salamone 1997; Selwyn, 1996a, Shenhav-Keller 1993;Silver 1993; Turner and Manning 1988; Wang 1997a). However, with the concept of authenticity being widely used, its ambiguity and limitations have been increasingly exposed. Critics question its usefulness and validity because many tourist motivations or experiences cannot be explained in terms of the conventional concept of authenticity. Phenomena such as visiting friends and relatives, beach holidays, ocean cruising, nature tourism, visiting Disneyland, personal hobbies such as shopping, fishing, hunting, or sports, and so on, have nothing to do with authenticity in MacCannells sense (Schudson 1979; Stephen 1990; Urry 1990). According to Urry , the search for authenticity is too simple a foundation for explaining contemporary tourism. (Urry 1991:51). But still authenticity is relevant to some kinds of tourism such as ethnic, history or culture tourism, which involve the representation of the Other or of the past. However, if the concept is of limited applicability, then how can it be of central importance in tourism studies? Can one continue to use it while ignoring the difficulties relating to it, discard it altogether, or alternatively, redefine its meaning in order to justify and enhance its explanatory power? This paper concentrates on the third choice: rethinking the meanings of authenticity in terms of existential philosophers usage of the idea. While the two conventional meanings in the literature (namely, objective and constructive authenticity) are discussed, its third usage (existential authenticity) will be suggested as an alternative. This paper has two aims. First, the three different approaches—objectivism, constructivism, and postmodernism—are reviewed and analyzed. As a result, three different types of authenticity (objective authenticity, constructive or symbolic authenticity, and existential authenticity) will be clarified. Second, the paper will suggest that, in postmodern conditions, both objective and constructive authenticity, as object-related notions, can only explain a limited range of tourist experiences, whereas existential authenticity, as activity-related situation, is germane to the explanation of a greater variety of tourist experiences. Existential authenticity is further classified into two different dimensions: intra-personal and inter-personal authenticity.

While objectivists, constructivists, and posmodernists argue about whether and how toured objects are experienced as real, this paper suggests that, even if toured objects are totally inauthentic, seeking otherwise is still possible, because tourists can quest for an alternative, namely, existential authenticity to be activated by tourist experience. In addition to conventional objective and constructive authenticity, an existential version is a justifiable alternative source for authentic experiences in tourism. In a number of tourism types such as nature, landscape, beach, ocean cruising, adventures, family, visiting friends and relatives, and so on, what tourists seek are their own authentic selves and intersubjective authenticity, and the issue of whether the toured objects are authentic is irrelevant or less relevant. Since the concept of existential authenticity can explain a wider spectrum of tourist phenomena than the conventional concept of authenticity, it therefore opens up broad prospects for rejustification of authenticity-seeking as the foundation of tourist motivations. The arguments presented in this paper are not conclusive but rather suggestive. Further research along a few other directions are in order. First, empirical research can test and confirm the arguments put forward in this paper. For instance, reviews and analyses of tourist marketing documents (e.g., tourist brochures) help to make clear how the industry markets its products in terms subsumed remain the same existential authenticity. Second, in this paper the limits of objective and constructive authenticities are exposed. However, their relevance to tourism is not negated altogether. Further efforts may discover empirically how objective, constructive (or symbolic), and existential authenticities are distributed among tourists and why certain tourists prefer one kind of authenticity to others. Third, to deepen the debate about authenticity in tourism, a reflection on the limits of the historicist conception of authenticity will be of great help (Bhabha 1994). From a historicist perspective, it is usually assumed that authenticity is equated to an origin in time. This then implies that subsequent alteration, creativity, transformation, and emerging attributes are inauthentic in terms of this origin. However, the problem is that there is no absolute point of origin, nor is anything static; rather, change is constant (E. Bruner 1994). As mentioned before, the difficulty of this historicist conception of authenticity lies in the fact that the restless and infinite retreat of now will eventually make anything that has taken place in the world authentic. Thus, this concept needs to be transcended, and this awaits more thoughts.Macdonald 1997, Selwyn 1996b, Tonnies 1955