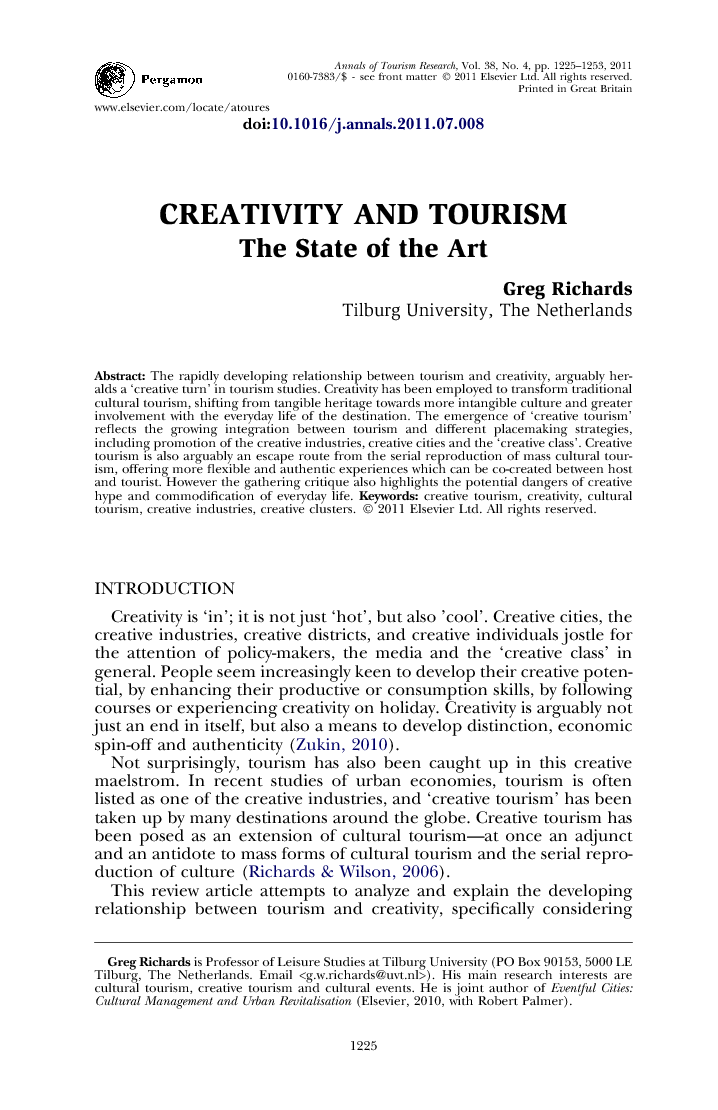 The rapidly developing relationship between tourism and creativity, arguably heralds a ‘creative turn’ in tourism studies. Creativity has been employed to transform traditional cultural tourism, shifting from tangible heritage towards more intangible culture and greater involvement with the everyday life of the destination. The emergence of ‘creative tourism’ reflects the growing integration between tourism and different placemaking strategies, including promotion of the creative industries, creative cities and the ‘creative class’. Creative tourism is also arguably an escape route from the serial reproduction of mass cultural tourism, offering more flexible and authentic experiences which can be co-created between host and tourist. However the gathering critique also highlights the potential dangers of creative hype and commodification of everyday life.

Creativity is ‘in’; it is not just ‘hot’, but also ’cool’. Creative cities, the creative industries, creative districts, and creative individuals jostle for the attention of policy-makers, the media and the ‘creative class’ in general. People seem increasingly keen to develop their creative potential, by enhancing their productive or consumption skills, by following courses or experiencing creativity on holiday. Creativity is arguably not just an end in itself, but also a means to develop distinction, economic spin-off and authenticity (Zukin, 2010). Not surprisingly, tourism has also been caught up in this creative maelstrom. In recent studies of urban economies, tourism is often listed as one of the creative industries, and ‘creative tourism’ has been taken up by many destinations around the globe. Creative tourism has been posed as an extension of cultural tourism—at once an adjunct and an antidote to mass forms of cultural tourism and the serial reproduction of culture (Richards & Wilson, 2006). This review article attempts to analyze and explain the developing relationship between tourism and creativity, specifically considering the implications of the ‘creative turn’ in tourism and examining the ways in which relationship has been approached in tourism studies and more general social science literature. It deals with the drivers of creativity in tourism both in terms of production and consumption, evolving intervention strategies, the development of creative practices in tourism and the rise of creative tourism as a distinct field of tourism development. The gathering critique of creativity is also reviewed, and the potential dangers of the creative colonization of everyday life are outlined.

As in many other disciplines, creativity has increasingly become a focus of attention for tourism scholars in recent years. Although the concept of creativity remains elusive to define, it has been integrated into tourism in a range of different forms, via creative people, products, processes and places. This creative wave has been driven by both productive and consumption-related forces, including the growth of the experience economy, the need to valorize culture and the postmodern fragmentation of demand. The growth of creative approaches to tourism can also be linked to the various strategies to create distinctive places, including the promotion of creative industries, creative cities and the creative class. Arguably these different strategies manifest themselves concretely through the absorption of creative production and consumption into specific creative clusters. These nodes in creative networks can link the various creative industries and creative people with tourism, anchoring flows of knowledge, images and power in specific local spaces. The growth of cultural and creative events has also served to provide a particular concentration of creativity in time and space which is also extremely attractive to tourists and others in search of co-presence (Richards, 2010). Creativity provides activity, content and atmosphere for tourism, and tourism in turn supports creative activities. The growing integration of tourism and creativity is evident in the treatment of tourism as a creative industry. This integration has also led some to identify a specific form of ‘creative tourism’, which involves the co-creation of participative, ‘authentic’ experiences that allow people to develop their creative potential and skills through contact with local people and culture. Specific creative tourism initiatives have sprung up in a range of places, including major cities and artistic havens in rural areas. These types of initiatives are often based on the idea of providing an alternative to the serial reproduction that affects much cultural tourism, and they are often spearheaded by ‘lifestyle entrepreneurs’ trying to generate economic capital from their creative skills. Creative tourism is therefore often seen as a development of cultural tourism, which has arguably become increasingly mainstream over the years. The irony is that creative tourism, in apparently offering an alternative to mass cultural tourism, may be far more effective in spearheading new forms of commodification. The object of commodification shifts from the tangible heritage long valorized through cultural tourism towards the intangible culture of everyday life, leading to a further ‘colonization of the lifeworld’ (Lengkeek, 1996). It also seems that notions of ‘authenticity’ are shifting in models of creative tourism. The material and contextual forms of authenticity so important in the tangible heritage of cultural tourism are being replaced by more conceptual forms of authenticity which are judged according to the concept of the original performer or maker (Ex & Lengkeek, 1996). In the co-creation of creative tourism experiences, conceptual authenticity is arguably negotiated in situ by the host and the tourist, each playing a role as the originator of the experience. This also represents a shift from the externally-defined forms of distinction so prevalent in cultural tourism towards a more internal, skills-based model of distinction. The intensity of such participative models of creative tourism makes it unlikely that it will move into the mass market of cultural tourism. However, creativity may well play an important part in mainstream tourism experiences by adding to the atmosphere of places, forming part of the ‘buzz’ apparently so important to attracting the creative class. In view of this complexity perhaps creative tourism is not a coherent ‘niche’ at all, but rather a series of creative practices linking production, consumption and place. The creativity involved in creative tourism is also not limited to a single actor, such as the tourists themselves, but involves the creative interplay of producers, consumers, policy makers and landscapes to develop embedded creativity in tourism experiences. The evolving relationship between creativity and tourism may therefore force us to re-think some important aspects of contemporary tourism. In particular, the dichotomous roles of the tourist as sovereign chooser or unfortunate dupe are eroded by the creative interplay of different actors and contexts in the making and performance of tourism experiences. Tourists not only visit places, they also make them, and the point of creative tourism should be to ensure that co-makership happens through an exchange of skills and knowledge with those who are visited.