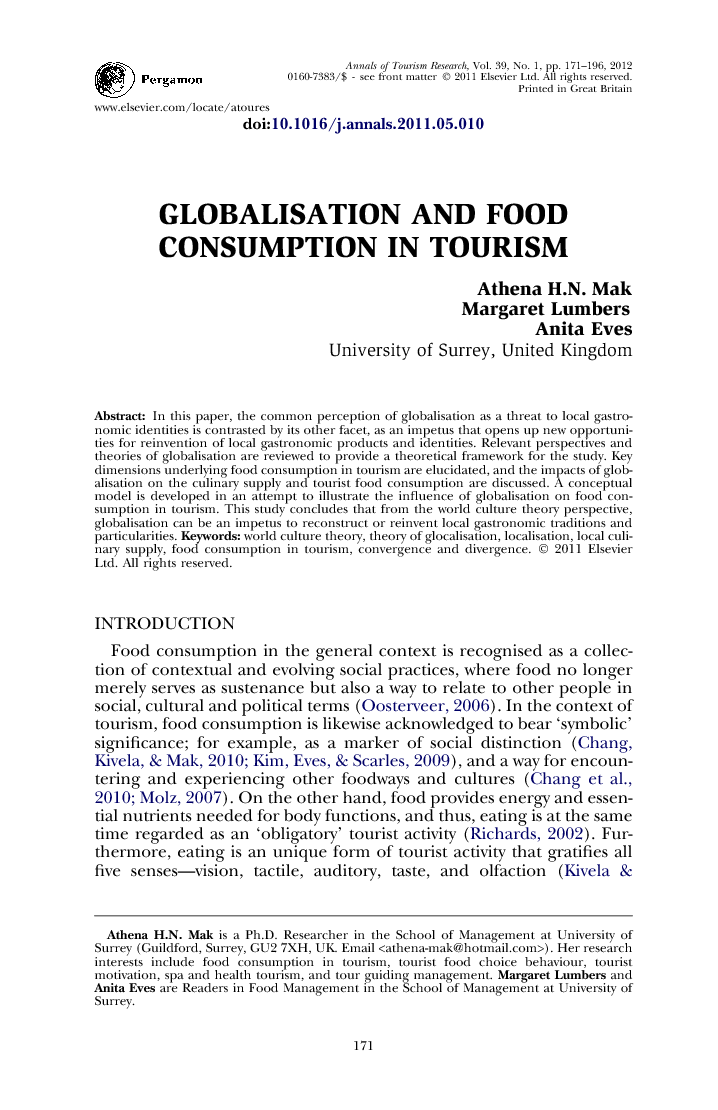 Food consumption in the general context is recognised as a collection of contextual and evolving social practices, where food no longer merely serves as sustenance but also a way to relate to other people in social, cultural and political terms (Oosterveer, 2006). In the context of tourism, food consumption is likewise acknowledged to bear ‘symbolic’ significance; for example, as a marker of social distinction (Chang et al., 2010 and Kim et al., 2009), and a way for encountering and experiencing other foodways and cultures (Chang et al., 2010 and Molz, 2007). On the other hand, food provides energy and essential nutrients needed for body functions, and thus, eating is at the same time regarded as an ‘obligatory’ tourist activity (Richards, 2002). Furthermore, eating is an unique form of tourist activity that gratifies all five senses—vision, tactile, auditory, taste, and olfaction (Kivela & Crotts, 2006), offering tourists ‘sensory pleasure’ that can fulfil the ‘experiential’ part of the tourist experience (Hjalager & Richards, 2002). The significant implications of tourist food consumption on destinations have received a growing research interest recently. Evidence from a number of studies suggests that tourists’ interests in and preferences for food in a destination can play a significant role in affecting their destination choice (Bessiere, 1998, Cohen and Avieli, 2004, Hall and Mitchell, 2001, Hall and Sharples, 2003, Hjalager and Richards, 2002 and Long, 2004). Tourists’ spending on food can constitute up to one-third of the total tourist expenditure (Hall and Sharples, 2003 and Telfer and Wall, 2000), thus comprising a significant proportion of tourism revenue. Tourists’ food choice and preferences are recognised as important forces driving the tourism demand for food, which have an immediate influence on the offerings of tourist-oriented hospitality businesses and a significant impact on local food supply; for instance, with regard to the amount of food imported for tourists, the linkage between local agriculture production and tourism, and the use of provenance as a distinctive attribute of local food products to attract tourists’ attention (Morgan et al., 2006, Telfer and Wall, 2000, Torres, 2002 and Torres, 2003). Despite the importance of food consumption in the context of tourism, little is known about the phenomenon in general, and from the sociological perspective in particular (Cohen & Avieli, 2004). Whilst the ongoing process of globalisation has brought about profound transformations in food production and consumption (Oosterveer, 2006 and Wilhelmina et al., 2010), a number of studies suggest that food consumption in tourism is also subject to the macro influences of globalisation (Hall and Mitchell, 2002a, Richards, 2002, Symons, 1993 and Torres, 2002). For instance, there is a concern that cultural imperialism (Tomlinson, 1991) and McDonaldisation (Ritzer, 1995) may lead to homogenisation that can result in a ‘global palate’ as well as a ‘global cuisine’ (Richards, 2002, Ritzer, 1995 and Symons, 1993). The homogenising force of globalisation is thus commonly seen as a threat to the close connection between food and place, or as Trubek (2008) puts it, the ‘taste of place’ or ‘terroir’. Hence, globalisation can significantly affect local gastronomic identity and image (the holistic impression of the gastronomic landscape of a destination) ( Fox, 2007 and Harrington, 2005), and can result in the deprivation of a ‘sense of place’ for both locals and tourists (Richards, 2002). Such an outcome would be most threatening to destinations that utilise their local cuisine and gastronomic products as a source of tourist attraction or as a major image differentiator from their competitors. Whilst it is a common perception that globalisation poses a threat to local gastronomic identity and image, there is preliminary evidence suggesting that it can provide an impetus for reinventing local gastronomic products and identity. Torres (2002) contends that the ‘average world citizen’ now has increased exposure to a wider variety of ethnic dishes and products, thus this trend may stimulate a greater demand for local speciality products and indigenous cuisines. Ram (2004) also found that McDonaldisation in Israel did not bring about the demise of local delicacies, but instead contributed to their revival. Accordingly, it is not only necessary to examine food consumption in tourism, but also to consider the interplay between globalisation and food in tourism. Such knowledge will be crucial to destination marketers in devising effective strategies for marketing and positioning their gastronomic products as well as in providing theoretical groundwork for further research into food in tourism, an important area which has been neglected in the past (Chang et al., 2010 and Cohen and Avieli, 2004). It is in such a context that this paper explores the influence of globalisation on food consumption in tourism. Specifically, relevant perspectives and theories of globalisation are examined in order to provide a theoretical framework for the study. Various perspectives of tourist food consumption research are reviewed to identify the key dimensions underlying food consumption in tourism. Then, the paper discusses the impacts of globalisation on local culinary supply and tourist food demand. In conclusion, a conceptual model is developed to illustrate globalisation’s influence on food consumption in tourism. It should be noted that whilst local culinary supply may include production, processing, wholesaling, retailing, and food services, the focus of this paper is predominantly on the food service sector as it is one of the most important value adding sectors in the context of tourism (Smith & Xiao, 2008).