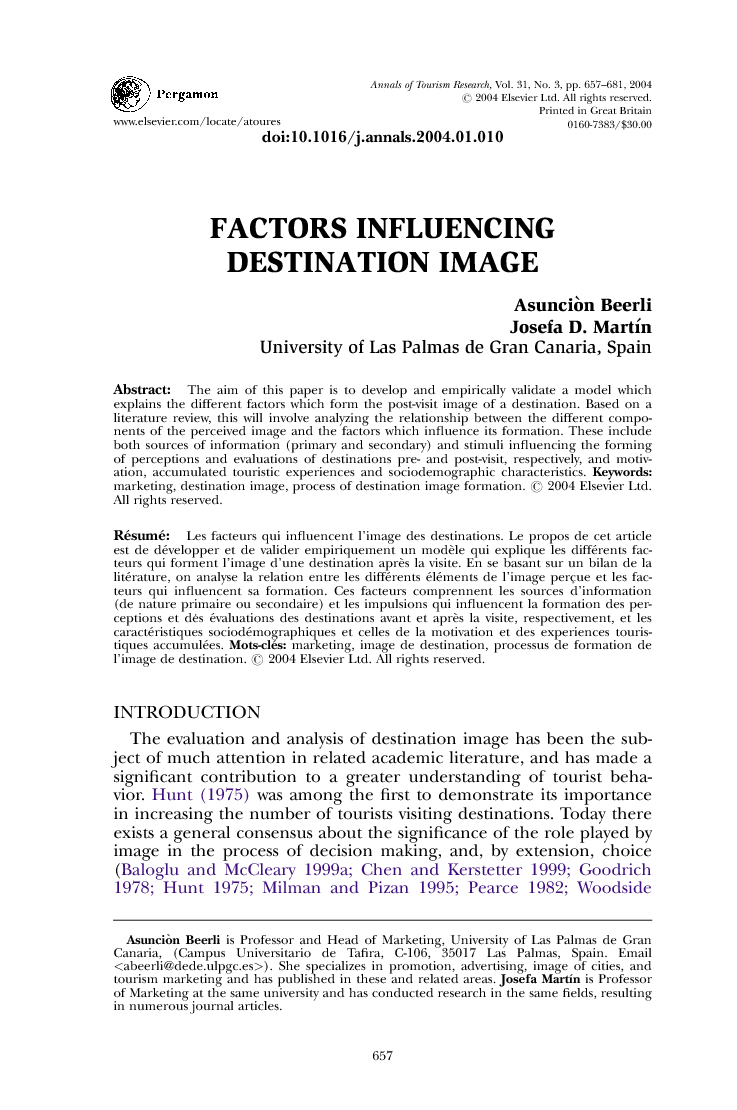 The aim of this paper is to develop and empirically validate a model which explains the different factors which form the post-visit image of a destination. Based on a literature review, this will involve analyzing the relationship between the different components of the perceived image and the factors which influence its formation. These include both sources of information (primary and secondary) and stimuli influencing the forming of perceptions and evaluations of destinations pre- and post-visit, respectively, and motivation, accumulated touristic experiences and sociodemographic characteristics.

The evaluation and analysis of destination image has been the subject of much attention in related academic literature, and has made a significant contribution to a greater understanding of tourist behavior. Hunt (1975) was among the first to demonstrate its importance in increasing the number of tourists visiting destinations. Today there exists a general consensus about the significance of the role played by image in the process of decision making, and, by extension, choice (Baloglu and McCleary, 1999a, Chen and Kerstetter, 1999, Goodrich, 1978, Hunt, 1975, Milman and Pizan, 1995, Pearce, 1982 and Woodside and Lysonsky, 1989). However, despite this increasing interest in destination image, many agree that the majority of studies carried out to date are insufficiently theory-based, resulting in a lack of framework or solid conceptualization. Many studies frequently use the term “destination image”, but they tend not to conceptualize this term precisely. Various authors point out that while the concept is widely used in the empirical context, it is loosely defined and lacks a solid conceptual structure (Fakeye and Crompton, 1991 and Mazanec and Schweiger, 1981). The study by Gallarza, Gil Saura and Calderón Garcia (2002) featured an exhaustive review of the literature dealing with this concept, proposing a theoretical model defining image in terms of four characteristics: complex, multiple, relativistic, and dynamic. The most recent studies (Baloglu and Brinberg, 1997, Baloglu and McCleary, 1999a, Baloglu and McCleary, 1999b, Gartner, 1993 and Walmsley and Young, 1998) tend to consider image as a concept formed by the consumer’s reasoned and emotional interpretation as the consequence of two closely interrelated components: perceptive/cognitive evaluations referring to the individual’s own knowledge and beliefs about the object (an evaluation of the perceived attributes of the object), and affective appraisals relating to an individual’s feelings towards the object. From a theoretical point of view, there is general agreement that the cognitive component is an antecedent of the affective component and that the evaluative responses of consumers stem from their knowledge of the objects (Anand, Holbrook and Stephens, 1988, Holbrook, 1978, Russel and Pratt, 1980 and Stern and Krakover, 1993). In addition, the combination of these two factors produces an overall, or compound, image relating to the positive, or negative, evaluation of the product or brand. In the context of tourism, Baloglu and McCleary, 1999a and Baloglu and McCleary, 1999b and Stern and Krakover (1993) show empirically that these perceptual/cognitive and affective evaluations have a direct influence on the overall image, and also that the former, through the latter, has an indirect influence on that image. Related professional and academic papers have proposed a number of scales to determine the different attributes relevant to measuring perceived image. An analysis of the principal scales (Baloglu and McCleary, 1999a, Baloglu and McCleary, 1999b, Calantone, Di Benetton, Hakam and Bojanic, 1989, Chon, Weaver and Kim, 1991, Echtner and Ritchie, 1993, Fakeye and Crompton, 1991, Gartner, 1989, Gartner and Hunt, 1987, Gartner and Shen, 1992, Goodrich, 1978, Hu and Ritchie, 1993, Hunt, 1975, Phelps, 1986 and Walmsley and Jenkins, 1993) reveals a lack of homogeneity with respect to the attributes which define an individual’s perceptions. Similarly, it is evident that most studies have failed to establish the validity and reliability of the scales, casting doubt on their psychometric properties. Indeed, only three of the reviewed works, namely that of Echtner and Ritchie (1993) and those of Baloglu and McCleary, 1999a and Baloglu and McCleary, 1999b, had effectively determined the reliability of the scales used. This lack of a universally accepted, valid, and reliable scale for the measurement of image led to the proposal of a frame incorporating every aspect of a destination which could potentially be used as an instrument of measurement. To that end, and following a review of the attractions and attributes included in the existing scales, all factors influencing the image assessments made by individuals were incorporated and classified into nine dimensions (Table 1). The selection of the attributes used in designing a scale will depend largely on the attractions of each destination, on its positioning, and on the objectives of the assessment of perceived image, which will also determine whether specific or more general attributes are chosen. This research focuses on the process of destination image formation, one of the least studied areas in this field of research. As Baloglu and McCleary, 1999a and Mackay and Fesenmaier, 1997 point out, there have been very few empirical studies aimed at analyzing which forces influence an individual’s image of a given destination, and there is a little research into those which influence the formation and the structure of this image. In the absence of existing empirical evidence analyzing the determinants of a destination’s perceived post-visit image, this work proposes an empirical study aimed at developing and validating a model for defining such factors. To this end, and based on the limited literature base, the starting point of this work is a conceptual model (Figure 1), to be validated using path models. The model was developed in a way that differentiates between first-time and repeat tourists for several reasons. One, certain differences may exist between the image perceived by each group of individuals that have an effect on the results. Two, the relationship between secondary information sources and perceived image can only be analyzed in the case of first-timers since repeat tourists could have difficulty recalling the sources of information used before visiting the place for the first time. Three, there may be differences between the two groups in terms of their level of knowledge of the destination and in their motivations, depending on whether they had previously visited the place or not. Four, it enabled a validation of the proposed model to be made using two independent samples.