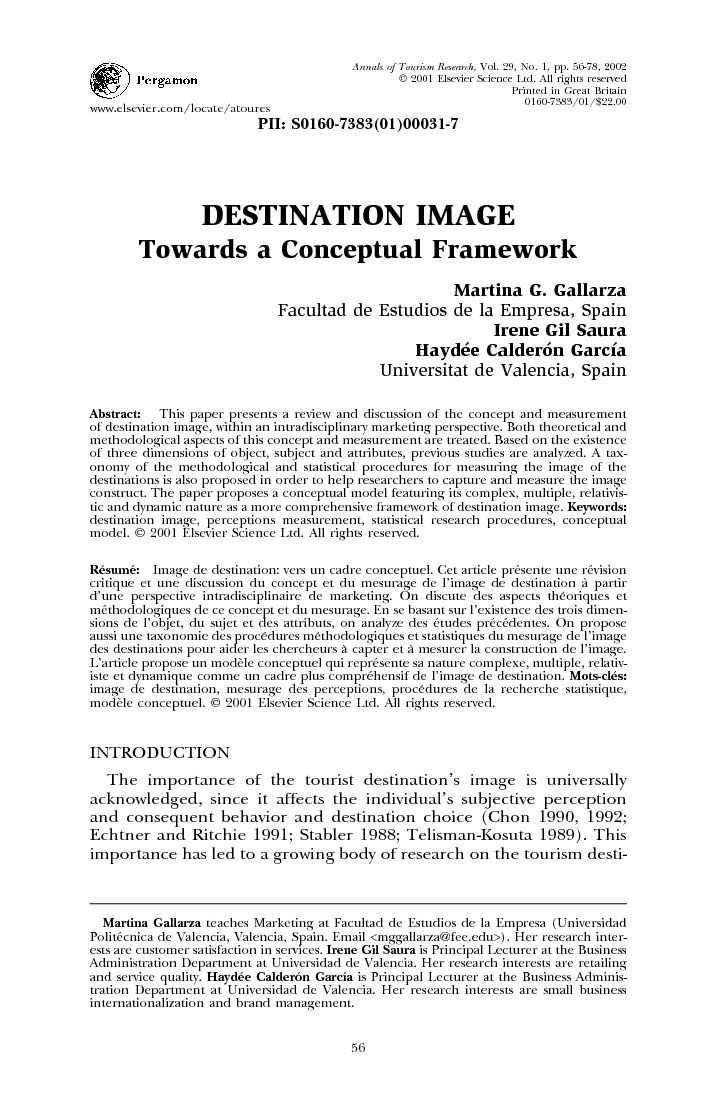 This paper presents a review and discussion of the concept and measurement of destination image, within an intradisciplinary marketing perspective. Both theoretical and methodological aspects of this concept and measurement are treated. Based on the existence of three dimensions of object, subject and attributes, previous studies are analyzed. A taxonomy of the methodological and statistical procedures for measuring the image of the destinations is also proposed in order to help researchers to capture and measure the image construct. The paper proposes a conceptual model featuring its complex, multiple, relativistic and dynamic nature as a more comprehensive framework of destination image.

The importance of the tourist destination's image is universally acknowledged, since it affects the individual's subjective perception and consequent behavior and destination choice (Chon, 1990 and Chon, 1992; Echtner and Ritchie 1991; Stabler 1988; Telisman-Kosuta 1989). This importance has led to a growing body of research on the tourism destination image (TDI). The essential characteristic of this research line is its multidisciplinarity (Ahmed, 1991 and Ahmed, 1996; Bramwell and Rawding 1996; Gartner 1989): there are many possible approaches to studying destination image, because this formation has many implications for human behavior, as seen through disciplines such as anthropology (Selwyn 1996), sociology (Meethan 1996), geography (Gould and White 1992; Draper and Minca 1997), semiotics (Sternberg 1997) and marketing (Gunn 1972), with respect to the understanding of tourism consumer behavior. In the intradisciplinary study of marketing, TDI has been the subject of considerable research during the last three decades. Investigation has been commonly based on either effective destination positioning (Carmichael 1992; Crompton, Fakeye and Lue 1992; Echtner and Ritchie 1991; Eizaguirre and Laka 1996; Reilly 1990) or on the destination selection process (Goodrich 1978; Gunn 1972; Hunt 1975; Oppermann 1996a). Despite its relevance for tourism marketing, the research on TDI faces many difficulties. One is the tourism product's characteristics such as its complexity (Smith 1994) and multidimensionality (Gartner 1989). Another is that destination marketing involves the consumer physically moving to the behavior scenario (Seaton 1994; Sessa 1989). There is also great subjectivity in providing a tourism service: images are mixed with impressions about residents, retailers, other tourists, and/or employees (Calderón, Gil and Gallarza 1998). But most of all, the intangibility of tourism service hinders image assessment as it depends on invisible elements of pre-visit selection and a pre-taste of the destination (Fakeye and Crompton 1991). Consequently, in tourism research, “…images are more important than tangible resources”, all because “perceptions, rather than reality are what motivate consumers to act or not act” (Guthrie and Gale 1991:555). In spite of the importance of this research line, several authors recognize a lack of conceptual framework around destination image. In the early 90s, one could read “although such studies have become a staple of the tourism research agenda, invariably they have been atheoretical and lacking in any conceptual framework” (Fakeye and Crompton 1991:10) or “researchers have not been successful in completely conceptualizing and operationalizing destination image” (Echtner and Ritchie 1991:10). Later on, in 1993, Gartner suggests that “most tourism image research has been piecemeal without a theoretical basis for support” (Gartner 1993:209). In order to provide a more comprehensive theoretical framework of TDI, a conceptual model from an intradisciplinary marketing perspective was developed based on previous literature. The model is designed for a better understanding of the strategic importance of destination image. It is based on two sources: a review and discussion of existing theoretical literature about conceptualizing the TDI, and an analysis and taxonomy of methodologies employed for its measurement. The purpose of the model is to contribute to a better understanding of the image concept when applied to tourist destinations and to aid selection of the best research methodologies for measuring the TDI construct.

Tourism destination image has been a worthy area of researchers' investigation for nearly 30 years. Yet despite their importance and interest, destination image studies have been criticized as atheoretical and lacking a conceptual framework (Echtner and Ritchie 1993; Fakeye and Crompton 1991; Gartner 1996), even though significant recent contributions such as Baloglu and McCleary (1999) are more comprehensive and valuable for theoretical understanding of TDI. The very large number of previous studies on TDI, both theoretical and empirical, gives the researcher interested in the topic what could be called a ‘kaleidoscopic view’ of the construct, or a continuously reduced and changing vision. Amid the multidimensionality of all tourism studies, these visions of TDI are never general enough to offer a global perspective; as with the image of tourism, generally it is difficult to assume universal truths. To rationalize this ‘kaleidoscopic view’, this review, critique, and categorization of previous studies was undertaken to orient the stream of TDI research in a conceptual model. Several steps were followed. First, from an intradisciplinary orientation of marketing, this paper offers a review of topics from the extensive research line of destination images and shows the importance of the conceptualization and measurement of TDI. Second, following Mazanec's structuring of image studies' format around three dimensions (objects, subjects, and attributes), previous empirical measurements of TDI are organized in two figures. Figure 1 lists attributes employed, in 25 image studies, to measure destination image (compare with very similar findings in Echtner and Ritchie's 1993 review): residents' receptiveness and landscape and surroundings are the attributes most studied. There is no significant predominance of either functional or psychological attributes during the period covered by the review (1979–99). Table 3 provides a taxonomy of the same 25 image studies, according to object (destination types); and subject (respondents interviewed) variables. It has been shown that the image of countries is investigated more often than any other sort of destination. Also a substantial line of research into imagery of cities is part of the growing interest in urban tourism (Oppermann 1996a). In addition, the types of respondents in TDI studies (subject variable), prove to be quite heterogeneous. As to the measurement of the TDI, the review of empirical studies presented in Figure 2 and Figure 3 reveals the great diversity of statistical methodologies. These are mostly combinations of multivariate and bivariate techniques. High levels of mathematical complexity can include a greater or lesser presence of qualitative techniques, generally in the preliminary steps of the process. In fact, in spite of its usefulness, there is a great complexity in measuring perceptions around a destination (Guthrie and Gale 1991; Hunt 1971), and the comparisons are not always accurate (Driscoll et al. 1994). The description of the nature of TDI based on previous literature and on taxonomies undertaken by the authors is summed up in the conceptual model presented in Figure 4. The construction of the model demonstrates that four features identify and describe the image construct: this nature is complex (it is not unequivocal), multiple (in elements and processes), relativistic (subjective and generally comparative), and dynamic (varying with the dimensions of time and space). The importance of this construct for strategic destination management is shown: TDI is simultaneously a variable of analysis, action, strategy, and tactics. The utility and strength of this work derives essentially from the review and discussion structuralizing the methodologies of previous empirical destination image research. The taxonomies usefully organize the thick stream of investigation and can help researchers discover improved understanding of both the concept and the measurement of TDI. Both areas of study (conceptualization and measurement) should be more united: more theoretical analysis and knowledge can help in accurately measuring TDI because what has been scientifically perceived (that is, what has been measured) is better known. As limitations to the study, the lack of empirical evidence should be mentioned. Further contributions could test hypotheses on TDI structure and on the relationship among features. Methodological procedure of reviewing could also be refined by identifying the role of every tourism journal in understanding TDI: academic vs. practical viewpoints, multidisciplinary vs intradisciplinary approaches, focus on theoretical or empirical contributions, and more. For the density and diversity of journals reviewed, many have concealed some relevant contributions. Nevertheless, the proposed model is a valuable guideline for both public and private tourism organizations: the four features provide a managerial framework for analyzing and controlling the valuable tool of destination image. Focusing on one or other feature will provide marketers with a more efficient management of tourism destinations.