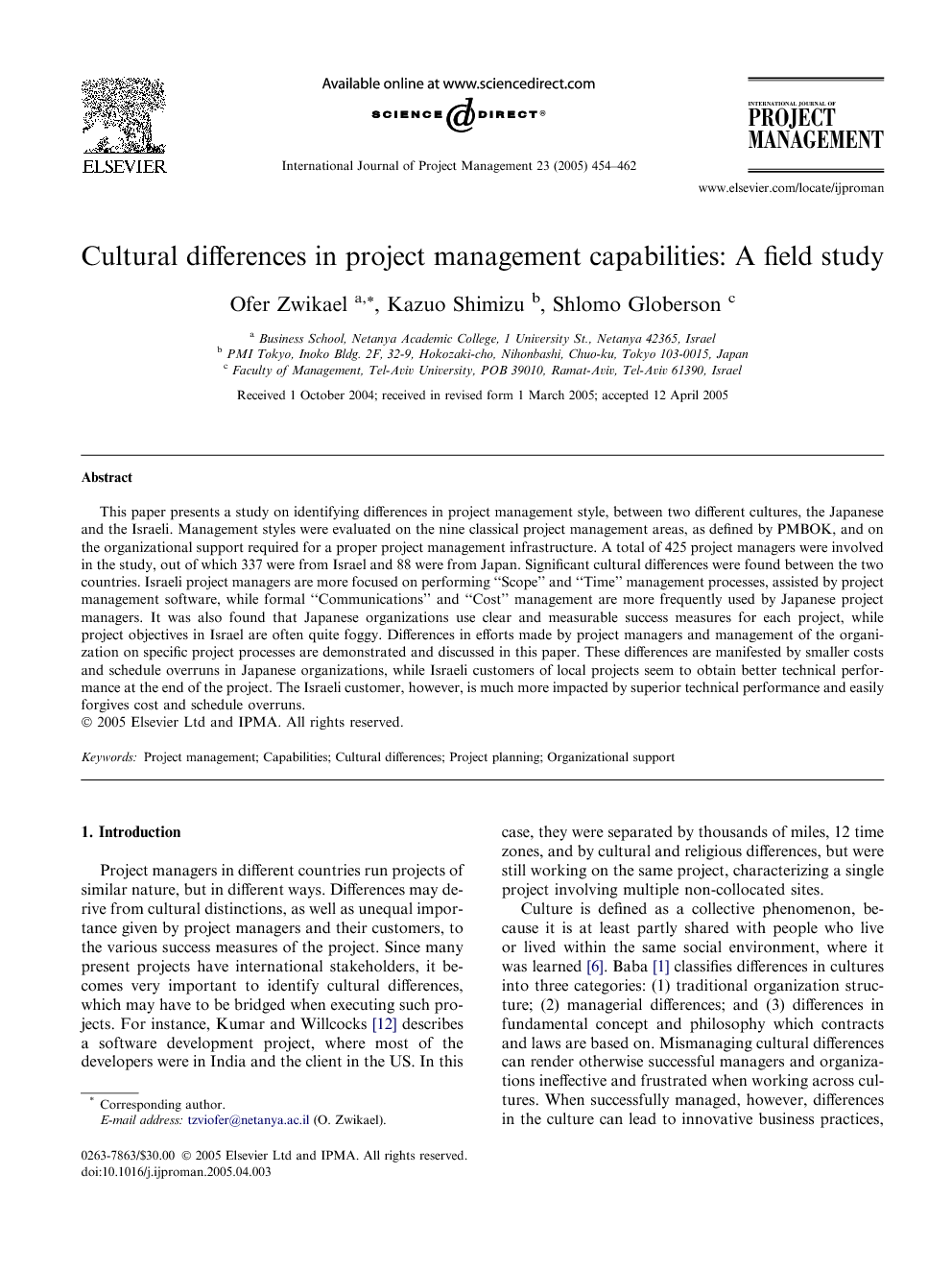 Project managers in different countries run projects of similar nature, but in different ways. Differences may derive from cultural distinctions, as well as unequal importance given by project managers and their customers, to the various success measures of the project. Since many present projects have international stakeholders, it becomes very important to identify cultural differences, which may have to be bridged when executing such projects. For instance, Kumar and Willcocks [12] describes a software development project, where most of the developers were in India and the client in the US. In this case, they were separated by thousands of miles, 12 time zones, and by cultural and religious differences, but were still working on the same project, characterizing a single project involving multiple non-collocated sites. Culture is defined as a collective phenomenon, because it is at least partly shared with people who live or lived within the same social environment, where it was learned [6]. Baba [1] classifies differences in cultures into three categories: (1) traditional organization structure; (2) managerial differences; and (3) differences in fundamental concept and philosophy which contracts and laws are based on. Mismanaging cultural differences can render otherwise successful managers and organizations ineffective and frustrated when working across cultures. When successfully managed, however, differences in the culture can lead to innovative business practices, faster and better learning within the organization, and sustainable sources of competitive advantage [5]. The task of comparing organizational performance in different countries attracts a lot of attention, as can be traced in the management literature. For example, Toren et al. [20] compared managerial task preferences and evaluation of work characteristics in the USA, Japan, Israel, Italy and Australia. Nijkamp et al. [16] compared environmental quality in 12 European countries. Jackson and Artola [9] initiated a cross-cultural empirical study, which examines ethical beliefs and behaviors among French and German managers, and compared results with previous studies of American and Israeli managers. Igbaria and Zviran [8] examined the effect of national environments on end-user computing characteristics in American, Israeli and Taiwanese companies. Koschatzky et al. [11] compared sensor technology processes in the USA, Europe and Japan. Cultural differences were found in most of these studies, indicating different behavior and decision making patterns in different countries. The objective of this paper is to compare performance of project management processes, among project managers coming from two countries – Japan and Israel. Since Israel represent in its culture the western industrial world, findings of this paper may identify project management characteristics of these countries, as well as of the Japanese culture. While managing multicultural projects, this research may be practical when one of the project stakeholders is located either in a western country or in Japan. Our findings, based on a vast field study, will follow a literary review, which will focus on the cultural background and known differences in the management culture of these two countries.

here are significant differences between the way that project management is being exercised in Israel and Japan. Some may be due to cultural differences, while others may result from differences in management styles. The differences were found in both project managers’ functions as well as in the support systems offered by the organization towards executing projects. Japanese organizations emphasize more measurements of success. As such there is probably more awareness to the typical performance measures, resulting in lower deviation between the desired and actual cost and completion time. This is not the case with both technical performance and customer satisfaction, in which Israeli project managers perceive that their performance is higher. The discrepancy between the two countries may be a result of either cultural differences concerning the perception of performance, or a real difference, resulting from the willingness of Israeli managers to over-run the cost and schedule in order to achieve better technical performance and customer satisfaction. Although the average use intensity of project planning processes is of similar value for the two countries, there are differences with regard to the use intensity of specific processes. For example, Israeli project managers use more intensive planning processes required for scheduling planning, such as activity definition and activity duration estimation. It is interesting to note that although Israeli project managers pay more attention to time planning, their projects result in higher schedule overruns, as compared to projects performed in Japan. These may indicate that schedule overrun at the end of the project is impacted by other processes, such as quality management or risk management together with schedule planning. On the other hand, Japanese managers make more use of the communication planning process. Emphasizing communication management by the Japanese project managers may not be a surprise, since teamwork is highly regarded in Japan, and this cannot be practiced without an effective communication system. Although this paper focuses only on the planning phase of the project, the findings may reflect managerial cultural differences between the two countries and the conclusions can be further elaborated on in the entire project management life cycle. Since the importance of global project management is growing, similar studies should follow in other countries as well, using the PMPQ model as the mean.