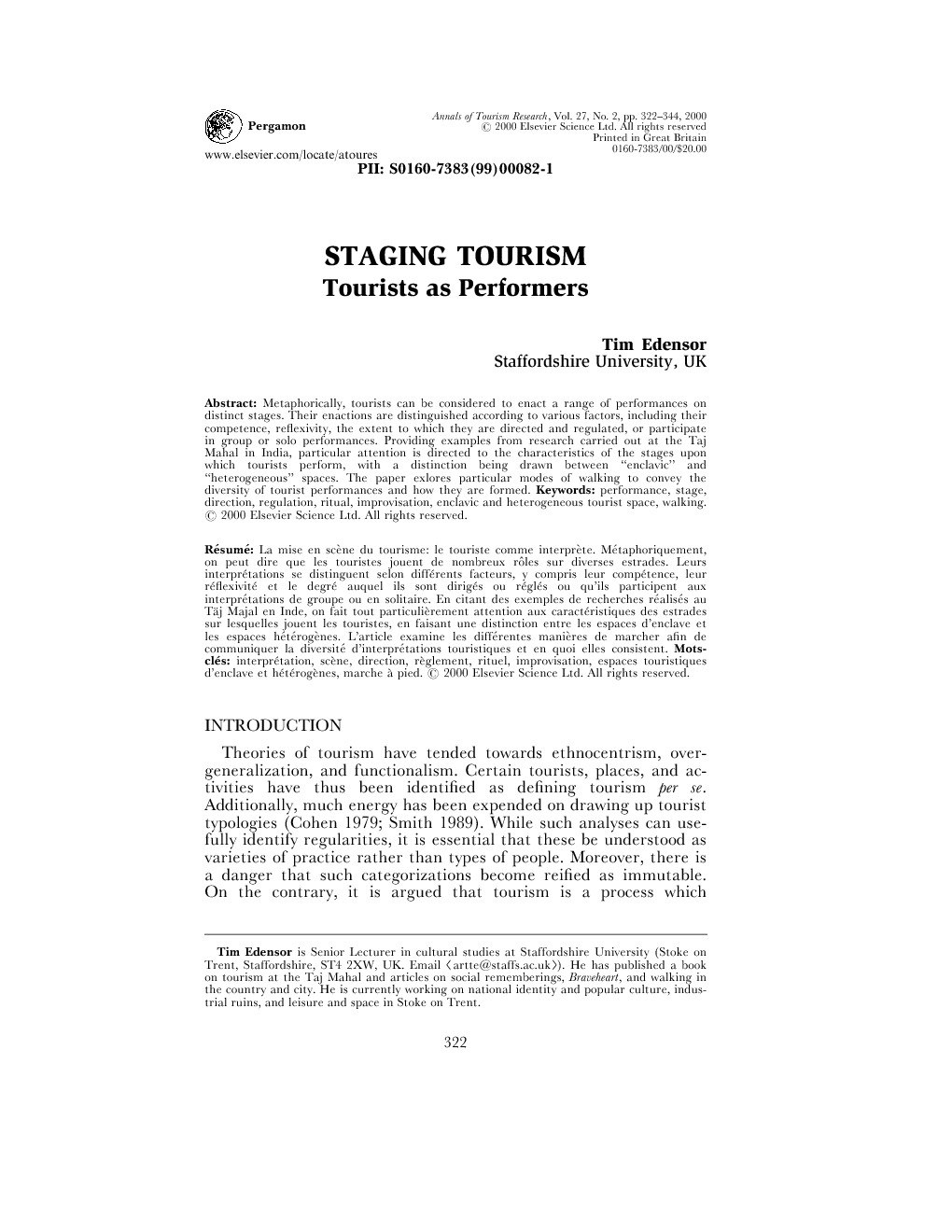 Metaphorically, tourists can be considered to enact a range of performances on distinct stages. Their enactions are distinguished according to various factors, including their competence, reflexivity, the extent to which they are directed and regulated, or participate in group or solo performances. Providing examples from research carried out at the Taj Mahal in India, particular attention is directed to the characteristics of the stages upon which tourists perform, with a distinction being drawn between “enclavic” and “heterogeneous” spaces. The paper exlores particular modes of walking to convey the diversity of tourist performances and how they are formed.

Theories of tourism have tended towards ethnocentrism, over-generalization, and functionalism. Certain tourists, places, and activities have thus been identified as defining tourism per se. Additionally, much energy has been expended on drawing up tourist typologies ( Cohen, 1979 and Smith, 1989). While such analyses can usefully identify regularities, it is essential that these be understood as varieties of practice rather than types of people. Moreover, there is a danger that such categorizations become reified as immutable. On the contrary, it is argued that tourism is a process which involves the ongoing (re)construction of praxis. In order to question such conceptions, the metaphor of this performance is used to establish a basis to examine diverse practices at tourism sites. Rather than suggesting that this is a separate realm in which a particular set of performances take place, it is contended that the whole of social life can be considered as performative, and that tourist performances exhibit continuities with enactments in other, non-tourist settings. Nevertheless, it is argued that particular dimensions of this performance can be explored according to time and space, social and spatial regulation, and issues of power. These performances are shaped by the constraints and opportunities that tour structures produce and are informed by the symbolic meanings and spatial organization of sites.

It has been suggested that to consider tourism as a range of performances shows the various dispositions and conventions that people bring to particular contexts. Yet it has been stressed that these performances not be conceived of as static; they change over time and according to the cultural practices of the tourist’s home place. Moreover, rather than understanding tourism as a sphere in which motivations and activities are entirely separate from the worlds of work, it is necessary to consider the continuities with everyday life as well as the transformations that tourists perform. For instance, it has been proposed that notions such as the performance of duty can equally apply to many of the performative conventions of much tourism, but also, the notion of getting away from it all during a period that is extraordinary, generates the taking on of transgressive roles. The dangers of focusing on kinds of tourists rather than forms of tourism has been identified. Notions of tourism as performance indicate that a range of roles can be selected and enacted through experience, from disciplined rituals, to partially improvised performances to completely improvised enactions in unbounded spaces. Thus, the same tourist may act out a medley of roles during a single tour or holiday. It has been suggested that sites be considered as stages upon which tourists perform. What is particularly interesting about identifying the various enactions which take place on a particular stage is the meeting and contestation of different social roles. Roles signify and embody notions about what actions are “appropriate”, “competent”, and “normal”. In this way, such expressions transmit and reveal a cultural power which can define and inscribe naturalness and social reality upon a performing body. Where these conventions clash, a form of performative dialogue can take place or other performers can be impugned or ignored. Audiences used to the mobilization of certain enactions may regard unfamiliar performances as absurd. For instance, as a Briton at the Taj Mahal observing a group of domestic tourists opined, “I think Indians are really crap tourists. They just don’t know how to be tourists, rushing around, talking all the time and never stopping to look at anything — even here at the Taj Mahal!” (Edensor 1998:126). Likewise, backpackers mock the rituals of package tourists. The regulated acres of enclavic space are clearly distinct from the variegated spread of a heterogeneous one. As theatres, these realms possess a material and regulatory organization which may influence the kinds of performances that are enacted. The qualities of tourist space and its (re)production have been undertheorized and an attempt has been made to suggest the possibilities offered by such analysis. However, while it is essential to acknowledge the effect of materiality of space, it cannot wholly determine performance, whose very execution is intended to consolidate and reaffirm, or challenge dominant meanings. For more reflexive and critical “post-tourist” performances, or rebellious performances, can be acted out which undermine and escape dramatic conventions. The performance of walking has been used to exemplify some of these points, focusing on the different approaches to stylized movement through different forms of space. More qualitative empirical research into the kinds of performances and practices which tourists enact would help to build up a rich understanding of the diverse meanings, identities, conventions, and contestations which are played out in tourist space.