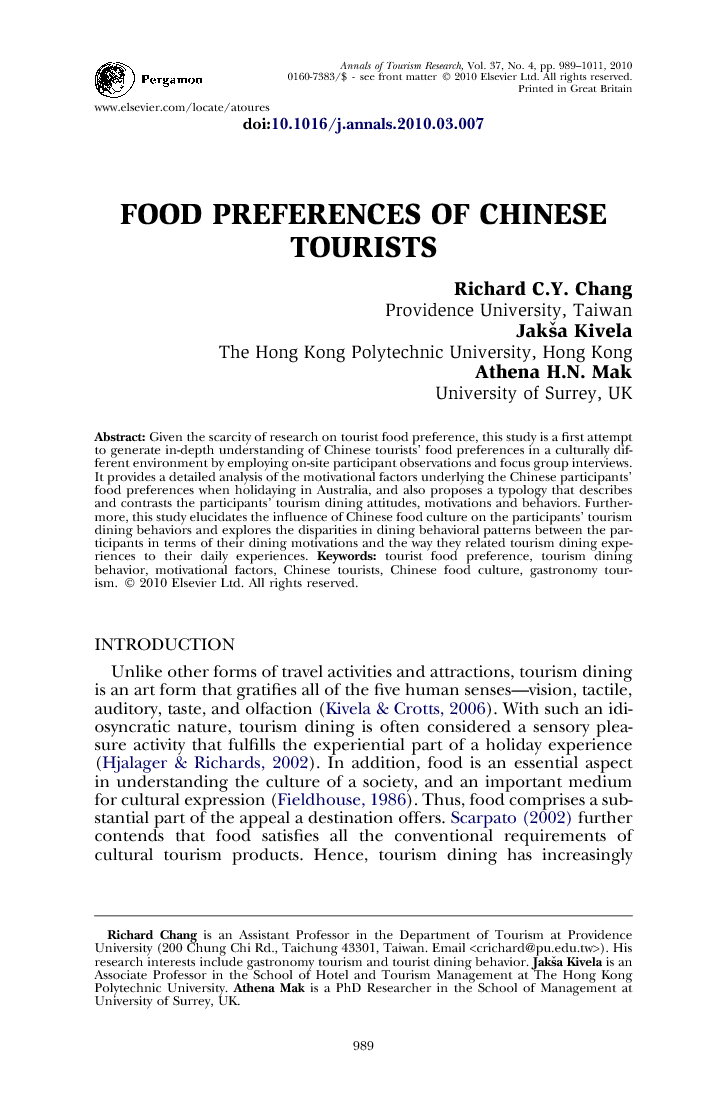 Unlike other forms of travel activities and attractions, tourism dining is an art form that gratifies all of the five human senses—vision, tactile, auditory, taste, and olfaction (Kivela & Crotts, 2006). With such an idiosyncratic nature, tourism dining is often considered a sensory pleasure activity that fulfills the experiential part of a holiday experience (Hjalager & Richards, 2002). In addition, food is an essential aspect in understanding the culture of a society, and an important medium for cultural expression (Fieldhouse, 1986). Thus, food comprises a substantial part of the appeal a destination offers. Scarpato (2002) further contends that food satisfies all the conventional requirements of cultural tourism products. Hence, tourism dining has increasingly become a major conduit for tourists to appreciate the local culture of a destination (Kivela & Crotts, 2006). While it is a widely held belief that food in tourism is a significant “attraction” (Hjalager & Richards, 2002), Cohen and Avieli (2004) however stress that local food at a destination could be an “impediment” under certain circumstances. They point out that local food might become acceptable to tourists only if it is modified to the tourists’ palate, and that the confrontation with “strange” and “unfamiliar” local cuisine might present a considerable challenge for some tourists. Indeed, some tourists may suffer from “food neophobia,” a concept which refers to human’s natural tendency to dislike or suspect new and unfamiliar foods (Pliner & Salvy, 2006). Similarly, Lepp and Gibson (2003) identified “strange food” as one of the seven risk factors perceived by tourists. Hence, destination marketers, hospitality businesses, and tour operators are faced with the challenge of how to appropriately portray and present their local cuisine as an attraction and to mitigate the risk that it will be interpreted as an impediment. Such an endeavor requires an in-depth understanding of tourists’ different food preferences and dining behaviors (Quan & Wang, 2004). Nonetheless, despite the central role of dining in the holiday experience, the interface between food and tourism has received scant research attention. Cohen and Avieli (2004, p. 757) underscore that eating and drinking remain “virtually unexplored in the sociological and anthropological study of tourism, notwithstanding their obvious centrality in the experience.” Although there is a growing interest in research into food experiences in tourism, Kim, Eves, and Scarles (2009) indicate that research on tourist food consumption is at its infancy, and is still establishing its basic tenets. In addition, most of the existing research focus on Western tourists; studies based on non-Western and Asian tourists are scarce. To date, there is no empirical study examining the food preferences and dining behaviors of Chinese tourists, thereby revealing a knowledge gap in understanding this important market segment. Consequently, this study aims to fill part of this gap by investigating Chinese tourists’ food preferences while they are holidaying in Australia. The specific objectives of the study include: to explore Chinese tourists’ food preferences and the motivational factors underlying such preferences, to develop a typology describing Chinese tourists’ tourism dining behaviors, to examine the influences of Chinese food culture on tourists’ dining behaviors, and to identify any intergroup disparities in dining behavioral patterns among the Chinese tourists.

Given the scarcity of research on tourist food preference, this study is a first attempt to generate in-depth understanding of Chinese tourists’ food preferences in a culturally different environment. It provides a detailed analysis of the motivational factors underlying the Chinese participants’ food preferences when holidaying in Australia, and also proposes a typology that describes and contrasts the participants’ tourism dining attitudes, motivations and behaviors. Furthermore, this study elucidates the influence of Chinese food culture on the participants’ tourism dining behaviors and explores the disparities between the participants from Mainland China, Hong Kong and Taiwan, in terms of their tourism dining motivations and the way they related tourism dining experiences to their daily routine experiences. The findings of this study provide useful information for destination marketers and hospitality businesses in developing their gastronomic products and ensuring that food used in catering are congruent with tourists food culture and dining habits (Cohen and Avieli, 2004 and Quan and Wang, 2004). Moreover, tour operators are afforded ideas in facilitating optimal meal arrangements for group tourists. On the other hand, the findings of this study contribute to the sociological and anthropological dimensions of food in tourism in the following ways. First, the findings advance the understanding of tourists’ food preference and the underlying motivational factors from the Chinese perspective, thereby providing theoretical groundwork for further studies on this important market segment. Second, the findings reveal that Chinese food culture exerted significant influence on the dining behaviors of the Chinese participants, supporting that cultural influence is a key determinant affecting tourist food preferences. Third, following on the conceptual model of the tourist experience posited by Quan and Wang (2004), the findings of this study corroborate that the intergroup disparities in dining behavior among the participants from the three regions was related to whether they seek “contrast”, “extension” or “intensification” of their daily experiences from the tourism dining experiences, thereby substantiating the applicability of the conceptual model in the analysis of tourism dining behavior. Finally, the typology proposed offers theoretical insights as well as empirical evidence into the distinctive tourism dining behaviors of the Chinese participants, which is believed to provide a useful starting point for future investigation. It is germane to point out that since this study is of an exploratory nature with no intention to generalize findings, a purposive sample was adopted. Due to practical considerations, tourists who joined all-inclusive package tours were selected instead of individual tourists. While deliberate attempt was made to select those tours with “free choice dining activities”, individual tourists might provide different insights. As such, future research may consider including individual tourists in the investigation. In addition, this study focused on Australia as the only destination in the investigation due to resource constraints. Future research might be directed at examining Chinese tourists’ eating behavior in other Western destinations in order to enhance the generalizability of the results.