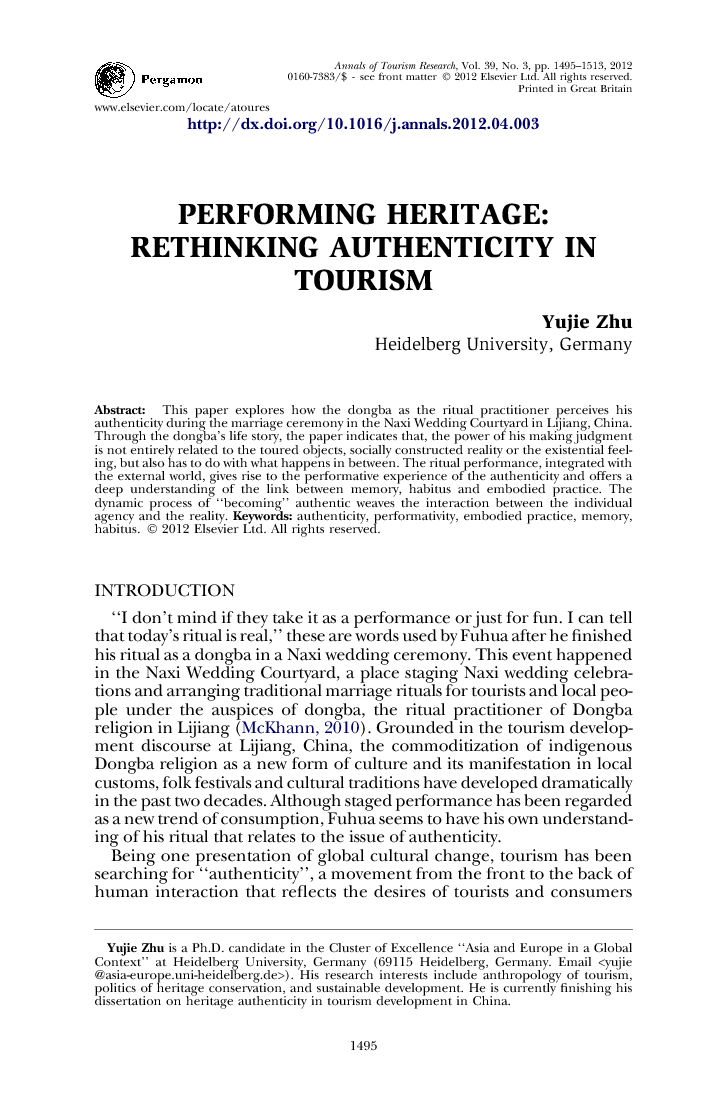 This paper explores how the dongba as the ritual practitioner perceives his authenticity during the marriage ceremony in the Naxi Wedding Courtyard in Lijiang, China. Through the dongba’s life story, the paper indicates that, the power of his making judgment is not entirely related to the toured objects, socially constructed reality or the existential feeling, but also has to do with what happens in between. The ritual performance, integrated with the external world, gives rise to the performative experience of the authenticity and offers a deep understanding of the link between memory, habitus and embodied practice. The dynamic process of “becoming” authentic weaves the interaction between the individual agency and the reality.

“I don’t mind if they take it as a performance or just for fun. I can tell that today’s ritual is real,” these are words used by Fuhua after he finished his ritual as a dongba in a Naxi wedding ceremony. This event happened in the Naxi Wedding Courtyard, a place staging Naxi wedding celebrations and arranging traditional marriage rituals for tourists and local people under the auspices of dongba, the ritual practitioner of Dongba religion in Lijiang (McKhann, 2010). Grounded in the tourism development discourse at Lijiang, China, the commoditization of indigenous Dongba religion as a new form of culture and its manifestation in local customs, folk festivals and cultural traditions have developed dramatically in the past two decades. Although staged performance has been regarded as a new trend of consumption, Fuhua seems to have his own understanding of his ritual that relates to the issue of authenticity. Being one presentation of global cultural change, tourism has been searching for “authenticity”, a movement from the front to the back of human interaction that reflects the desires of tourists and consumers for genuine and credible cultural construction and representation in diverse cultural and heritage contexts. The long term academic discussion on what precisely “authenticity” means to tourism has resulted in three major approaches in conceptualizing the term, namely objective authenticity, constructive authenticity and existential authenticity. However, the existing categories seem to imply a dichotomy of objective-subjective orientation. The reaction to “mediatised, commercialized and socially constructed reality is not a ‘thing’ to possess or ‘a state of mind”’ (Knudsen & Waade, 2010, p. 1), but an instrumental embodiment aroused through the dynamic interaction between individual agency and the external world. In this sense, authenticity is neither objective nor subjective, but rather performative. Different from former studies about authenticity in tourism from the perspective of tourists, this study is mainly based on the view of performers. Taking the life story of a dongba named Fuhua who was born in a Dongba family, trained in the official Dongba Research Institute, and now working as the marriage ritual performer in the Naxi Wedding Courtyard as a case study, this paper aims to explore how this dongba perceives his authenticity of the ritual performance in the marriage ceremony. The notion of performative authenticity here illustrates the dynamic interaction between memory, habitus and embodied practice. The socio-economic and political transition in China, in particular the policy on culture heritage will be used as a window to explore “complex human and social engagement, relations and negotiation” (Crouch, 1999) in the process of tourism development.