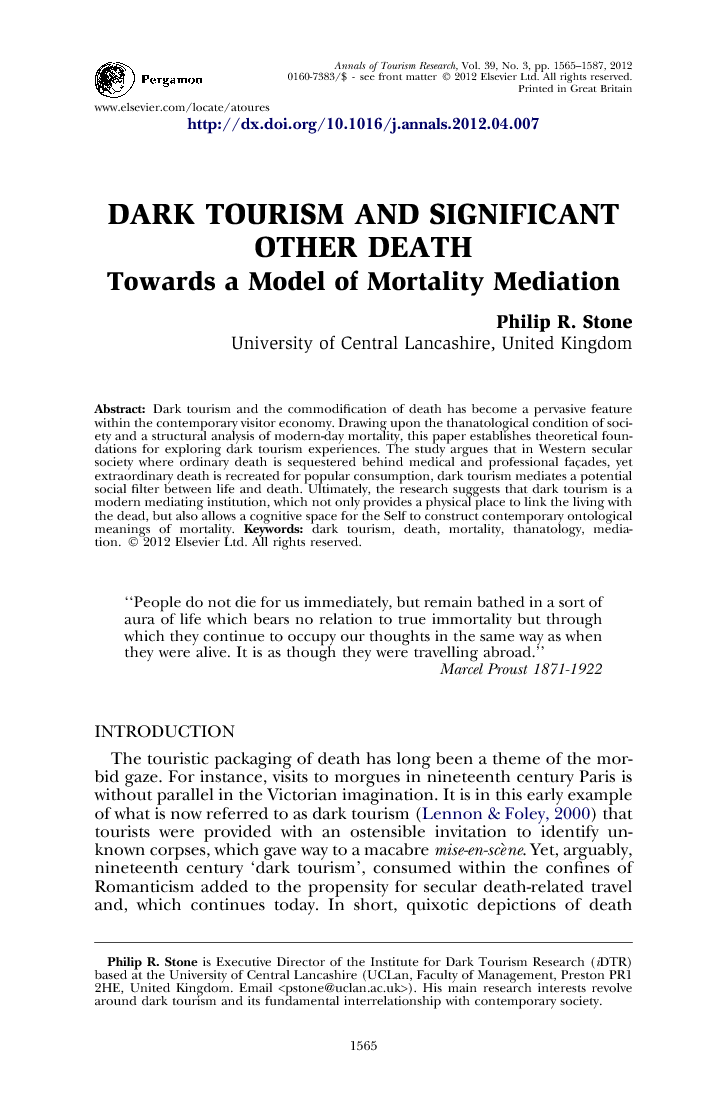 Dark tourism and the commodification of death has become a pervasive feature within the contemporary visitor economy. Drawing upon the thanatological condition of society and a structural analysis of modern-day mortality, this paper establishes theoretical foundations for exploring dark tourism experiences. The study argues that in Western secular society where ordinary death is sequestered behind medical and professional façades, yet extraordinary death is recreated for popular consumption, dark tourism mediates a potential social filter between life and death. Ultimately, the research suggests that dark tourism is a modern mediating institution, which not only provides a physical place to link the living with the dead, but also allows a cognitive space for the Self to construct contemporary ontological meanings of mortality.

The touristic packaging of death has long been a theme of the morbid gaze. For instance, visits to morgues in nineteenth century Paris is without parallel in the Victorian imagination. It is in this early example of what is now referred to as dark tourism (Lennon & Foley, 2000) that tourists were provided with an ostensible invitation to identify unknown corpses, which gave way to a macabre mise-en-scène. Yet, arguably, nineteenth century ‘dark tourism’, consumed within the confines of Romanticism added to the propensity for secular death-related travel and, which continues today. In short, quixotic depictions of death and dying in Romantic art and literature provided for a thanatoptic mediation of death and, subsequently, (re)created death and the dead for (re)evaluation and contemplation for the living (Seaton, 1999). In turn, tourism of the day reflected these contemplative aspects and involved visits to sites of fatality depicted by the Romantic Movement (Seaton, 2010). Importantly, however, modern-day dark tourism does not present death per se, but rather represents certain kinds of death (Walter, 2009). Thus, within Western secular societies that are often labelled death denying—a term rooted in life-prolonging medicinal techniques and pharmacopoeia, as well as disposal of the dead management—ordinary death has largely been removed from the public realm and replaced with media inspired cultural representations of Significant Other Death (Stone, 2011a). Pagliari (2004) laments that while the collective Self has been death-denying due to attitudes towards medicine and mortality, society has subtly transgressed to a death-defying era, where emphasis on health education carry promises of corporeal extension. Pagliari also argues contemporary society is now entering a death-deriding age, where death is mocked, commercialised and sold for the sake of art and entertainment. Moreover, religious institutions, which once formed sacred canopies of mortality guidance, have largely been negated for the secular Self. Dark tourism as a cultural representation of particular death has been referred to as a contemporary mediating institution between the living and the dead (Walter, 2009), whilst Stone (2011a, p. 25) suggests, “dark tourism provides an opportunity to contemplate death of the Self through gazing upon the Significant Other Dead”. Stone, 2011b and Stone, 2012 also argues that dark tourism experiences, at least for some people for some of the time at some sites, is not so much about consuming narratives of death, but, rather, of contemplating life and living in the face of inevitable mortality. Nevertheless, whilst dark tourism and the thanatoptic contemplation of death has been examined (Seaton, 1996, Seaton, 1999, Seaton, 2010, Stone and Sharpley, 2008, Sharpley, 2009a, Stone, 2011a, Stone, 2011b and Stone, 2012), a comprehensive conceptual framework to locate and interrogate dark tourism as a mediating institution of mortality remains elusive. Questions remain as to the type and extent of interrelationships dark tourism has with the broader cultural condition of society. Specifically, how is contemporary death and dying manifested in secularised society? What potential role does dark tourism play in the mediation of contemporary death and dying? In addition, what are the potential consequences of consuming dark tourism within contemporary society? The purpose of this paper, therefore, is to address these questions. Focusing upon the thanatological condition of society—that is, society’s reactions to and perceptions of death—this study examines dark tourism within a structural analysis of mortality. Drawing on previous work of dark tourism consumption within a thanatological framework (Stone, 2009a and Stone and Sharpley, 2008), and adopting a post-disciplinary approach to dark tourism research of increased reasonableness, flexibility and inclusivity (Stone, 2011c), this research seeks to augment theoretical foundations for exploring dark tourism experiences. Particularly, this paper updates and expands earlier conceptual frameworks that correlate dark tourism consumption with modern-day mortality (Stone & Sharpley, 2008). In so doing, the study suggests that within a thesis of death sequestration, a range of contemporary mediating relationships are evident between touristic representations of the dead and broader secular experiences of mortality, albeit to varying degrees and at various dark tourism sites. This study also offers contextualisation of these relationships, rather than empirical testing, by citing four shades of dark tourism (Stone, 2006) namely, the London Dungeon visitor attraction, a Body Worlds Exhibition, Ground Zero, and Auschwitz-Birkenau. Ultimately, the paper provides a conceptual basis for subsequent theoretical and empirical research into dark tourism in particular, whilst contributing to thanatology and the social scientific study of death more generally. First, however, an overview of dark tourism provides a context for the study.

This study arises from a simple, yet fundamental interest in the social reality of death. In particular, the paper set out to examine how and why dark tourism as a cultural representation of death and dying mediates modern-day mortality. Arguably, dark tourism is part of wider death revivalism within popular culture, whereby dark tourism experiences help to de-sequester mortality and to mediate a range of contemporary relationships with the dead. Of course, to live is to die, yet within a secularised contemporary society we have, for many, become divorced from the social reality of death and dying. Instead, we have become enveloped with an almost ubiquitous (re)creation of death, where Other death is consumed at a distance and mediated through popular culture and the media. In lieu of traditional religious structures that offer guidance, control and, ultimately, a social filter to our sense of finitude, contemporary mediating institutions of mortality offer (re)presentations of tragedy and death that have perturbed our individual and collective consciousness. Dark tourism is such an institution and joins a family of institutions found in broader popular culture that mediate mortality. As such, dark tourism experiences, albeit to varying levels of intensity and at various sites, can engender a degree of thanatopsis and meanings of ontology, where visitors may reflect on dark tourism and contemplate both life and death through a mortality lens. Of course, future research avenues remain as to whether dark tourism will invoke a greater or lesser extent of ontological (in)security, and whether packaged-up death provides reassurance or threatens an individuals’ life-world. Nevertheless, against a conceptual framework of death sequestration, dark tourism can help link the living with its dead. However, motivation to consume dark tourism is not to experience death per se, but, rather, potential consequences of dark tourism experiences revolve around mortality narratives and education, entertainment, memorialisation, and moral instruction, as well as memento mori. Indeed, in a contemporary age of institutionally sequestered death, (re)presenting Significant Other Death within dark tourism has important relationships for meditating mortality and linking the living with its resurrected dead. Therefore, dark tourism as an institution is added to a range of contemporary reflexive mechanisms that the Self may draw upon in order to help construct mortality meaning. As the summative model in Figure 3 illustrates, dark tourism is a new mediating institution of mortality within secularised death sequestered societies. Indeed, dark tourism may not only provide a physical place to link the living with the dead, but also allows a cognitive space for the Self to construct contemporary ontological meanings of mortality. It is dark tourism experiences that tourists may reflect and contemplate, however briefly, both life and death through consuming the Significant Other Dead. Of course, the relationship of the living with its dead is complex and operates within a milieu of religious edicts and secular assertions. Even so, the living can mediate with its dead through a social filter of dark tourism, though importantly, cultural differences and chronological distance, as well as issues of age and health status of individual tourists’ may limit this social filter. Consequently, the emergent theoretical framework outlined in this paper might be used as a basis to frame future phenomenological empirical research, within a variety of socio-cultural environments and at different dark tourism sites, thereby testing the level of support of dark tourism as a contemporary mediating institution of mortality. Specifically, future research might address dichotomic social scientific-religious tensions of how dark tourism not only provides for mediation of mortality for the Self, but also how dark tourism can cast a critical reflection of how secular societies deal with death. This is particularly so if the resurrected Significant Other Dead are conceived to represent various dichotomous socio-cultural or technological relations that may collide within secular society and, thus, contest narratives of both living and dying. Ultimately, however, in a contemporary secular age where ordinary death is hidden behind medical and professional façades, yet extraordinary death is recreated for popular consumption, dark tourism plays a potential mediating role between life and death. As such, the dead have always been guardians of the living, either through religious rituals or by secular myth making. To that end, dark tourism in death sequestered secular societies and the range of mediating relationships of mortality that may transpire, plays a unique role in our existential saliency.