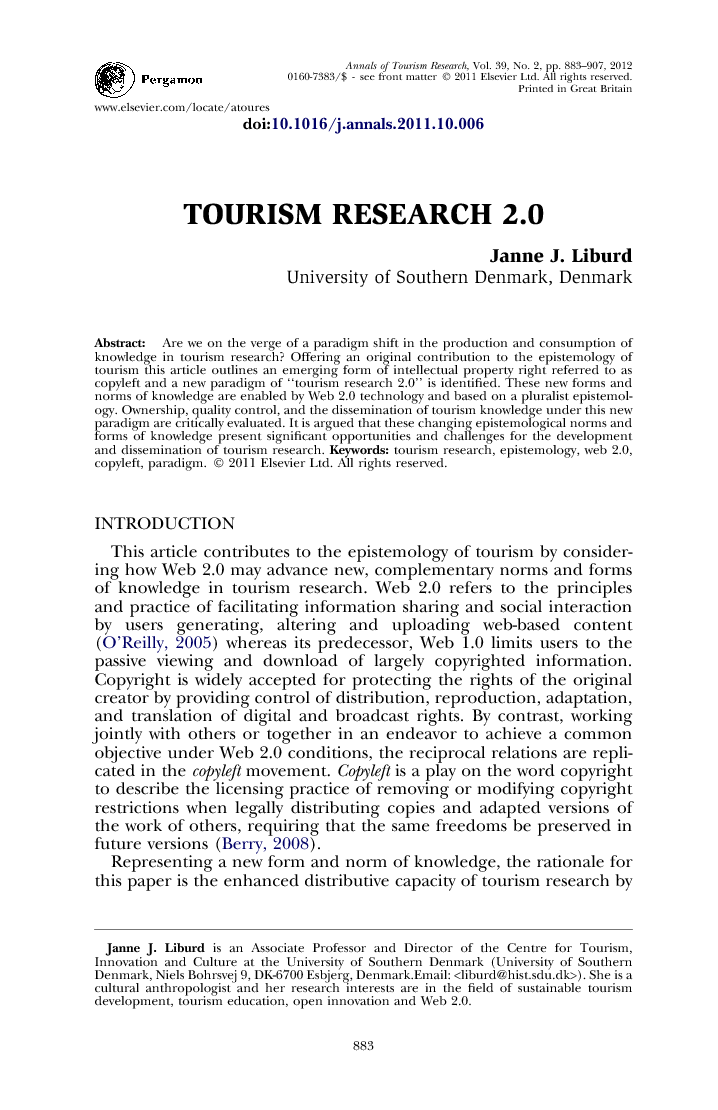 Are we on the verge of a paradigm shift in the production and consumption of knowledge in tourism research? Offering an original contribution to the epistemology of tourism this article outlines an emerging form of intellectual property right referred to as copyleft and a new paradigm of “tourism research 2.0” is identified. These new forms and norms of knowledge are enabled by Web 2.0 technology and based on a pluralist epistemology. Ownership, quality control, and the dissemination of tourism knowledge under this new paradigm are critically evaluated. It is argued that these changing epistemological norms and forms of knowledge present significant opportunities and challenges for the development and dissemination of tourism research.

This article contributes to the epistemology of tourism by considering how Web 2.0 may advance new, complementary norms and forms of knowledge in tourism research. Web 2.0 refers to the principles and practice of facilitating information sharing and social interaction by users generating, altering and uploading web-based content (O’Reilly, 2005) whereas its predecessor, Web 1.0 limits users to the passive viewing and download of largely copyrighted information. Copyright is widely accepted for protecting the rights of the original creator by providing control of distribution, reproduction, adaptation, and translation of digital and broadcast rights. By contrast, working jointly with others or together in an endeavor to achieve a common objective under Web 2.0 conditions, the reciprocal relations are replicated in the copyleft movement. Copyleft is a play on the word copyright to describe the licensing practice of removing or modifying copyright restrictions when legally distributing copies and adapted versions of the work of others, requiring that the same freedoms be preserved in future versions (Berry, 2008). Representing a new form and norm of knowledge, the rationale for this paper is the enhanced distributive capacity of tourism research by Web 2.0 practices of bottom-up, interactive and open collaboration in online content generation (Benkler, 2006 and Tapscott and Williams, 2006). While easily dismissed as untrustworthy due to “the ignorance of the crowds” (Carr, 2007) and unawareness of academic standards, the closed-system tendencies of knowledge production in tourism research are in need of critical inquiry. Referred to as ‘tourism research 2.0’ the propensities to engage in research are no longer largely generated by internal stimuli; nor are research activities validated through responses from the relatively closed circle of international scholarship (Birch, 1988). Also attempting to overcome the limited role of research journals in knowledge transfer (Cooper, 2006, Frechtling, 2004, Howey et al., 1999 and Xaio and Smith, 2007) this article considers how open publication based on copyleft principles has the potential to create new and richer streams of knowledge. As a complementing form of knowledge it will be argued that we may be on the verge of a paradigm shift in the current production and consumption of knowledge in tourism research. More recently, the Organization for Economic Cooperation and Development ( OECD, 2008 and OECD, 2011) and the Swedish Research Council (2009) have actively pushed for making publicly funded research results accessible and ‘giving knowledge for free’, in the words of the OECD (2008). Further substantiating the significance of this article, there is a need to cultivate critical awareness of the changing knowledge monopolies and the new norms of openness in scientific knowledge development in order to direct future research in tourism. The aim of this article is twofold. First, the epistemic question of tourism knowledge, validity and ownership will be opened by applying these criteria to knowledge production under Web 2.0 conditions. Second, copyrighted knowledge is contrasted against the so-called copyleft paradigm, which more openly invites knowledge reuse by copying, remixing and transformation with limited acknowledgement of the original authors. By bringing together these two strands of inquiry as different but complementary ways of knowing, issues of ownership, quality control, and the transformation of scientific tourism knowledge in different contexts will be critically discussed. It will be argued that the changing epistemological norms offered by Web 2.0 and the copyleft movement are of growing significance and may herald fundamental challenges and changes in the future development and dissemination of tourism research. The structure of this paper is as follows. First, the current paradigm of valid tourism knowledge will be explored as a form and norm of knowledge, in which peer review occupies a central position. Next, the analysis turns to tourism research 2.0 and the transformation from closed, controlled and copyrighted research and dialogical forms of reconstruction. Third, concerns over openness in the ownership and production of knowledge that may bring an erosion of confidence in the rigor of research are addressed by a critical discussion of validity and quality mechanisms in tourism research 2.0. Drawing on Boisot’s (1998) notion of a “pluralist epistemology”, it will be concluded that the inherent aspects of openness and degrees of freedom in tourism research 2.0 may well be seen as messy and more difficult to handle. However tourism research 2.0 may augment tourism research by potentially encompassing multiple worldviews, contexts, cultural differences and research norms (Pritchard & Morgan, 2007: 11) that may be more readily adapted and communicated among different audiences.

Introduced as a complementary way of knowing, tourism research 2.0 draws on Habermas, 1984 and Habermas, 1987a theory of communicative action and Boisot’s (1998) notion of a pluralist epistemology. Following epistemological inquiry into how the current paradigm of valid tourism knowledge is constituted as a form and norm of scientific knowledge, in which peer review and referencing are key elements, it was argued that conventional practices are challenged by new relations, attitudes, and norms for interaction that are enabled by Web 2.0 technologies. Rather than emulating an epistemology that confines tourism research to a closed expert system, tourism research 2.0 thrives on the replacement of knowledge with a capital “K” and giving way to a pluralist epistemology. As another but complementing form of knowledge development, the analysis presented is less about traditional academe adapting to the new norms of tourism research 2.0 as it is about understanding the epistemic complementarities and that we are possibly on the verge of a paradigm shift in the production and consumption of knowledge in tourism research. The argument contains a sense that certain forms of knowledge are worthwhile but that, by themselves, they may be inadequate and that their undue influence has had and may have consequences (Barnett, 2011: 148). As opposed to many other scientific domains, tourism research is already informed by multiple epistemologies, disciplines and methodologies. The tourism academy should therefore be in a prime position to embrace the challenge of new knowledge contributors through reciprocal exchanges, communicative action and open dialogue to effectively harness the richer flows and new opportunities for the dissemination of knowledge. Increasing the epistemological richness and diversity through unleashing potentials of contributing individuals, resources and content can be tailored to a multitude of specific use-contexts. Contrary to Tribe’s (2010) argument these need not be secured through “strong networks” or established communities of practice but coexist in online, open, and ceaselessly changing relations. Noteworthy limitations of tourism research 2.0 are the issues of quality control and peer assessment in open research in order to ensure that rigorous research stand out from the majority of online contributions. Offering a progress for future research in this direction, Heidegger’s (2000) method of poetics is informative. Uncovering the original meaning of poetics, poeisis the task is to bring forward in harmony with the world something that was not there. The opposite of poeisis is a challenging-forth (Heidegger, 2000: 320) meaning to exploit, rip out of nature, to put into hierarchies, resources and systems and turn into standing reserve. The notion of poeisis is integral to the norms of tourism research 2.0 and understanding epistemic development on a broader level while recognizing the diversity inherent in tourism as a form of knowledge. Turning towards poeisis in the formation of research groups, engaged individuals are committed to ‘bringing forth’ and unleashing new knowledges in the field of tourism. In tourism, there has been little practical experience as yet of Web 2.0 contributing to discursive action among different audiences, but this article encourages such a consideration and that further research will promote greater understanding of tourism’s pluralist epistemology and transformative potentials. Doing so ‘in harmony with the world’ beacons ethical action and dissemination of research findings “where we genuinely believe our work will have the greatest good” (Wheeller, 2010: 81) in order to contribute to “the task of tourism world-making” (Tribe, 2002: 355). The challenges and critical reflections presented by tourism research 2.0, including the copyleft movement, new forms and norms of open knowledge dissemination also call for a broader political vision for the future to transform challenges into opportunities. This may ultimately require a profound rethinking of current institutional architectures and systems of governance. For it is possible that that twentieth century structures and conventions may present obstacles for harnessing the full potentials of knowledge flows unleashed by Web 2.0.