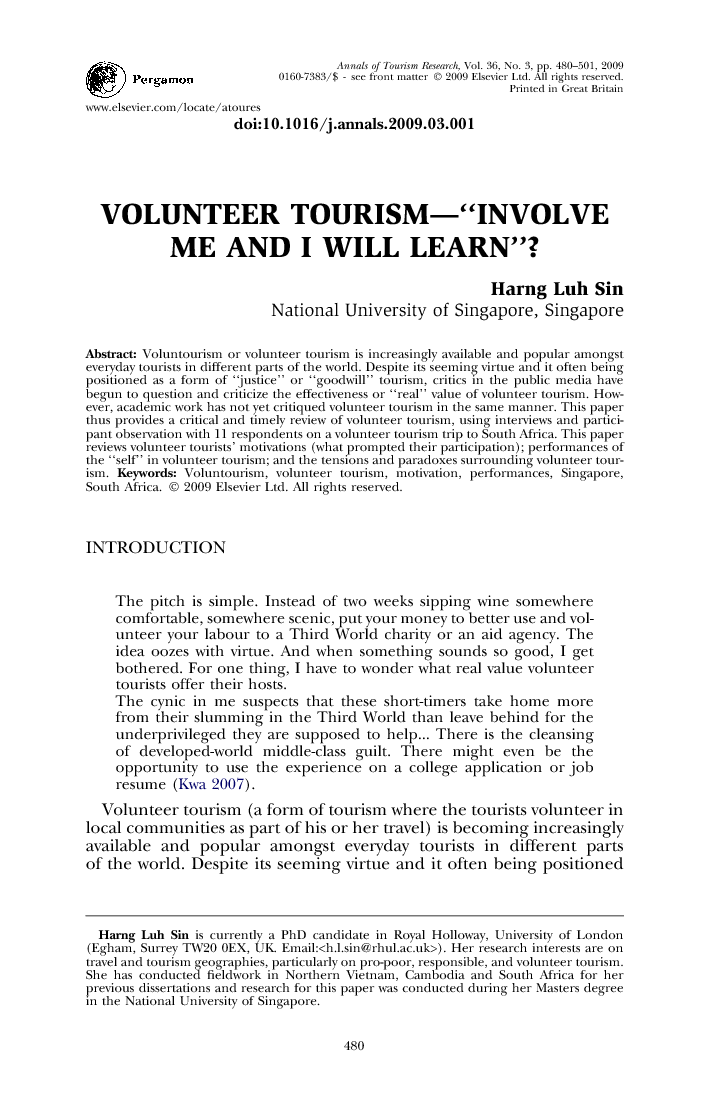 The pitch is simple. Instead of two weeks sipping wine somewhere comfortable, somewhere scenic, put your money to better use and volunteer your labour to a Third World charity or an aid agency. The idea oozes with virtue. And when something sounds so good, I get bothered. For one thing, I have to wonder what real value volunteer tourists offer their hosts. The cynic in me suspects that these short-timers take home more from their slumming in the Third World than leave behind for the underprivileged they are supposed to help... There is the cleansing of developed-world middle-class guilt. There might even be the opportunity to use the experience on a college application or job resume (Kwa 2007). Volunteer tourism (a form of tourism where the tourists volunteer in local communities as part of his or her travel) is becoming increasingly available and popular amongst everyday tourists in different parts of the world. Despite its seeming virtue and it often being positioned as a form of “justice” or “goodwill” tourism (see Butcher, 2003, Scheyvens, 2007 and Stoddart and Rogerson, 2004), critics in the public media (usually in the form of newpaper commentaries as cited above) have increasingly begun to question the effectiveness or “real” value of volunteer tourism (Bennett, 2008 and Bowes, 2008; Judith Brodie, cited in Griffiths, 2007, Kwa, 2007, Mahti, 2007 and Sudderuddin, 2007). Between those who applaud volunteer tourisms’ presupposed benefits and those who prefer to take a more cynical view towards the phenomena, there is arguably a lack of a middle-ground with substantial research that presents a balanced view of volunteer tourism for what it really is. Most interestingly, there appears to be a dearth of academic pieces that have taken a critical view of volunteer tourism. For the increasing numbers of lay people interested in volunteer tourism and the agencies providing “voluntourism vacations”, there is a critical need for research to provide a firm foundation for a deeper understanding of volunteer tourism—in both its positive and negative aspects. This paper acknowledges this need, and focuses in particular on individual volunteer tourists’ experiences, using fieldwork with a group of volunteer tourists from the student-formed team “Action Africa” from the National University of Singapore. This paper begins with an exploration of respondents’ motivations for participating in volunteer tourism, followed by a discussion on how particular motivations, perspectives and objectives of volunteer tourism is “performed” on the ground. This research has found that at least within the group of 11 volunteer tourists interviewed, motivations often revolved around the desire to travel or to visit a different or “exotic” destination. Also, while volunteer tourists interviewed did allude to some changes in opinions after their experiences, it was inconclusive as to whether this has led to substantial changes in their value-system, social consciousness, or willingness to volunteer in other arenas after their volunteer tourism experience. This is contrary to earlier findings by other authors that has mostly suggested that volunteer tourism has very direct and tangible positive outcomes amongst volunteer tourists (Broad, 2003, Brown and Morrison, 2003, Campbell and Smith, 2006, Halpenny and Caissie, 2003, McGehee and Santos, 2004, McIntosh and Zahra, 2007, Scheyvens, 2002, Scheyvens, 2007, Stoddart and Rogerson, 2004, Uriely et al, 2003, Wearing, 2001, Wearing, 2003 and Zahra and McIntosh, 2007). The aim of this paper is thus to uncover the underlying tensions surrounding these motivations and performances and discuss what indeed the aims of volunteer tourism projects are, who determines these aims, and how differing notions are continually performed and negotiated throughout the entire volunteer tourism experience.

Through an in-depth study of 11 volunteer tourists from Singapore, this article has highlighted various observations about volunteer tourists’ motivations, performances, as well as the tensions and paradoxes in volunteer tourism. Interestingly, this study has found that at least among those interviewed, motivating factors for volunteer tourists were “to travel” rather than “to contribute” or volunteer. Volunteering in the local community was also but one of the many means of travelling to different destinations to “learn about local cultures” or to “go beyond superficial tour packages where you don’t see how people really live” (interviews with Betsy, Jacky, and Stephen in 2004). In the section on performances in volunteer tourism, it was also revealed that volunteer tourism was often used as an experience (often reflected in resumes and casual conversations with friends and acquaintances) which volunteer tourists used to perform a “self” suggesting that he or she was a conscious and worldly tourist or individual. This emphasis on the “self” is perhaps already acknowledged in an understated manner among many involved in organizing volunteer tourism. However, instead of leaving such emphasis on the “self” in the background, it is important to realize upfront that many volunteer tourists are typically more interested in fulfilling objectives relating to the “self”. This puts away the altruistic perception of volunteer tourism and allows one to critically assess the nature of volunteer tourism much like any other form of tourism—whether considered as mass or alternative tourism. Indeed, the section on tensions and paradoxes in volunteer tourism highlights the tensions between the differing objectives between funding bodies, versus those of the volunteer tourists themselves. In summary, this paper elucidated that volunteer tourism could indeed be reinforcing negative stereotypes of aid-recipients as inferior or less-able through the process of “othering” by volunteer tourists. Also, if volunteer tourism continues to be organized in an apolitical manner that neglects critical engagement with issues of democracy and active citizenship, it could easily fail to achieve its purported intentions of being “pro-poor” or addressing social inequalities. Continual and critical reviews of volunteer tourism are thus needed as it emerges with growing popularity. Indeed, tourism forms have been and will continue to tend towards addressing social and environmental “responsibilities” and it is vital for tourism researchers to dwell in detail on the complex issues encountered by tourists, locals at host communities, and businesses or private organizations providing such responsible tourism options. It is hoped that this study has addressed one of the many angles in volunteer tourism and have provided interesting insights on the individuals’ experience in volunteer tourism. This paper, however, is but a starting point for further research and discussion. Most importantly, more research focusing on the perspectives of the aid-recipients of volunteer tourism is needed. Further research could, for example explore the power relations arising from volunteer tourism within host-communities, especially in terms of the relations between funding organizations and local partners in host-communities, and how different stakeholders negotiate their power or lack of it in attaining their own agendas.