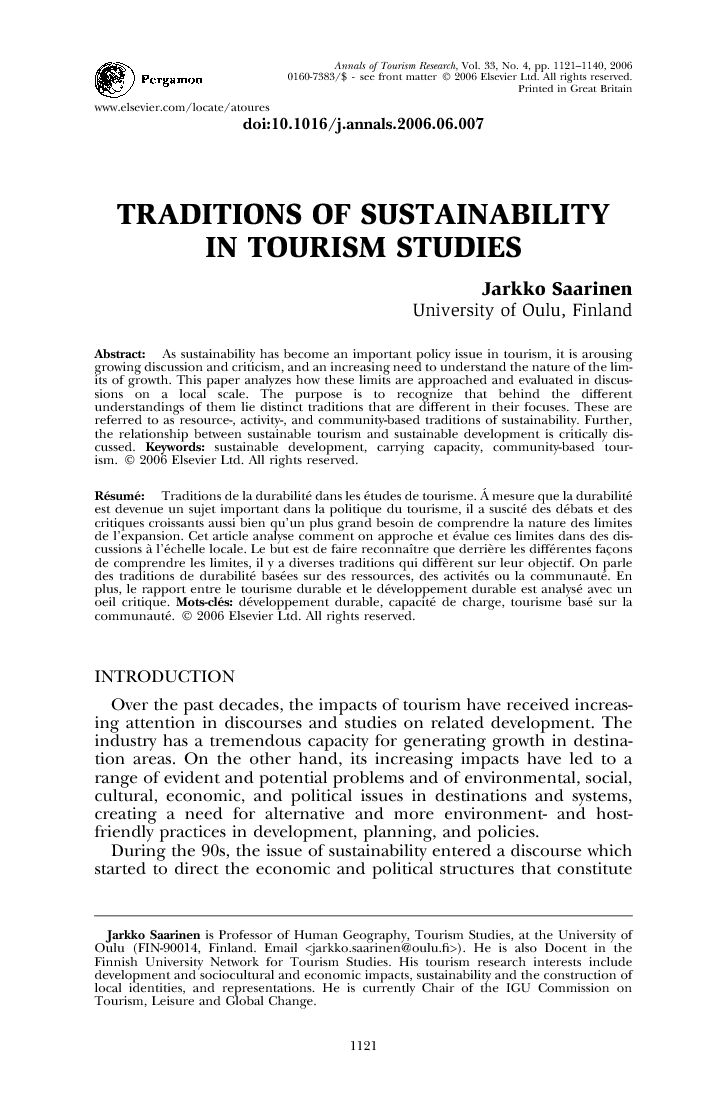 As sustainability has become an important policy issue in tourism, it is arousing growing discussion and criticism, and an increasing need to understand the nature of the limits of growth. This paper analyzes how these limits are approached and evaluated in discussions on a local scale. The purpose is to recognize that behind the different understandings of them lie distinct traditions that are different in their focuses. These are referred to as resource-, activity-, and community-based traditions of sustainability. Further, the relationship between sustainable tourism and sustainable development is critically discussed.

Over the past decades, the impacts of tourism have received increasing attention in discourses and studies on related development. The industry has a tremendous capacity for generating growth in destination areas. On the other hand, its increasing impacts have led to a range of evident and potential problems and of environmental, social, cultural, economic, and political issues in destinations and systems, creating a need for alternative and more environment- and host-friendly practices in development, planning, and policies. During the 90s, the issue of sustainability entered a discourse which started to direct the economic and political structures that constitute the present larger context of the tourism system, the industry and its development (Bramwell and Lane, 1993 and Mowforth and Munt, 1998). The major academic concern over its negative effects dates back at least to the 60s, however, and to the tradition of research into carrying capacity. Over two decades, this idea formed a basis for approaching and managing negative impacts, but after the period of enthusiasm from the late 60s to the early 80s, it was realized that carrying capacity could be problematic both in theory and in practice (O’Reilly, 1986 and Wall, 1982). By the early 90s, this issue was largely replaced in research and development discourses by the idea of sustainable tourism. Nowadays sustainability can be linked to almost all kinds and scales of tourism activities and environments (Clarke 1997), but there is also increasing criticism of the idea, its practices, and its usability (Garrod and Fyall, 1998, Hunter, 1995, Liu, 2003 and Sharpley, 2000). Surprisingly, many challenges outlined for sustainable tourism appear rather similar to past issues concerning carrying capacity. Therefore, it is easy to agree with Butler (1999:15) when he asks critically whether the current ideas and discussions of the former are anything new. The purpose of this paper is to analyze the idea and nature of sustainable tourism and especially how the limits of growth are characterized, known, and set in principle. The work is conceptual in nature, but rather than providing a comprehensive definition of the concept or accepting any single definition of sustainable tourism, or carrying capacity for that matter, the purpose here is to recognize that behind the different understandings of the limits of growth there lie several distinct traditions that differ in focus and in their relation to the resources used in destinations. These traditions are characterized by different ontological ideas of the general nature and character of the limits of growth, different epistemological perspectives on them, and how they can be known and defined. The analysis is based on previous studies of tourism and its limits of growth. Although the impacts of the industry are increasingly global, the main focus of research, management, and policy activities has been on local character and its consequences, which is the scale of analysis adopted here. However, there is a growing need to recognize global-scale issues and responsibilities in development as well. The conditions under which (sustainable) tourism could represent a tool for wider sustainable development are discussed in the conclusions.

The idea and definition of sustainability are major challenges for tourism studies and the industry. The three traditions identified here represent different aspects and elements of the idea of sustainability on a local scale. The resource-based tradition reflects the limits of the natural or original conditions of the related resources and the needs to protect nature (natural capital) and the local culture (cultural capital) from unacceptable changes caused by tourism activities. The activity-based tradition refers to the resource needs of the industry with respect to its present and future development, aiming to sustain the economic capital invested in tourism. The community-based tradition stresses the wider involvement and empowerment of various actors, especially host communities, in development by emphasizing the elements of social capital in a local context. All these perspectives have their advantages, but also limitations and different outcomes if utilized in (sustainable) tourism processes. The resource-based tradition reflects discussions concerning the limits to growth and the existence of a certain limit that cannot be overstepped or negotiated. In tourism discussions it has been grounded in a theoretically thin surface of carrying capacity studies focusing on local-scale processes. Although the resource-based tradition does not necessarily mean that developmental impacts are excluded, it may still be too restrictive a foundation on which to define the limits of growth for a form of sustainable tourism that would also be economically viable. As stated by Cater, “true sustainability includes the human dimension,” which means the use of natural capital in tourism activities and often major changes in the environment (1993:89). Because of the limited focus of resource-based carrying capacity, McCool and Lime have even suggested that “it is now time to bury the concept of numerical tourism and recreation carrying capacity” (2001:385). In contrast, the activity-based tradition demonstrates the present and relatively widely accepted hegemonic idea of sustainability. It reflects the idea that tourism as (a tool for) development can contribute to sustainability, but it also strongly represents the industry’s perspective, from which growth and its needs are conditions for justifying sustainability: the objective and driving force is to sustain tourism and its resource base for the future needs of the industry. In this respect the environment and local communities and cultures are the resources, and as critically noted by Mowforth and Munt, this current emphasis on sustainable tourism may represent the mainstream industry’s attempt to invent a new legitimatization for itself: “‘sustainable’ and ‘rational’ use of the environment, including the preservation of nature as an amenity for the already advantaged” (1998:96). The question of whether there should be tourism or not is an impossible or irrelevant one in the present context, given the current management of (activity-based) sustainability. Instead, the issue is what kind of tourism there can be for development to take place, and how much: the position (existence) of the industry is taken for granted. As a result, it has not been easy to transpose the principles of sustainable development onto tourism as a specific economic and social activity (Sharpley, 2000 and Wall, 1993).