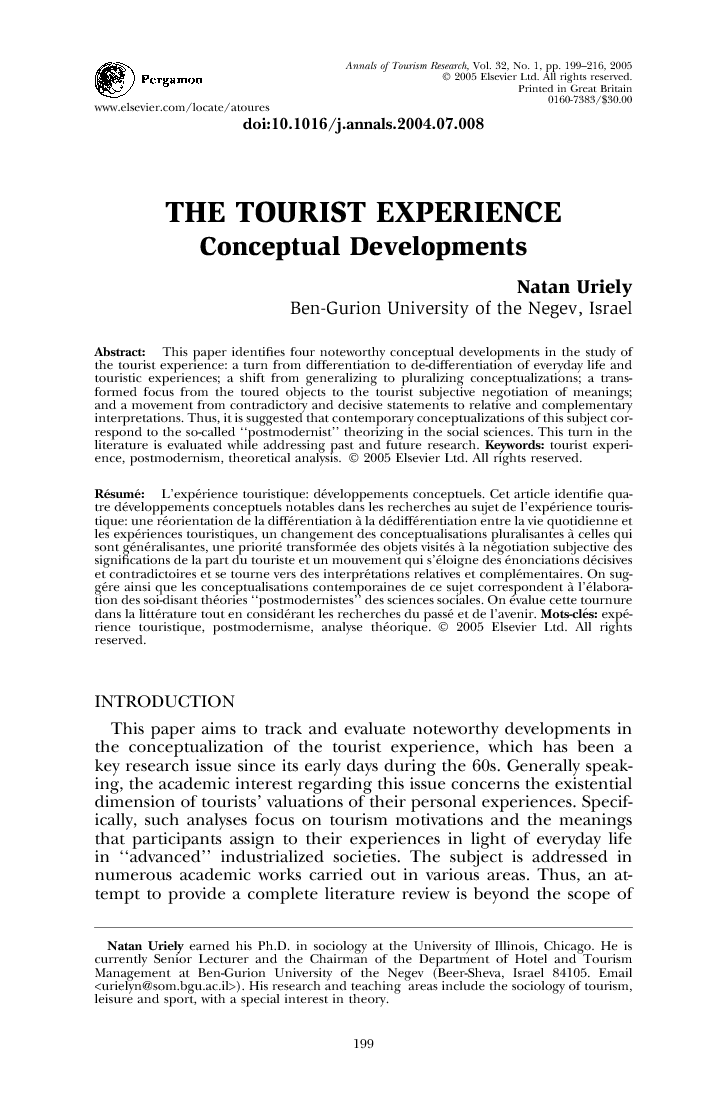 This paper identifies four noteworthy conceptual developments in the study of the tourist experience: a turn from differentiation to de-differentiation of everyday life and touristic experiences; a shift from generalizing to pluralizing conceptualizations; a transformed focus from the toured objects to the tourist subjective negotiation of meanings; and a movement from contradictory and decisive statements to relative and complementary interpretations. Thus, it is suggested that contemporary conceptualizations of this subject correspond to the so-called “postmodernist” theorizing in the social sciences. This turn in the literature is evaluated while addressing past and future research.

This paper aims to track and evaluate noteworthy developments in the conceptualization of the tourist experience, which has been a key research issue since its early days during the 60s. Generally speaking, the academic interest regarding this issue concerns the existential dimension of tourists’ valuations of their personal experiences. Specifically, such analyses focus on tourism motivations and the meanings that participants assign to their experiences in light of everyday life in “advanced” industrialized societies. The subject is addressed in numerous academic works carried out in various areas. Thus, an attempt to provide a complete literature review is beyond the scope of this paper. Instead, the focus here is on identifying and evaluating major developments in the conceptualization of the experience. Specifically, by reviewing relevant literature across various topics, including the definition of the tourist role, typologies, authenticity, postmodern, and heritage tourism, four developments emerge: a reconsideration of the distinctiveness of tourism from of everyday life experiences; a shift from homogenizing portrayals of the tourist as a general type to pluralizing depictions that capture the multiplicity of the experience; a shifted focus from the displayed objects provided by the industry to the subjective negotiation of meanings as a determinant of the experience; and a movement from contradictory and decisive academic discourse, which conceptualizes the experience in terms of absolute truths, toward relative and complementary interpretations. The current analysis suggests that these changes in conceptual trends involve a change in the style of academic theorizing. The conceptualizations derive from various theoretical frameworks, including phenomenology (Cohen 1979; Uriely, Yonai and Simchai 2002), a neo-Durkheimian perspective (MacCannell 1973), Goffmanian role-theory (Wickens 2002), conflict and cultural criticism (Barthes 1972; Boorstin 1964; Turner and Ash 1975), and a constructivist narrative-oriented approach (Elsrud 2004), but without attempting to endorse any of them. Instead, these are characterized and evaluated hereafter according to another theoretical construct, that of the distinction between “modernist” and “postmodernist” forms or styles of academic knowledge (Bauman, 1987 and Bauman, 1992; Denzin 1991; Flax 1990; Frazer 1989; Hollinshead 2002; Ryan 2002; Uriely 1997). In line with this distinction, it is argued that while the early theories comply with the notion of modernist academic knowledge, contemporary conceptualizations of the same correspond to postmodernist modes of analysis.