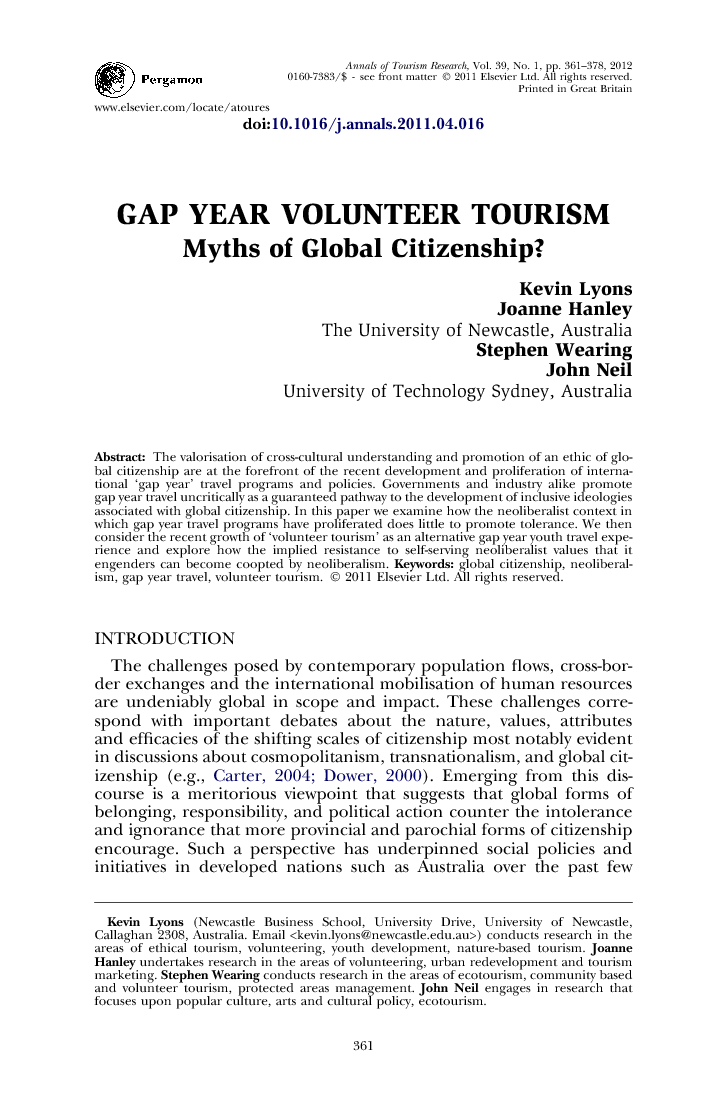 The valorisation of cross-cultural understanding and promotion of an ethic of global citizenship are at the forefront of the recent development and proliferation of international ‘gap year’ travel programs and policies. Governments and industry alike promote gap year travel uncritically as a guaranteed pathway to the development of inclusive ideologies associated with global citizenship. In this paper we examine how the neoliberalist context in which gap year travel programs have proliferated does little to promote tolerance. We then consider the recent growth of ‘volunteer tourism’ as an alternative gap year youth travel experience and explore how the implied resistance to self-serving neoliberalist values that it engenders can become coopted by neoliberalism.

The points we raise in this paper challenge fundamental but largely untested assumptions about gap year travel in general and more specifically as it manifests as a form of volunteer tourism. It is evident that a number of questions remain unanswered: does an experience where gap year tourists interact with community members from different cultures actually change the tourist’s world view? More specifically, does the use of direct volunteer tourism experiences create the basis for a less racist or stereotypical perception of other cultures? That is, does the gap year reduce the way we ‘other’ developing country cultures? We conclude here by suggesting that despite the rhetoric that links gap year tourism with global citizenship such an association remains empirically unsupported. The following highlights the limitations of the research conducted on gap year tourism and volunteer tourism specifically. Gap year tourism has gained wide recognition and approval in developed countries, particularly in British society in recent years. It is not surprising, therefore, that scholars have predominately focused on the phenomenon in the British context (Heath, 2007, Jones, 2004, Jones, 2005, Simpson, 2004 and Simpson, 2005). As such, studies that have been conducted on gap year tourism so far are limited in size and scope and are almost exclusively based on data collected in the UK. Another major limitation of empirical research thus far conducted into gap year tourism is that where survey-based studies are used, they tend to use small sample sizes that do not support generalisable analyses of the relationships between participant backgrounds, the broader impact of their gap year experience and the nature and structure of the tourism activity undertaken. Furthermore, there has been little academic investigation into whether gap year tourism, even when it incorporates volunteering, may actually hinder career development. Indeed, Jones’ (2008) work on this issue questions whether medical students (such as junior doctors) could be committing career suicide by taking this time off. Leigh’s (2006) critical analysis of the process of reassimilation into home environments upon return from an overseas volunteering experience also suggests that the skill development advantages of the gap year is unfounded. Volunteer tourism has been described as a powerful tool for social development and an agent for sustainable growth (McGehee & Santos, 2005), particularly in developing nations (Wearing, 2001). The existing research in this area is limited to examining the challenges and issues faced by NGOs that develop volunteer projects in developing countries. However, there is a dearth of research on the fast-growing supply of commercial volunteer tourism products. There is virtually no empirical data that describes the practices or impacts of commercial volunteer tourism activities outside of the anecdotal and critical/theoretical work that posits NGO-based volunteer tourism as ‘all good’ and corporate and commercial interests as ‘all bad’ (cf. Ponting et al., 2005 and Wearing and McDonald, 2002). Moreover, there is insufficient research that explores the supply of gap year services as they manifest in specific cultural contexts (Lyons & Wearing, 2008). To date, research on host communities is still relatively limited and focuses primarily on the voices of NGOs and community leaders. We suggest that this research needs expanding and should explore the voices of under-represented stakeholders such as minority groups in villages where gap year tourists and volunteers may inadvertently act to further marginalise them. We also argue that host community impacts are under-researched. Little is known about the short and long term social, economic, and cultural benefits that gap year tourism and volunteer tourism brings. It is evident that the little research which has emerged on gap year tourism is somewhat ad-hoc and currently lacks a coordinated framework for further development. Moreover, the qualitative case studies that dominate volunteer tourism research rely heavily upon snowball and convenience sampling rather than being driven by criterion-based purposive sampling. There is a need for research to be conducted that quantitatively analyses broad-based survey data for relationships between the range of variables that affect volunteer tourism experiences while providing a foundation for a criterion-driven qualitatively rich examination of how those relationships manifest. Proponents of gap year volunteer tourism argue that it instils in participants an openness to and acceptance of other cultures, and fosters notions of cultural sensitivity, cultural awareness and empathy towards others that together enables them to develop capacities, attributes and values apposite to a global citizenry (Callanan and Thomas, 2005 and Matthews, 2008). We have argued here that while pathways to global citizenship may exist within the context of gap year tourism through volunteer programs, the cooptation of this form of travel by the neoliberal agenda is becoming increasingly evident. The current gap year volunteer industry does not address issues of Western privilege and power, and actively promotes the “simplistic binaries of ‘us and them’” (Simpson, 2004, p. 690) thereby perpetuating the inequalities associated with colonialism. We suggest that to disturb this status quo it is of crucial importance that researchers develop empirical evidence that can provide a deep and critical understanding of gap year volunteer tourism. This evidence is essential for informing the best practices of NGOs, commercial service providers and governments that develop in gap year volunteer tourists competencies and capabilities of global citizenry.