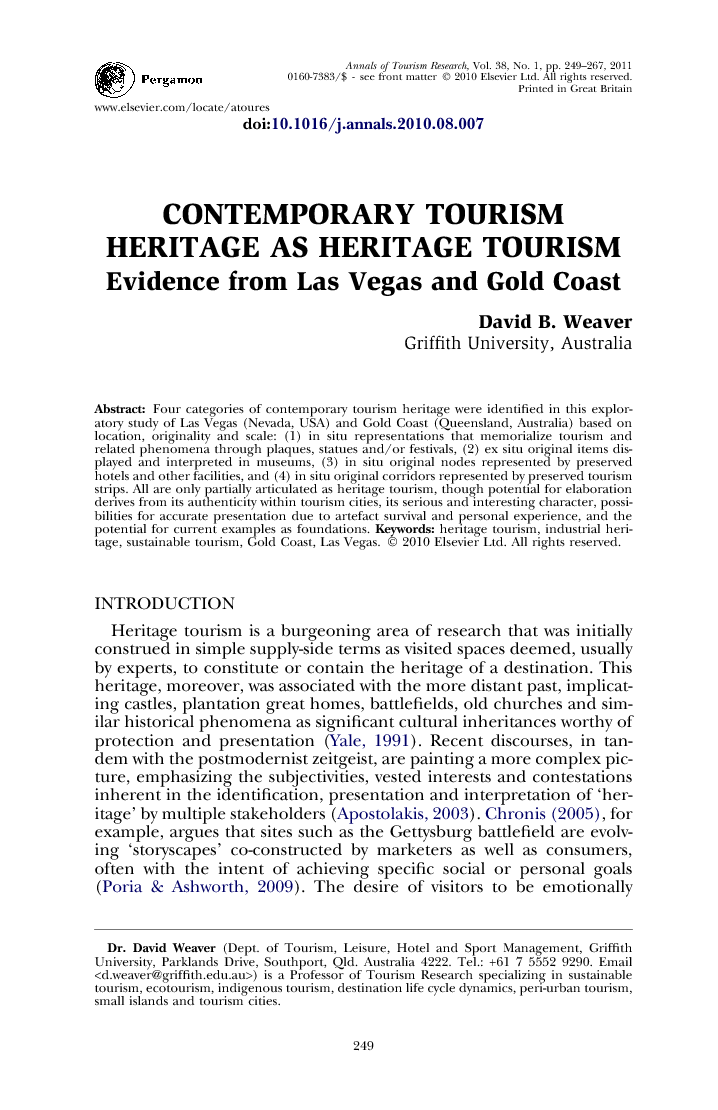 Four categories of contemporary tourism heritage were identified in this exploratory study of Las Vegas (Nevada, USA) and Gold Coast (Queensland, Australia) based on location, originality and scale: (1) in situ representations that memorialize tourism and related phenomena through plaques, statues and/or festivals, (2) ex situ original items displayed and interpreted in museums, (3) in situ original nodes represented by preserved hotels and other facilities, and (4) in situ original corridors represented by preserved tourism strips. All are only partially articulated as heritage tourism, though potential for elaboration derives from its authenticity within tourism cities, its serious and interesting character, possibilities for accurate presentation due to artefact survival and personal experience, and the potential for current examples as foundations.

Heritage tourism is a burgeoning area of research that was initially construed in simple supply-side terms as visited spaces deemed, usually by experts, to constitute or contain the heritage of a destination. This heritage, moreover, was associated with the more distant past, implicating castles, plantation great homes, battlefields, old churches and similar historical phenomena as significant cultural inheritances worthy of protection and presentation (Yale, 1991). Recent discourses, in tandem with the postmodernist zeitgeist, are painting a more complex picture, emphasizing the subjectivities, vested interests and contestations inherent in the identification, presentation and interpretation of ‘heritage’ by multiple stakeholders (Apostolakis, 2003). Chronis (2005), for example, argues that sites such as the Gettysburg battlefield are evolving ‘storyscapes’ co-constructed by marketers as well as consumers, often with the intent of achieving specific social or personal goals (Poria & Ashworth, 2009). The desire of visitors to be emotionally connected with their own personal heritage as part of such co-constructions is being increasingly recognized (Poria et al., 2003 and Poria et al., 2006), stimulating interest in ‘hot interpretation’ that is emotive as well as cognitive, and also potentially personalized (Uzzell & Ballantyne, 2008). In the postmodern imagination, heritage therefore is essentially whatever the visitor perceives as heritage (Poria et al., 2006 and Timothy and Boyd, 2003). One implication is the increased operational expansion and diversification of ‘heritage’ (Fowler, 1989 and Tunbridge and Ashworth, 1996), its eroding temporal boundaries indicated in apparent oxymora such as ‘contemporary archaeology’, ‘future heritage’ (Fairclough, 2008), and ‘heritage of the recent past’ (Walton, 2009). These eroding boundaries of time and context greatly increase the potential for phenomena related to such ‘non-traditional’ areas as sport (Ramshaw & Gammon, 2005), industrial production (Edwards and Llurdés I Coit, 1996 and Xie, 2006)—and tourism—to be recognized as heritage tourism attractions. Already achieving limited recognition in the literature are tourism sites old enough to situate within conventional parameters of heritage. Certain seaside resorts, according to Walton (2009) have established their own industrial archaeology worthy of preservation and presentation. Historic seaside resorts and theme parks are both recognized by Prentice (1994) as legitimate heritage attractions, while Timothy and Boyd (2003), without elaboration, situate ‘historic theme parks’ at the built urban extreme of a heritage tourism continuum. Indeed, local heritage inventories would be expected to include such sites in their site coverage. Concerted academic investigation of these phenomena from a heritage tourism perspective, however, is confined to American boardwalks (Lilliefors, 2006) and the English seaside resort of Blackpool (Walton & Wood, 2009), though other resorts, historic piers, spas, casinos and hotels also qualify for such investigation. The second and more contestable dimension that more literally adheres to the notion of the heritage of the recent past is the investigation of post-World War Two phenomena, distinguished as they are by their association with popular contemporary culture as well as broadly possessed living memory and personal histories. Relevant literature is similarly lacking, with touristic studies of historic Route 66 in the USA by Repp (1999) and Caton and Santos (2007) being perhaps the only examples. No investigations to date have systematically considered either manifestation of tourism heritage (i.e., pre- or post-World War Two) from the perspective of specialized tourism cities that have experienced most of their growth in tourism and resident population since the mid-20th century. Using Las Vegas (USA) and the Gold Coast of Australia as comparative case studies, this paper considers the extent to which the local tourism heritage is recognized and protected, and subsequently developed and marketed as heritage tourism. The case for and against both levels of engagement is also presented, toward the broader consideration and recognition of tourism heritage as a legitimate form of heritage tourism.

This exploratory paper acknowledges the legitimacy of contemporary tourism as heritage—represented in the coining of the term ‘tourism heritage’—and demonstrates the realities of and possibilities for its articulation as heritage tourism. As such, it may also be the first academic paper to explicitly and systematically examine contemporary tourism as, somewhat paradoxically, a tourist attraction. Empirical evidence from Las Vegas and Gold Coast facilitate subsequent analysis and development by identifying four types of tourism heritage differentiated by scale, location and originality, all of which are only partially articulated at present. The most basic category of in situ representation, as heritage tourism, is best illustrated in volume terms by the GC’s nostalgia/retro Wintersun festival, although direct manifestations of and links to the relevant tourism heritage are lacking. The clearest illustration of ex situ original items is LV’s Liberace Museum, which similarly focuses on a specific tourism event-related theme rather than its attendant historical tourism context. The ‘Welcome to Fabulous Las Vegas’ sign is the best and by far most frequently visited example of in situ tourism facilities, while the Strip itself best exemplifies in situ tourism corridors or districts, though neither have achieved the level of collective product articulation found in conventional heritage contexts, such as the French Quarter of New Orleans which preserves the original French settlement area of the city and serves as the focus for annual Mardi Gras festivities. Factors that militate against strategies to articulate contemporary tourism as commercially viable heritage tourism include perceptions that it is not marketable, attractive or interesting, and too recent to be construed as ‘heritage’. Also pertinent are its rapid destruction and replacement by even newer structures as well as its diversion of resources from ‘legitimate’ heritage interests. Countervailing factors that support the case for articulation in the context of tourism cities include its authentic character (which incorporates the reality of ephemerality) and existing mass tourist markets that include individuals attracted by their own past personal experience with these phenomena. Many aspects of the latter are neither trivial nor uninteresting, and their articulation may provide educational benefits and a sense of pride for the local community. Their recent character, moreover, reduces distortion of presentation and interpretation, while extant examples such as those described here indicate market receptiveness and provide a convenient foundation for a concerted product development strategy. However compelling these pro-articulation factors, the present study is constrained by its exploratory nature and by the concomitant lack of systematic empirical input from stakeholder groups such as residents, tourists, entrepreneurs and planners. To the extent that such information is provided, it is anecdotal or speculative, and serves to frame the attendant typology and indicate its degree of articulation. Whether therefore a substantial portion of residents in the two tourism cities will embrace the local tourism heritage as part of their personal heritage, and concurrently support and participate in its development as a tourism product, remain for now open questions requiring follow-up investigation. Equally important is to understand which contemporary tourism heritage products are attractive to which actual and potential tourist segments and how they can best be presented and interpreted to maximize this attraction effect. Special attention perhaps is required to identify the extent to which in situ representations such as plaques and statues incidentally or systematically attract visitors. The results of such proposed research directives, more than theoretical pro-articulation arguments, may compel tourism leaders in Las Vegas and Gold Coast to embark on a concerted strategy to develop their contemporary tourism heritage and then realize its potential as heritage tourism (something that currently does not exist in either city, perhaps in part because of the diffuse and diverse character of product stakeholders). However, in the meanwhile it is worth considering again the successful experience of two other types of once improbable heritage attraction. First, sporting activity, with leisure, temporal and participatory parameters similar to tourism, is well developed as heritage tourism in many destinations, as evidenced by halls of fame, Olympic sites, iconic stadiums or arenas, and historic golf courses such as St. Andrew’s. These demonstrate that the accommodation of modernity within a framework of tradition is feasible. Second, the demonization of simulacra and other features of the modern tourism city echoes the contempt once directed toward the bleak factory-scapes of the Industrial Revolution. Those same landscapes are now the object of reverential gazing in cities such as Lowell and Leeds where industrial heritage is proudly projected. Advocates of contemporary tourism heritage, therefore, have opportunities to learn from and be encouraged by both sectors.