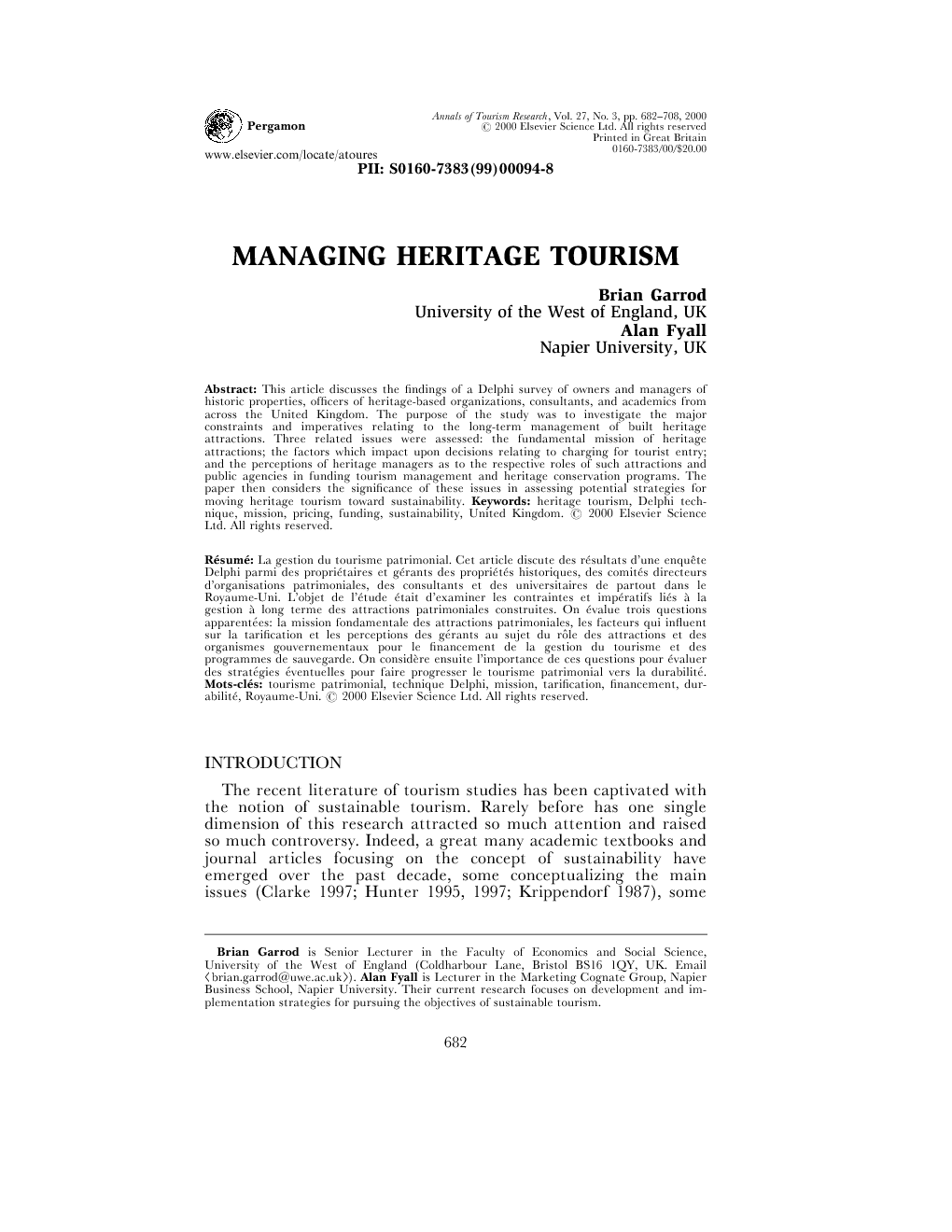 This article discusses the findings of a Delphi survey of owners and managers of historic properties, officers of heritage-based organizations, consultants, and academics from across the United Kingdom. The purpose of the study was to investigate the major constraints and imperatives relating to the long-term management of built heritage attractions. Three related issues were assessed: the fundamental mission of heritage attractions; the factors which impact upon decisions relating to charging for tourist entry; and the perceptions of heritage managers as to the respective roles of such attractions and public agencies in funding tourism management and heritage conservation programs. The paper then considers the significance of these issues in assessing potential strategies for moving heritage tourism toward sustainability.

The recent literature of tourism studies has been captivated with the notion of sustainable tourism. Rarely before has one single dimension of this research attracted so much attention and raised so much controversy. Indeed, a great many academic textbooks and journal articles focusing on the concept of sustainability have emerged over the past decade, some conceptualizing the main issues (Clarke, 1997, Hunter, 1995, Hunter, 1997 and Krippendorf, 1987), some generally endorsing the concept (Cater and Goodall, 1992, Eber, 1992 and Hunter and Green, 1995; Inskeep 1991; Middleton and Hawkins 1998), and others censuring it (Hughes, 1995, McKercher, 1993 and Wheeller, 1994). There has also been a large number of collected works published on the theme of sustainable tourism (Bramwell et al., 1996, Bramwell and Lane, 1994, Briguglio et al., 1996, Cater and Lowman, 1994, Hall and Lew, 1998, Priestley et al., 1996 and Stabler, 1997). Given this context, it is perhaps surprising that the heritage tourism sector has received relatively little attention from scholars interested in the concept of sustainable tourism. With a few notable exceptions (Anfield, 1994, Cope, 1995, Croft, 1994, Johnson and Thomas, 1995 and van der Borg et al., 1996), the academic literature has preferred to concentrate on the cultural, educational, and practical conservation aspects of heritage tourism. Yet the heritage sector represents a highly significant component of tourism in many developed economies. In the United Kingdom, for example, the heritage sector has been described as “a major strength of the British market for overseas visitors” (Markwell, Bennett and Ravenscroft 1997:95) and is estimated to generate around 28% of all UK tourism expenditure annually (Carr 1994). The heritage sector has also been vaunted as a major potential growth area for tourism in the UK (Prentice 1993a). In view of the economic significance of heritage as a tourism “product”, it is curious indeed that so little interest has been shown in assessing the conditions that must be met in order to secure its sustainability. It is surprising that so little academic attention has been paid to exploring the relationship between heritage tourism and sustainability because the two concepts evidently share a common theme. Sustainable development has been defined as a process which ensures that “we pass onto the next generation a stock of [natural and built] capital assets no less than the stock we have now” (Pearce 1992:4). Heritage tourism, meanwhile, has been viewed simply as “tourism centred on what we have inherited, which can mean anything from historic buildings, to art works, to beautiful scenery” (Yale 1991:21). The pivotal concept in both of these definitions is clearly that of “inheritance”, yet the connection between heritage tourism and sustainability still remains largely unexplored. The purpose of this article is to investigate some of the possible reasons for this disparity. In particular, it is hypothesized that the notion of sustainable tourism is an “essentially contested concept” (Hall 1998), meaning that its definition and use is inherently a matter of dispute. As such, the term sustainable tourism has come to mean a great number of different things, according to the differing backgrounds and perceptions of those who are defining and employing it. This much is widely acknowledged in the literature (Garrod and Fyall, 1998, Hunter, 1997 and McKercher, 1993). However, the particular contribution of this article is to apply this analysis to the context of built heritage tourism. In short, it sets out to determine whether the relative slowness of the heritage tourism sector to catch on to the sustainability imperative can be explained by the distinctive institutional conventions and ideological imperatives of heritage managers. In so doing, the article considers the significance of three core issues: the fundamental mission of heritage attractions; the factors which impact upon decisions relating to charging entry fees; and the perceptions of managers as to the respective roles of heritage attractions and public agencies in funding such management and conservation programs.

Perhaps the most striking feature of this study was the emergence of a fairly close association between the fundamental elements of the heritage mission and the widely acknowledged principles of sustainable development. This judgement is supported by Cope, 1995 and Phillips, 1995, both of whom interpret the founding philosophies of the National Trust as being essentially synonymous with the principles of sustainable development. Nevertheless, it is evident from the Delphi ranking exercise that a number of important interpretational disparities remain in practice. These relate particularly to the balance that is to be achieved between conservation and contemporary use, the part that is to be played by education in the heritage mission, and the nature of the relationship among the heritage attraction, tourists, and the local community. Further exploration of these issues suggests that the proposed correlation between the heritage mission and the objectives of sustainable development may in fact be somewhat misleading. The results of the Delphi survey suggest that the heritage establishment tends to place more emphasis on conservation and education, and less on contemporary use and local community, than is evident in most other interpretations of the sustainability imperative. Whether this approach is capable of achieving genuinely sustainable development is open to debate. Proponents of more ecocentric versions of sustainability might argue that this is entirely in keeping with the sustainability imperative; if heritage properties are not conserved, then they will ultimately become lost and unable to be part of the heritage of future generations. Others adopting a more technocentric perspective, however, might wish to argue that futurity should not be achieved at the expense of equity in the pursuit of sustainable development. If the present generation is denied access to the heritage property, then it will just as surely cease to be a relevant part of their heritage. The survey also highlighted a number of important contextual issues relating to the subject of pricing strategy among heritage attractions. While previous studies have examined pricing practices among attractions in a quantitative manner (Leask and Goulding, 1996 and Rogers, 1995), none have attempted to interpret their results in the light of a qualitative understanding of the prevailing constraints and imperatives of tourism management. What is particularly revealing about the findings of the Delphi study is that while the panelists generally anticipated more difficult financial times ahead for the heritage sector, elevated admission prices were not generally thought to be a suitable strategic response. This might be considered surprising given the enthusiasm for applying the so-called “user pays principle” that is often expressed in the context of other economic activities, including various tourism sectors. Nevertheless, heritage managers tend to argue that elevated admission pricing usually runs counter to the fundamental mission of heritage attractions, which explicitly includes providing public access to the property or site concerned. Two alternative approaches to elevated admission prices were proposed in the course of the Delphi study: the use of physical restraints and attempting to increase visitors’ secondary spending. It is not clear why the former is considered acceptable while strategic admission pricing is not, as both would appear to restrict access. The strategy of trying to increase secondary spending, meanwhile, carries with it a number of inherent dangers. One, the pursuit of secondary spending usually requires investment in additional on-site facilities, such as gift shops, restaurants, and other ancillary services. This kind of development is widely acknowledged to detract from the authenticity of the heritage experience and can divert investment away from vital repair, maintenance, and conservation work. Two, the strategy of attempting to increase secondary spending is often only viable when visitor numbers are stable or increasing. If the heritage property is approaching its carrying capacity, or has already exceeded it, then this strategy is likely to prove counter-productive in the long run. The study also proved of significant value in exploring experts’ perceptions of what should be the conservation funding priorities of major heritage organizations. Perhaps it was to be expected that managers would consider factors such as rarity and uniqueness to head the list of funding priorities. This approach places the responsibility for selecting what is to be conserved and what is to be inherited firmly in the hands of experts and resonates strongly with the traditional curatorial approach to heritage management. Whether this is entirely consistent with sustainable development thinking is, however, open to debate. This article suggests that unless a wider range of stakeholders is involved in the decision-making process, heritage runs the risk of losing its relevance and meaning. It is hard to see how an attraction could be considered part of a “sustainable” heritage sector if this were allowed to happen. Finally, the study generated a number of new insights into the relationship between conservation funding priorities and pricing practices. The establishment largely accepts that individual heritage properties will need some degree of external funding in order to pay for the repair, maintenance, and conservation work all such properties inevitably require. Nevertheless, it was not generally considered acceptable to prioritize properties that are most threatened by excessive visitation numbers, nor was it considered necessary to prioritize properties that would otherwise be forced to adopt pricing policies aimed at increasing secondary spending. What becomes clear is that the establishment is firmly wedded to what has been called the “curatorial” view of heritage management. This article suggests, however, that this approach is not entirely synonymous with the more generally accepted notion of sustainable development. If one thing is clear, it is that sustainable heritage management will not be achieved by maintaining the status quo. New management philosophies and practices will have to be adopted.