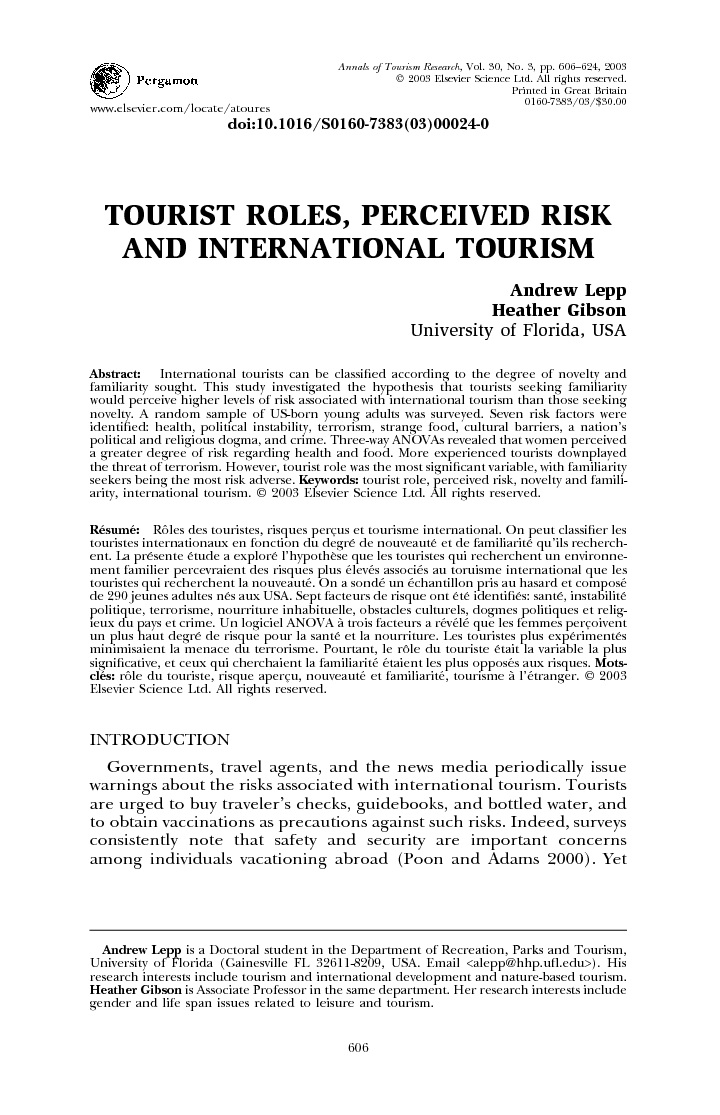 International tourists can be classified according to the degree of novelty and familiarity sought. This study investigated the hypothesis that tourists seeking familiarity would perceive higher levels of risk associated with international tourism than those seeking novelty. A random sample of US-born young adults was surveyed. Seven risk factors were identified: health, political instability, terrorism, strange food, cultural barriers, a nation’s political and religious dogma, and crime. Three-way ANOVAs revealed that women perceived a greater degree of risk regarding health and food. More experienced tourists downplayed the threat of terrorism. However, tourist role was the most significant variable, with familiarity seekers being the most risk adverse.

Governments, travel agents, and the news media periodically issue warnings about the risks associated with international tourism. Tourists are urged to buy traveler’s checks, guidebooks, and bottled water, and to obtain vaccinations as precautions against such risks. Indeed, surveys consistently note that safety and security are important concerns among individuals vacationing abroad (Poon and Adams 2000). Yet despite the pervasiveness of these beliefs and practices in everyday culture, there has been little academic research exploring the perceived risk associated with international tourism. The issue of perceived risk raises such important questions as how different types of tourists perceive international tourism in terms of risk and safety, and what factors influence this perception. Previous investigations have identified four major risk factors: terrorism (Sönmez, Apostolopoulos and Tarlow 1999, Aziz 1995, Bar-On 1996, Leslie 1999, Richter and Waugh 1986, Enders, Sandler and Parise 1992, Sönmez and Graefe 1998a, Sönmez and Graefe 1998b and Sönmez 1998); war and political instability (Gartner and Shen 1992, Hollier 1991, Ioannides and Apostolopoulos 1999, Mansfeld 1996, Mansfeld 1999, Richter 1992, Richter 1999, Seddighi, Nuttall and Theocharous 2001, Teye 1986 and Wall 1996); health concerns (Carter 1998, Cossens and Gin 1994 and Lawton and Page 1997); and crime (Brunt, Mawby and Hambly 2000, Dimanche and Leptic 1999, Ellis 1995, Garcia and Nicholls 1995, Hall, Selwood and McKewon 1995, Moore and Berno 1995, Pizam, Tarlow and Bloom 1997 and Pizam 1999). The relationship between tourism and terrorism gained international notoriety in 1972 during the Munich Olympic Games. The Palestinian attack on Israeli athletes left eleven people dead and introduced a global television audience of nearly 800 million viewers to terrorism (Sönmez and Graefe 1998a). Since then, international tourists have been acutely aware of this relationship. One of the most infamous acts of terrorism against tourists occurred in Egypt in 1997 when gunmen killed 71 tourists outside of Luxor. Indeed, tourists are often the specific targets of terrorist organizations. In Egypt, Aziz (1995) explained tourism has come to represent capitalism and conspicuous consumption and an attack on tourists signifies ideological opposition to these western values. In other areas of the world, where tourism is a state sponsored industry, an attack on tourists can symbolize an attack on the government (Richter and Waugh 1986 and Sönmez 1998). Most recently, the terrorist attacks of September 11, 2001 in the United States resulted in 6.8% fewer international tourists visiting North America in the same year compared to the previous year (World Tourism Organization 2002). Like terrorism, political instability and war can increase the perception of risk at a destination. As a result of the conflict in Tiananmen Square in China, approximately 11,500 tourists canceled visits to Beijing in 1989 (Gartner and Shen 1992). The Persian Gulf War in 1990 caused such a massive redirection of tourists away from the Middle East that hotels in Israel were used to house Russian immigrants instead of tourists (Hollier 1991). War and political instability can also affect neighboring countries not directly involved in any conflict. For example, the burgeoning tourism industry in Zambia was completely crippled after the US State Department issued a travel advisory for Zimbabwe, Zambia’s neighbor (Teye 1986). This phenomenon has been identified as the generalization effect (Enders, Sandler and Parise 1992), whose reach may sometimes appear astounding. During the Persian Gulf War, for instance, destinations as far removed as Kenya and Tanzania were negatively impacted (Honey 1999). The generalization effect also applies to health related risk. Carter (1998) found in a study of healthcare as a perceived risk factor that entire continents could be generalized as perilous or safe. In particular, he found that Europe and North America are widely regarded as safe from infectious pathogens, although recent events may have challenged this image. During the spring of 2001, confusion over the health related effects of “mad cow disease” and the outbreak of foot and mouth disease in the United Kingdom deterred thousands of potential tourists from the United States (CNN Europe 2001). However, in general, Europe is regarded as relatively safe in terms of health-related dangers, whereas tourists commonly view Africa as a breeding ground for infection, particularly HIV. A related study by Cossens and Gin (1994) echoed these results. They found that health risks stemming from poor food and water quality are perceived to be greater in Africa and Asia than in Europe and Australasia. A common perception among tourists is that they are “easy targets” for criminals. Some reasons for this may be that tourists typically carry large sums of money; engage in “risky” behaviors (frequent nightclubs, consume alcohol, move through strange places, etc.); are ignorant of local languages, signs, and customs; and lack local support groups (Pizam, Tarlow and Bloom 1997). However, contrary to these findings, Brunt, Mawby and Hambly (2000) found that crime was not a major concern for British tourists abroad. In order to avoid becoming victims of crime, many tourists make an effort to “blend in” with the locals. Such behavior may include keeping a low profile, dressing more casually, eliminating conspicuous consumption, and not identifying themselves with other foreigners. Realistically, blending in is difficult for tourists, whose behavior and the places they visit easily separate them from locals (Sönmez 1998). Furthermore, language differences create barriers that are perceived as troublesome (Basala and Klenosky 2001). Based on this background, it seems reasonable to suggest that tourists feel safer in familiar environments, whereas novel envsironments may present greater risk. This study investigated the relationship between tourists’ preference for novelty or familiarity and their perception of risk associated with international tourism.

Since this sample was composed of US-born university students, the generalizability of these findings is limited to similar populations. Following the literature, the sample was delimited by lifestage, socioeconomic status, and nationality. As such, this study contributes to a better understanding of the perceptions of risk associated with international tourism for young, largely middle class Americans. One avenue for future research would be to repeat this study with people at different stages in the lifestage and from different nationalities. Within these delimitations, understanding how individuals perceive risk related to international tourism has a number of implications. Results indicate the existence of identifiable risk factors associated with it. From a practical standpoint, identifying these factors might contribute to a better understanding of destination image in terms of risk and safety. Conceivably, the image that individuals hold of the risks at a destination may influence the likelihood of visiting it. As such, these findings have important implications for understanding touristic behavior and destination marketing. It seems logical that marketers can improve the image of a destination by decreasing the perception that specific risk factors are present. Image based on safety may become increasingly important as the number of economies tied to tourism increases. The perception of risk associated with a destination can have dire economic consequences. This was evident in the United Kingdom where the foot and mouth epidemic cost $140 million in lost tourism revenues per week during spring 2001 (CNN Europe 2001). For researchers, destination studies could incorporate these factors, as perceived risk might influence a successful image. Realistically, controlling risk perception may be difficult when competing against mass media bent on sensationalizing such occurrences. The British Tourism Authority spent $6 million on advertising to try to revive their $21 billion tourism industry after “mad cow” and “Britain” were paired throughout international headlines (CNN Europe 2001). The results of this study suggest that marketers of destinations affected by real or imagined risk factors need to target tourists with a higher tolerance for risk (Cohen’s explorers and drifters). It appears that differences among tourists in terms of novelty seeking translate into differences in the level of risk they perceive to accompany international tourism. These findings reveal that novelty seekers may tolerate higher levels of risk. From an academic standpoint, this substantiates the idea that personality might be important in understanding tourist role preference (Cohen 1972, Frew and Shaw 1999, Hoxter and Lester 1987, Hoxter and Lester 1988, Madrigal 1995 and Plog 1974) and differences in the perception of risk associated with tourism (Carr 2001, Roehl and Fesenmaier 1992 and Sönmez and Graefe 1998a). Future research might use psychometric measures to investigate the possible influence of psychological traits on role preference. Personality measures have been used sparsely in tourism research. The identification of optimal level of stimulation as underlying touristic preference points to the need to better understand the psychological influences on tourist behavior (Wahlers and Etzel 1985). Over the last ten years, the growing understanding of differences among tourists has led to many specialized markets; but as yet, there has been little recognition that tourists differ in terms of what they perceive to be risky. In summary, tourism planners need to be aware of which risks might cause stress among tourists, an awareness that should also inform marketing strategies. This is of particular importance in the developing world where tourism is being promoted as an important market sector (Burns 1999). In such cases, the accepted tourism development strategy encourages large investments and high class resorts (Burns 1999 and Hampton 1998). These opulent resorts cater to the organized and independent mass tourists. Unfortunately, these are the most risk averse type and may be the most likely to abandon vacation plans in the face of perceived risk. This may be considered with the findings of Carter 1998 and Cossens and Gin 1994 who have shown that large areas of the developing world are generalized as risky. The results of this study suggest that the sustainability of such development strategies should be questioned. Tourism marketers need to learn how to guard against the “generalization effect” as perceived risk can have severe economic consequences. In light of recent events (such as the terrorism attacks