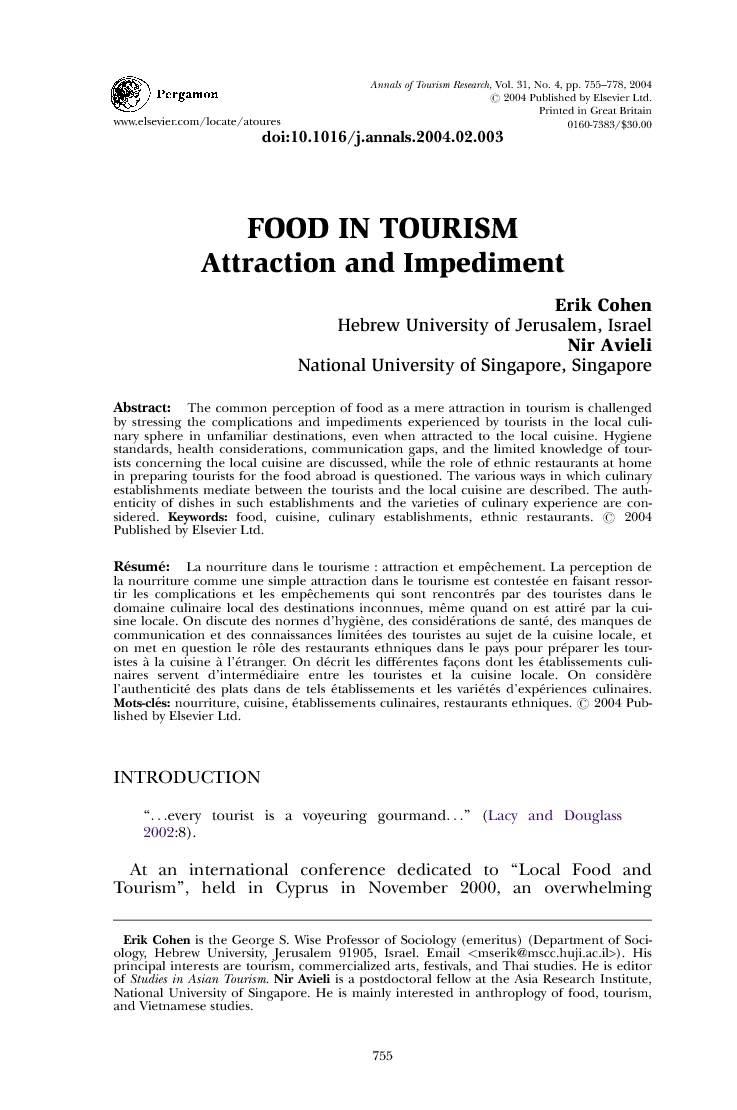 The common perception of food as a mere attraction in tourism is challenged by stressing the complications and impediments experienced by tourists in the local culinary sphere in unfamiliar destinations, even when attracted to the local cuisine. Hygiene standards, health considerations, communication gaps, and the limited knowledge of tourists concerning the local cuisine are discussed, while the role of ethnic restaurants at home in preparing tourists for the food abroad is questioned. The various ways in which culinary establishments mediate between the tourists and the local cuisine are described. The authenticity of dishes in such establishments and the varieties of culinary experience are considered.

Despite its considerable importance, the role and meaning of food in tourism has been surprisingly little discussed in the sociological literature. The principal aim of this article was to propose an approach to the topic by integrating some such culinary notions in culinary sociology with conceptions of the sociology of tourism. This article has departed from the general tension between the attraction and repulsion of novelty in food, to analyze the dilemmas faced by tourists in unfamiliar culinary situations at their destinations. The principal line of the presentation was to deal first with the variety of constraints experienced in such situations, and then turn to the different ways by which culinary establishments facilitate the overcoming of those constraints. The article has shown how they provide a “culinary environmental bubble” to tourists. However, through this process aspects of the local cuisine are, to different degrees, filtered and transformed, thus making local dishes accessible to tourists. In the process a tourist cuisine frequently emerges, which, like tourist arts, is not just an impoverished variant of local food, but often features innovative dishes, creatively composed of elements from different origins. The analysis related primarily to Western tourists’ encounters with Third World cuisines, with which they may be only superficially acquainted at home and to which they are generally positively disposed. This article did not deal extensively with Western tourism to other Western countries, with whose cuisines tourists might be considerably more familiar. It is surmised that in such cases the various constraints dealt with in this article will be less salient when making the local food more directly accessible to tourists. This way, they will be less dependent on the intermediation of a “culinary environmental bubble”. Consequently, such cuisines will undergo fewer adaptations or transformations under the impact of tourism than those with which the tourists are less familiar. The existing literature on the topic (Hjalager and Richards 2002), by focusing on Western tourism to well-developed Western destinations, overemphasizes food as an attraction, while remaining mostly oblivious to its role as an impediment in less developed areas. This article has purposely abstained from a systematic consideration of the culinary aspects of Asian tourism in Western countries. This is a topic in need of separate analysis, since it cannot be dealt with as a simple obverse of the preceding presentation. The cuisines of Asian countries have not been penetrated by outside influences to the same extent as the Western ones. Consequently, Asians abroad tend to be less disposed than Westerners to partake of the food of others, and are more dependent than the latter on establishments providing their own national cuisines. In the case of major national groups of Asian tourists, such as the Japanese, this predilection for their own food means that they will be reluctant to visit a given destination in significant numbers, unless it features restaurants serving their national cuisine. The paper here has done no more than outline a systematic approach to the study of the place of food in tourism. Only comparative empirical research, focusing on the issues touched upon, will show the usefulness of the approach and indicate ways for its further elaboration.■A