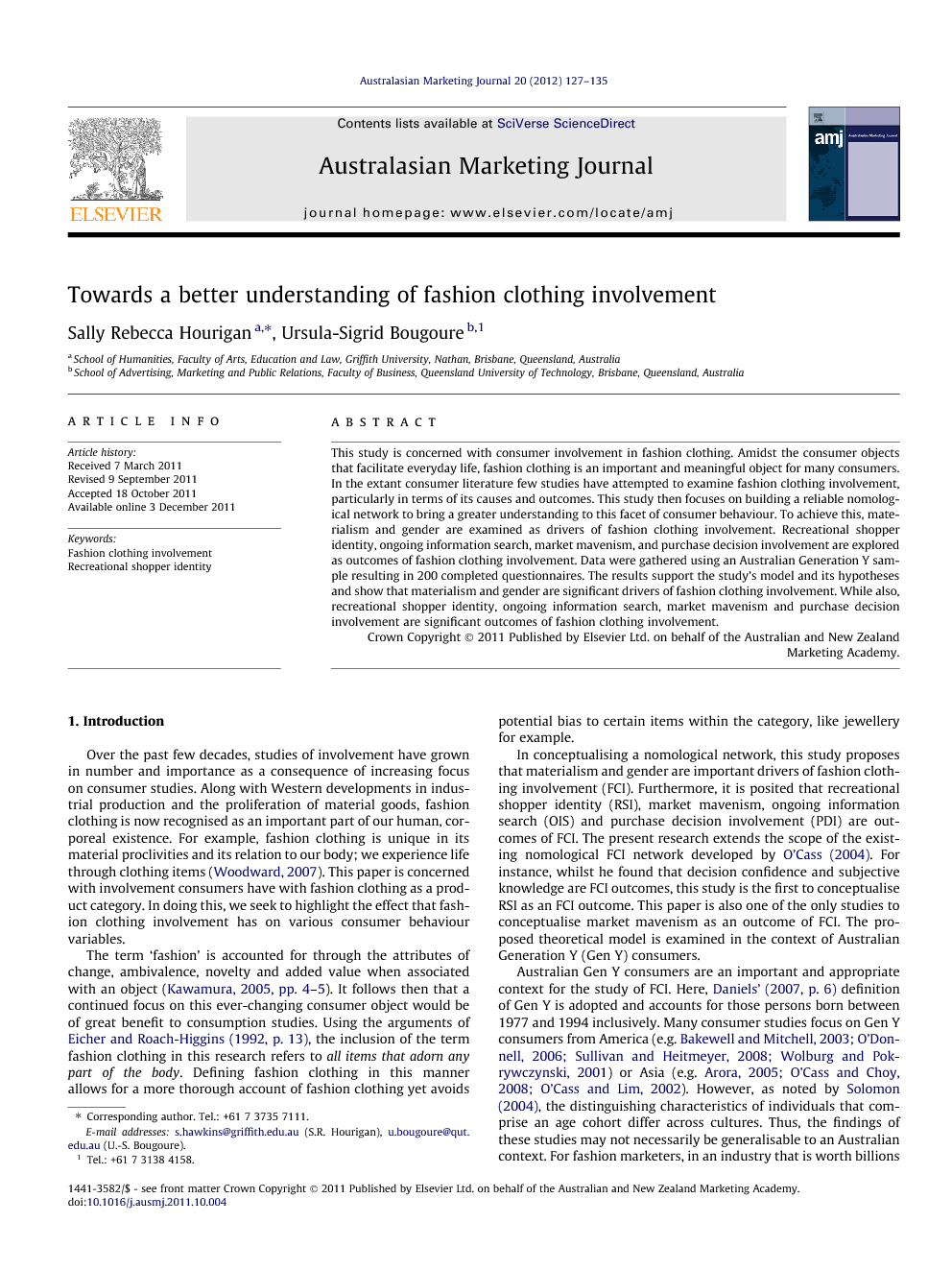 Over the past few decades, studies of involvement have grown in number and importance as a consequence of increasing focus on consumer studies. Along with Western developments in industrial production and the proliferation of material goods, fashion clothing is now recognised as an important part of our human, corporeal existence. For example, fashion clothing is unique in its material proclivities and its relation to our body; we experience life through clothing items (Woodward, 2007). This paper is concerned with involvement consumers have with fashion clothing as a product category. In doing this, we seek to highlight the effect that fashion clothing involvement has on various consumer behaviour variables. The term ‘fashion’ is accounted for through the attributes of change, ambivalence, novelty and added value when associated with an object (Kawamura, 2005, pp. 4–5). It follows then that a continued focus on this ever-changing consumer object would be of great benefit to consumption studies. Using the arguments of Eicher and Roach-Higgins (1992, p. 13), the inclusion of the term fashion clothing in this research refers to all items that adorn any part of the body. Defining fashion clothing in this manner allows for a more thorough account of fashion clothing yet avoids potential bias to certain items within the category, like jewellery for example. In conceptualising a nomological network, this study proposes that materialism and gender are important drivers of fashion clothing involvement (FCI). Furthermore, it is posited that recreational shopper identity (RSI), market mavenism, ongoing information search (OIS) and purchase decision involvement (PDI) are outcomes of FCI. The present research extends the scope of the existing nomological FCI network developed by O’Cass (2004). For instance, whilst he found that decision confidence and subjective knowledge are FCI outcomes, this study is the first to conceptualise RSI as an FCI outcome. This paper is also one of the only studies to conceptualise market mavenism as an outcome of FCI. The proposed theoretical model is examined in the context of Australian Generation Y (Gen Y) consumers. Australian Gen Y consumers are an important and appropriate context for the study of FCI. Here, Daniels’ (2007, p. 6) definition of Gen Y is adopted and accounts for those persons born between 1977 and 1994 inclusively. Many consumer studies focus on Gen Y consumers from America (e.g. Bakewell and Mitchell, 2003, O’Donnell, 2006, Sullivan and Heitmeyer, 2008 and Wolburg and Pokrywczynski, 2001) or Asia (e.g. Arora, 2005, O’Cass and Choy, 2008 and O’Cass and Lim, 2002). However, as noted by Solomon (2004), the distinguishing characteristics of individuals that comprise an age cohort differ across cultures. Thus, the findings of these studies may not necessarily be generalisable to an Australian context. For fashion marketers, in an industry that is worth billions worldwide (Australian Bureau of Statistics, 2009), understanding young consumers is important as they are predicted to become the most significant retail spending group in Australia by the year 2015 (Daniels, 2007 and Huntley, 2006). This paper begins with a review of the extant FCI literature and develops the proposed conceptual model, ‘Fashion Clothing Involvement Drivers and Outcomes’ with six hypotheses. This is followed by an outline of the research design used in the study including data collection methods. The paper then presents the analysis and results of the study and concludes with a discussion of the study’s findings, its limitations and recommended areas for future research.

The present study developed an extended nomological network for FCI in the context of Australian Gen Y consumers. Overall, a number of interesting theoretical and practical implications arise from our findings. In terms of FCI drivers, this study found that materialistic values are a significant determinant of high FCI, and that women are more likely to display high FCI than men. The most interesting theoretical findings of this study however, relate to the outcomes of FCI and how these aspects of consumption thread together. In particular, a main effect of FCI in this study shows that RSI is a strong outcome variable. This provides empirical support for prior conceptualisations of the link between the person-object relationship and recreational shopping (Evrard and Aurier, 1996 and Guiry et al., 2006). One explanation for this relationship may lie in how distinctly different the shopping activities are of consumers are who are highly involved in fashion clothing, from those who are not involved. OIS was also consistent with high FCI where the more fashion clothing occupies a significant part of a consumer’s life, the more time and effort will be spent with information sources to inform this area of interest. Given the visual and tactile nature of clothing, immersion with sources that provide relevant aesthetic cues may go some distance in explaining the popularity of fashion blogs and online stores as a relevant source of consumer information. This study’s results also show that both market maven characteristics and ongoing information search are significant outcomes of FCI. This means that highly involved fashion clothing consumers are not just interested in gathering marketplace information for themselves, but also engage in the sharing this information with others. While our finding contributes to the literature on market mavenism, this finding is perhaps of greatest interest and value to marketing practitioners. The challenge now is to develop and implement tools to foster these behaviours in highly involved consumers. According to the ELM, making information relevant to consumers is the best way to get them to use the central route to persuasion. Market mavens may certainly represent an avenue to increase relevance for non involved fashion clothing consumers. As suggested by Browne and Kalenberg (1997), high involvement purchase decisions are thought to proceed through extended decision-making processes. Our findings support this claim and suggest that highly involved fashion consumers find making purchase decisions within fashion an involving process. A key question in attempting to better understand this aspect of consumer behaviour is to quantify the time and money such consumers invest within this market sector. In addition to theoretical contributions made by this study, our findings also contribute to the collective understanding of Australian Gen Y consumers. Previous studies have ignored Australian Gen Y consumers, focusing instead on American (Bakewell and Mitchell, 2003, O’Donnell, 2006, Sullivan and Heitmeyer, 2008 and Wolburg and Pokrywczynski, 2001) and Asian Gen Y consumers (Arora, 2005, O’Cass and Choy, 2008 and O’Cass and Lim, 2002). Gen Y has significant market potential in Australia and is predicted to be the most significant retail spending group by the year 2015 (Daniels, 2007). This is an important consideration when accounting for the current global economic climate and taking into account the aging Australian population. For marketing practitioners, the results of this study also have interesting implications. This study is the first to empirically show RSI as an important consumer identity construct that is affected by consumer involvement. As consumers who identify themselves as recreational shoppers spend more time and money shopping, and shop across multiple shopping channels (e.g. brick-and-mortar, on-line stores, etc.) (Guiry et al., 2006), it is important to understand what influences RSI. Also, our finding that highly materialistic consumers are more likely to be involved in fashion clothing implies that tactics should be employed that nurture such values and that focus on notions of clothing being a part of the consumer self image and personal identity. For example, when targeting Australian Gen Y consumers, campaigns should focus on aspects of image management and portrayal. Additionally, our study confirms that females have a greater orientation to involvement with fashion clothing. This finding is reflected today in Australian malls with many stores targeting females. For fashion marketers, it will continue to be a highly competitive area of business that requires careful planning to reach target consumers. Also, that FCI affects OIS, mavenism and PDI in fashion clothing shows the importance of understanding consumer involvement in retailing particularly when considering the increasing popularity of online stores based in Australia and abroad. By developing strategies and employing campaigns aimed to increase involvement in fashion clothing, companies may experience a significant flow-on effect in nurturing other positive market place behaviours, like market mavenism. Whilst interesting findings have emerged from this study, they are bound by a number of limitations. In particular, the study used a non probability sample which means caution should be heeded when projecting the results of the study to the greater Australian Gen Y population. Also, this study used the broader term of fashion clothing, rather than using any particular fashion clothing brand names. On this issue, O’Cass (2004, 879) states “it is important to examine the relationship [of involvement] at the product class level before exploring if and how consumers transfer involvement from the product to specific brands with a product class”. Overall, these limitations open new avenues for future research which could examine the study’s conceptual model on a probability based sample and could also use real fashion brands to elicit responses. The study’s conceptual model should be re-examined to determine external validity in future research. Finally, the role of RSI in consumer decision making in Australia and abroad, should be further examined, to determine if this new consumer research construct is globally significant to both marketing theory and practice.