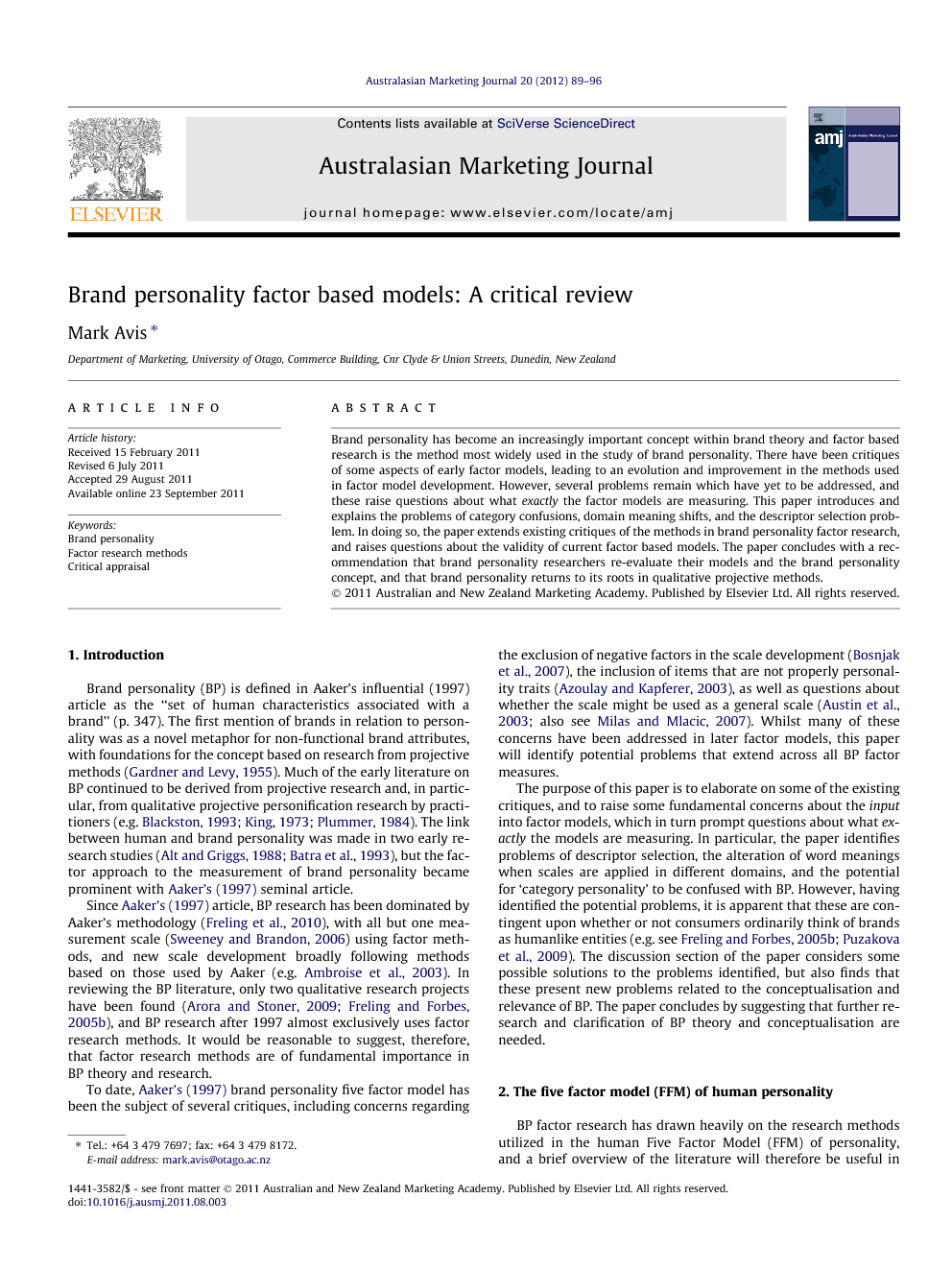 Brand personality (BP) is defined in Aaker’s influential (1997) article as the “set of human characteristics associated with a brand” (p. 347). The first mention of brands in relation to personality was as a novel metaphor for non-functional brand attributes, with foundations for the concept based on research from projective methods (Gardner and Levy, 1955). Much of the early literature on BP continued to be derived from projective research and, in particular, from qualitative projective personification research by practitioners (e.g. Blackston, 1993, King, 1973 and Plummer, 1984). The link between human and brand personality was made in two early research studies (Alt and Griggs, 1988 and Batra et al., 1993), but the factor approach to the measurement of brand personality became prominent with Aaker’s (1997) seminal article. Since Aaker’s (1997) article, BP research has been dominated by Aaker’s methodology (Freling et al., 2010), with all but one measurement scale (Sweeney and Brandon, 2006) using factor methods, and new scale development broadly following methods based on those used by Aaker (e.g. Ambroise et al., 2003). In reviewing the BP literature, only two qualitative research projects have been found (Arora and Stoner, 2009 and Freling and Forbes, 2005b), and BP research after 1997 almost exclusively uses factor research methods. It would be reasonable to suggest, therefore, that factor research methods are of fundamental importance in BP theory and research. To date, Aaker’s (1997) brand personality five factor model has been the subject of several critiques, including concerns regarding the exclusion of negative factors in the scale development (Bosnjak et al., 2007), the inclusion of items that are not properly personality traits (Azoulay and Kapferer, 2003), as well as questions about whether the scale might be used as a general scale (Austin et al., 2003; also see Milas and Mlacic, 2007). Whilst many of these concerns have been addressed in later factor models, this paper will identify potential problems that extend across all BP factor measures. The purpose of this paper is to elaborate on some of the existing critiques, and to raise some fundamental concerns about the input into factor models, which in turn prompt questions about what exactly the models are measuring. In particular, the paper identifies problems of descriptor selection, the alteration of word meanings when scales are applied in different domains, and the potential for ‘category personality’ to be confused with BP. However, having identified the potential problems, it is apparent that these are contingent upon whether or not consumers ordinarily think of brands as humanlike entities (e.g. see Freling and Forbes, 2005b and Puzakova et al., 2009). The discussion section of the paper considers some possible solutions to the problems identified, but also finds that these present new problems related to the conceptualisation and relevance of BP. The paper concludes by suggesting that further research and clarification of BP theory and conceptualisation are needed.

The argument of this paper is that there are several significant problems with the factor models used to measure BP: the category confusion problem, the domain adjustment problem, and the descriptor selection problem. When examining each of these problems, it seems that the root cause can be found in the supporting theory for BP and its conceptualisation. In particular, humanlike brand theory appears to be a key support for BP theory, but the validity of this theory is questionable. Although recommendations are given to ameliorate some of the problems identified in the paper, these solutions themselves raise questions regarding the theory and conceptualisation of BP. In identifying the problems, and the related problems in the theory and conceptualisation of BP, the paper presents some questions that could lead to clarification of the BP concept, including some new directions/avenues of research and theory development. Research and theory development commences with questions, and it is hoped that BP researchers and theorists will find the questions posed in this paper to be a useful stimulus for further development of the understanding of the concept of brand personality.