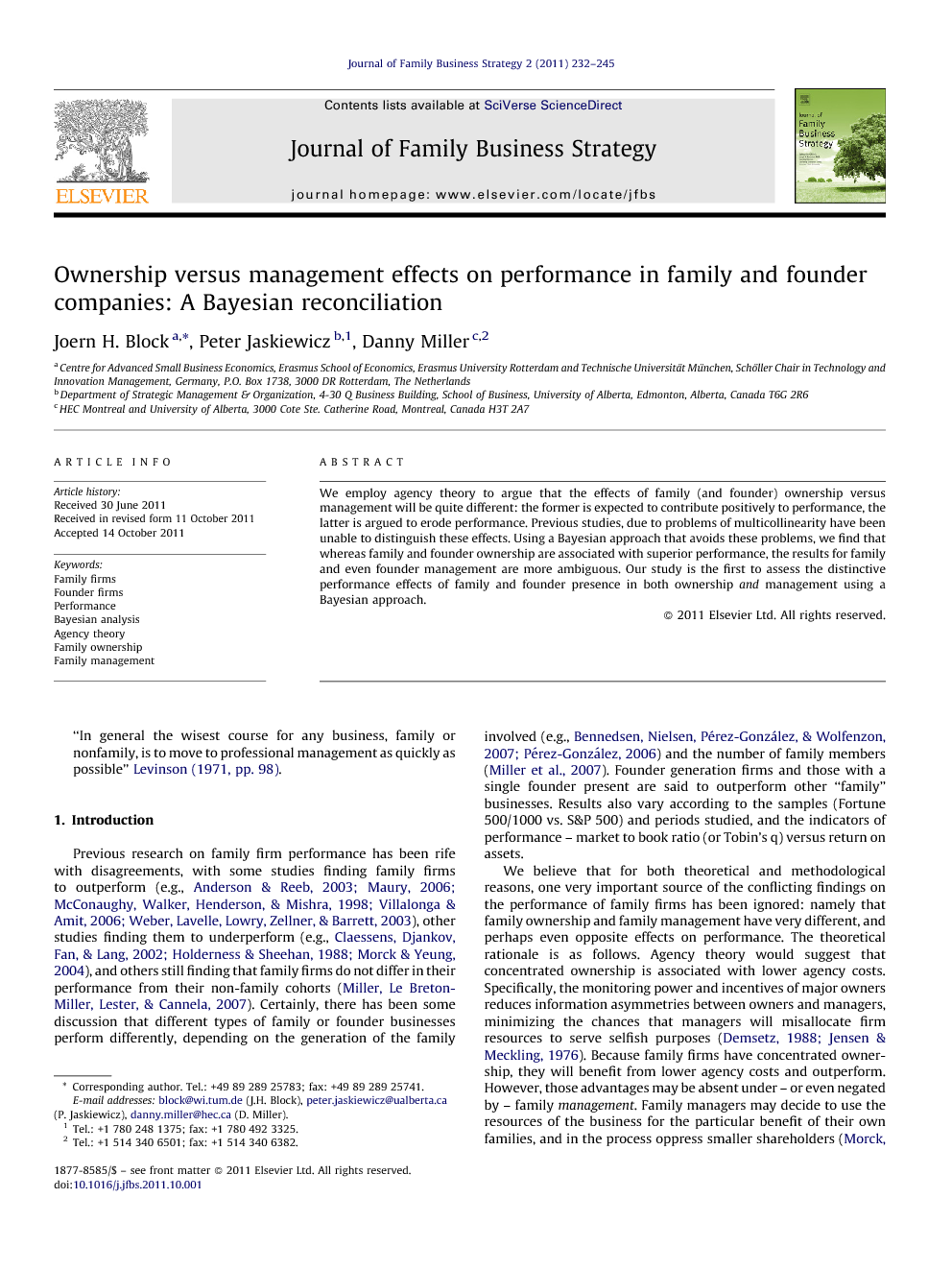 We employ agency theory to argue that the effects of family (and founder) ownership versus management will be quite different: the former is expected to contribute positively to performance, the latter is argued to erode performance. Previous studies, due to problems of multicollinearity have been unable to distinguish these effects. Using a Bayesian approach that avoids these problems, we find that whereas family and founder ownership are associated with superior performance, the results for family and even founder management are more ambiguous. Our study is the first to assess the distinctive performance effects of family and founder presence in both ownership and management using a Bayesian approach.

Previous research on family firm performance has been rife with disagreements, with some studies finding family firms to outperform (e.g., Anderson and Reeb, 2003, Maury, 2006, McConaughy et al., 1998, Villalonga and Amit, 2006 and Weber et al., 2003), other studies finding them to underperform (e.g., Claessens et al., 2002, Holderness and Sheehan, 1988 and Morck and Yeung, 2004), and others still finding that family firms do not differ in their performance from their non-family cohorts (Miller, Le Breton-Miller, Lester, & Cannela, 2007). Certainly, there has been some discussion that different types of family or founder businesses perform differently, depending on the generation of the family involved (e.g., Bennedsen et al., 2007 and Pérez-González, 2006) and the number of family members (Miller et al., 2007). Founder generation firms and those with a single founder present are said to outperform other “family” businesses. Results also vary according to the samples (Fortune 500/1000 vs. S&P 500) and periods studied, and the indicators of performance – market to book ratio (or Tobin's q) versus return on assets. We believe that for both theoretical and methodological reasons, one very important source of the conflicting findings on the performance of family firms has been ignored: namely that family ownership and family management have very different, and perhaps even opposite effects on performance. The theoretical rationale is as follows. Agency theory would suggest that concentrated ownership is associated with lower agency costs. Specifically, the monitoring power and incentives of major owners reduces information asymmetries between owners and managers, minimizing the chances that managers will misallocate firm resources to serve selfish purposes (Demsetz, 1988 and Jensen and Meckling, 1976). Because family firms have concentrated ownership, they will benefit from lower agency costs and outperform. However, those advantages may be absent under – or even negated by – family management. Family managers may decide to use the resources of the business for the particular benefit of their own families, and in the process oppress smaller shareholders ( Morck et al., 2005 and Shleifer and Vishny, 1997). They may also be less competent than outsiders as they are relatively immune to dismissal for incompetence and come from a smaller selection pool ( Burkart et al., 2003, Claessens et al., 2002, Morck and Yeung, 2003 and Volpin, 2002). In short, there are good conceptual reasons for believing that family ownership and family management may exert opposing influences on performance. The same might be said for founder ownership and management, which may be why founders are often released after their firms go public ( Boeker and Karichalil, 2002 and Shleifer and Vishny, 1997). Our argument is not only of conceptual significance to the development of theory for family and founder firms but it also has practical governance implications regarding ownership and management of family and founder firms ( Chrisman, Chua, & Litz, 2004). Our second concern is methodological. Although prior studies have taken into account both ownership and management, they have been required to do so in separate predictive models given the high correlations among family ownership and management (usually between 0.5 and 0.7). Typically, the results for ownership and management have converged, we suspect because of that high correlation (Anderson and Reeb, 2003, Miller et al., 2007 and Villalonga and Amit, 2006). Unfortunately, there may well be a confounding effect at work here: any perceived advantage to family (or founder) management might actually be due to family (or founder) ownership. As we have argued above, there may not be any advantage to family management. In short, whereas family and founder ownership reduce agency costs, family and founder management may negate those advantages. Thus these two dimensions may have very different effects on performance, a vital consideration in establishing appropriate governance mechanisms, and one that is often neglected in research on entrepreneurship ( Chandler and Lyon, 2001 and Connelly et al., 2010). As noted, because of the high correlation between family/founder ownership and family/founder management, previous research, using conventional methods of regression, has confounded these influences. The present study will avoid that problem by using Bayesian regression analyses which are able to encompass ownership and management in the same models, without incurring problems of multicollinearity. Bayesian methods also have an advantage in that their results are not point estimates but entire distribution functions of the effects of interest. Bayesian analysis allows statements of likely and unlikely effects. Thus, we are able to specify the probability of family and founder management and family and founder ownership having positive effects rather than merely reporting a regression coefficient which is either significant or not. That way, Bayesian analysis avoids the danger of non-significant, but potentially important, results not being reported ( Cohen, 1994, Schmidt, 1996 and Starbuck, 2006). This study of S&P 500 companies between 1994 and 2003 shows that over 90% of the time, a higher level of family or founder ownership increases the firm's financial performance. By contrast, family managed companies are outperformed by their non family managed companies in over 50% of the cases, although founder CEOs do somewhat better than that. In short, family influences are Janus-faced: ownership effects are positive, management effects ambiguous, or even negative. Subsequent studies would be well advised to take those differences into account. We must stress that classical random- and fixed-effects models obscured these differences and only the Bayesian analyses were sufficiently fine-grained to make these distinctions. We shall first elaborate agency arguments for the performance advantages of family and founder ownership, and then argue for the performance disadvantages of family and founder management. Then we shall present our sample and methods, describing the particular appropriateness of Bayesian regressions in eliminating the multicollinearity problem that has affected all prior studies in this domain. We conclude by presenting and discussing our results and their implications.