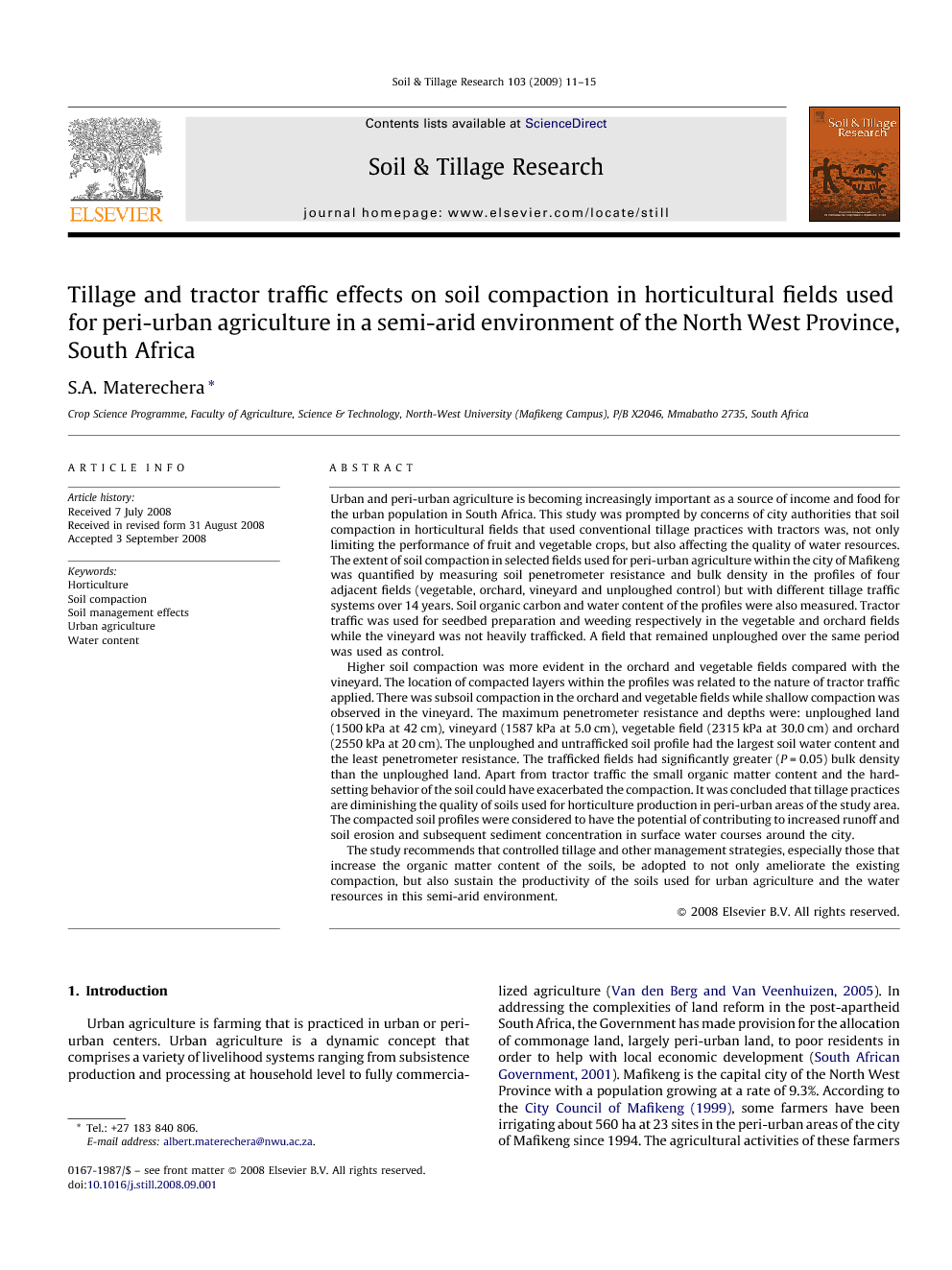 Urban and peri-urban agriculture is becoming increasingly important as a source of income and food for the urban population in South Africa. This study was prompted by concerns of city authorities that soil compaction in horticultural fields that used conventional tillage practices with tractors was, not only limiting the performance of fruit and vegetable crops, but also affecting the quality of water resources. The extent of soil compaction in selected fields used for peri-urban agriculture within the city of Mafikeng was quantified by measuring soil penetrometer resistance and bulk density in the profiles of four adjacent fields (vegetable, orchard, vineyard and unploughed control) but with different tillage traffic systems over 14 years. Soil organic carbon and water content of the profiles were also measured. Tractor traffic was used for seedbed preparation and weeding respectively in the vegetable and orchard fields while the vineyard was not heavily trafficked. A field that remained unploughed over the same period was used as control. Higher soil compaction was more evident in the orchard and vegetable fields compared with the vineyard. The location of compacted layers within the profiles was related to the nature of tractor traffic applied. There was subsoil compaction in the orchard and vegetable fields while shallow compaction was observed in the vineyard. The maximum penetrometer resistance and depths were: unploughed land (1500 kPa at 42 cm), vineyard (1587 kPa at 5.0 cm), vegetable field (2315 kPa at 30.0 cm) and orchard (2550 kPa at 20 cm). The unploughed and untrafficked soil profile had the largest soil water content and the least penetrometer resistance. The trafficked fields had significantly greater (P = 0.05) bulk density than the unploughed land. Apart from tractor traffic the small organic matter content and the hard-setting behavior of the soil could have exacerbated the compaction. It was concluded that tillage practices are diminishing the quality of soils used for horticulture production in peri-urban areas of the study area. The compacted soil profiles were considered to have the potential of contributing to increased runoff and soil erosion and subsequent sediment concentration in surface water courses around the city. The study recommends that controlled tillage and other management strategies, especially those that increase the organic matter content of the soils, be adopted to not only ameliorate the existing compaction, but also sustain the productivity of the soils used for urban agriculture and the water resources in this semi-arid environment.

Urban agriculture is farming that is practiced in urban or peri-urban centers. Urban agriculture is a dynamic concept that comprises a variety of livelihood systems ranging from subsistence production and processing at household level to fully commercialized agriculture (Van den Berg and Van Veenhuizen, 2005). In addressing the complexities of land reform in the post-apartheid South Africa, the Government has made provision for the allocation of commonage land, largely peri-urban land, to poor residents in order to help with local economic development (South African Government, 2001). Mafikeng is the capital city of the North West Province with a population growing at a rate of 9.3%. According to the City Council of Mafikeng (1999), some farmers have been irrigating about 560 ha at 23 sites in the peri-urban areas of the city of Mafikeng since 1994. The agricultural activities of these farmers principally involve vegetable and fruit cultivation, although the sight of roaming cattle, sheep and goats is also familiar to the residents of the city. The fields vary in size from 0.15 to 1.5 hectares. Urban agriculture can have both negative and positive effects on the health and environmental conditions of the urban population (Lock and Van Veenhuizen, 2001). Although the major concern among urban agriculture practitioners has been the public health risks and safety of food produced linked to the use of wastewater and pesticide soil contamination, city authorities in Mafikeng have also raised concerns about the possible contribution of urban and peri-urban agriculture to increased sedimentation in the natural water courses whose catchments lie within the limits of the city. Soil compaction is defined as a process of rearranging soil particles to decrease pore space and increase bulk density (Raghavan et al., 1992). The compaction of a soil is also associated with reduction in hydraulic conductivity, permeability and diffusivity of water and air through the soil pore system (Soane et al., 1981). Compaction usually reduces the volume of large pores in the soil and may restrict root growth because of the increased mechanical resistance or poor aeration (Barnes et al., 1971, Taylor and Brar, 1991 and Chan et al., 2006). Soil compaction by machinery traffic in agriculture is a well-recognized problem in many parts of the world including South Africa (Bennie and Krynauw, 1985, Soane and Van Ouwerkerk, 1994 and Smith et al., 1997). Poor structure resulting from soil compaction by tractor traffic in vineyards has been shown to reduce root development and yields of grapes (Louw and Benni, 1991 and Van Huyssteen, 1988). Soil compaction has been described as the most serious environmental problem caused by conventional agriculture because, it not only affect crop productivity, but also the workability and sustainability of the soil (McGarry, 2001). The susceptibility of soil to compaction has been shown to be a function of many factors including soil texture, soil water content, vehicle weight and its speed, ground contact pressure and number of passes, and the interaction of these parameters with cropping frequency and farming practices (Smith et al., 1997 and Hamza and Anderson, 2005). Concern has recently been raised by city authorities of the possibility that urban agriculture could be contributing to pollution of water resources due to erosion from the fields. Furthermore, the practitioners of urban agriculture have voiced their concern over poor performance and declining yields of all fruits and vegetables despite the irrigation and fertilizer applied. Although there could be other possible reasons (old age of fruit trees, disease, poor pruning, fertilization and irrigation) for the poor performance of the horticultural crops in urban agriculture, soil compaction was suspected to be the major contributor to the problem. The tractor operations in both vegetable fields and orchards often occur when the soils are moist and prone to compaction (Hamza and Anderson, 2005). The problem of soil compaction could further be aggravated by the hard-setting nature of Hutton soils which are dominant in the area. However, the extent of soil compaction in any of the fields used for peri-urban agriculture has not been quantified. Four fields located within close proximity of each other and lying within the fringes of Mafikeng city were selected to assess the influence of the different tillage and tractor traffic on soil compaction. The objective of this study was to quantify the degree and depth of soil compaction in fields used for urban and peri-urban agriculture in Mafikeng.

The study has highlighted the vulnerability of the soils used for urban and peri-urban agriculture in the Mafikeng area to tractor traffic compaction and the possible associated consequences, not only on root growth but also on infiltration of water into the soil and runoff. The nature and extent of the tractor traffic influenced the occurrence of the compaction within the soil profile. Since soil compaction reduces the macro-porosity of soils thereby reducing the infiltration capacity of the soil, the findings lend credence to the view that compaction in horticultural fields could contribute to the increased sediments observed in water courses around the city due to increased runoff and soil erosion. Further studies should quantify the amount of sediments contributed to the water courses by runoff from different rainfall events and seasons. Furthermore, improved land management practices need to be adopted to ameliorate the existing compaction generated by tillage practices in the trafficked fields. Controlled traffic, deep ripping and conservation tillage practices are recommended.