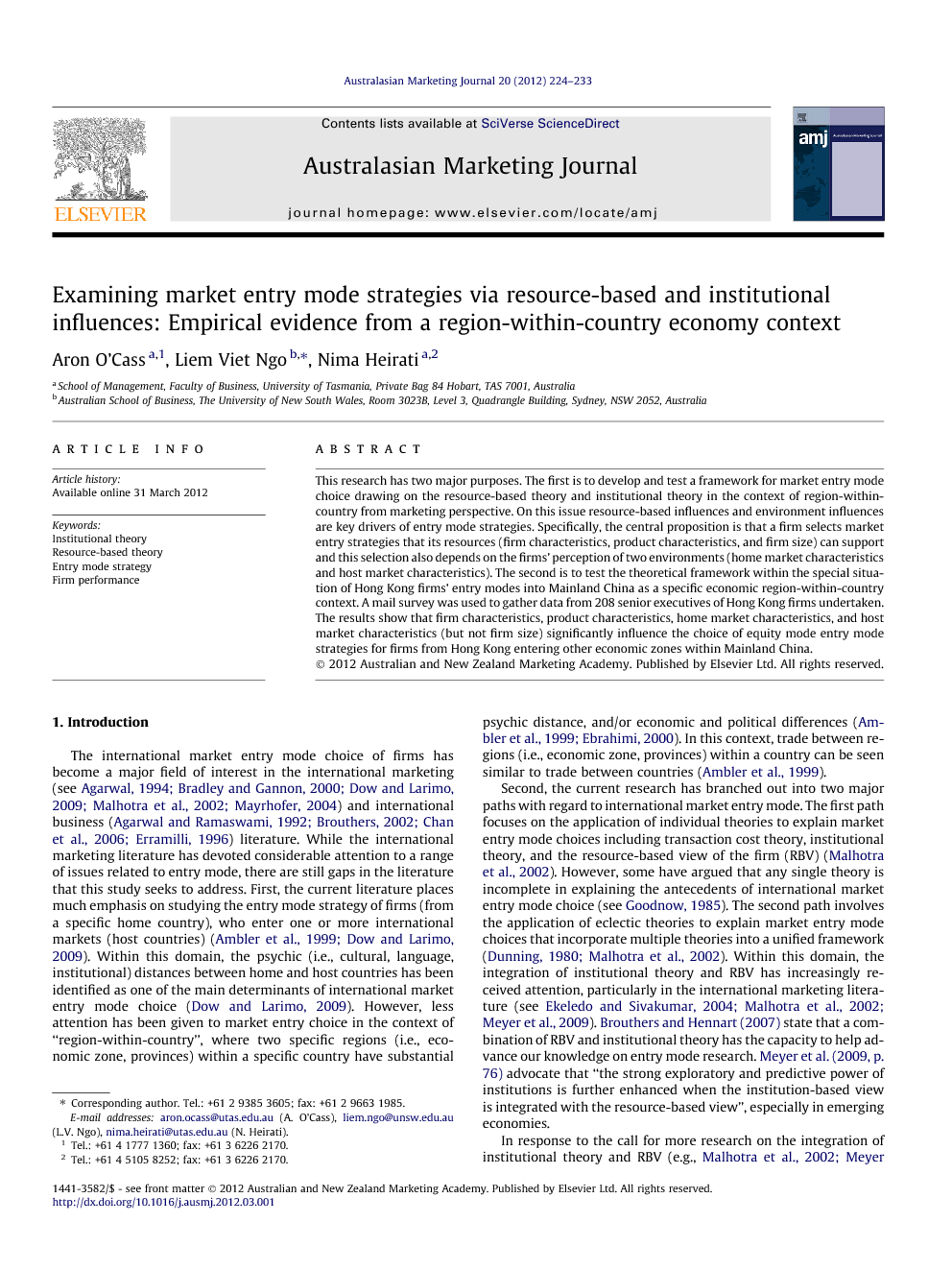 The international market entry mode choice of firms has become a major field of interest in the international marketing (see Agarwal, 1994, Bradley and Gannon, 2000, Dow and Larimo, 2009, Malhotra et al., 2002 and Mayrhofer, 2004) and international business (Agarwal and Ramaswami, 1992, Brouthers, 2002, Chan et al., 2006 and Erramilli, 1996) literature. While the international marketing literature has devoted considerable attention to a range of issues related to entry mode, there are still gaps in the literature that this study seeks to address. First, the current literature places much emphasis on studying the entry mode strategy of firms (from a specific home country), who enter one or more international markets (host countries) (Ambler et al., 1999 and Dow and Larimo, 2009). Within this domain, the psychic (i.e., cultural, language, institutional) distances between home and host countries has been identified as one of the main determinants of international market entry mode choice (Dow and Larimo, 2009). However, less attention has been given to market entry choice in the context of “region-within-country”, where two specific regions (i.e., economic zone, provinces) within a specific country have substantial psychic distance, and/or economic and political differences (Ambler et al., 1999 and Ebrahimi, 2000). In this context, trade between regions (i.e., economic zone, provinces) within a country can be seen similar to trade between countries (Ambler et al., 1999). Second, the current research has branched out into two major paths with regard to international market entry mode. The first path focuses on the application of individual theories to explain market entry mode choices including transaction cost theory, institutional theory, and the resource-based view of the firm (RBV) (Malhotra et al., 2002). However, some have argued that any single theory is incomplete in explaining the antecedents of international market entry mode choice (see Goodnow, 1985). The second path involves the application of eclectic theories to explain market entry mode choices that incorporate multiple theories into a unified framework (Dunning, 1980 and Malhotra et al., 2002). Within this domain, the integration of institutional theory and RBV has increasingly received attention, particularly in the international marketing literature (see Ekeledo and Sivakumar, 2004, Malhotra et al., 2002 and Meyer et al., 2009). Brouthers and Hennart (2007) state that a combination of RBV and institutional theory has the capacity to help advance our knowledge on entry mode research. Meyer et al. (2009, p. 76) advocate that “the strong exploratory and predictive power of institutions is further enhanced when the institution-based view is integrated with the resource-based view”, especially in emerging economies. In response to the call for more research on the integration of institutional theory and RBV (e.g., Malhotra et al., 2002, Meyer et al., 2009, Wright et al., 2005 and Yamakawa et al., 2008), we attempt to improve knowledge about entry mode choice from a marketing perspective in two ways. First, as international market entry modes are a means of linking a firm’s product(s) to international market(s), entry mode choice depends on not only the environmental characteristics of the country, but it also depends on the characteristics of a firm and its products (Kwon and Konopa, 1993). In this sense, this study contends that institutional theory and RBV complement each other. In a practical sense a major task for managers is to achieve congruence between the firm and its environment on strategic decisions such as market entry mode choice (resource–strategy–environment duality). As such, the two theories cannot be isolated in explaining entry mode choices, as a firm competes well in a setting in which there is a fit between its resources and external opportunities (Conner, 1991 and Ekeledo and Sivakumar, 2004). Second, to date little empirical work has been done on examining the relationship between the two theories in explaining entry mode choices of firms, particularly in the contexts of inter-province business where significant psychic differences between regions may exist. Our study aims to investigate the relationships between resource-based influences, environment-based influences and entry mode strategy in a region-within-country context. The focus here is on the China–Hong Kong context. In particular, “from an economic and even sub-cultural perspective, Hong Kong and Mainland China are separate territories significantly foreign to each other” (Child et al., 2002). Further, Hong Kong has been politically reunited with China and this integration of a free-market capitalistic system with a socialist–communist system is seen as the super paradox (Chan et al., 2006). Particularly, the “one country, two systems” ensures that Hong Kong and China remain distinct business environments in terms of legal and regulatory systems, resource availability, infrastructure and market efficiencies (Ebrahimi, 2000). These factors make the China–Hong Kong context a suitable context to represent our view of the region-within-country issue to explore the resource–strategy–environment duality. By focusing on a specific region-within-country context we attempt to address the shortcomings in previous eclectic models that exclude potential impacts of both home and host environmental factors that are difficult to control as firms in these studies may enter different countries (Ekeledo and Sivakumar, 2004). We place our emphasis on a single home market and a single host market common to all firms, allowing the effect of institutional theory and RBV on entry mode to be controlled and studied more clearly.

While this study has several distinctive strengths, limitations resulting from trade-off decisions required in all empirical research are present. First, this study is limited, to a certain extent by using cross-sectional data, which leads to issues of casual inference. Future research using longitudinal data may help in evaluating the prescribed order of the investment in developing of the relationships among firm characteristics, external environment characteristics, market entry choice, and firm performance. Second, a possible concern with our study is the focus mainly on small- and medium-sized firms (SME) with larger numbers of firms in these two categories. These SMEs are the prime engine for economic growth in Hong Kong and SMEs account for 95% of the companies in Hong Kong and employ about two-thirds of the workforce. They operate usually without good financial backup, limited managerial resources, and informal centralized planning and control systems indicating international strategy and structure of SMEs are different from large MNEs. Therefore, the lack of large firm’s involvement is the potential limitation that may cause a negative impact to these research findings. Future research may take this issue into account when conducting similar research in the region-within-country context. In particular, future research should address an important research question; why it could be reasonably expected that firms from a region-within-country context would differ from others at examining foreign market entry mode decision-making. Specifically, there are four possible design strategies: (1) to compare Hong Kong firms having entered into Mainland China before and after its re-unification process as a single country; (2) to compare Hong Kong firms entering into Mainland China versus a different host/foreign countries such as Japan, Korea or even into other geographic areas; (3) to compare Hong Kong firms to other truly international businesses entering into Mainland China; (4) and to compare firms from different region-within-country economies going abroad. This, in addition, would link foreign entry mode selection to foreign market selection, which is taken for granted in this research, as two highly related decision-making processes in the internationalization process of any firm. Any of these strategies, if properly applied, would make significant contribution to this field of research.