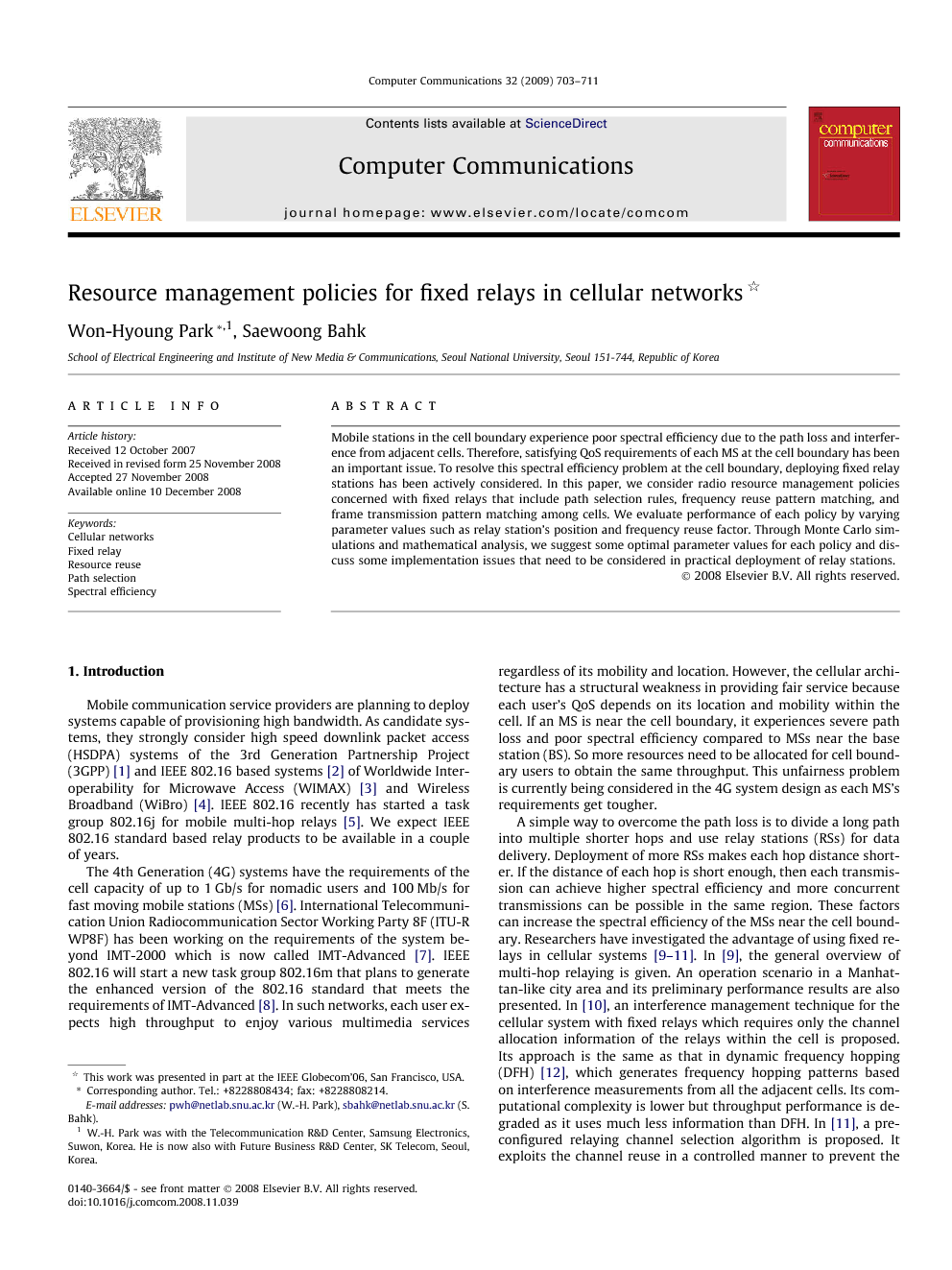 Mobile stations in the cell boundary experience poor spectral efficiency due to the path loss and interference from adjacent cells. Therefore, satisfying QoS requirements of each MS at the cell boundary has been an important issue. To resolve this spectral efficiency problem at the cell boundary, deploying fixed relay stations has been actively considered. In this paper, we consider radio resource management policies concerned with fixed relays that include path selection rules, frequency reuse pattern matching, and frame transmission pattern matching among cells. We evaluate performance of each policy by varying parameter values such as relay station’s position and frequency reuse factor. Through Monte Carlo simulations and mathematical analysis, we suggest some optimal parameter values for each policy and discuss some implementation issues that need to be considered in practical deployment of relay stations.

Mobile communication service providers are planning to deploy systems capable of provisioning high bandwidth. As candidate systems, they strongly consider high speed downlink packet access (HSDPA) systems of the 3rd Generation Partnership Project (3GPP) [1] and IEEE 802.16 based systems [2] of Worldwide Interoperability for Microwave Access (WIMAX) [3] and Wireless Broadband (WiBro) [4]. IEEE 802.16 recently has started a task group 802.16j for mobile multi-hop relays [5]. We expect IEEE 802.16 standard based relay products to be available in a couple of years. The 4th Generation (4G) systems have the requirements of the cell capacity of up to 1 Gb/s for nomadic users and 100 Mb/s for fast moving mobile stations (MSs) [6]. International Telecommunication Union Radiocommunication Sector Working Party 8F (ITU-R WP8F) has been working on the requirements of the system beyond IMT-2000 which is now called IMT-Advanced [7]. IEEE 802.16 will start a new task group 802.16m that plans to generate the enhanced version of the 802.16 standard that meets the requirements of IMT-Advanced [8]. In such networks, each user expects high throughput to enjoy various multimedia services regardless of its mobility and location. However, the cellular architecture has a structural weakness in providing fair service because each user’s QoS depends on its location and mobility within the cell. If an MS is near the cell boundary, it experiences severe path loss and poor spectral efficiency compared to MSs near the base station (BS). So more resources need to be allocated for cell boundary users to obtain the same throughput. This unfairness problem is currently being considered in the 4G system design as each MS’s requirements get tougher. A simple way to overcome the path loss is to divide a long path into multiple shorter hops and use relay stations (RSs) for data delivery. Deployment of more RSs makes each hop distance shorter. If the distance of each hop is short enough, then each transmission can achieve higher spectral efficiency and more concurrent transmissions can be possible in the same region. These factors can increase the spectral efficiency of the MSs near the cell boundary. Researchers have investigated the advantage of using fixed relays in cellular systems [9], [10] and [11]. In [9], the general overview of multi-hop relaying is given. An operation scenario in a Manhattan-like city area and its preliminary performance results are also presented. In [10], an interference management technique for the cellular system with fixed relays which requires only the channel allocation information of the relays within the cell is proposed. Its approach is the same as that in dynamic frequency hopping (DFH) [12], which generates frequency hopping patterns based on interference measurements from all the adjacent cells. Its computational complexity is lower but throughput performance is degraded as it uses much less information than DFH. In [11], a pre-configured relaying channel selection algorithm is proposed. It exploits the channel reuse in a controlled manner to prevent the co-channel interference. However, its channel partitioning pattern is not flexible and requires coordination among base stations. So it is not able to adapt to the variations of traffic loading. Depending on the functionality of the RS, there are two well-known methods in transmitting the relaying signal. One is amplify-and-forward (AF) which requires the RS to have only RF amplifier and the other is decode-and-forward (DF) which requires the RS to decode the signal first, then to re-encode and transmit [13]. There is also a possibility of exploiting the diversity using relays, which introduces the cooperative relaying [14]. The destination node can decode the original signal by combining several signals from multiple relays possibly including the original source. The performance improvement by functioning an MS as relay is shown in [15]. It demonstrates the advantage of this approach well, but there are many issues to be resolved in practical systems that include the design of more intelligent and complicated protocols for MAC, routing, billing, etc. It shows that the throughput gain by using the multi-hop relaying is mainly achieved by two-hop paths. The gain of using the paths of longer than three hops is very little, hence we do not consider the case of using more than three hops in this paper. It also presents that the concurrent relaying can improve the throughput substantially if it is exploited effectively. The concurrent transmissions over paths within four hops and the two two-hop paths is investigated. However, it does not elaborate how the concurrent relaying should be applied in the cellular system in general. We suggest a method for concurrent relaying pattern using an appropriate frequency reuse factor among RSs. In this paper, we mainly compare the performance of two-hop relaying with that of direct communication. We assume that RSs are placed at the line-of-sight from the BS. With the relay’s help, an MS can get a sufficient data rate without experiencing the outage even at the cell boundary where the received signal strength from the BS is too weak. However, there is a drawback of using relays. That is, it consumes more resources compared to using the direct path. Therefore, we design a decision rule for when the relay path should be chosen in preference to the direct path. We consider two types of path selection rules (PSRs) and compare their performances. When an RS transmits, it covers a smaller region than the BS does. So the same frequency band can be spatially reused in some other RS areas within the cell, which necessitates a frequency reuse method. In this paper we consider four reuse patterns among RSs, and radio resource management (RRM) policies such as frequency reuse pattern matching and frame transmission pattern matching among cells. The rest of this paper is organized as follows. Section 2 describes the system model and Section 3 discusses RRM policies. Section 4 presents a Monte Carlo simulation algorithm and simulation results. Section 5 considers some practical issues for the deployment, and we conclude in Section 6.

In this paper, we considered a cellular network with fixed RSs which is designed to provide fair spectral efficiency for MSs near the cell boundary. In the considered relay supported network, a cell boundary user can transmit data packets towards the BS over either the direct path or the relay path. For path selection, we considered various resource management policies that include path selection rules, frequency reuse pattern, and frame transmission pattern among cells. To evaluate each policy, we performed a Monte Carlo simulation with varying system parameters such as frequency reuse factor and the distance between BS and RS. Simulation results gave us an insight for choosing appropriate RRM policies and system parameters. Also we found that the path selection rule in FPSR performs better than that in LPSR. In most cases, an optimal R was 600 m. If the outage ratio of greater than 10% is acceptable, FRF 1 can be a good choice to achieve high throughput. Otherwise FRF 1 and 3 are the best choices in the cases of independent frequency reuse pattern and matched frequency reuse pattern, respectively. There are some issues to be considered when relays are deployed in the cellular system. The signaling overhead for channel quality feedback depends on which device selects the path for communication. Also estimating the FRF value may be difficult and the signaling overhead may be large in real cellular systems due to the irregular and asymmetric relay deployment.