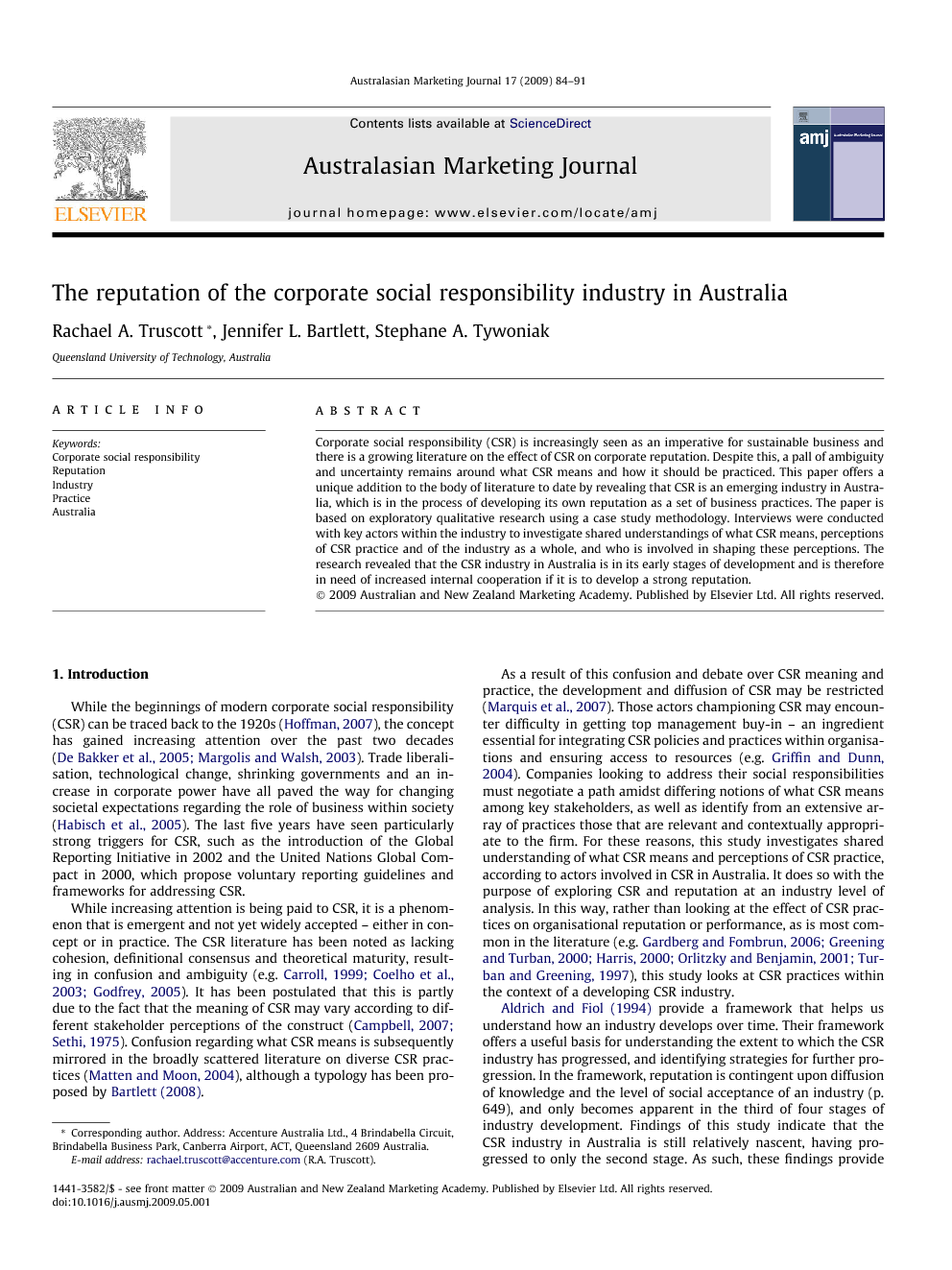 Corporate social responsibility (CSR) is increasingly seen as an imperative for sustainable business and there is a growing literature on the effect of CSR on corporate reputation. Despite this, a pall of ambiguity and uncertainty remains around what CSR means and how it should be practiced. This paper offers a unique addition to the body of literature to date by revealing that CSR is an emerging industry in Australia, which is in the process of developing its own reputation as a set of business practices. The paper is based on exploratory qualitative research using a case study methodology. Interviews were conducted with key actors within the industry to investigate shared understandings of what CSR means, perceptions of CSR practice and of the industry as a whole, and who is involved in shaping these perceptions. The research revealed that the CSR industry in Australia is in its early stages of development and is therefore in need of increased internal cooperation if it is to develop a strong reputation.

While the beginnings of modern corporate social responsibility (CSR) can be traced back to the 1920s (Hoffman, 2007), the concept has gained increasing attention over the past two decades (De Bakker et al., 2005 and Margolis and Walsh, 2003). Trade liberalisation, technological change, shrinking governments and an increase in corporate power have all paved the way for changing societal expectations regarding the role of business within society (Habisch et al., 2005). The last five years have seen particularly strong triggers for CSR, such as the introduction of the Global Reporting Initiative in 2002 and the United Nations Global Compact in 2000, which propose voluntary reporting guidelines and frameworks for addressing CSR. While increasing attention is being paid to CSR, it is a phenomenon that is emergent and not yet widely accepted – either in concept or in practice. The CSR literature has been noted as lacking cohesion, definitional consensus and theoretical maturity, resulting in confusion and ambiguity (e.g. Carroll, 1999, Coelho et al., 2003 and Godfrey, 2005). It has been postulated that this is partly due to the fact that the meaning of CSR may vary according to different stakeholder perceptions of the construct (Campbell, 2007 and Sethi, 1975). Confusion regarding what CSR means is subsequently mirrored in the broadly scattered literature on diverse CSR practices (Matten and Moon, 2004), although a typology has been proposed by Bartlett (2008). As a result of this confusion and debate over CSR meaning and practice, the development and diffusion of CSR may be restricted (Marquis et al., 2007). Those actors championing CSR may encounter difficulty in getting top management buy-in – an ingredient essential for integrating CSR policies and practices within organisations and ensuring access to resources (e.g. Griffin and Dunn, 2004). Companies looking to address their social responsibilities must negotiate a path amidst differing notions of what CSR means among key stakeholders, as well as identify from an extensive array of practices those that are relevant and contextually appropriate to the firm. For these reasons, this study investigates shared understanding of what CSR means and perceptions of CSR practice, according to actors involved in CSR in Australia. It does so with the purpose of exploring CSR and reputation at an industry level of analysis. In this way, rather than looking at the effect of CSR practices on organisational reputation or performance, as is most common in the literature (e.g. Gardberg and Fombrun, 2006, Greening and Turban, 2000, Harris, 2000, Orlitzky and Benjamin, 2001 and Turban and Greening, 1997), this study looks at CSR practices within the context of a developing CSR industry. Aldrich and Fiol (1994) provide a framework that helps us understand how an industry develops over time. Their framework offers a useful basis for understanding the extent to which the CSR industry has progressed, and identifying strategies for further progression. In the framework, reputation is contingent upon diffusion of knowledge and the level of social acceptance of an industry (p. 649), and only becomes apparent in the third of four stages of industry development. Findings of this study indicate that the CSR industry in Australia is still relatively nascent, having progressed to only the second stage. As such, these findings provide insight into the possible trajectory of the CSR industry as it begins to develop its own reputation, based on what CSR is perceived to mean, what constitutes legitimate CSR practice, and who is involved in shaping these perceptions. The central research question of this study is therefore, ‘What implications does nascent industry development have on the reputation of the CSR industry in Australia?’ Findings from this research will not only aid practitioners in convincing senior management of the growing consensus around CSR and how it is practiced in Australia, but will also provide those involved in CSR with important insights into the state of their industry. This information is particularly salient for producers of CSR products and services given industry reputation affects the reputation of the individual organisations that comprise it (Ravasi and Fombrun, 2004).

This study complements extensive practitioner interest with academic research. It contributes to the CSR literature by employing a theoretical approach and level of analysis underutilised to this date. By answering the proposed research question, this paper views the relationship between CSR and reputation in a new light: not only do corporations have reputations to uphold, but so does the CSR industry itself. Ultimately, this study reveals the emergence of a new industry around CSR in Australia. In doing so, it offers a way to understand and value the role of debate and discussion regarding CSR, which up until now has been a point of criticism in the literature. However, due to the early developmental stage of the CSR industry, CSR actors must engage in further intra-industry collaboration, communicate more clearly and persuasively about CSR (for example, through peak bodies and recognised standards) and demonstrate their own integrity and the CSR credentials of their organisations. If actors do not achieve this, further development of the CSR industry may be in danger, particularly the development of industry reputation, which is the key ingredient to the next stage of industry evolution. This study has uncovered broad consensus regarding what CSR means and which associated practices are seen to be most legitimate in Australia, however there is much room for improvement in this area. Key industry actors will need to engineer consensus and champion collective action in order to ensure the continued growth and survival of the industry. Having said this, findings of this research may assist practitioners to ascertain which CSR practices are most contextually appropriate to their firm, resulting in a more effective use of resources and a move toward more firmly establishing the industry. Results may also be used by practitioners to encourage corporate commitment to CSR policies and practices. Future research directions include further research into CSR practices: where they have come from and how they are likely to affect industry reputation. The effect of the CSR industry on those organisations within it may reveal interesting new insights into the reputational impacts of an industry on constituent organisations. The effects of institutional environments on the CSR industry in Australia and the role of institutional entrepreneurs in the future development of the CSR industry also offer avenues for investigation. In particular, a longitudinal study tracking the development of the CSR industry would greatly benefit this field of research.