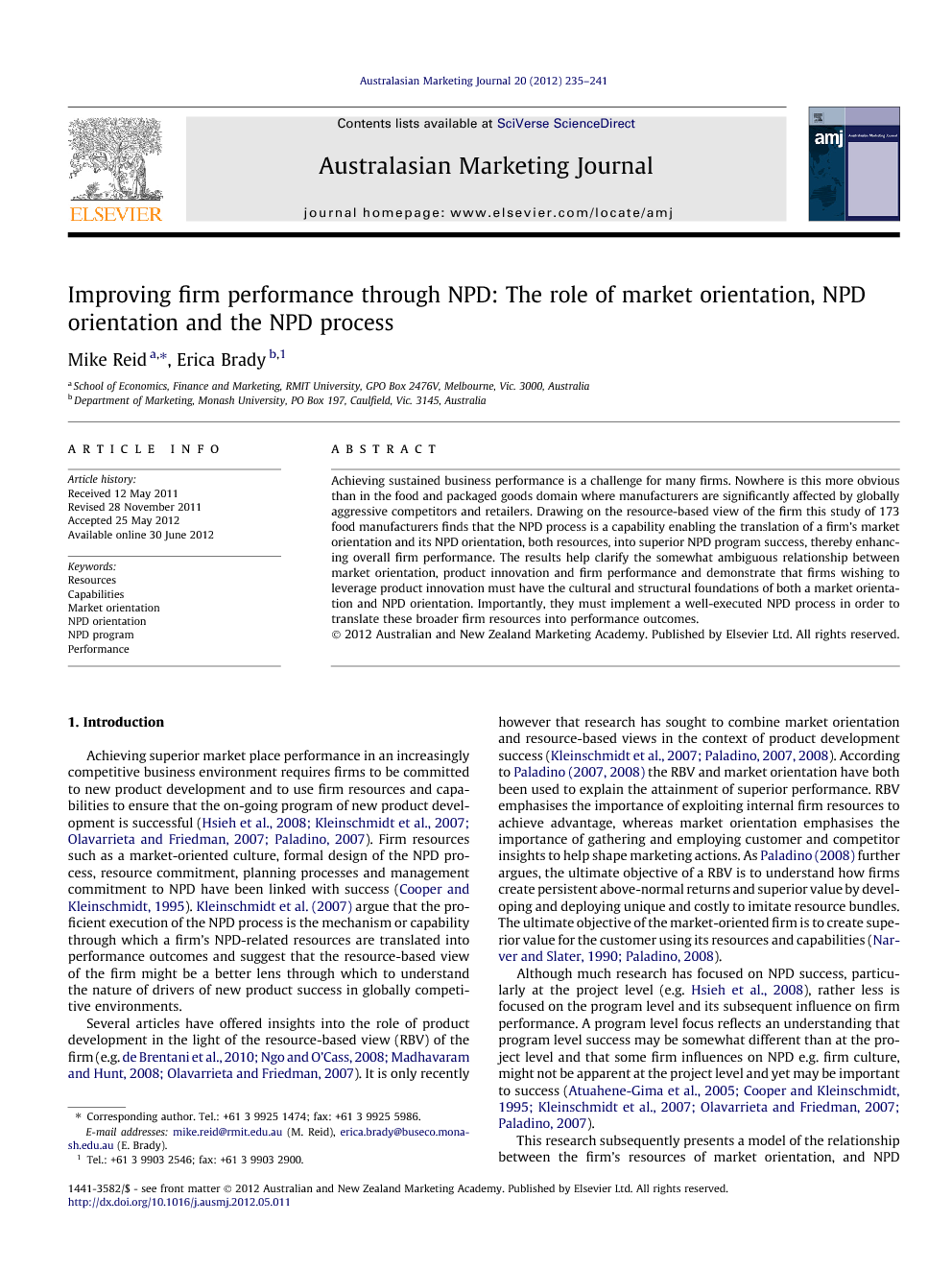 Achieving sustained business performance is a challenge for many firms. Nowhere is this more obvious than in the food and packaged goods domain where manufacturers are significantly affected by globally aggressive competitors and retailers. Drawing on the resource-based view of the firm this study of 173 food manufacturers finds that the NPD process is a capability enabling the translation of a firm’s market orientation and its NPD orientation, both resources, into superior NPD program success, thereby enhancing overall firm performance. The results help clarify the somewhat ambiguous relationship between market orientation, product innovation and firm performance and demonstrate that firms wishing to leverage product innovation must have the cultural and structural foundations of both a market orientation and NPD orientation. Importantly, they must implement a well-executed NPD process in order to translate these broader firm resources into performance outcomes.

Achieving superior market place performance in an increasingly competitive business environment requires firms to be committed to new product development and to use firm resources and capabilities to ensure that the on-going program of new product development is successful (Hsieh et al., 2008, Kleinschmidt et al., 2007, Olavarrieta and Friedman, 2007 and Paladino, 2007). Firm resources such as a market-oriented culture, formal design of the NPD process, resource commitment, planning processes and management commitment to NPD have been linked with success (Cooper and Kleinschmidt, 1995). Kleinschmidt et al. (2007) argue that the proficient execution of the NPD process is the mechanism or capability through which a firm’s NPD-related resources are translated into performance outcomes and suggest that the resource-based view of the firm might be a better lens through which to understand the nature of drivers of new product success in globally competitive environments. Several articles have offered insights into the role of product development in the light of the resource-based view (RBV) of the firm (e.g. de Brentani et al., 2010, Ngo and O’Cass, 2008, Madhavaram and Hunt, 2008 and Olavarrieta and Friedman, 2007). It is only recently however that research has sought to combine market orientation and resource-based views in the context of product development success (Kleinschmidt et al., 2007, Paladino, 2007 and Paladino, 2008). According to Paladino, 2007 and Paladino, 2008 the RBV and market orientation have both been used to explain the attainment of superior performance. RBV emphasises the importance of exploiting internal firm resources to achieve advantage, whereas market orientation emphasises the importance of gathering and employing customer and competitor insights to help shape marketing actions. As Paladino (2008) further argues, the ultimate objective of a RBV is to understand how firms create persistent above-normal returns and superior value by developing and deploying unique and costly to imitate resource bundles. The ultimate objective of the market-oriented firm is to create superior value for the customer using its resources and capabilities (Narver and Slater, 1990 and Paladino, 2008). Although much research has focused on NPD success, particularly at the project level (e.g. Hsieh et al., 2008), rather less is focused on the program level and its subsequent influence on firm performance. A program level focus reflects an understanding that program level success may be somewhat different than at the project level and that some firm influences on NPD e.g. firm culture, might not be apparent at the project level and yet may be important to success (Atuahene-Gima et al., 2005, Cooper and Kleinschmidt, 1995, Kleinschmidt et al., 2007, Olavarrieta and Friedman, 2007 and Paladino, 2007). This research subsequently presents a model of the relationship between the firm’s resources of market orientation, and NPD orientation, and the NPD process capability that promotes both NPD program success and overall firm performance. In doing so the research builds on the work of Langerak et al., 2007 and Kleinschmidt et al., 2007 and Paladino, 2007 and Paladino, 2008 to further understand the impact of organisational resources and their translation into performance outcomes through organisational capabilities. The context for this research is the Australian food manufacturing industry. Food manufacturers are facing significant competitive challenges that may be alleviated, at least partly, through improved performance of their NPD programs. Manufacturers have found themselves sandwiched between two dominant grocery retail chains, a highly consolidated industrial food service industry, and increasing levels of imported foods and food brands. The food retail situation is of particular interest in that two chains account for around 71% of the nation’s AUD$83bn grocery trade (Burgio-Ficca, 2011). The implementation of private label programs by both major chains places even greater pressure on manufacturers to innovate their products and it has been suggested that both chains are targeting 20–30% or more of sales in particular categories.

As with all research there are several limitations that must be addressed. Firstly this study uses a single industry, which whilst beneficial in terms of removing some of the confounding issues of multiple industry studies has implications for generalisability. Secondly this study uses the single key informant approach and self-reporting. Future research should consider forms of triangulation by using multiple informants with the organisation, collecting objective market and firm data on NPD program performance to balance subjective reporting, and consider longitudinal rather than cross-sectional designs. Thirdly, in the context of RBV, the model excludes other resources that may also contribute to the success of the NPD program, including antecedent factors such as a learning orientation, existence of specific know-how building HR and training policies, and specific organisational structures that have been known to reduce NPD cycle times and remove bureaucracy. Other factors such as the inclusion of reputational assets e.g. customer based brand equity may also help explain both NPD program success and firm performance. Finally, accounting for environmental turbulence may provide added insight into the moderate relationship between NPD program success and firm performance. In summary, this study was motivated by the need to improve the understanding of how cultural and innovation-based resources and capabilities are translated into performance outcomes. Using food manufacturing as a context this study highlights the critical role of NPD process capabilities as a core mechanism to attain positive outcomes. The findings suggest that managers wishing to develop a successful new products program need to pay attention to developing an NPD orientation and a market-oriented culture, and support this with the development of specific NPD process activities.