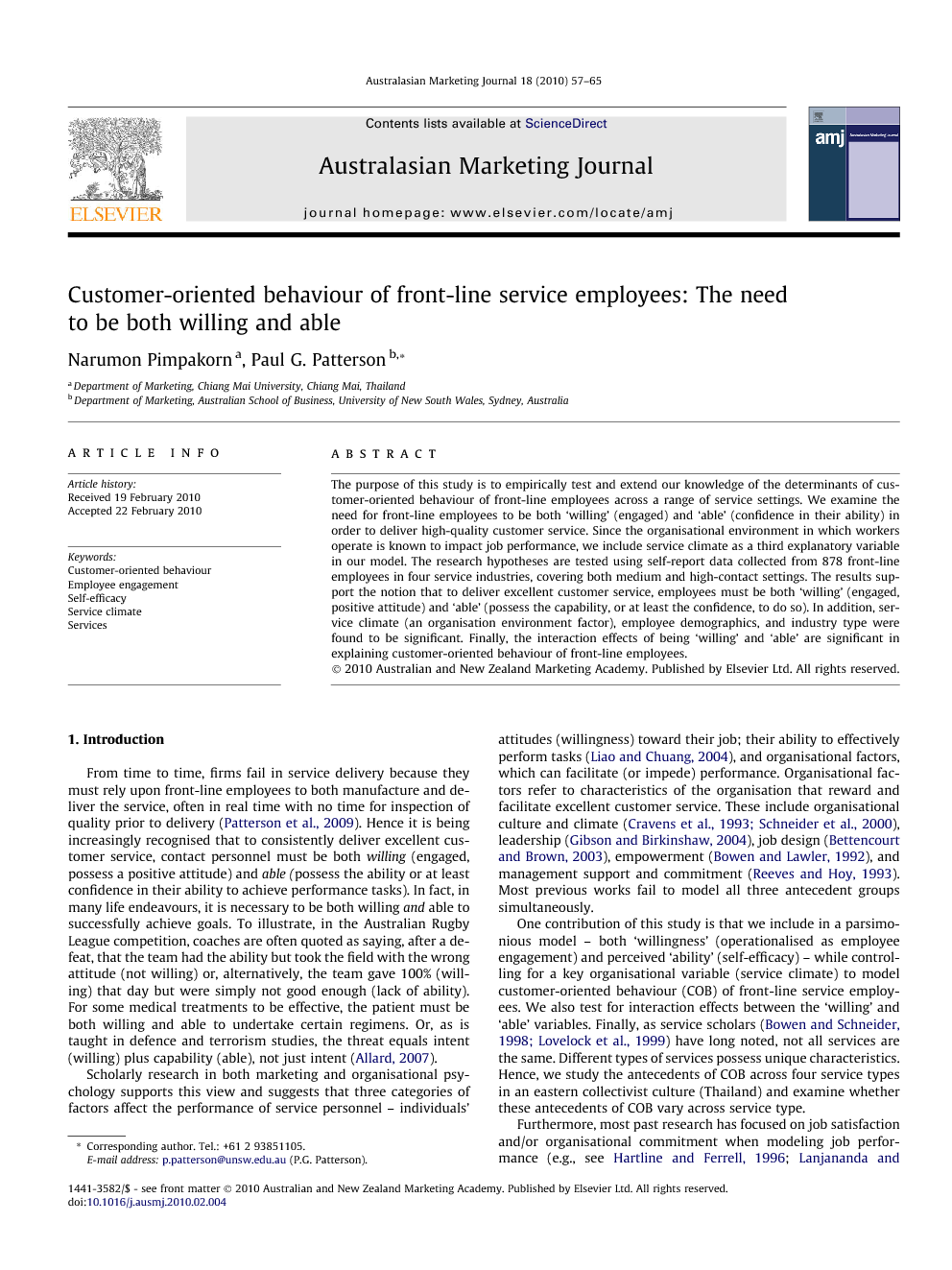 The purpose of this study is to empirically test and extend our knowledge of the determinants of customer-oriented behaviour of front-line employees across a range of service settings. We examine the need for front-line employees to be both ‘willing’ (engaged) and ‘able’ (confidence in their ability) in order to deliver high-quality customer service. Since the organisational environment in which workers operate is known to impact job performance, we include service climate as a third explanatory variable in our model. The research hypotheses are tested using self-report data collected from 878 front-line employees in four service industries, covering both medium and high-contact settings. The results support the notion that to deliver excellent customer service, employees must be both ‘willing’ (engaged, positive attitude) and ‘able’ (possess the capability, or at least the confidence, to do so). In addition, service climate (an organisation environment factor), employee demographics, and industry type were found to be significant. Finally, the interaction effects of being ‘willing’ and ‘able’ are significant in explaining customer-oriented behaviour of front-line employees.

From time to time, firms fail in service delivery because they must rely upon front-line employees to both manufacture and deliver the service, often in real time with no time for inspection of quality prior to delivery (Patterson et al., 2009). Hence it is being increasingly recognised that to consistently deliver excellent customer service, contact personnel must be both willing (engaged, possess a positive attitude) and able (possess the ability or at least confidence in their ability to achieve performance tasks). In fact, in many life endeavours, it is necessary to be both willing and able to successfully achieve goals. To illustrate, in the Australian Rugby League competition, coaches are often quoted as saying, after a defeat, that the team had the ability but took the field with the wrong attitude (not willing) or, alternatively, the team gave 100% (willing) that day but were simply not good enough (lack of ability). For some medical treatments to be effective, the patient must be both willing and able to undertake certain regimens. Or, as is taught in defence and terrorism studies, the threat equals intent (willing) plus capability (able), not just intent (Allard, 2007). Scholarly research in both marketing and organisational psychology supports this view and suggests that three categories of factors affect the performance of service personnel – individuals’ attitudes (willingness) toward their job; their ability to effectively perform tasks (Liao and Chuang, 2004), and organisational factors, which can facilitate (or impede) performance. Organisational factors refer to characteristics of the organisation that reward and facilitate excellent customer service. These include organisational culture and climate (Cravens et al., 1993 and Schneider et al., 2000), leadership (Gibson and Birkinshaw, 2004), job design (Bettencourt and Brown, 2003), empowerment (Bowen and Lawler, 1992), and management support and commitment (Reeves and Hoy, 1993). Most previous works fail to model all three antecedent groups simultaneously. One contribution of this study is that we include in a parsimonious model – both ‘willingness’ (operationalised as employee engagement) and perceived ‘ability’ (self-efficacy) – while controlling for a key organisational variable (service climate) to model customer-oriented behaviour (COB) of front-line service employees. We also test for interaction effects between the ‘willing’ and ‘able’ variables. Finally, as service scholars (Bowen and Schneider, 1998 and Lovelock et al., 1999) have long noted, not all services are the same. Different types of services possess unique characteristics. Hence, we study the antecedents of COB across four service types in an eastern collectivist culture (Thailand) and examine whether these antecedents of COB vary across service type. Furthermore, most past research has focused on job satisfaction and/or organisational commitment when modeling job performance (e.g., see Hartline and Ferrell, 1996; Lanjananda and Patterson, 2009). Little attention has been paid to employee involvement in their job or the enthusiasm they bring to their work. Employee attitudes and perceptions have been recognised as important predictors of employee behaviour and performance (Harter, 1999), and recent research suggests that employee engagement is a better predictor of performance (Macey et al., 2009). Employee engagement focuses on how the psychological experiences of work and work contexts shape the process of people presenting or absenting themselves during task performances. It encompasses an individual’s involvement and satisfaction as well as enthusiasm and a positive attitude for his or her work (Schaufeli et al., 2006). Consequently, a further contribution is that this is one of only a few studies to examine the predictive power of the engagement construct as an antecedent of front-line employee performance. The balance of the paper is structured as follows. First, we review the literature relating to modeling of customer-oriented behaviour of front-line service employees, and in doing so, we develop a parsimonious theoretical framework for empirical testing. We then describe the methodology used to collect data from employees in four service industries and explain how validity and reliability checks of measures were undertaken. We then present the results of a regression analysis and hypothesis testing, before finally discussing the managerial implications and study limitations.

In this paper, we have attempted to make several contributions to the knowledge base and study of the COB of front-line service personnel. This is one of the few studies that has simultaneously examined constructs representing ability and willingness, as well as organisational climate, on front-line service employee behaviour. Our empirical model, while designed to be parsimonious, does a sound job of explaining the variance around COB. It also shows that in addition to the organisational climate, being both willing and able go hand-in-glove in predicting employee COB. Further evidence of this was provided by the significant interaction effects involving the engagement and self-efficacy constructs. Perhaps not surprisingly, engagement (Engagement 1: “I am enthusiastic about my job” “My job inspires me”, and Engagement 2: “When I am working I forget everything around me” “I get carried away when I am working”) with a standardised combined coefficient of 0.41 had the greatest impact on COB. Engagement was also prominent among the interaction effects. This result is also consistent with Heskett et al. (1994) service-profit chain framework that claims happy, engaged employees deliver better customer service. Recent literature on engagement suggests that both recruitment (see Lanjananda and Patterson, 2009) and organisational factors (empowerment, rewards, transformational leadership) (Macey et al., 2009) can be beneficial in acquiring and then nurturing a sense of engagement in employees. Since engagement is key, firms must also give serious consideration to exiting employees who are disengaged to the point where empowerment, training, effective leadership, rewards, job enrichment, and so forth are ineffective. Efficacy 2 (“I feel confident that my skill and abilities equals or exceeds those of my colleagues”) had a significant direct impact on COB (standardised coefficient 0.19, p < 0.000), but, more important, it was also a significant component in all three interaction terms (see Table 2). Individuals who feel capable of performing particular tasks tend to carry them out more effectively. It is also positively related to proactive behaviour. Successful service organisations invest in their people. Training budgets should be driven by strategic goals and organisational realities, and not seen as discretionary expenditure. While self-efficacy is known to possess a dispositional element, it can nonetheless be influenced by education, on-the-job training, and mentoring. And as Heskett et al. (1994) point out, the role of leadership at the operational level can also have a profound effect. Next, the results (direct effect and significant interaction term) support the view that organisational climate for service (see results in Table 2) also plays a pivotal role in providing the necessary supporting environment to allow the employees willingness (attitude) and ability to manifest by providing quality customer service. This is consistent with the recent works of Schneider et al. (2002). As noted earlier, successful service firms require two key ingredients for service personnel to deliver excellent service: a concern for customers (customer-centric practices and policies) and a concern for employees (how the employees are treated and supported by management). Further, there is evidence that happy, engaged employees are more productive, and hence, higher levels of both customer satisfaction and firm productivity are likely to result from a positive and supportive service climate. Logic therefore dictates that investing in supporting and rewarding appropriate employee behaviours, providing customer-centric leadership, funding appropriate training, and providing the best tools and technology for employees to perform their roles represent a good long-term strategy. Developing a climate for service is an investment in not only improving service quality (and hence customer satisfaction) but firm productivity as well.