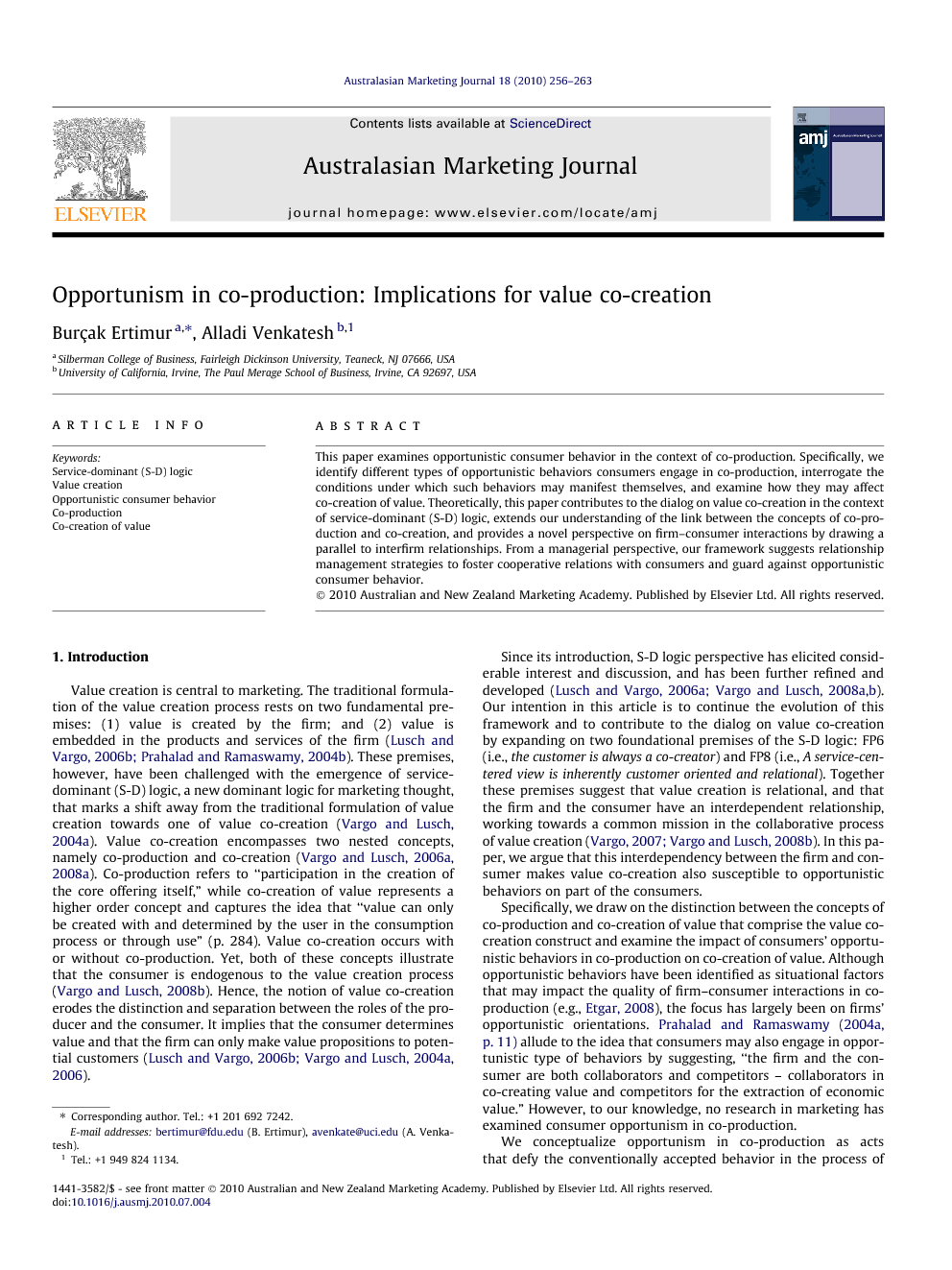 This paper examines opportunistic consumer behavior in the context of co-production. Specifically, we identify different types of opportunistic behaviors consumers engage in co-production, interrogate the conditions under which such behaviors may manifest themselves, and examine how they may affect co-creation of value. Theoretically, this paper contributes to the dialog on value co-creation in the context of service-dominant (S-D) logic, extends our understanding of the link between the concepts of co-production and co-creation, and provides a novel perspective on firm–consumer interactions by drawing a parallel to interfirm relationships. From a managerial perspective, our framework suggests relationship management strategies to foster cooperative relations with consumers and guard against opportunistic consumer behavior.

While the conceptual framework developed in this paper sheds light on some of the problems that characterize the firm–consumer interaction in the value creation process, it is not without limitations. For example, a key assumption that contributes to the arguments presented herein is the idea that consumers act in their own self-interest. However, the behavior of some consumers in co-production activities is guided by altruistic intentions as exemplified by the recent open source movement (OS). The OS movement can be conceptualized as an extreme case of co-production through which thousands of people collaborate to develop and distribute offerings. The computer software Linux and the free online encyclopedia Wikipedia are only some examples of the wide range of OS applications. The intellectual contributions of consumers to OS offerings are nonproprietary in nature. Moreover, they offer their skills and input without receiving any payment (Pitt et al., 2006). Hence, the ways in which alternative orientations of consumers may contribute to value co-creation emerges as an interesting area for future research. Future research is also needed to empirically assess the degree to which consumer opportunism exists in co-production activities and the ways in which it may be managed. Further research that considers the different types of contracts that may be used to define the terms of co-production would also help to develop our focus on governance of firm–consumer relationship in value co-creation. Lusch and Brown (1996) explain that contract format and exchange format are related although not identical constructs. Thus, relational exchanges that constitute the focus of our article are not necessarily governed by relational (i.e., normative) contracts. Indeed, several instances of consumer opportunism in co-production have caught the attention of lawyers, calling for a need to understand the different types of contracts that may be devised to govern firm–consumer collaborations (Marek, 2007). The goal of this article was to continue the evolution of the S-D logic by expanding upon its foundational premises regarding the collaborative and relational nature of value creation. Towards this end, we focused on susceptibility of co-production to consumers’ opportunistic behaviors and examined how they may affect value co-creation. From a theoretical standpoint, this paper provides a novel perspective on firm–consumer interaction by drawing a parallel to interfirm relationships, articulating how and why opportunistic behaviors may occur in co-production, and by assessing the implications of such behaviors for co-creation of value. In doing so, this paper also illustrates one of the ways in which co-production and co-creation of value are linked. From a managerial perspective, our framework suggests relationship management strategies to foster cooperative relations with co-producers and to guard against opportunistic co-producers behavior.