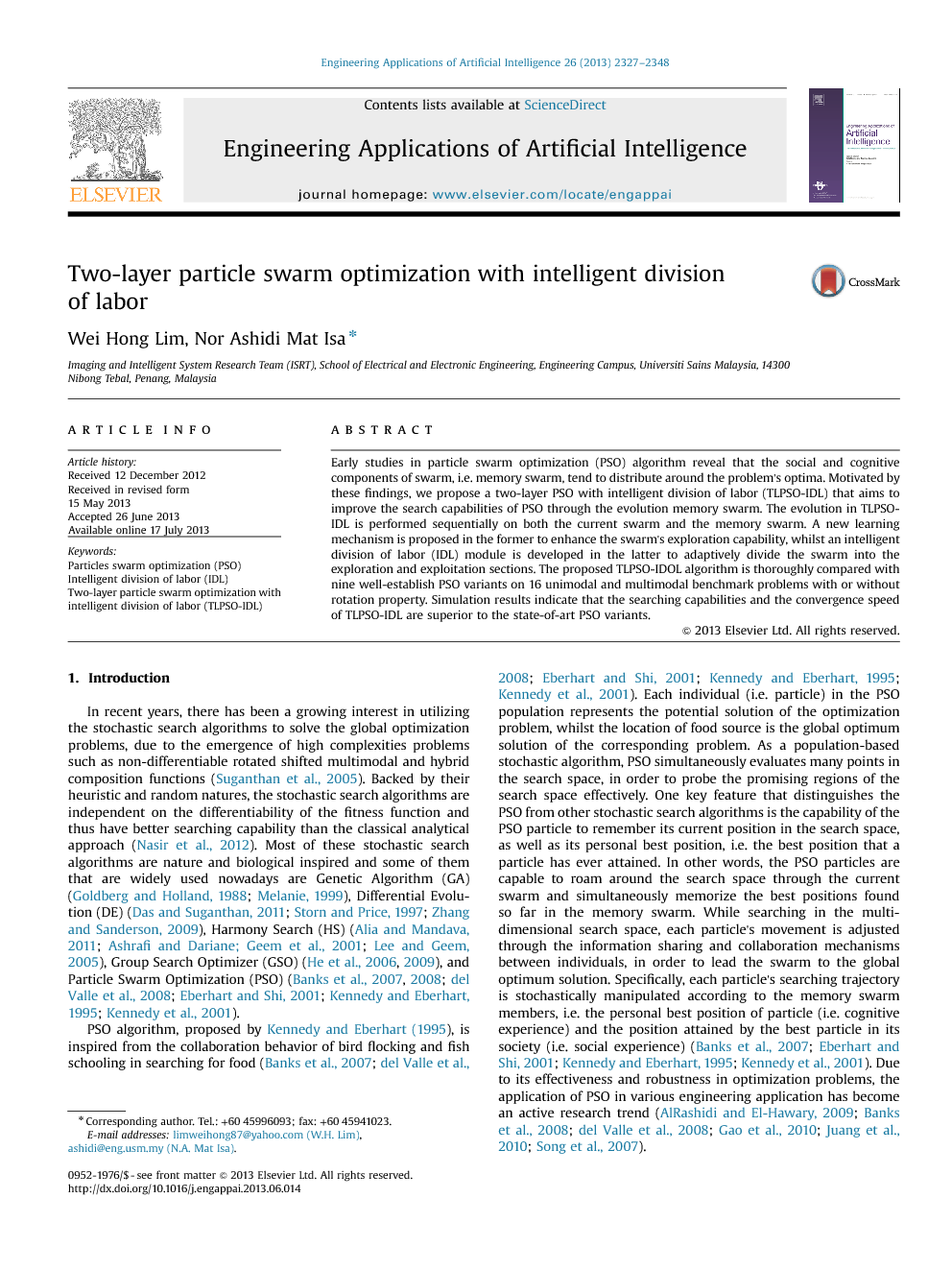 Early studies in particle swarm optimization (PSO) algorithm reveal that the social and cognitive components of swarm, i.e. memory swarm, tend to distribute around the problem's optima. Motivated by these findings, we propose a two-layer PSO with intelligent division of labor (TLPSO-IDL) that aims to improve the search capabilities of PSO through the evolution memory swarm. The evolution in TLPSO-IDL is performed sequentially on both the current swarm and the memory swarm. A new learning mechanism is proposed in the former to enhance the swarm's exploration capability, whilst an intelligent division of labor (IDL) module is developed in the latter to adaptively divide the swarm into the exploration and exploitation sections. The proposed TLPSO-IDOL algorithm is thoroughly compared with nine well-establish PSO variants on 16 unimodal and multimodal benchmark problems with or without rotation property. Simulation results indicate that the searching capabilities and the convergence speed of TLPSO-IDL are superior to the state-of-art PSO variants.

In recent years, there has been a growing interest in utilizing the stochastic search algorithms to solve the global optimization problems, due to the emergence of high complexities problems such as non-differentiable rotated shifted multimodal and hybrid composition functions (Suganthan et al., 2005). Backed by their heuristic and random natures, the stochastic search algorithms are independent on the differentiability of the fitness function and thus have better searching capability than the classical analytical approach (Nasir et al., 2012). Most of these stochastic search algorithms are nature and biological inspired and some of them that are widely used nowadays are Genetic Algorithm (GA) (Goldberg and Holland, 1988 and Melanie, 1999), Differential Evolution (DE) (Das and Suganthan, 2011, Storn and Price, 1997 and Zhang and Sanderson, 2009), Harmony Search (HS) (Alia and Mandava, 2011, Ashrafi and Dariane,, Geem et al., 2001 and Lee and Geem, 2005), Group Search Optimizer (GSO) (He et al., 2006 and He et al., 2009), and Particle Swarm Optimization (PSO) (Banks et al., 2007, Banks et al., 2008, del Valle et al., 2008, Eberhart and Shi, 2001, Kennedy and Eberhart, 1995 and Kennedy et al., 2001).

In this paper, we exploit the possibility to improve the PSO's searching performance through the evolution of cognitive and social experiences in the memory swarm. To this end, a TLPSO-IDL algorithm is proposed to evolve both the current and memory swarms sequentially during the optimization process. In the current swarm, a new learning mechanism is proposed to enhance the exploration strength of the current swarm. Meanwhile, a novel IDL module is proposed to perform the memory swarm evolution, whereby the division of labor's concept is employed in assisting the memory swarm to locate the unexplored regions or to refine the solution. On the other hand, the EBP module provides extra diversity to the population and enables it to break out of the local optima. According to the simulation results for 16 benchmark functions and one real-world problem, it is clearly that significant performance gains are achieved in the proposed TLPSO-IDL. From reported experimental results, we observe that the TLPSO-IDL performs excellent in both the traditional and rotated problems. Meanwhile, its performances in the shifted and complex problems are promising, although the results achieved in these problems are not as excellent as those in the traditional and rotated problems. We opine that the employment of the IDL module in memory swarm evolution alone might not be sufficient for the TLPSO-IDL to locate the shifted global optima in the latter problems. The performance of TLPSO-IDL in shifted and complex problems might be further improved by performing the division of labor mechanism on both the current and memory swarms’ evolutions, which will be considered as the future works.