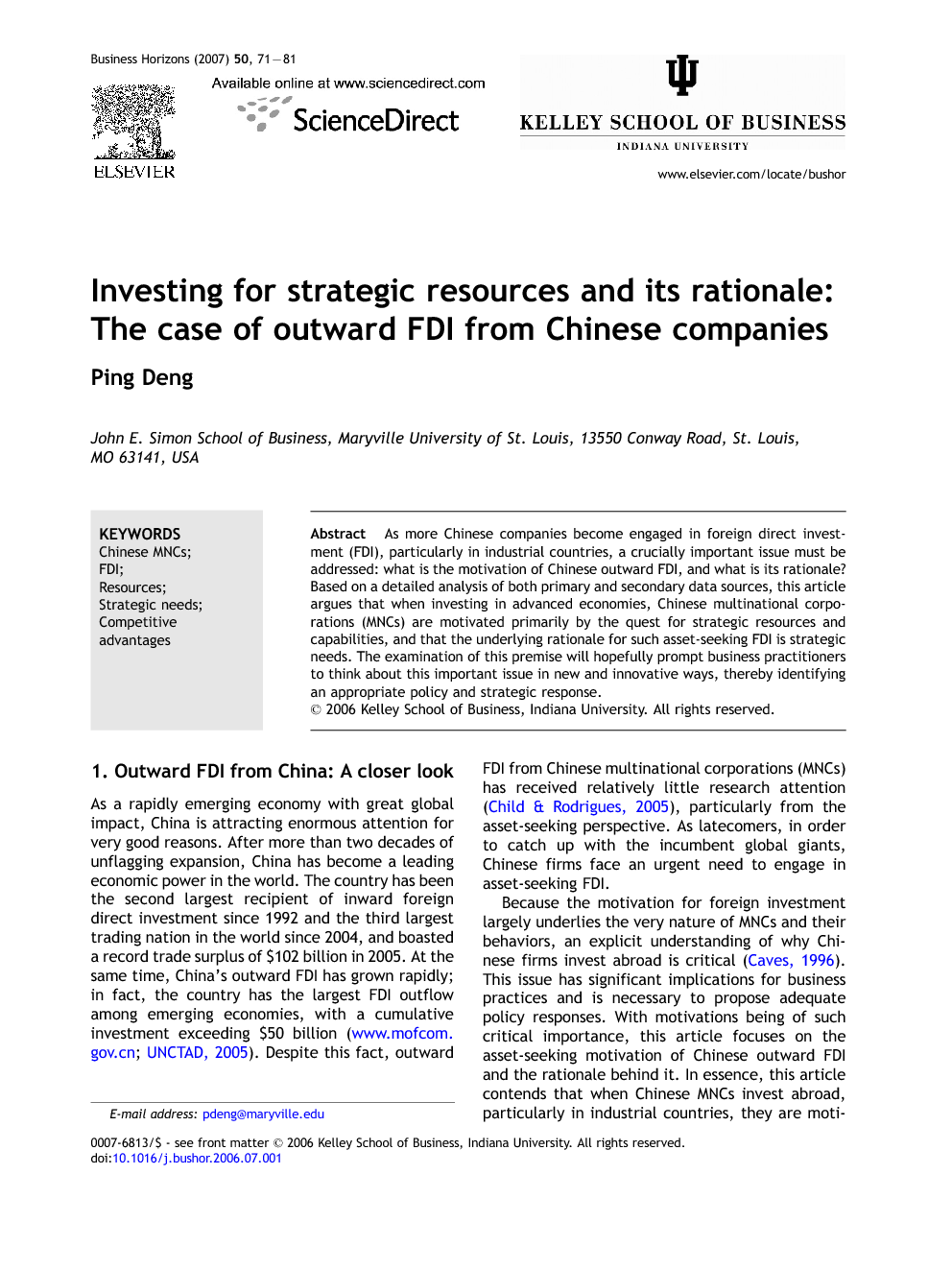 As more Chinese companies become engaged in foreign direct investment (FDI), particularly in industrial countries, a crucially important issue must be addressed: what is the motivation of Chinese outward FDI, and what is its rationale? Based on a detailed analysis of both primary and secondary data sources, this article argues that when investing in advanced economies, Chinese multinational corporations (MNCs) are motivated primarily by the quest for strategic resources and capabilities, and that the underlying rationale for such asset-seeking FDI is strategic needs. The examination of this premise will hopefully prompt business practitioners to think about this important issue in new and innovative ways, thereby identifying an appropriate policy and strategic response.

By using the strategic asset-seeking approach and supported by case study evidence, this article argues that a quest for strategic resources is the primary motivation behind Chinese MNCs' investment activities in industrial countries. In an effort to enhance their competitive advantage in the global marketplace, Chinese firms use asset-seeking FDI to access and obtain strategic resources that are available in advanced foreign markets, but which are limited in their home country. Within this line of logic, it is further argued that increasingly global competition would put Chinese MNCs in vulnerable strategic positions that would require additional resources to compensate for competitive disadvantages. On the other hand, largely stimulated by the Chinese government, many strong Chinese enterprises aspire to transform themselves into globally competitive multinationals. Such strategic aspiration in the context of vulnerable strategic position leads Chinese MNCs to engage in asset-seeking FDI in developed countries. As the first scholarly endeavor to apply the asset-seeking perspective to outward FDI from key Chinese firms, this article aims to prompt business academicians and practitioners to view this critically important issue in new and innovative ways. Perhaps the most important lesson for managers from this analysis is that by carefully adopting a strategy using asset-seeking FDI, Chinese MNCs may overcome competitive disadvantages versus fully fledged multinationals and enhance their competitive advantages in the global marketplace. This lesson is becoming increasingly crucial as many advanced countries, the United States included, are opening their markets to more and more foreign competition. The combination of strategic asset acquisition via FDI in developed countries and a cost advantage at home supported by a huge domestic marketplace would bring significant competitive advantages to Chinese MNCs. Moreover, with a more complete understanding of asset-seeking FDI, Chinese firms may pursue the strategy more aggressively. They may also more effectively manage the process by which strategic assets acquired via FDI are shared throughout the firm, thereby enhancing global competitiveness. Chinese firms that invest in advanced foreign countries, particularly through R&D affiliates, aim to access the host countries' centers of innovation and sources of new technology. In turn, this may lead to increasingly rapid dissipation of the knowledge stock accumulated by a host nation's firms. In an effort to maintain their lead, Western firms would be well advised to continuously upgrade their resources, and intensively and routinely conduct innovative R&D, rather than simply defend their capabilities and technologies. Furthermore, facing aggressive acquisitions from Chinese companies, it would be worthwhile for Western multinationals to consider the trade-off between advancement and retrenchment. This analysis would allow the firms to focus on the resources and capabilities that provide them with sharp competitive advantages, and to retreat from those with declining competitive advantages. For example, from the strategic management perspective, IBM appears wise to have allowed Lenovo to acquire its PC business. In having done so, IBM is now able to concentrate on competing in more profitable segments of its business. By successfully executing the deal, IBM has not only discarded what it views as a peripheral business, but has also secured access to the huge Chinese market by taking an 18.9% stake in Lenovo. Finally, from a policy point of view, it is imperative for policy makers, particularly in advanced economies, to make a win–win situation out of the ever-increasing outward FDI from Chinese MNCs. Unless national interests are truly threatened, policy makers should welcome such investment, particularly in terms of development, economic, and competitive benefits. It is a very encouraging signal that more countries, including developed economies such as Sweden, Canada, France, and Japan, have set up investment promotion agencies to attract new sources of FDI from China and other emerging countries. Given that a number of American manufacturers seem like a smooth fit for Chinese investors, it would be mutually advantageous to both countries if U.S. policy makers would begin to seriously consider how best to tap into the $854 billion in foreign reserves that China is holding.