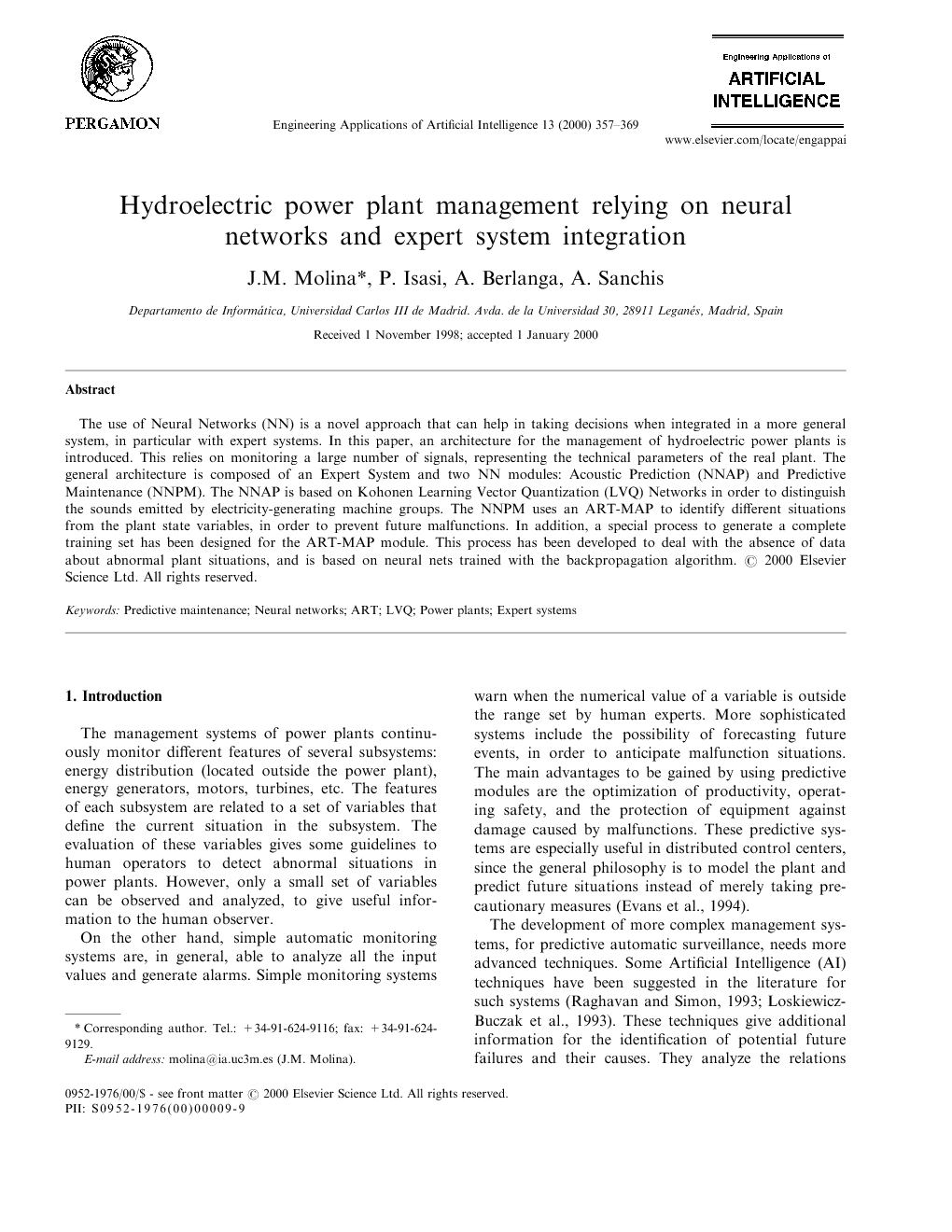 The use of Neural Networks (NN) is a novel approach that can help in taking decisions when integrated in a more general system, in particular with expert systems. In this paper, an architecture for the management of hydroelectric power plants is introduced. This relies on monitoring a large number of signals, representing the technical parameters of the real plant. The general architecture is composed of an Expert System and two NN modules: Acoustic Prediction (NNAP) and Predictive Maintenance (NNPM). The NNAP is based on Kohonen Learning Vector Quantization (LVQ) Networks in order to distinguish the sounds emitted by electricity-generating machine groups. The NNPM uses an ART-MAP to identify different situations from the plant state variables, in order to prevent future malfunctions. In addition, a special process to generate a complete training set has been designed for the ART-MAP module. This process has been developed to deal with the absence of data about abnormal plant situations, and is based on neural nets trained with the backpropagation algorithm.

The management systems of power plants continuously monitor different features of several subsystems: energy distribution (located outside the power plant), energy generators, motors, turbines, etc. The features of each subsystem are related to a set of variables that define the current situation in the subsystem. The evaluation of these variables gives some guidelines to human operators to detect abnormal situations in power plants. However, only a small set of variables can be observed and analyzed, to give useful information to the human observer. On the other hand, simple automatic monitoring systems are, in general, able to analyze all the input values and generate alarms. Simple monitoring systems warn when the numerical value of a variable is outside the range set by human experts. More sophisticated systems include the possibility of forecasting future events, in order to anticipate malfunction situations. The main advantages to be gained by using predictive modules are the optimization of productivity, operating safety, and the protection of equipment against damage caused by malfunctions. These predictive systems are especially useful in distributed control centers, since the general philosophy is to model the plant and predict future situations instead of merely taking precautionary measures (Evans et al., 1994). The development of more complex management systems, for predictive automatic surveillance, needs more advanced techniques. Some Artificial Intelligence (AI) techniques have been suggested in the literature for such systems (Raghavan and Simon, 1993 and Loskiewicz-Buczak et al., 1993). These techniques give additional information for the identification of potential future failures and their causes. They analyze the relations between items of data coming from vital components of a power plant, thereby making it possible to perform effective preventive maintenance. Knowledge-based systems (KBS) are able to provide valid ranges for variables, and to predict future abnormal situations from these values, using the expert knowledge of plant operators (Kim et al., 1994). In order to reduce the dependence of a final KBS on the knowledge-acquisition phase, some machine learning techniques (Yoshikawa et al., 1995) have also been applied. In particular, the use of neural networks (NN) is a good approach to predictive control systems because of the highly non-linear relationships between the data and the abnormal situations (Isasi et al., 1996 and Yonghong and Van Cauwenberghe, 1995). While an expert system tries to mimic the response of a human operator, analyzing the same variables as the human, the neural networks overcome these limits and try to analyze non-linear relations between many different signals. The man–machine communication is simple with an expert system, because the system could explain failures and also indicate why some decisions have been taken. This communication is hard with an NN, because the output depends non-linearly on different signals. So a complete integration of these two techniques could improve the global management system. Both the NN and the expert system information has been taken into account in the final decision. The former considers all the signals measured in the power plant, and makes a complex decision that considers the non-linear relations. The latter analyzes only a subset of the signals but can generate an explanation about the predicted events to support the human decision-making. In this work, a hybrid predictive system named MAPAIS (an abbreviation of the Spanish for an advanced system for predictive maintenance incorporating audio and video) has been developed to forecast alarms in a hydroelectric power plant, and is included in a complete monitoring system named HYPERVISION. All the information that is processed to monitor the plant could be divided in three clusters: internal state variables, audio signals and video signals. The internal state variables are related to physical measures (temperature, pressure, water level, oil level, revolutions, etc.) taken in several devices (valves, pipes, rotors, switches, etc.). The audio signals are recorded in turbines in order to capture the sound of the rotors and the water in different power situations, from normal to critical regimes. The video cameras record images from external power-plant components. All the recorded information is shown to human operator through the HYPERVISION multimedia interface, and is used to evaluate the performance of MAPAIS. The predictive system (MAPAIS) relies on advanced artificial intelligence techniques, audio and video signal processing, expert knowledge systems and NN modeling. Within the predictive modules of the system, the main goal of the NN maintenance module is to take advantage of the data recorded at every point in the hydroelectric plant. In this way, the predictive modules are acting as predictors of future incidents in the sense that they learn to detect situations of potential conflict. Inside the predictive system, two different NN have been developed: the first receives the values of all the internal state variables (NN Predictive Maintenance-NNPM), and the other takes the spectral values of different acoustic signal measures in the turbines (NN Acoustic Prediction-NNAP). The NNPM developed here is an ART-MAP that predicts the future situation in the power plant on the basis of the internal state variables. The NNAP is an LVQ NN that classifies audio spectrums into normal or abnormal acoustic noise. The use of NN using internal state variables when dealing with real situations (not simulations) adds an important problem: the acquisition of a complete set of data corresponding to abnormal situations is not possible, due to security and productivity restrictions in the plant. In this work, a special procedure for generating complete training sets has been developed. The non-linear relationships between the internal state variables have been obtained in a Multilayer Perceptron (MLP), trained using a backpropagation algorithm. The system is currently working in the hydroelectric plant named Villalcampo I (IBERDROLA), which is located in the Zamora province of Northwest Spain. This plant has also been used for implementing and further testing of the MAPAIS project.