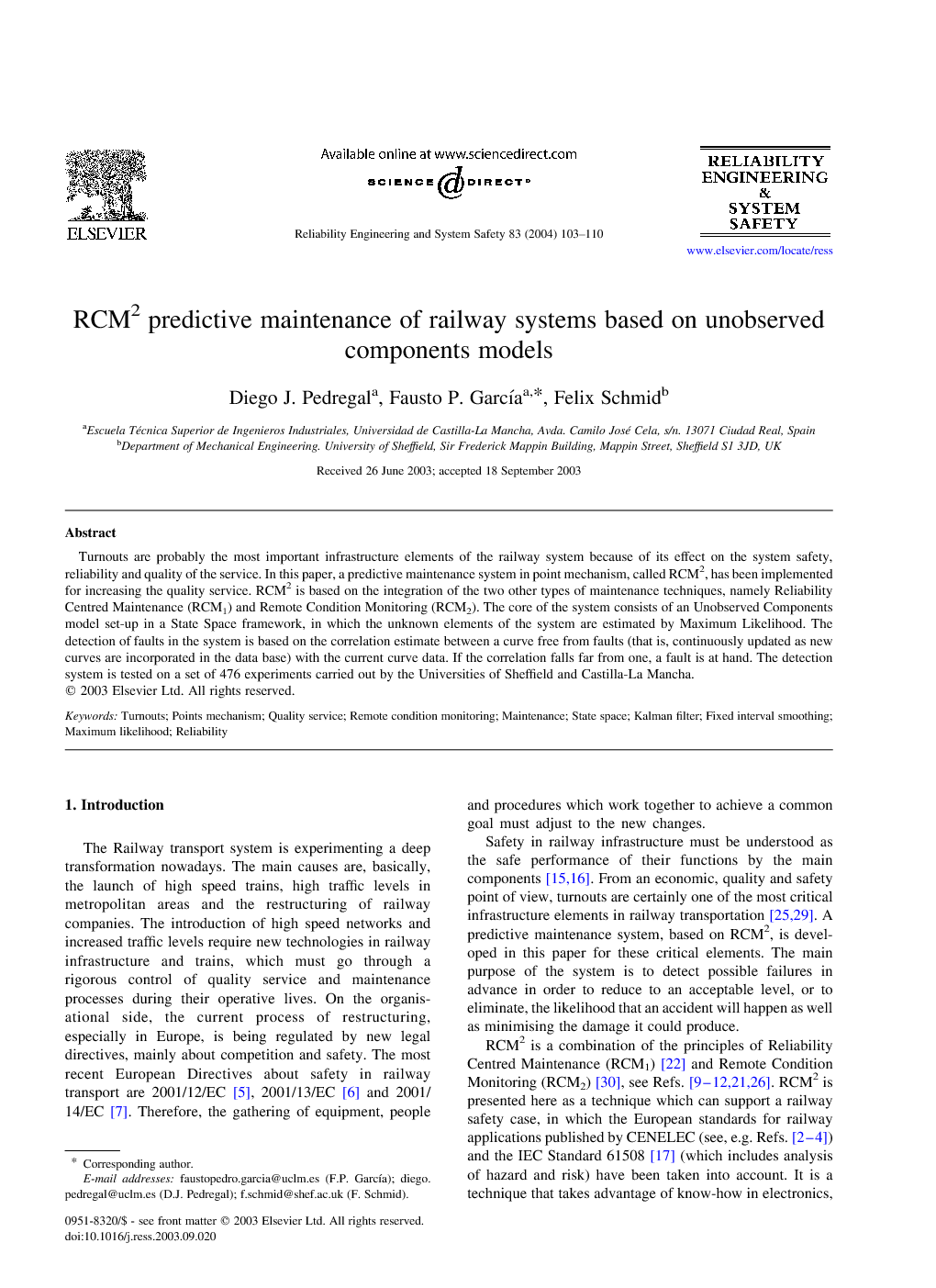 Turnouts are probably the most important infrastructure elements of the railway system because of its effect on the system safety, reliability and quality of the service. In this paper, a predictive maintenance system in point mechanism, called RCM2, has been implemented for increasing the quality service. RCM2 is based on the integration of the two other types of maintenance techniques, namely Reliability Centred Maintenance (RCM1) and Remote Condition Monitoring (RCM2). The core of the system consists of an Unobserved Components model set-up in a State Space framework, in which the unknown elements of the system are estimated by Maximum Likelihood. The detection of faults in the system is based on the correlation estimate between a curve free from faults (that is, continuously updated as new curves are incorporated in the data base) with the current curve data. If the correlation falls far from one, a fault is at hand. The detection system is tested on a set of 476 experiments carried out by the Universities of Sheffield and Castilla-La Mancha.

The Railway transport system is experimenting a deep transformation nowadays. The main causes are, basically, the launch of high speed trains, high traffic levels in metropolitan areas and the restructuring of railway companies. The introduction of high speed networks and increased traffic levels require new technologies in railway infrastructure and trains, which must go through a rigorous control of quality service and maintenance processes during their operative lives. On the organisational side, the current process of restructuring, especially in Europe, is being regulated by new legal directives, mainly about competition and safety. The most recent European Directives about safety in railway transport are 2001/12/EC [5], 2001/13/EC [6] and 2001/14/EC [7]. Therefore, the gathering of equipment, people and procedures which work together to achieve a common goal must adjust to the new changes. Safety in railway infrastructure must be understood as the safe performance of their functions by the main components [15] and [16]. From an economic, quality and safety point of view, turnouts are certainly one of the most critical infrastructure elements in railway transportation [25] and [29]. A predictive maintenance system, based on RCM2, is developed in this paper for these critical elements. The main purpose of the system is to detect possible failures in advance in order to reduce to an acceptable level, or to eliminate, the likelihood that an accident will happen as well as minimising the damage it could produce. RCM2 is a combination of the principles of Reliability Centred Maintenance (RCM1) [22] and Remote Condition Monitoring (RCM2) [30], see Refs. [9], [10], [11], [12], [21] and [26]. RCM2 is presented here as a technique which can support a railway safety case, in which the European standards for railway applications published by CENELEC (see, e.g. Refs. [2], [3] and [4]) and the IEC Standard 61508 [17] (which includes analysis of hazard and risk) have been taken into account. It is a technique that takes advantage of know-how in electronics, control, computing and communication technologies to address the multiple objectives of cost effectiveness, improved quality, reliability and services. The main hazards considered in the experiments carried out for this paper have been identified and analysed, with the intention of taking specific action to avoid them or to reduce the risk related to them, and a new algorithm for detecting these hazards has been developed, based on prediction in real time. The system is of the Unobserved Components (UC) class, implemented within a State Space (SS) framework. In essence, it searches for significant correlations between a reference curve and the new information coming from the critical components. The model parameters are updated on a continuous basis each time new data becomes available. The system developed has been tested in numerous experiments to show its efficiency. This system is able to find potential hazards, but the organization for the maintenance of the turnouts must set safety requirements for any change, to reduce the risk associated with the change to an acceptable level, carrying out an adequate safety plan according to regulations and relevant standards.

Railway operations have changed dramatically since the early 1990s, partly as a result of new European Union Directives which contribute to increased quality, reliability and safety in railway industry. In the same line, performance targets have become narrower and narrower with time. This is true for both rolling stock and infrastructure components, but the present paper focuses on the latter or, more precisely, on points maintenance. Four hundred and seventy six experiments (points moves or attempted point moves) were carried out. The data collected refers to force (N) versus time (s). For detecting faults in point mechanisms, a model was employed in order to capture the dynamic character of the system. The first conclusion after studying the data is that we can detect only a few faults by analysing the signal directly but, if we analyse the differences between the current data and the reference data in the form of absolute values, we can detect the majority of faults as they develop. The models explored to analyse point mechanism data in real time is a bivariate model composed of two time series, the reference curve on one hand and each of the rest of curves in turn, on the other hand. The model consists of a trend plus noise structure. The correlation between both trends or signals free from noise (i.e. ρ) is considered as an indication of similarity between the curves and therefore, the inexistence of failures. As a failure starts to develop, this parameter tends to differ from one in a statistical sense. The cut-off value of the correlation coefficient relevant to discern ‘good’ and ‘bad’ curves is selected on practical grounds based on past experience with this kind of data, but refined formal statistical criteria may be used as well. In essence, the model performance is remarkably good in both the Normal to Reverse and Reverse to Normal Directions type of data, implying that the system is quite useful in detecting the faults of the devices involved. In addition, the system is able to detect faults in on-line situations as they develop in time (based on the estimation of the correlation parameter) and it is also capable of producing sensible forecasts of the future state of the system that allows the detection of potential failures before they occur in practice. Thence, this kind of models may assist rail companies to find and prevent faults in point mechanisms.