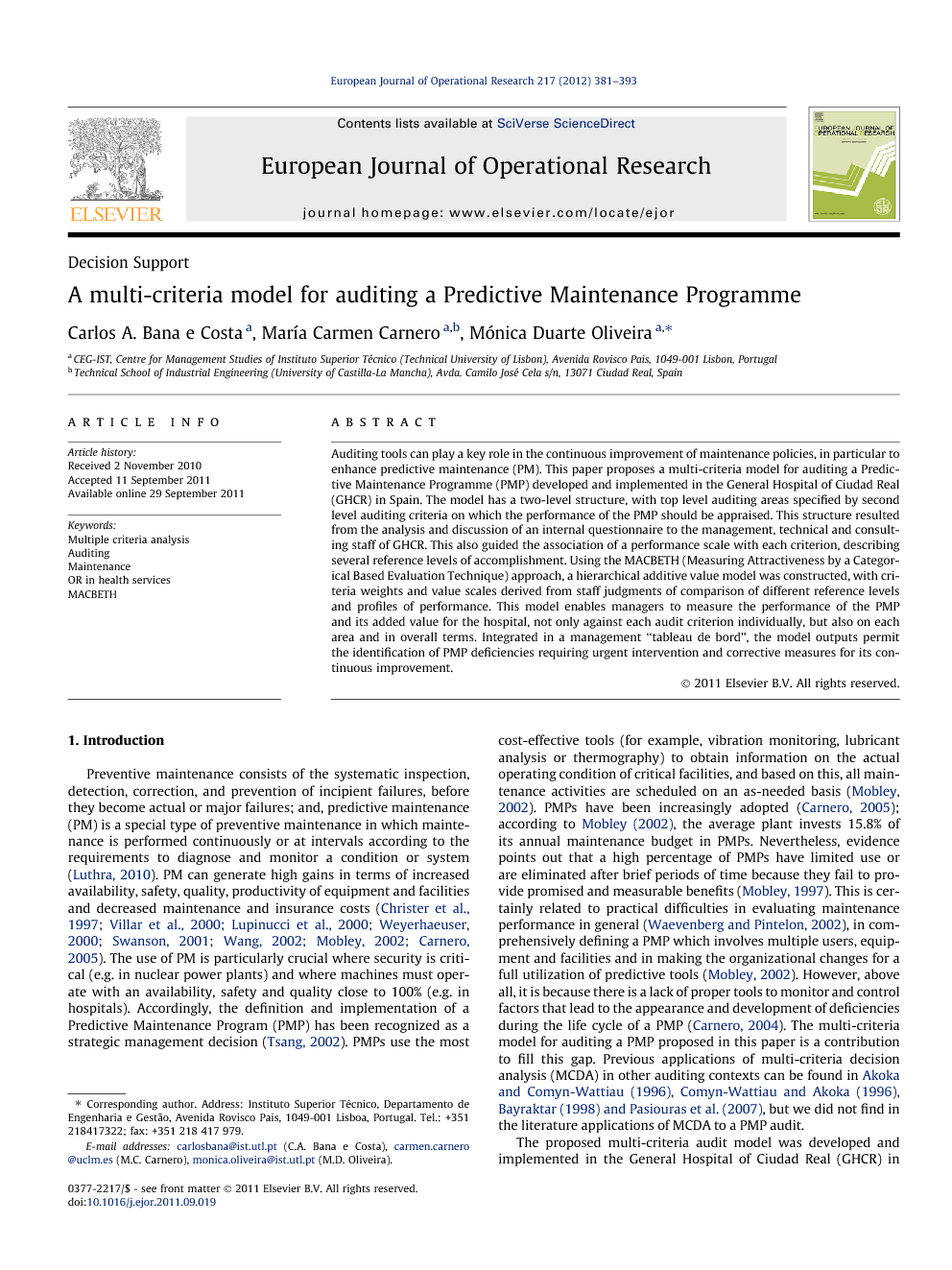 Auditing tools can play a key role in the continuous improvement of maintenance policies, in particular to enhance predictive maintenance (PM). This paper proposes a multi-criteria model for auditing a Predictive Maintenance Programme (PMP) developed and implemented in the General Hospital of Ciudad Real (GHCR) in Spain. The model has a two-level structure, with top level auditing areas specified by second level auditing criteria on which the performance of the PMP should be appraised. This structure resulted from the analysis and discussion of an internal questionnaire to the management, technical and consulting staff of GHCR. This also guided the association of a performance scale with each criterion, describing several reference levels of accomplishment. Using the MACBETH (Measuring Attractiveness by a Categorical Based Evaluation Technique) approach, a hierarchical additive value model was constructed, with criteria weights and value scales derived from staff judgments of comparison of different reference levels and profiles of performance. This model enables managers to measure the performance of the PMP and its added value for the hospital, not only against each audit criterion individually, but also on each area and in overall terms. Integrated in a management “tableau de bord”, the model outputs permit the identification of PMP deficiencies requiring urgent intervention and corrective measures for its continuous improvement.

Preventive maintenance consists of the systematic inspection, detection, correction, and prevention of incipient failures, before they become actual or major failures; and, predictive maintenance (PM) is a special type of preventive maintenance in which maintenance is performed continuously or at intervals according to the requirements to diagnose and monitor a condition or system (Luthra, 2010). PM can generate high gains in terms of increased availability, safety, quality, productivity of equipment and facilities and decreased maintenance and insurance costs (Christer et al., 1997, Villar et al., 2000, Lupinucci et al., 2000, Weyerhaeuser, 2000, Swanson, 2001, Wang, 2002, Mobley, 2002 and Carnero, 2005). The use of PM is particularly crucial where security is critical (e.g. in nuclear power plants) and where machines must operate with an availability, safety and quality close to 100% (e.g. in hospitals). Accordingly, the definition and implementation of a Predictive Maintenance Program (PMP) has been recognized as a strategic management decision (Tsang, 2002). PMPs use the most cost-effective tools (for example, vibration monitoring, lubricant analysis or thermography) to obtain information on the actual operating condition of critical facilities, and based on this, all maintenance activities are scheduled on an as-needed basis (Mobley, 2002). PMPs have been increasingly adopted (Carnero, 2005); according to Mobley (2002), the average plant invests 15.8% of its annual maintenance budget in PMPs. Nevertheless, evidence points out that a high percentage of PMPs have limited use or are eliminated after brief periods of time because they fail to provide promised and measurable benefits (Mobley, 1997). This is certainly related to practical difficulties in evaluating maintenance performance in general (Waevenberg and Pintelon, 2002), in comprehensively defining a PMP which involves multiple users, equipment and facilities and in making the organizational changes for a full utilization of predictive tools (Mobley, 2002). However, above all, it is because there is a lack of proper tools to monitor and control factors that lead to the appearance and development of deficiencies during the life cycle of a PMP (Carnero, 2004). The multi-criteria model for auditing a PMP proposed in this paper is a contribution to fill this gap. Previous applications of multi-criteria decision analysis (MCDA) in other auditing contexts can be found in Akoka and Comyn-Wattiau, 1996, Comyn-Wattiau and Akoka, 1996, Bayraktar, 1998 and Pasiouras et al., 2007, but we did not find in the literature applications of MCDA to a PMP audit. The proposed multi-criteria audit model was developed and implemented in the General Hospital of Ciudad Real (GHCR) in Spain, within the scope of a R&D project with the University of Castilla-La Mancha. The project involved management, technical and consulting staff of GHCR and was motivated by the recognition of the importance of PM to pursue the hospital mission. In fact, the GHCR was the first hospital in Spain to set up a PMP. The project included the study of the potentialities of applying the MACBETH (Measuring Attractiveness by a Categorical Based Evaluation Technique) approach to PM (Carnero, 2009), which led to an initial prototype of the model (Carnero, 2006). MACBETH (Bana e Costa and Vansnick, 1994, Bana e Costa and Vansnick, 1999 and Bana e Costa et al., 2011) enables a quantitative PMP audit model to be built based on staff qualitative judgements about differences in attractiveness (or added value to the hospital) between reference levels of performance of the PMP in multiple audit dimensions. A brief technical overview of MACBETH is included in Section 3.1.1. Before that, Section 2 presents background information on the scope and purpose of the project. The model was developed as described in Section 3 and implemented in the GHCR in 2008. Results from the first year of application of the model to audit the hospital PMP are presented in Section 4. Finally, Section 5 discusses issues and lessons learned from the process of developing and implementing the model.