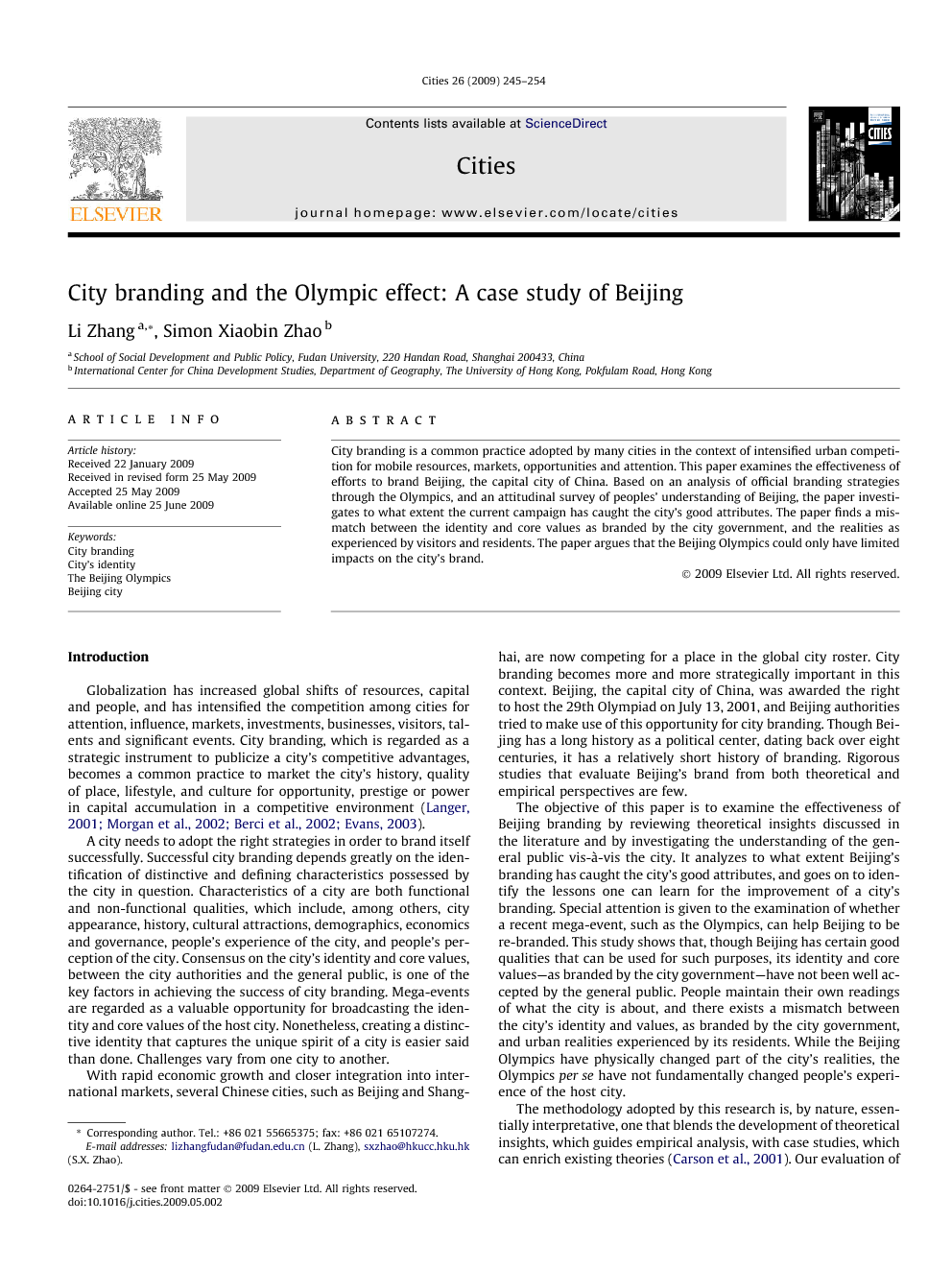 City branding is a common practice adopted by many cities in the context of intensified urban competition for mobile resources, markets, opportunities and attention. This paper examines the effectiveness of efforts to brand Beijing, the capital city of China. Based on an analysis of official branding strategies through the Olympics, and an attitudinal survey of peoples’ understanding of Beijing, the paper investigates to what extent the current campaign has caught the city’s good attributes. The paper finds a mismatch between the identity and core values as branded by the city government, and the realities as experienced by visitors and residents. The paper argues that the Beijing Olympics could only have limited impacts on the city’s brand.

Globalization has increased global shifts of resources, capital and people, and has intensified the competition among cities for attention, influence, markets, investments, businesses, visitors, talents and significant events. City branding, which is regarded as a strategic instrument to publicize a city’s competitive advantages, becomes a common practice to market the city’s history, quality of place, lifestyle, and culture for opportunity, prestige or power in capital accumulation in a competitive environment (Langer, 2001, Morgan et al., 2002, Berci et al., 2002 and Evans, 2003). A city needs to adopt the right strategies in order to brand itself successfully. Successful city branding depends greatly on the identification of distinctive and defining characteristics possessed by the city in question. Characteristics of a city are both functional and non-functional qualities, which include, among others, city appearance, history, cultural attractions, demographics, economics and governance, people’s experience of the city, and people’s perception of the city. Consensus on the city’s identity and core values, between the city authorities and the general public, is one of the key factors in achieving the success of city branding. Mega-events are regarded as a valuable opportunity for broadcasting the identity and core values of the host city. Nonetheless, creating a distinctive identity that captures the unique spirit of a city is easier said than done. Challenges vary from one city to another. With rapid economic growth and closer integration into international markets, several Chinese cities, such as Beijing and Shanghai, are now competing for a place in the global city roster. City branding becomes more and more strategically important in this context. Beijing, the capital city of China, was awarded the right to host the 29th Olympiad on July 13, 2001, and Beijing authorities tried to make use of this opportunity for city branding. Though Beijing has a long history as a political center, dating back over eight centuries, it has a relatively short history of branding. Rigorous studies that evaluate Beijing’s brand from both theoretical and empirical perspectives are few. The objective of this paper is to examine the effectiveness of Beijing branding by reviewing theoretical insights discussed in the literature and by investigating the understanding of the general public vis-à-vis the city. It analyzes to what extent Beijing’s branding has caught the city’s good attributes, and goes on to identify the lessons one can learn for the improvement of a city’s branding. Special attention is given to the examination of whether a recent mega-event, such as the Olympics, can help Beijing to be re-branded. This study shows that, though Beijing has certain good qualities that can be used for such purposes, its identity and core values—as branded by the city government—have not been well accepted by the general public. People maintain their own readings of what the city is about, and there exists a mismatch between the city’s identity and values, as branded by the city government, and urban realities experienced by its residents. While the Beijing Olympics have physically changed part of the city’s realities, the Olympics per se have not fundamentally changed people’s experience of the host city. The methodology adopted by this research is, by nature, essentially interpretative, one that blends the development of theoretical insights, which guides empirical analysis, with case studies, which can enrich existing theories (Carson et al., 2001). Our evaluation of Beijing branding is based mainly on a review of the literature of city branding and study of relevant government documents, interviews with officials from the Marketing Department and the Technology Department of The Beijing Organizing Committee for the Games of the 29th Olympiad (hereafter BOCOG), and an attitudinal survey conducted in two periods (18th–24th March 2008, a few months before the Beijing Olympic Games, and 9th–13th September 2008, the period shortly after the Games). Questionnaires were randomly distributed at two sites: (1) Tiananmen Square, a landmark and a hot scenic spot for visitors and in the center of Beijing city, (2) the Sanlitun and Houhai Area, the well-known and most popular night-life spot that attracted many foreign tourists. Taking reference of both Anholt’s and Kavaratzis’s frameworks for the evaluation of city branding, we categorized the questions into four parts, based on the official objectives to brand Beijing as an international city, a famous cultural city, a livable city, and a great host of the 29th Olympiad. These objectives were specified in two government documents: Beijing City Master Plan (2004–2020) and The Olympic Action Plan. The questions aimed at seeking the people’s understanding of Beijing’s identity and branding effects. The questions were mostly objective, insofar as respondents had to rate them by an agreement scale, with 5 being the highest score, the strongest agreement and 1 being the lowest score, the strongest disagreement. There were also open-ended questions where respondents were able to provide additional views and make suggestions in free-text form. In total, 100 people participated in the surveys. Among them, 30% of respondents were Beijing residents, 30% were domestic visitors, and 40% were foreigners who visited or worked in Beijing. The rest of this paper is organized as follows. The following section reviews strategies commonly used in city branding as well as important considerations for the evaluation of city branding, as discussed in the literature. This is followed by an analysis of the case of Beijing. The analysis is done, first by narrating the official designation of the city’s identity and core values, and then by discussing public perspectives on the officially-designated identity and values. The final section extracts lessons from our empirical investigation.

City branding is a popular practice adopted by many cities around the world in the context of intensified urban competition. Beijing is no exception in this regard. This research reviews Beijing’s branding strategy and examines its branding effect. It demonstrates that, while the branding initiatives that Beijing took were by no means unique in comparison with the practices implemented elsewhere, it was an essentially state-led top-down process. This led to a mismatch between the city’s identity and core values branded by the government and an understanding of the city in peoples’ minds. Acknowledgement of this mismatch addressed an issue that the city government and the general public read the city in different metaphors. The city government tended to interpret the city’s identity and values in accordance with the government’s vision and motivation of development. The top-down city branding tried to convey the goals that the city authority intended. Nonetheless, the general public often viewed the city with the city’s utility functions and their expectations of personal prosperity. It seemed that the city’s rhetorical values promoted by the government did not well represent peoples’ own experience and perception. To achieve more effective city branding, it is important to change people’s unfavorable perceptions of the city. A lesson one can learn from the Beijing case is that the mismatch could be minimized with more communication and closer cooperation between the city authorities and the general public. The city’s core values can be better identified and accepted with more active public participation in city branding. This does not necessarily require a well-established democratic system. What is required is acknowledgement of the need to establish more channels of citizen feedback to create “error-correction mechanisms” that makes city branding win people’s hearts and minds. Another lesson one can learn from the Beijing case is that city branding is a long-term process in which the branding goals cannot be effectively achieved through a single event, even if that event itself is high-profile and can generate worldwide attention and global influence. The branding opportunities provided by an international mega-event constituted an important but only fractional part of the entire process. Taking into account the respondent comments in our survey, one can conclude that a better way of city branding should address the appealing values and images that do not have a big contrast or controversy to the observable economic and social reality, and should be capable of changing negative images that are perceived by many. This suggests that city branding should be part of long-term economic and social development. The city’s identity and core values need to be pursued, not only in official propaganda programs, but also in the development practices that produce them. City branding does not simply refer to the exclusive use of promotional ways such as logos or slogans, but, strategically, should include many more areas of activities. From this point of view, international mega-events can provide good opportunities to promote growth and to enhance the sense of the city to some extent. Nonetheless, they can only generate limited effects on fundamentally solving the long-existing economic and social problems as well as on construction of the city’s identity and core values, because such events are simply not designed as an instrument of public policy or urban planning. While the Beijing Olympics were hailed internationally as a successful event, at least in terms of the athletic events themselves, and led to positive effects on the increased levels of tourism, employment and business opportunities for a certain period, its long-term effects on the economic and social transformation of the city in general, and on Beijing branding in particular, remain to be seen.