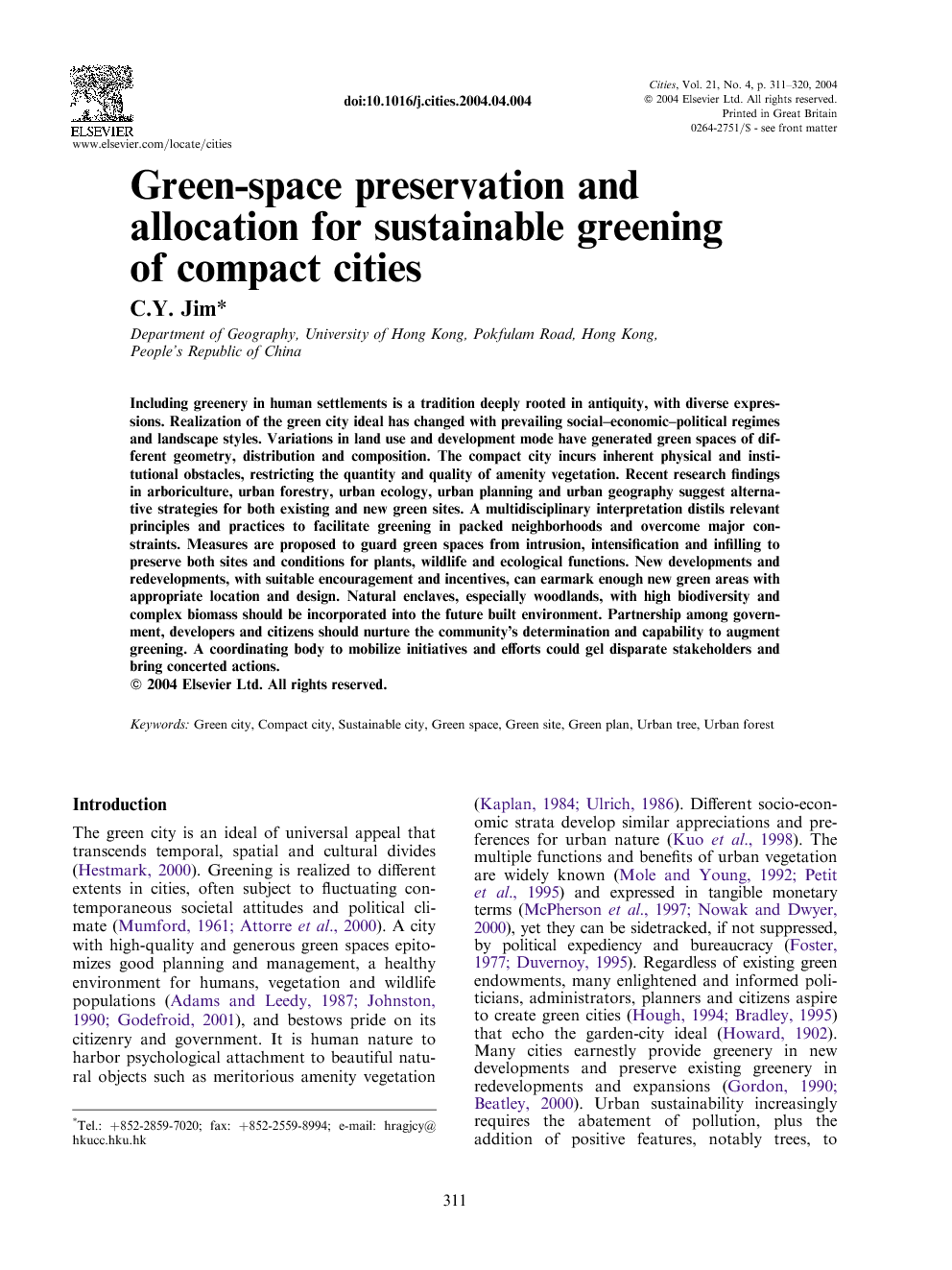 Including greenery in human settlements is a tradition deeply rooted in antiquity, with diverse expressions. Realization of the green city ideal has changed with prevailing social–economic–political regimes and landscape styles. Variations in land use and development mode have generated green spaces of different geometry, distribution and composition. The compact city incurs inherent physical and institutional obstacles, restricting the quantity and quality of amenity vegetation. Recent research findings in arboriculture, urban forestry, urban ecology, urban planning and urban geography suggest alternative strategies for both existing and new green sites. A multidisciplinary interpretation distils relevant principles and practices to facilitate greening in packed neighborhoods and overcome major constraints. Measures are proposed to guard green spaces from intrusion, intensification and infilling to preserve both sites and conditions for plants, wildlife and ecological functions. New developments and redevelopments, with suitable encouragement and incentives, can earmark enough new green areas with appropriate location and design. Natural enclaves, especially woodlands, with high biodiversity and complex biomass should be incorporated into the future built environment. Partnership among government, developers and citizens should nurture the community’s determination and capability to augment greening. A coordinating body to mobilize initiatives and efforts could gel disparate stakeholders and bring concerted actions.

The green city is an ideal of universal appeal that transcends temporal, spatial and cultural divides (Hestmark, 2000). Greening is realized to different extents in cities, often subject to fluctuating contemporaneous societal attitudes and political climate (Mumford, 1961 and Attorre et al., 2000). A city with high-quality and generous green spaces epitomizes good planning and management, a healthy environment for humans, vegetation and wildlife populations (Adams and Leedy, 1987, Johnston, 1990 and Godefroid, 2001), and bestows pride on its citizenry and government. It is human nature to harbor psychological attachment to beautiful natural objects such as meritorious amenity vegetation (Kaplan, 1984 and Ulrich, 1986). Different socio-economic strata develop similar appreciations and preferences for urban nature (Kuo et al., 1998). The multiple functions and benefits of urban vegetation are widely known (Mole and Young, 1992 and Petit et al., 1995) and expressed in tangible monetary terms (McPherson et al., 1997 and Nowak and Dwyer, 2000), yet they can be sidetracked, if not suppressed, by political expediency and bureaucracy (Foster, 1977 and Duvernoy, 1995). Regardless of existing green endowments, many enlightened and informed politicians, administrators, planners and citizens aspire to create green cities (Hough, 1994 and Bradley, 1995) that echo the garden-city ideal (Howard, 1902). Many cities earnestly provide greenery in new developments and preserve existing greenery in redevelopments and expansions (Gordon, 1990 and Beatley, 2000). Urban sustainability increasingly requires the abatement of pollution, plus the addition of positive features, notably trees, to ameliorate the new scarcity of healthy environments (Finco and Nijkamp, 2003). Compact urban areas are characterized by the close juxtaposition of buildings and roads with limited interstitial space to insert greenery; mixed land use; and a union of form and function (Jenks et al., 1996). The compact city here encompasses the high-density built form (Burton, 2002) with a high proportion of the land surface covered by buildings and other artificial structures and surfaces. The ratio of impervious to pervious areas is very high (Arnold and Gibbons, 1996), and conditions for plant and animal life are usually trying. The advantages and disadvantages of compactness have been well expounded. Many cities contain areas with exceptionally high development density in the inner city or the old urban core, formed by organic accretions. Some cities develop new compact areas or infill existing areas to a higher density (Williams, 1999). Whether old, modified or new, such compactness needs more attention to green-space provision and environmental well-being, which could be overlooked or sacrificed (Jim, 1990). If green space is deprived, a compact city becomes the antithesis of a green city. The destruction of existing vegetation and inadequate plantable spaces (Jim, 2000) degrade the environmental quality, quality of life and human health (Jackson, 2003). The case of cities in developing countries in particular is worrying because of the urge to take the myopic path of developing first and making amends later (Olembo and de Rham, 1987), and failing to benefit from other cities’ experience. The exigencies of meeting basic needs and development aspirations may overshadow greenery and other environmental concerns (Marcotullio, 2001). Rapid urbanization and intensification, especially in some developing cities, could compromise environmental planning. Whereas individual cities have unique problems and limitations in implementing the greening imperative, most physical and physiological constraints that beset vegetation growth tend to be generic (Grey and Deneke, 1986, Bradshaw et al., 1995 and Jim and Liu, 2001a). The constraints, however, are manifested at an increasing magnitude and pervasiveness in areas with condensed development. An understanding of the tangible and intangible limitations (Grey, 1996 and Miller, 1997) could provide hints to maximize opportunities for green space and greenery in the sustainable city quest. Urban greening, a common if not universal environmental issue, deserves more attention and resource support, with strengthening of both policies and practices. Comparing to spacious developments, green spaces for compact city areas encounter more restrictions and stresses, and are more amenable to degradation and losses (Jim, 2002a). Their green-space planning and management require more dedicated and coordinated efforts. This paper, adopting a problem-based approach, surveys the pertinent limitations to greening in packed city precincts, proposes precautions and preventive measures to forestall greenery degradation, and identifies practical alternatives, solutions and opportunities for greenery. With planning and foresight, compact areas could provide a reasonable quantity and quality of amenity vegetation to ameliorate the harsh milieu. The first-hand experience on urban greening in compact cities, which epitomizes some of the extremely packed urban form, in conjunction with observations in other cities, provides information and insight for the ensuing analysis. By modifying existing approaches or adopting innovative ones, whether successful or otherwise, cities offer empirical examples from the standpoint of both researchers and practitioners. Urban greening is inherently a multivariate venture that demands the union of knowledge from disparate expertise and disciplines, and that the experience of a city could often be useful to others. Many fine cases, good practices and object lessons, however, remain obscure or fail to propagate and be applied outside their original realms. The gap between research and application and between science and practice, in the field of urban greening, needs to be closed by a more effective amalgamation of ideas and communication. Recent research findings in a group of cognate disciplines, including arboriculture, urban forestry, urban ecology, urban planning and urban geography, have nurtured an interdisciplinary confluence that could be translated into policies and practices. A comprehensive review can serve to integrate the latest findings in the field from a planning perspective. With a longer life span, larger biomass and more notable environmental functions, trees are used as the surrogate of urban vegetation in the discussion. Relevant issues will be explored from the viewpoint of two fundamental entities in the urban greening equation, namely existing and new green sites. Existing sites have to be preserved against development pressure, and new ones adequately designated in new developments. The analysis is structured around five basic questions, namely what, where, when, how and who? The principles are expounded first, followed by their translation into practices to implement greening endeavors. Where appropriate, actual examples will be used to support or illustrate the exposition.

The institution of the city has been extolled as the epitome of human cultural achievement, and the crucible of recent scientific–technological innovations. The long history of urban development has generated a diversity of forms and functions due to organic growth or conceived plans. Admitting nature as a companion to the built environment is rooted in antiquity and had been earnestly revived over several centuries ago in some cities (Lawrence, 1988). The phenomenal city expansion and intensification in recent decades have somewhat diluted the greening tradition. While some cities manage to retain or even extend their green spaces, others experience degradation and destruction. Compact cities tended to encounter more inherent restrictions to greening, and many cities in developing countries have inherited the old compact form. In the course of environmental transition, cities could attempt to keep as many as possible of the environmental-sustainability ingredients, including green spaces (Marcotullio, 2001). With more people moving into cities in the developing nations, the need to maintain the quality of growth has become all the more pertinent (Thomas et al., 1999). The urban renaissance conducted in some developed cities could pay tribute to the need to enhance greenery as a means for environmental and economic revival (Hughes, 1991). The recent trend to adopt the compact city policy in some developed countries (Burton, 2002) also calls for a different approach to greening. As some of their development paths might begin to converge, cities in both the developed and developing worlds could learn the art and science of urban greening from each other. The innate desire to be close to nature can hardly be extinguished, and it tends to be kindled earnestly in the increasingly cramped and stressful compact city milieu. The ideas of the livable city (Lennard and Lennard, 1987) and the ecological city (Platt et al., 1994) have blossomed into the sustainable city (Roseland, 1998 and Newman, 1999) conception, which should give a direction rather than a target to future urban developments. Many municipal authorities would strive to bring the elegant theoretical considerations down to earth. It will be a multidimensional and multivariate endeavor, which by necessity needs to involve various government and non-government efforts. Greening cities, especially upgrading compact urban areas with greenery, is widely advocated as a key feature of a livable and sustainable city. By itself, greening could serve as a necessary but not sufficient condition towards urban sustainability; at best, it could only afford a partial answer. It is, however, an important piece of the bewildering jigsaw puzzle as humanity attempts to find an alternative and elusive urban-growth paradigm that departs from those that have been used for millennia. Whereas it is well known that socio-economic benefits carry environmental costs, it is high time to accept the reciprocal reasoning, that is, that environmental benefits have to incur socio-economic costs. The reversal will be more costly and less agreeable, for we need to repair the past ills as well as augmenting the benefits. It is a transgenerational time warp, in that the greening deficits of the previous generations have to be made good by the present and future generations. The notion of bestowing cities with trees has been well received for their utilitarian environmental and ornamental functions. To usher green sites and to fill them with meritorious vegetation require the assiduous contributions of many parties working closely together and breaking barriers in mindset and practice. Physical and institutional obstacles would have to be overcome. A survey of the relevant recent advances, from a multidisciplinary viewpoint, can provide useful insights, possibilities and opportunities. The necessary knowledge to effect fine greenery in compact cities exists disparately in a cluster of cognate fields, and they need to be knitted together into an implementable package.