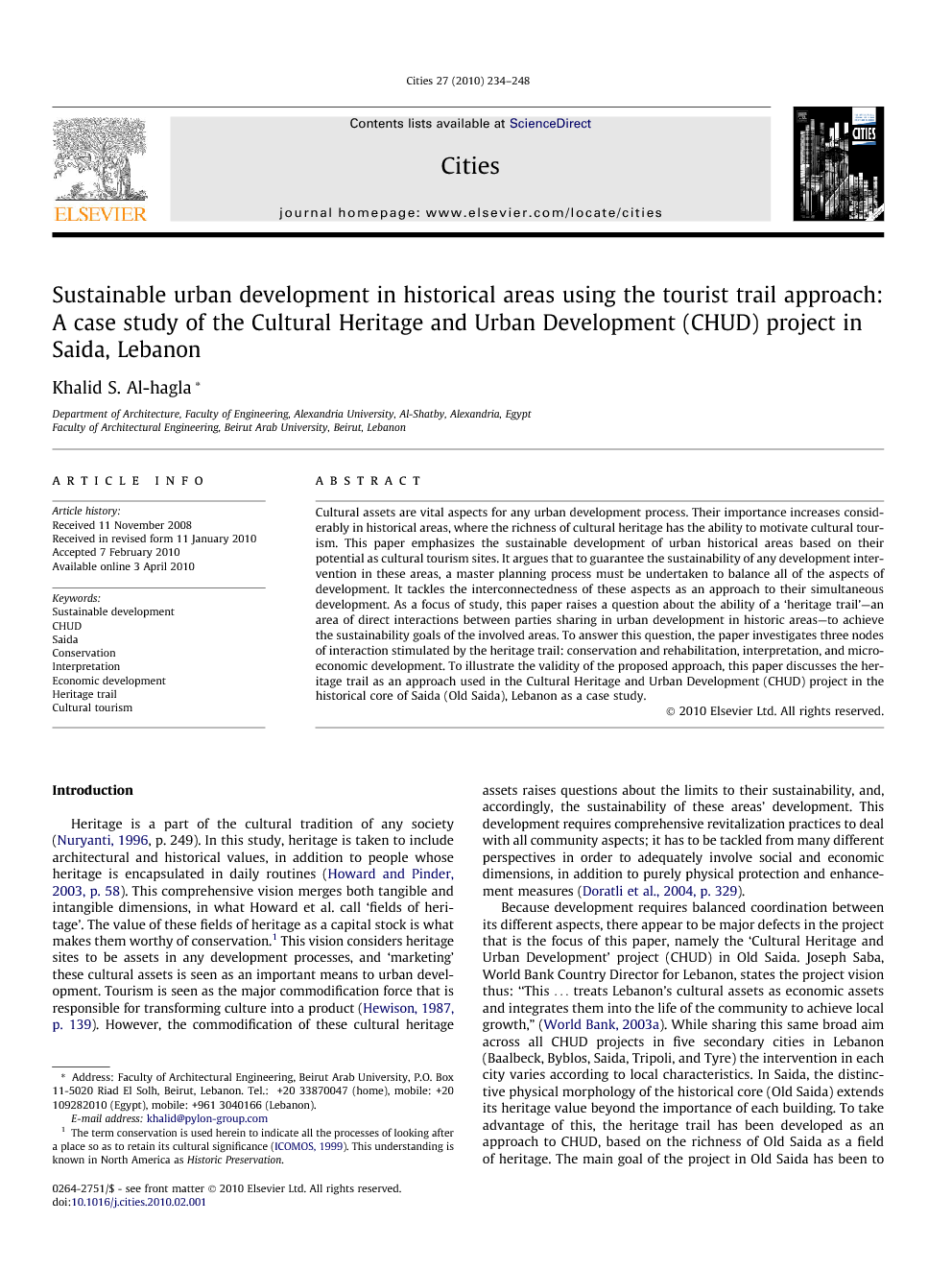 Cultural assets are vital aspects for any urban development process. Their importance increases considerably in historical areas, where the richness of cultural heritage has the ability to motivate cultural tourism. This paper emphasizes the sustainable development of urban historical areas based on their potential as cultural tourism sites. It argues that to guarantee the sustainability of any development intervention in these areas, a master planning process must be undertaken to balance all of the aspects of development. It tackles the interconnectedness of these aspects as an approach to their simultaneous development. As a focus of study, this paper raises a question about the ability of a ‘heritage trail’—an area of direct interactions between parties sharing in urban development in historic areas—to achieve the sustainability goals of the involved areas. To answer this question, the paper investigates three nodes of interaction stimulated by the heritage trail: conservation and rehabilitation, interpretation, and micro-economic development. To illustrate the validity of the proposed approach, this paper discusses the heritage trail as an approach used in the Cultural Heritage and Urban Development (CHUD) project in the historical core of Saida (Old Saida), Lebanon as a case study.

The significance of heritage sites extends beyond the value of their monuments and artifacts. They have to be seen within a broad perspective that relates the physical and non-physical aspects of heritage. All of these aspects of heritage work, as creating community assets, can be utilized to the community’s benefit. Cultural tourism is a domain through which the community can harness its cultural heritage assets because of their ability to attract an increased number of tourists. This commodification of culture shifts it from being a process to a product, which may threaten its continuity. However, the postmodern types of tourism limit these commodification processes and guarantee its sustainability. While these heritage sites depend mainly on cultural tourism for development, the sustainable development of these sites requires a comprehensive vision that uses the results of cultural tourism to feed broader economic and social development. This vision considers the diverse aspects of development and their interdependency as a guarantee of the sustainability of the development. A heritage trail is one tactic that has the ability to relate different development aspects within a comprehensive understanding. It builds on marketing community heritage assets by developing an interactive domain that combines place, tourists, and local people. The interactions of these three players are based on mutual needs that have to be satisfied. Meeting these needs is accomplished through three shared and successive areas of interactions: conservation and rehabilitation practices, heritage interpretation, and local-economic development. To test the theoretical approach laid out at the beginning of the paper, this paper studied the Cultural Heritage and Urban Development (CHUD) project in the historical core of Saida (Old Saida), as an example of a project that uses cultural potential as the basis of urban development in Lebanese historic areas. It correlates the detailed projects applied to Old Saida with CHUD aims and objectives to be achieved in this historical area. A heritage trail is a domain in which place, local people, and tourists are continuously interacting. Its role is to configure different arenas of interaction (conservation and rehabilitation practices, interpretation, and micro-economic development) to meet the needs of those key players. In addition, these areas of interaction are arranged successively, such that any uneven intervention in historical areas undermines their balanced interrelationships. Limiting the conservation and rehabilitation interventions in Old Saida mainly to the historical monuments, rather than all of the residential areas, threatens the existence of local people in the historical core. This in turn affects the intangible heritage of the historical core, and consequently, its interpretation qualities. In addition, the lack of tourist information services and a clear signage system, and the deficiency in related amenities and landscaping elements along the proposed trail are responsible for tourists’ dissatisfaction with the interpretation. This was reflected in a decreased rank given by tourists who were visiting on their own compared with visitors with tour operators and tourists who had visited the city before compared with visitors who were visiting the city for the first-time. This will negatively affect the number of tourists in the long run, decreasing the local micro-economic development. Moreover, assessment of the micro-economic impact of the CHUD project shows that a number of H&T activities (mainly within the manufacturing sector) are threatened due to their low profitability, in spite of their importance as authentic history, adding to the heritage value of Old Saida. A number of national bottlenecks are also clearly evident in Saida’s historic core. Technical and bureaucratic complexities and prohibitive financial costs discourage owners and tenants alike from investing in the restoration of historic structures. Current property and rent laws further compound these problems, rendering the restoration of old properties almost impossible. What is more, the presentation, promotion and appreciation of cultural heritage and archaeological sites are characterized by overlapping mandates and a lack of effective coordination between the major stakeholders, including the DGA, MOT, and local municipalities.