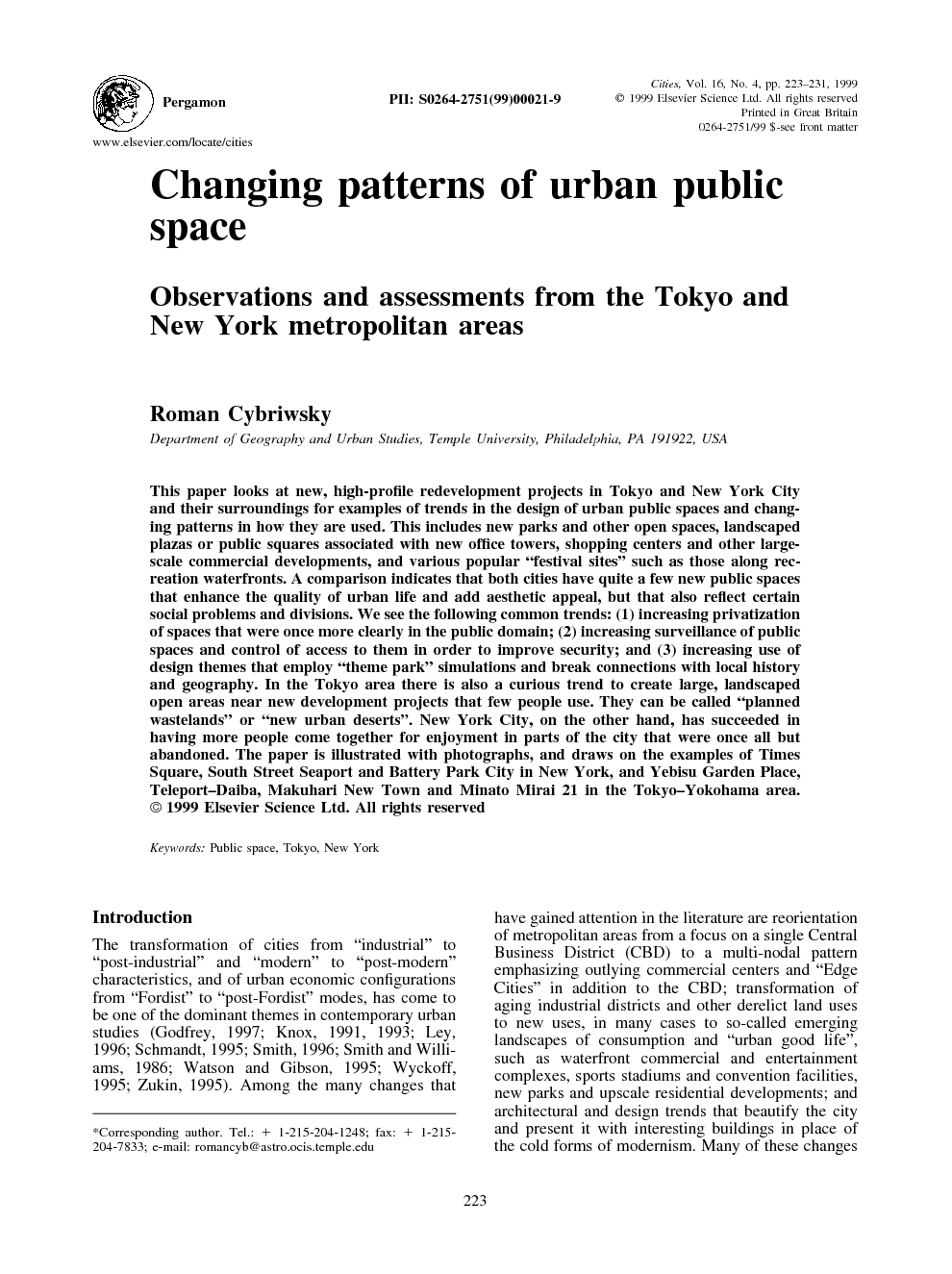 This paper looks at new, high-profile redevelopment projects in Tokyo and New York City and their surroundings for examples of trends in the design of urban public spaces and changing patterns in how they are used. This includes new parks and other open spaces, landscaped plazas or public squares associated with new office towers, shopping centers and other large-scale commercial developments, and various popular “festival sites” such as those along recreation waterfronts. A comparison indicates that both cities have quite a few new public spaces that enhance the quality of urban life and add aesthetic appeal, but that also reflect certain social problems and divisions. We see the following common trends: (1) increasing privatization of spaces that were once more clearly in the public domain; (2) increasing surveillance of public spaces and control of access to them in order to improve security; and (3) increasing use of design themes that employ “theme park” simulations and break connections with local history and geography. In the Tokyo area there is also a curious trend to create large, landscaped open areas near new development projects that few people use. They can be called “planned wastelands” or “new urban deserts”. New York City, on the other hand, has succeeded in having more people come together for enjoyment in parts of the city that were once all but abandoned. The paper is illustrated with photographs, and draws on the examples of Times Square, South Street Seaport and Battery Park City in New York, and Yebisu Garden Place, Teleport–Daiba, Makuhari New Town and Minato Mirai 21 in the Tokyo–Yokohama area.

The objective of this paper was to compare New York City and the Tokyo area in terms of public space at major new development sites. It has addressed questions of urban quality of life by looking at the provision and design of prominent spaces for public use, and at some details about how these spaces are used. We have seen that despite the obvious differences between the cities in cultural settings, history and other factors, there are at least three important areas of similarity in new public spaces: more control by private interests; more surveillance; and playful design. Increased private control and surveillance can be considered as reflecting the presence of various urban social problems and reduced quality of urban life. The playful design characteristic does not seem to relate as directly to quality of life questions. The finding of three areas of similarity in public space between Tokyo and New York corresponds to observations in academic and planning literature about other cities, and reflects the ever smaller, more internationalized and more homogeneous world in which we live. We have also seen some curious differences between Tokyo and New York in public space, reflecting the different experiences of those cities. Tokyo, it seems, has added some dead spaces to what has always been lively and crowded city, while New York, once said to be moribund, has come alive and has new public spaces that reflect new health and vitality. It would be interesting to continue tracking these developments to study the successes and shortcomings of these two globally important cities.