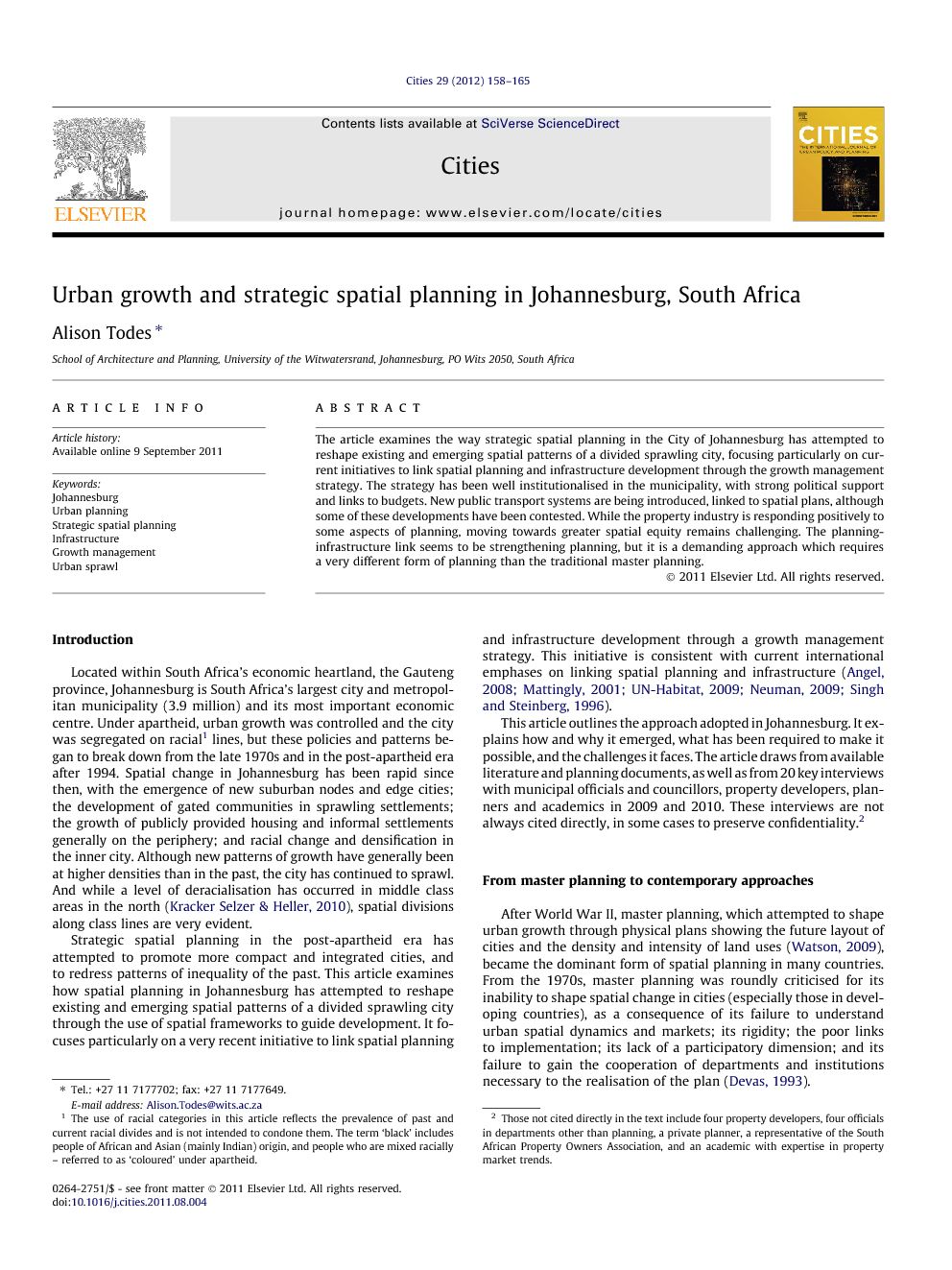 The article examines the way strategic spatial planning in the City of Johannesburg has attempted to reshape existing and emerging spatial patterns of a divided sprawling city, focusing particularly on current initiatives to link spatial planning and infrastructure development through the growth management strategy. The strategy has been well institutionalised in the municipality, with strong political support and links to budgets. New public transport systems are being introduced, linked to spatial plans, although some of these developments have been contested. While the property industry is responding positively to some aspects of planning, moving towards greater spatial equity remains challenging. The planning-infrastructure link seems to be strengthening planning, but it is a demanding approach which requires a very different form of planning than the traditional master planning.

Located within South Africa’s economic heartland, the Gauteng province, Johannesburg is South Africa’s largest city and metropolitan municipality (3.9 million) and its most important economic centre. Under apartheid, urban growth was controlled and the city was segregated on racial1 lines, but these policies and patterns began to break down from the late 1970s and in the post-apartheid era after 1994. Spatial change in Johannesburg has been rapid since then, with the emergence of new suburban nodes and edge cities; the development of gated communities in sprawling settlements; the growth of publicly provided housing and informal settlements generally on the periphery; and racial change and densification in the inner city. Although new patterns of growth have generally been at higher densities than in the past, the city has continued to sprawl. And while a level of deracialisation has occurred in middle class areas in the north (Kracker Selzer & Heller, 2010), spatial divisions along class lines are very evident. Strategic spatial planning in the post-apartheid era has attempted to promote more compact and integrated cities, and to redress patterns of inequality of the past. This article examines how spatial planning in Johannesburg has attempted to reshape existing and emerging spatial patterns of a divided sprawling city through the use of spatial frameworks to guide development. It focuses particularly on a very recent initiative to link spatial planning and infrastructure development through a growth management strategy. This initiative is consistent with current international emphases on linking spatial planning and infrastructure (Angel, 2008, Mattingly, 2001, UN-Habitat, 2009, Neuman, 2009 and Singh and Steinberg, 1996). This article outlines the approach adopted in Johannesburg. It explains how and why it emerged, what has been required to make it possible, and the challenges it faces. The article draws from available literature and planning documents, as well as from 20 key interviews with municipal officials and councillors, property developers, planners and academics in 2009 and 2010. These interviews are not always cited directly, in some cases to preserve confidentiality.2

Johannesburg’s spatial planning has been innovative in many respects. It has moved away from master planning approaches towards strategic spatial planning, grounded through a strong link to infrastructure development. It has recognised that current patterns of property development are both unsustainable and unjust, and it is attempting to restructure the city. At the same time however, it is recognised that property development is a significant industry in the city (COJ, 2010), important to the rates base. Hence, while the GMS is far more directive than previous plans, it remains facilitative. As demonstrated in the previous section, there has been some progress with SDF strategies but there is resistance by much of the property industry to more radical intentions to incorporate inclusive housing into well-located areas in the north, or to invest significantly in non-residential development in marginalised areas (COJ, 2010).11 Strong levels of public sector infrastructure investment in marginalised areas have been the main form of redress. It is an open question as to whether this approach will over the long-term undermine levels of maintenance and the quality of infrastructure in the north. Balancing these various claims remains a challenge for planning. If both growth and equity objectives are to be achieved, it will be critical to increase levels of investment in basic infrastructure. In Johannesburg, the link between infrastructure and spatial planning seems to be strengthening the position of planning. It has enabled better integration within the municipality around the objectives of the SDF, and this is likely to be improved further by the devolution of housing and transport functions to the municipal level (SACN, 2011). It has also given planners stronger levers in relation to property development, and a much better link to implementation. However, more needs to be done to improve co-ordination within the municipality and across spheres of government, especially around the creation of sustainable living environments. Greater engagement with the property industry might also generate deeper understandings of market dynamics and constructive ways of moving towards Johannesburg’s strategic objectives. It is apparent that the spatial planning-infrastructure link is not a panacea or an easy solution. In the case of Johannesburg, the consolidation of policy and the position of planning have been made possible by a consistent and supportive local political regime, but this is relatively unusual internationally. It has required extensive engagement with actors within and outside of the municipality, which is demanding in terms of municipal capacity. In addition, key aspects of the link – in particular the establishment of the BRT- has been conflictual and contested. Planning also has to deal with other departments, which have different agendas, and with a private property market which in several respects is moving in different directions. Hence, while the new form of spatial planning and the link to infrastructure is promising, it is a demanding approach which requires a very different form of planning than traditional master planning.