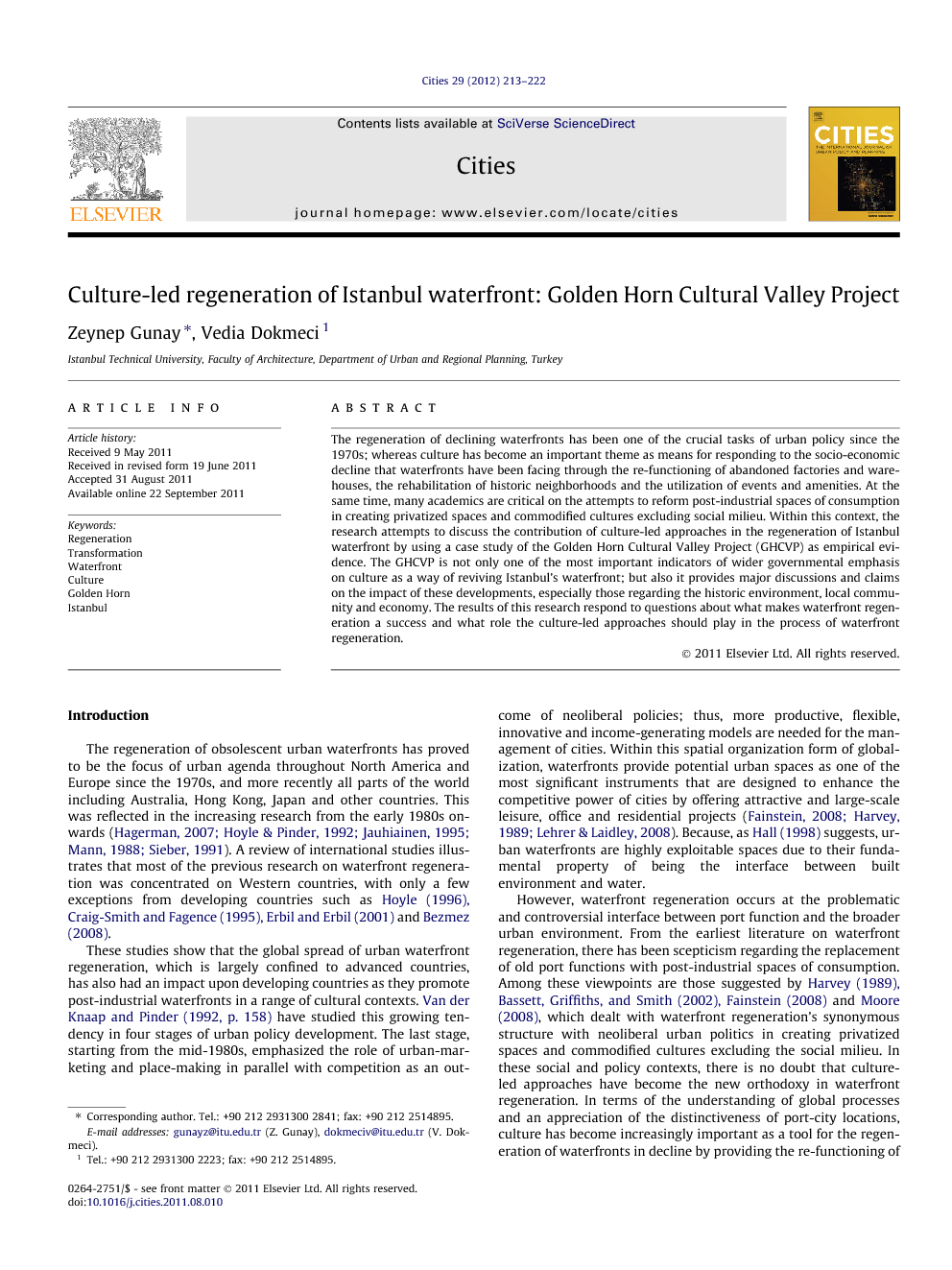 The regeneration of declining waterfronts has been one of the crucial tasks of urban policy since the 1970s; whereas culture has become an important theme as means for responding to the socio-economic decline that waterfronts have been facing through the re-functioning of abandoned factories and warehouses, the rehabilitation of historic neighborhoods and the utilization of events and amenities. At the same time, many academics are critical on the attempts to reform post-industrial spaces of consumption in creating privatized spaces and commodified cultures excluding social milieu. Within this context, the research attempts to discuss the contribution of culture-led approaches in the regeneration of Istanbul waterfront by using a case study of the Golden Horn Cultural Valley Project (GHCVP) as empirical evidence. The GHCVP is not only one of the most important indicators of wider governmental emphasis on culture as a way of reviving Istanbul’s waterfront; but also it provides major discussions and claims on the impact of these developments, especially those regarding the historic environment, local community and economy. The results of this research respond to questions about what makes waterfront regeneration a success and what role the culture-led approaches should play in the process of waterfront regeneration.

The regeneration of obsolescent urban waterfronts has proved to be the focus of urban agenda throughout North America and Europe since the 1970s, and more recently all parts of the world including Australia, Hong Kong, Japan and other countries. This was reflected in the increasing research from the early 1980s onwards (Hagerman, 2007, Hoyle and Pinder, 1992, Jauhiainen, 1995, Mann, 1988 and Sieber, 1991). A review of international studies illustrates that most of the previous research on waterfront regeneration was concentrated on Western countries, with only a few exceptions from developing countries such as Hoyle, 1996, Craig-Smith and Fagence, 1995 and Erbil and Erbil, 2001 and Bezmez (2008). These studies show that the global spread of urban waterfront regeneration, which is largely confined to advanced countries, has also had an impact upon developing countries as they promote post-industrial waterfronts in a range of cultural contexts. Van der Knaap and Pinder (1992, p. 158) have studied this growing tendency in four stages of urban policy development. The last stage, starting from the mid-1980s, emphasized the role of urban-marketing and place-making in parallel with competition as an outcome of neoliberal policies; thus, more productive, flexible, innovative and income-generating models are needed for the management of cities. Within this spatial organization form of globalization, waterfronts provide potential urban spaces as one of the most significant instruments that are designed to enhance the competitive power of cities by offering attractive and large-scale leisure, office and residential projects (Fainstein, 2008, Harvey, 1989 and Lehrer and Laidley, 2008). Because, as Hall (1998) suggests, urban waterfronts are highly exploitable spaces due to their fundamental property of being the interface between built environment and water. However, waterfront regeneration occurs at the problematic and controversial interface between port function and the broader urban environment. From the earliest literature on waterfront regeneration, there has been scepticism regarding the replacement of old port functions with post-industrial spaces of consumption. Among these viewpoints are those suggested by Harvey, 1989, Bassett et al., 2002 and Fainstein, 2008 and Moore (2008), which dealt with waterfront regeneration’s synonymous structure with neoliberal urban politics in creating privatized spaces and commodified cultures excluding the social milieu. In these social and policy contexts, there is no doubt that culture-led approaches have become the new orthodoxy in waterfront regeneration. In terms of the understanding of global processes and an appreciation of the distinctiveness of port-city locations, culture has become increasingly important as a tool for the regeneration of waterfronts in decline by providing the re-functioning of abandoned factories and warehouses, the rehabilitation of historic neighborhoods and the utilization of events and amenities that would make waterfronts more attractive to mobile capital (Craig-Smith and Fagence, 1995, Evans, 2005 and Hall, 1998). Within this context, the aim of the research is to discuss the contribution of culture-led approaches in the regeneration of Istanbul waterfront with a case study of the Golden Horn Cultural Valley Project (GHCVP) as empirical evidence. The Golden Horn was selected as a case study area for being a space where culture has been both produced and consumed throughout its history. It has been undergoing a transformation process from an ignored and polluted industrial center to becoming the cultural center of a growing global city. This, on one hand, helped in regenerating Istanbul from a tired city whose glory resided in the past history into a newly-imaged metropolis (Keyder & Oncu, 1994); on the other hand, these “cleaning” projects have swept away historic waterfront neighborhoods (Akin, 1994a). Regeneration measures gained a new pace after the late 1990s and it has once more become the central focus for city governments in the need of creating a world city image for Istanbul and increasing competitive advantage in the new global order. In particular, the GHCVP is a product of this envisioning process. It is the most comprehensive culture-led approach since the inclusion of cultural policies in broader development strategies through the Five-Year Development Plans since the 1960s. It is not only one of the most important indicators of wider governmental emphasis on culture, as a way of reviving Istanbul’s waterfront areas (GIM, 2009 and GIM, 2010); but is also a laboratory for providing an opportunity for major discussions and claims on the impact of these developments, especially those regarding the historic environment, local community and economy among academia, community groups and media (Bezmez, 2008, Birgun, 2011, FEBAYDER, 2011 and UNESCO/WHC, 2009). Bearing in mind these fundamentals, this research first contributes to the discussion about increasing role of culture-led approaches in waterfront regeneration. Secondly, it gives brief information on the regeneration of the Golden Horn from a natural port to a cultural valley by focusing on the GHCVP. A comparative framework is used to assess the physical and socio-economic implications of the Project through the presentation of academic discourses, media depictions and interviews to counterbalance the lack of quantitative data. The final section is devoted to conclusion and suggestions for further research. The results of this research respond to questions about what makes waterfront regeneration a success and what role culture-led approaches should play in the process of waterfront regeneration.

There is an increasing trend to put culture at the heart of urban transformation projects in Turkey, and the Golden Horn is part of a wider governmental emphasis on culture and culture-led approaches as a way of reviving the post-industrial areas of Istanbul. This research has shown that the Golden Horn waterfront regeneration, from a natural port to a cultural valley, occurs at the problematic and controversial interface between industrial function and the broader urban environment. Waterfronts are important resources for creating economic boosters such as tourism, business development and inward investment; and culture may provide a profitable and powerful instrument for city governments to acquire a competitive advantage in a world marked by globalization. However, as illustrated in this article, culture-led approaches can act as a driving force within urban development agenda only if they are integrated with other urban policies. The scepticism in the existing literature has also been the main foci of the challenges facing the GHCVP regarding the replacement of historic waterfront neighborhoods, industrial facilities and public open spaces with post-industrial spaces of consumption. As this research suggests, the waterfront regeneration efforts in the Golden Horn may lead to the growth and expansion of the culture of capitalism and thus the commodification of culture; even though it is a major attempt to improve the image of the Golden Horn. It has been argued in the research that the degree to which culture-led approaches succeed depends on how well they engage with local communities and identities. To maximize the benefits, there is a need to balance cultural production and consumption, to make culture accessible to the community and attractive to visitors, and to generate vibrancy to draw the interest of potential stakeholders. Keeping in mind Evans’ (2005) categorization, it is important to employ a shift from culture-led regeneration to cultural regeneration by resolving potential conflicts by careful management involving place identity and distinctiveness, community interests and value assessment. This study will hopefully bring further attention to the regeneration of historic waterfronts in Turkey and other developing countries. Further research, however, is needed to fully analyze the economic and social impact of these developments. It is crucial that such studies include a detailed analysis of the community’s interests and expectations in nearby areas. This type of information should provide the much needed context for the development of more efficient strategies to guide culture-led regeneration approaches in the future.