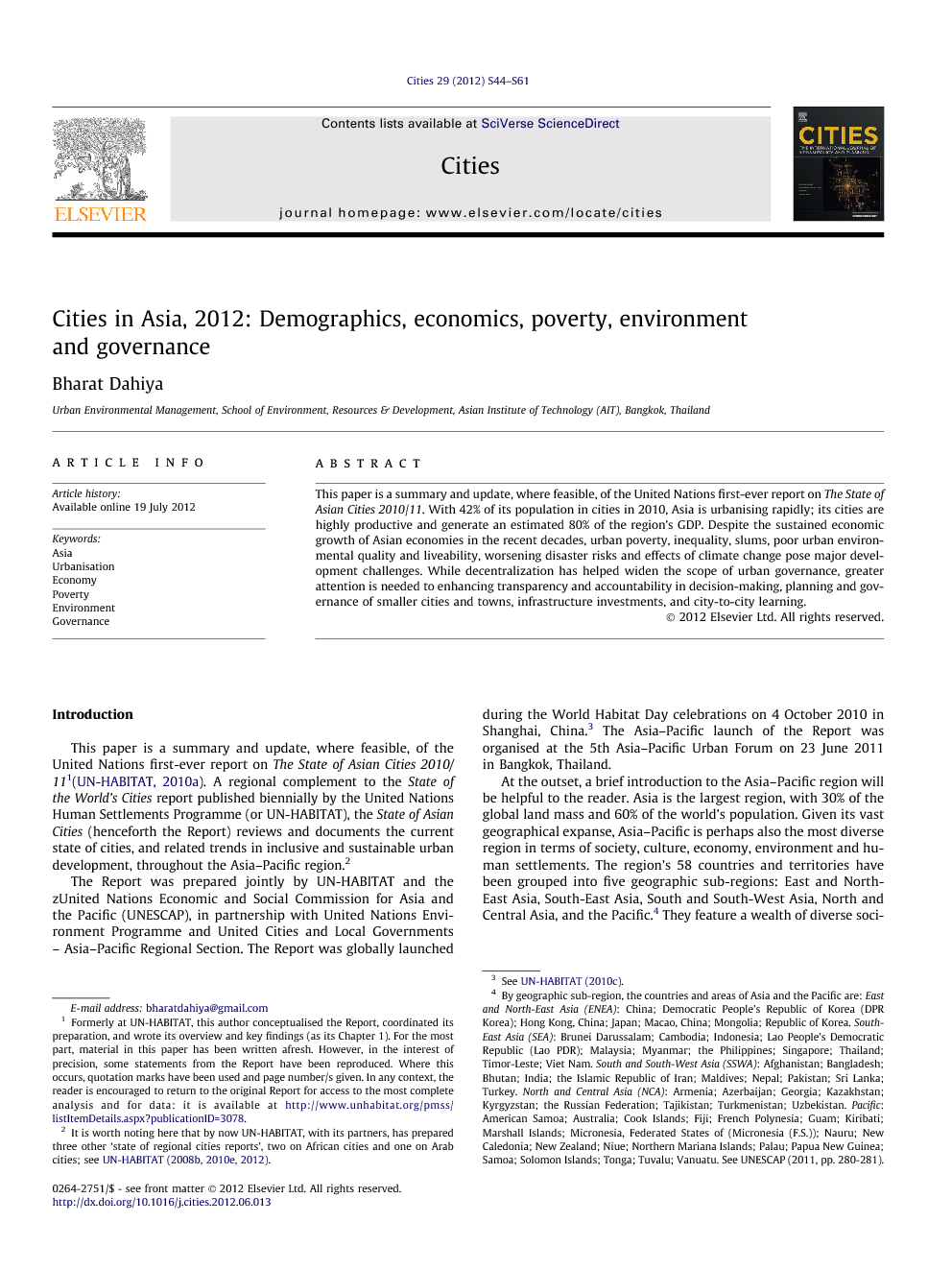 This paper is a summary and update, where feasible, of the United Nations first-ever report on The State of Asian Cities 2010/11. With 42% of its population in cities in 2010, Asia is urbanising rapidly; its cities are highly productive and generate an estimated 80% of the region’s GDP. Despite the sustained economic growth of Asian economies in the recent decades, urban poverty, inequality, slums, poor urban environmental quality and liveablity, worsening disaster risks and effects of climate change pose major development challenges. While decentralization has helped widen the scope of urban governance, greater attention is needed to enhancing transparency and accountability in decision-making, planning and governance of smaller cities and towns, infrastructure investments, and city-to-city learning.

This paper is a summary and update, where feasible, of the United Nations first-ever report on The State of Asian Cities 2010/111 (UN-HABITAT, 2010a). A regional complement to the State of the World’s Cities report published biennially by the United Nations Human Settlements Programme (or UN-HABITAT), the State of Asian Cities (henceforth the Report) reviews and documents the current state of cities, and related trends in inclusive and sustainable urban development, throughout the Asia–Pacific region.2 The Report was prepared jointly by UN-HABITAT and the United Nations Economic and Social Commission for Asia and the Pacific (UNESCAP), in partnership with United Nations Environment Programme and United Cities and Local Governments – Asia–Pacific Regional Section. The Report was globally launched during the World Habitat Day celebrations on 4 October 2010 in Shanghai, China.3 The Asia–Pacific launch of the Report was organised at the 5th Asia–Pacific Urban Forum on 23 June 2011 in Bangkok, Thailand. At the outset, a brief introduction to the Asia–Pacific region will be helpful to the reader. Asia is the largest region, with 30% of the global land mass and 60% of the world’s population. Given its vast geographical expanse, Asia–Pacific is perhaps also the most diverse region in terms of society, culture, economy, environment and human settlements. The region’s 58 countries and territories have been grouped into five geographic sub-regions: East and North-East Asia, South-East Asia, South and South-West Asia, North and Central Asia, and the Pacific.4 They feature a wealth of diverse societies and rich cultures that are rooted in its long history. In terms of economic development, the Asia–Pacific region is constituted of low-, lower-middle, upper-middle and high-income economies,5 and its natural environment shows a varied picture, with tropical and temperate climes, and some of the world’s most arid and water-rich biomes, not to mention the tallest mountain systems (the Himalayas), the Tibetan and Deccan plateaux, and the gigantic valleys and deltas of the Brahmaputra, Chao Phraya, Ganges, Indus, Irrawaddy, Mekong, Narmada, Red, Yangtze and Yellow rivers, to name a few. With regard to human settlements, Asia–Pacific is host to highly urbanised countries such as Australia, Japan and Singapore, and others much less urbanised, such as Cambodia, Papua New Guinea and Sri Lanka (see Fig. 1). In reviewing and documenting the current state of cities, and trends in inclusive and sustainable urban development in the Asia–Pacific region, the Report makes use of the latest information available, and includes a selection of good practices and examples in boxed items, and a short statistical annex. The preparation of the Report has also drawn on the rich knowledge of a broad range of specialists, and peer reviews by experts. The Report uses the urban demographic data from the World Urbanization Prospects 2009 (United Nations, 2010) and socio-economic and other data from a variety of sources. A short Statistical Annex includes selected latest data on: urban demography from the World Urbanization Prospects 2009; slums and related issues from the State of the World’s Cities 2010/2011 report (UN-HABITAT, 2010b); and urban water and sanitation coverage from the 2010 Update of the Joint Monitoring Programme for Water Supply and Sanitation (WHO & UNICEF, 2010). The Report is divided into six chapters. Chapter 1 presents an overview and key findings (written by this author). Chapters 2–6 focus on demographic trends, economy, poverty and inequality, urban environment and climate change, and urban governance, management and finance in Asian and Pacific cities. To aid the reader, these five chapters also feature a list of ‘quick facts’ and ‘policy points’. In the following five sections of this paper, the key findings of the Report’s Chapters 2–6 have been summarised. The last section provides a perspective on the future of Asian cities.

Asia has seen rapid urbanisation but has also witnessed ‘the urbanisation of poverty’ and rising inequality. This is manifested in an inability to pay for basic services such as water supply, sanitation, waste collection, health, energy and transportation (reviewed in the Report), which – along with education – are fundamental requirements for a sustainable existence. Legal barriers (the lack of a birth certificate, permits, or land tenure) also restrict household opportunities. All stakeholders in governance must take up the burden of providing basic services and access to the components of a complex urban existence for all, regardless of their level of education and economic situation. Although Asia has helped achieve the MDG target on slums, its cities house 505.5 million slum dwellers – more than any other developing region. Pro-poor land and housing policies and programmes will go a long way in addressing the problems related to the proliferation of slums. Asian cities will benefit further from the citywide pro-poor approaches, such as the ‘people’s process of housing and upgrading’ that has been pioneered in the region. At the same time as they promote economic development, Asian cities must resist the temptation to do so entirely at the expense of the natural resource base. Thus, a focus on meeting human needs and improving well-being with the lowest possible ecological cost is more relevant to Asia–Pacific than to other regions (UNESCAP, 2008b). To address the existing environmental problems, better urban environmental planning and management will be needed. Improved environmental management in Asian cities will help reduce premature deaths caused by air pollution. Water and wastewater management will be necessary to prevent further contamination of water resources and meet increasing demand. Concerted efforts to improve solid waste and wastewater management will require a clear focus on technical, institutional and financial aspects. As Asia faces increasing disaster risks and effects of climate change, cities will gain from improved technical capacities and practical action on climate change adaptation. And like cities in developed (and in other developing regions), Asian cities will benefit from reductions in greenhouse gas emissions. In the past two decades, Asia has seen the widening of the scope of urban governance, which has led to the involvement of stakeholders such as civil society and community-based organizations, NGOs, academia, and the private sector in decision-making. Although many cities are adopting and implementing principles of good governance, a lot more needs to be done with regard to improving transparency and accountability, especially to control corrupt practices. In the coming decades, there will be further expansion of e-governance, which will help bring further improvements in urban decision-making and management. While larger cities have been foci of attention for policymakers, the challenge of planning and governance of towns and smaller cities is a major one, and national governments will need to make greater efforts if these settlements are to meet development goals. In this process, the utilisation of the various avenues of financing urban development will need to be further explored, including local revenue sources, property-based taxes, domestic and foreign borrowings, private sector participation in and/or privatisation of urban infrastructure and services, and land as a resource for development. Moreover, local government associations, both at regional- and national-level, will need to strengthen their efforts in order to support their members and partners in their quest for good governance.